Track_2017-07-08 163118.gpx Open full screen  NB: Walkhighlands is not responsible for the accuracy of gpx files in users posts

There's more than one excellent horseshoe route available from Newlands. The most well known is the circuit of the valley from Catbells to Hindscarth and Scope End. Another is the Keskadale round traversing Newlands Hause, from Robinson to Ard Crags, a walk I did with pamfox last year. Usually I've done these rounds clockwise, to take Scope End downhill for the views, and to take High Snab Bank (Robinson) uphill. The double horseshoe I'd planned omitted these two sections, so I went anti-clockwise for variety. On a pleasant sunny day, this proved to be a perfectly doable walk.

I parked at Little Town, and made the short road walk to Rigg Beck, and took the path towards Ard Crags. 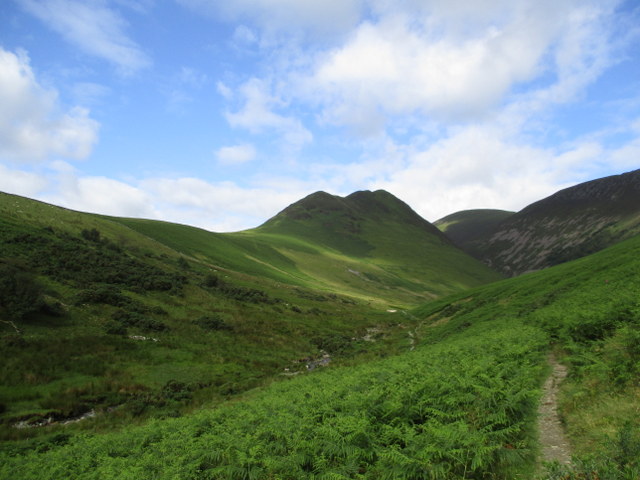 It was a nice climb over Aikin Knott and onto Ard Crags to get the circuit started. 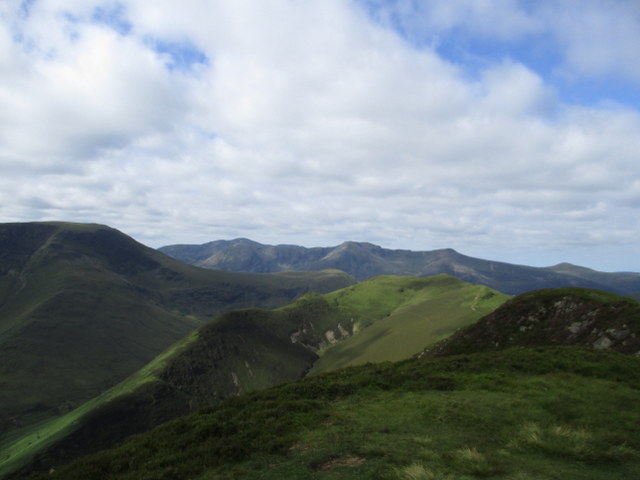 Moving along to Knott Rigg, it was still quite early, and these hills were very quiet. Coming down towards Newlands Hause, I first began to encounter people. 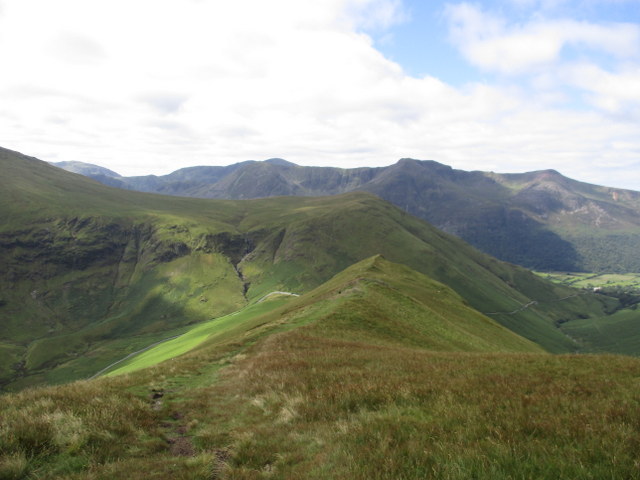 Dropping to Newlands Hause, Moss Force in the background

As might be expected, a sunny Saturday was making Lakeland very popular. There's still no need for a pedestrian crossing at Newlands Hause, though, and soon I was ascending near Moss Beck. Robinson from near Moss Force Looking back along Keskadale to Blencathra, from near Moss Force

I made the detour to High Snockrigg. This is a flat-topped, grassy hill, but with good views. Buttermere Moss was now directly between me and Robinson. A few other walkers were also having fun with this notorious marsh, but before long it was painlessly crossed. Then came the final pull up onto the Wainwright called Robinson. The third Wainwright summit of the day was reached, with quite a number of other people around to chat to, before setting off for the journey to Hindscarth. Wainwright number four was duly reached, and the main circuit of the Newlands Horseshoe joined, as I moved around towards Dale Head. 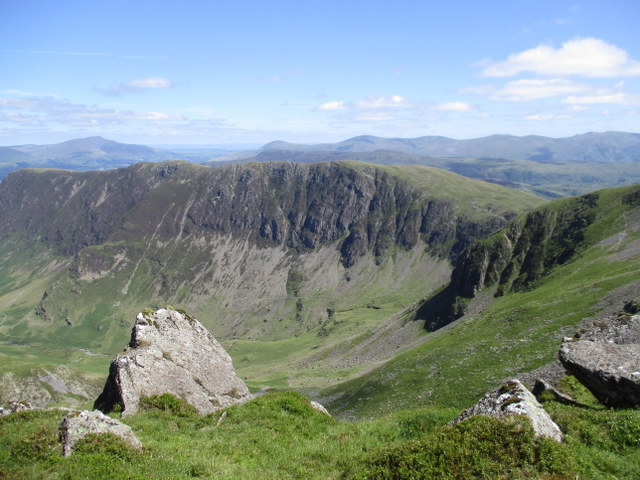 Approaching Dale Head, looking over to High Spy (Blencathra and Helvellyn in the background)

The day's high point was reached, and I had plenty of company. Conditions were ideal; clear with pleasant sunshine, but not too hot. Looking along Newlands Valley to Skiddaw from Dale Head

Next I set off towards Dalehead Tarn, down the path that's a bit of a slog when doing the horseshoe the other way round. 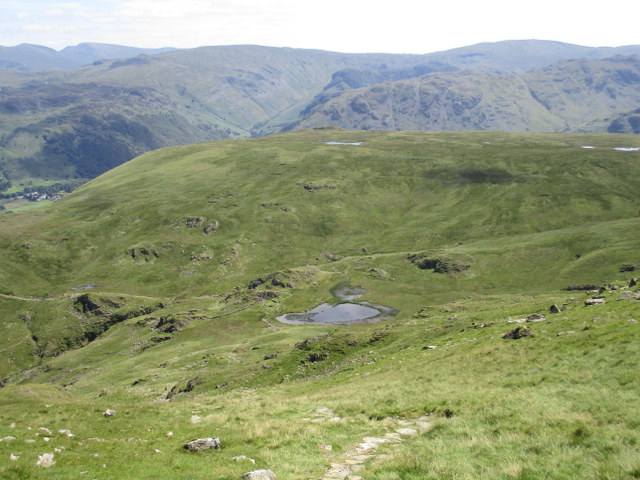 On reaching Dalehead Tarn it was apparent that the weather had really brought out the crowds. I made the turn left and uphill towards High Spy. At nine years old, this had been the first 2000 foot mountain I'd climbed. It had also been a clear, sunny day on this summit back on that first visit with my dad. I could still remember some of the views from then. 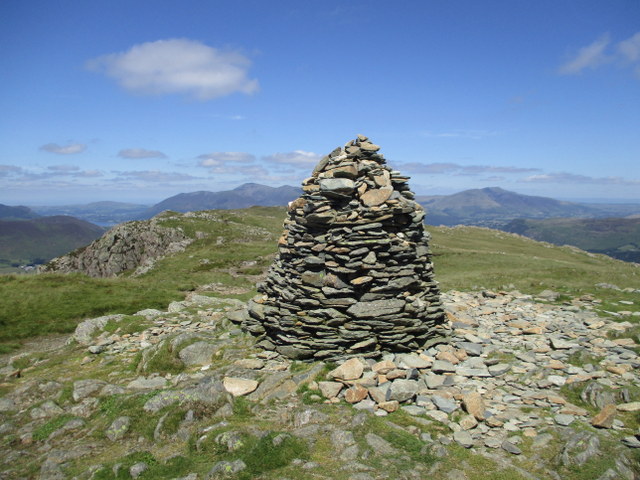 High Spy's big cairn was left behind and a detour to another cairn, on Blea Crag, was made. This is always worth doing on this route when the view is there to be had. A detour is also necessary from the main path to visit Maiden Moor, even though it is a Wainwright, and the views from the escarpment thus followed are good ones. 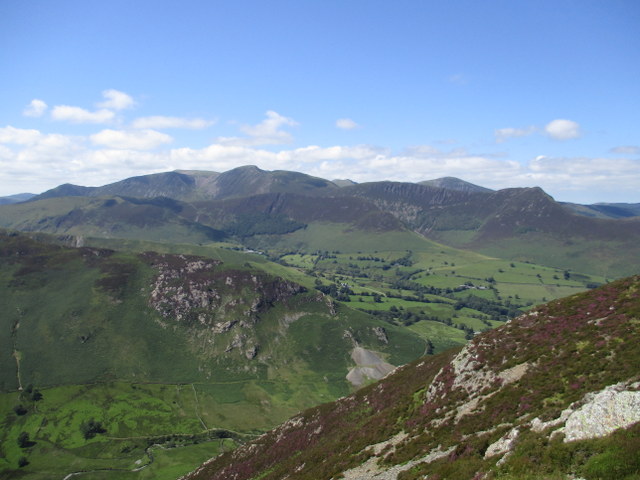 Grasmoor range from near Maiden Moor

Moving on from Maiden Moor's flat top, I headed down towards Hause Gate. Moving towards Catbells from Maiden Moor

It could be seen from a distance that the summit of Catbells was thronging with people. It is a lovely little hill, and you can't blame all those folk for wanting to be there on a day like this. There was still room for me to touch the highest point when I arrived to claim my eighth and final Wainwright of the day. Hindscarth and Robinson from Catbells

Then it was time for the last descent of the route. Coming down from Catbells Descending back to Newlands Valley, looking across to Causey Pike

Eventually I was back on the road in Newlands Valley, and it was clear that you don't always have to be on the tops for great scenery. Returning towards Little Town, with a last look at Hindscarth, Scope End and Robinson.

Back at the car park, I put the loose change in the honesty box; something I'd forgotten to do in the morning. It's a good job it wasn't a ticket machine.

Wonderful fells in that area Simon making for a great full day in the fells, not often you walk over nine tops where every one has outstanding views.

Whoa! What a great walk with some fine pics there Simon-b

something that I have been missing lately

Well done on a great and different circuit of Newlands

johnkaysleftleg wrote:Wonderful fells in that area Simon making for a great full day in the fells, not often you walk over nine tops where every one has outstanding views.

Cheers Anthony. The views from a tenth top (according to Bill Birkett), Ill Crag just before Knott Rigg, weren't bad either.

something that I have been missing lately

Well done on a great and different circuit of Newlands

Thanks, trailmasher, and yes, it was nice to catch some weather like that.

hey simon, looks like you got a great day for this "horseshoe" I did the same walk, in the opposite direction, in April. Very enjoyable

mamoset wrote:hey simon, looks like you got a great day for this "horseshoe" I did the same walk, in the opposite direction, in April. Very enjoyable

Thanks mamoset. I'm not surprised someone else thought of combining these hills like this, whichever way round.

mamoset wrote:hey simon, looks like you got a great day for this "horseshoe" I did the same walk, in the opposite direction, in April. Very enjoyable

Thanks mamoset. I'm not surprised someone else thought of combining these hills like this, whichever way round.

What a great horseshoe. I did the majority of those fells recently (some twice) but never thought to string them together like that and am kicking myself for it now.