The weather forecast suggested that if there was any good weather to be had then it was near the coast and early in the day. So an early start it was and I'd got my boots on and was out the car by 7:15am. 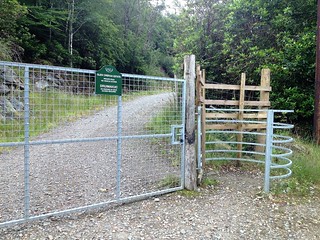 The gate at the start of the walk is rather imposing and reminded me of the film Jurassic Park; what dangerous beasts are they trying to contain?

No sooner had I gone through this gate than another similarly imposing gate also has to be gone through. 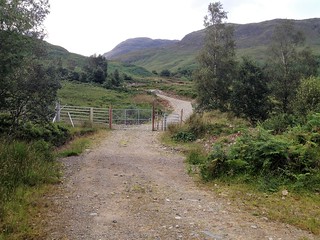 Height is quickly gained on the landrover track and I hoped that the early views over Loch Creran were a foretaste of what was to come. 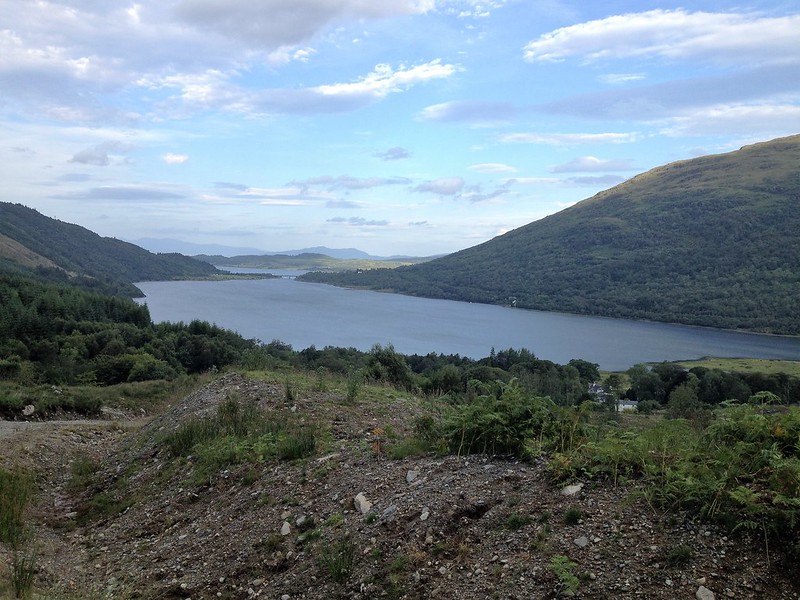 The Walkhighlands report notes that there is a wee cairn that marks when to leave the main track and start to head up the hill. Despite keeping an eye out for the cairn I missed it and continued on the track until I could see a fence head up the hill. 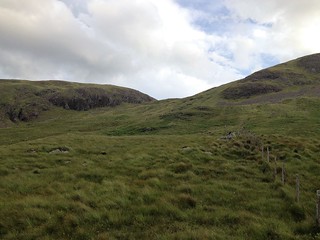 The grass was not too long and underfoot not too boggy, so it was as good a way as any to get up onto the shoulder of Meall Garbh. It reminded me of a comment of Cameron McNeish, In relation to Schiehallion he regales who his friend Hamish Brown stated that "he wished people would begin to act more like goats than sheep. He was criticising the fact that everyone tended to climb hills by the same route, rather than discover their own way to the summits". Missing the start of the path meant that for today at least I was going to be an old goat and not a sheep. 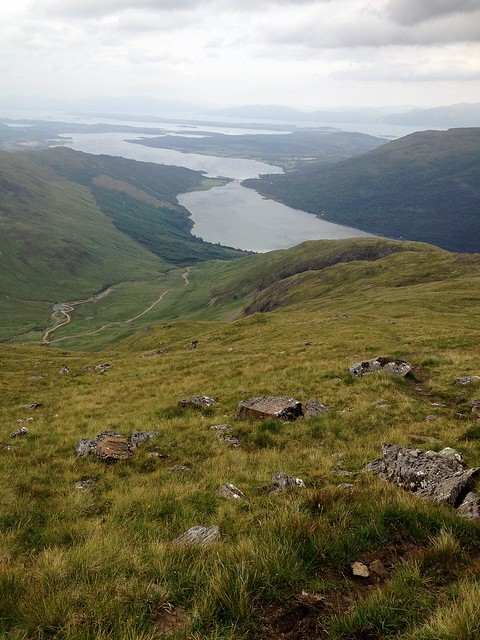 My route up started just after where you can see the two tracks meet.

The day was still reasonably clear when I reach the first cairn of the day at 863m. 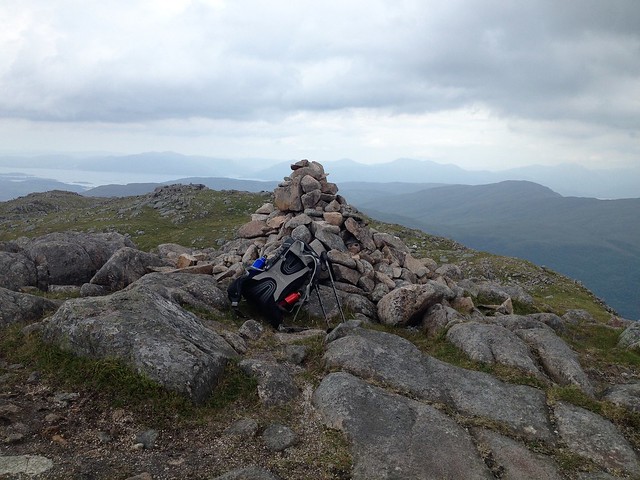 However, from this point in the wind really picked up and there where sustained gusts that just about blew my feet away from me. 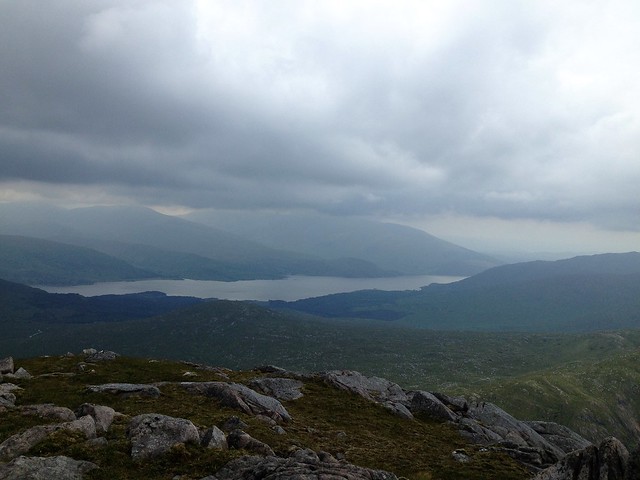 Not only were there great views of Loch Creran, but also of Loch Etive.

From the top of Meall Garbh the summit of Sgulaird seemed quite far away. 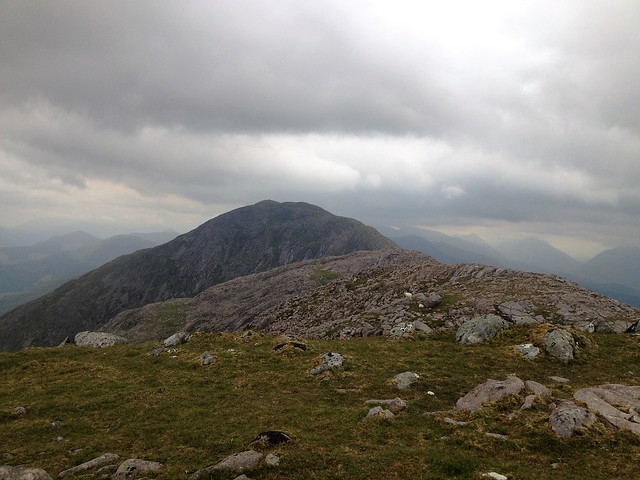 Keeping to the theme of being a goat and not a sheep I only loosely followed the path to the beallach and there was some enjoyable simple scrambling down some boulders before starting the ascent of Sgulaird itself. 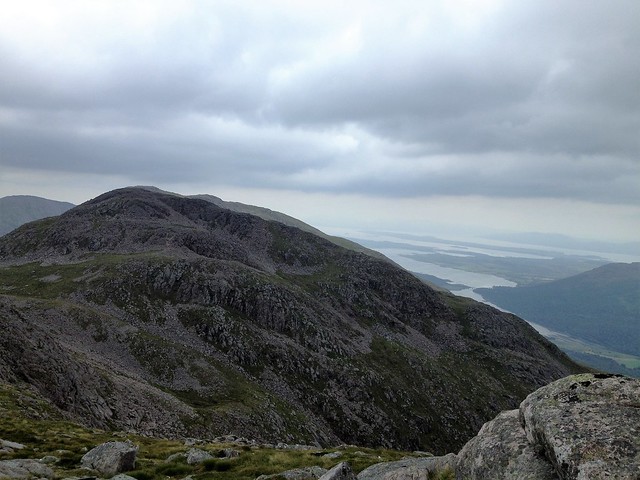 Looking back to Meall Garbh and the boulder strewn face I'd come down.

As I got closer to the summit the dark clouds that were hiding Beinn Fhionnlaidh stared to shed some light rain my direction, but fortunately the summit remained cloud free. 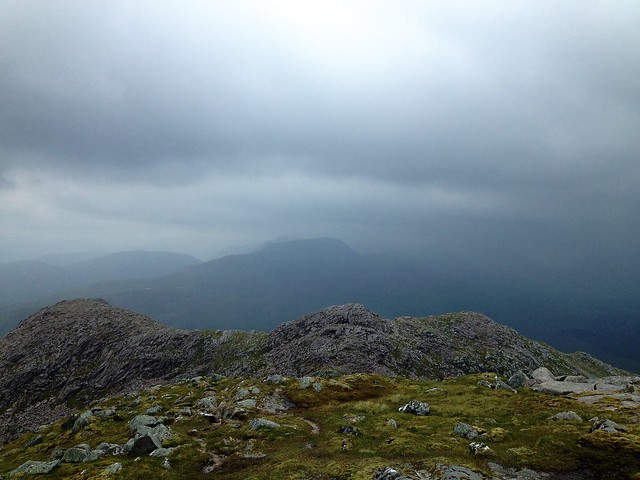 Looking NE to the weather than was heading my way. 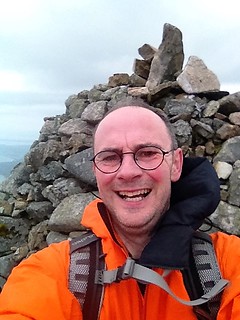 At the summit cairn.

The wind meant that the summit was not somewhere to hand around for any length of time, so I quickly started to retrace my steps and head back along the route I'd just come.

Even with the weather closing in the views were still great. 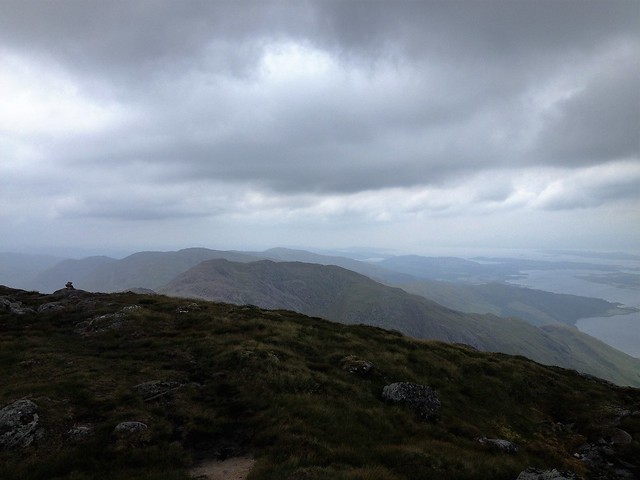 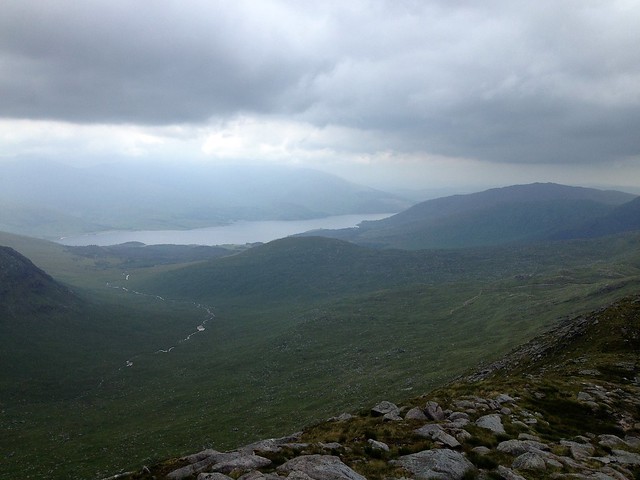 I'd not properly cleared my previous walk from my GPS, so there's a straight line at the start of the walk that should not be there!

- the clouds in some of your shots are brilliant

I've done the hill twice from Glen ure farm, and didn't even realise where the trade route went until recently - seems illogical to walk so far when a road goes right up to the bottom of it but hey ho, what do I know

Speaking of goats, the last time I ws up there we saw some truly massive goats - as big as highland ponies - supposedly the native Scottish breed. We only really saw them because they smelt so bad, so well camofaged they were, but I remember whilst descending, looking up at the skyline and seeing a line of big goat heads with massive horns, watching us - making sure that we were definitely going - it was really eerie

Cheers basscadet - I guess most people tackle this hill from the south as it gives you views back over the lock and out to Lisomore and Mull etc., for much of the walk. However, Glen Ure looks a good shout especially if you are combining it with Beinn Fhionnlaidh.

I climbed it from the head of Loch Etive. A pleasant route, but the ground in the area round Airigh nan Lochan was full of hidden holes. They are quite hard to spot and I managed to step in one, nearly breaking my lower leg, so if you do decide to do it that way, be warned!

Ben Nachie - thanks for the comment and the warning about the ground conditions on the route you took. They way I went involved a bit negotiating a couple of boulder strewn slopes and it would be easy to go over on your ankle on this as well.