Splashing about on the Starav twosome.

Splashing about on the Starav twosome.


Ben Starav has always been one of those must do munros for us, I can remember driving down the Glen Etive road for a picnic by the loch side when the children were very young I wondered what that "massive" hill was we saw on the left, looking at the map named it for us and that was it, we decided we'd climb it one day.

We had a cottage booked in Glencoe, Ben Starav was on the agenda during the week so the decision was made to have a go on the first decent weather day.

That day was Monday, the forecast was for showers, becoming less frequent during the day with the mountains being cloud free away from the rain.
Monday morning dawned and the weather looked promising.

We found the little parking spot at the start of the walk, there were two other cars there leaving just enough room for us, if cars are parked sensibly there's enough room for four cars at a pinch, being early is the key.

We fed the midges whilst getting our boots on, it was warm and humid, the mountains were clear of cloud (except ours), it was dry so that lifted the spirits. 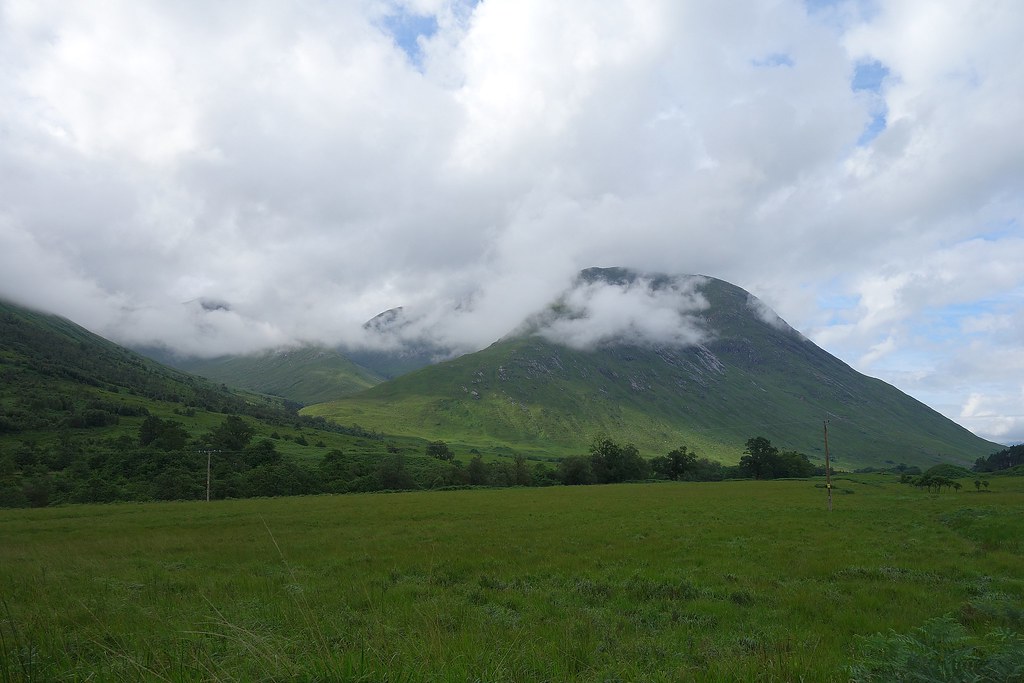 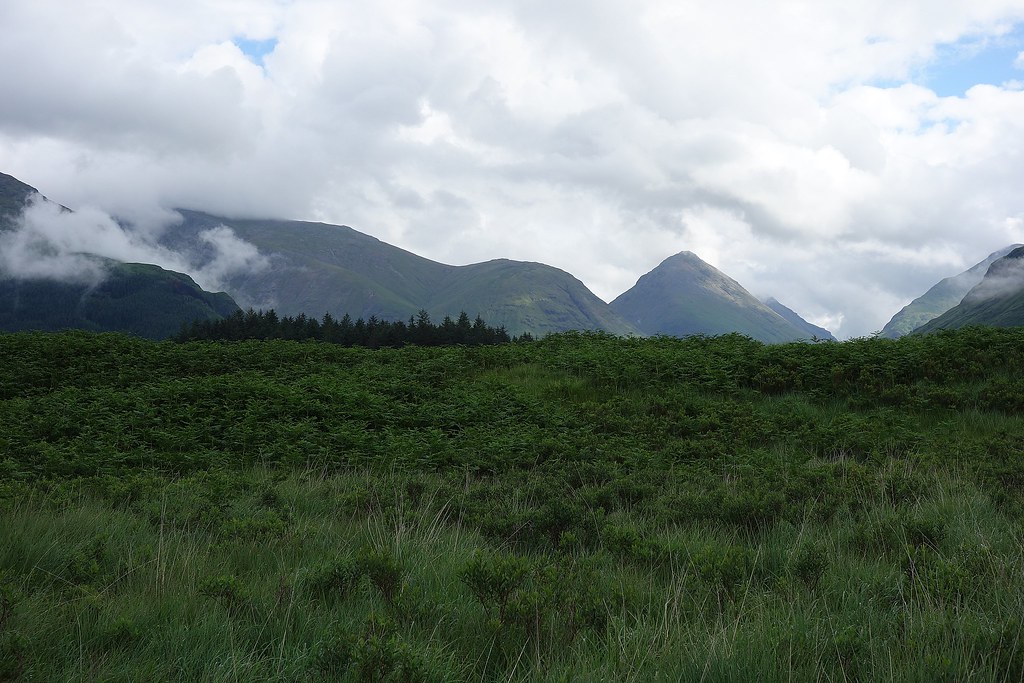 We set off down the track, went over the bridge and got to the farm Coileitir where the track is diverted around it, we must have missed a junction in the path at this point because we ended up on a very boggy path following a deer fence on the left,

it was heading in the right direction so we carried on.

Arriving at the Allt Mheuran we could see the path leading up the north ridge on Ben Starav but the burn was a torrent of white water with no obvious crossing point so the search was on for a somewhere to cross.

Once over the burn we got going following the good path to the start of the climb up the ridge.
This was steep so height was gained quickly, the views were getting better and better, the cloud was still bothering our mountain but looking back we could see the Buachailles, 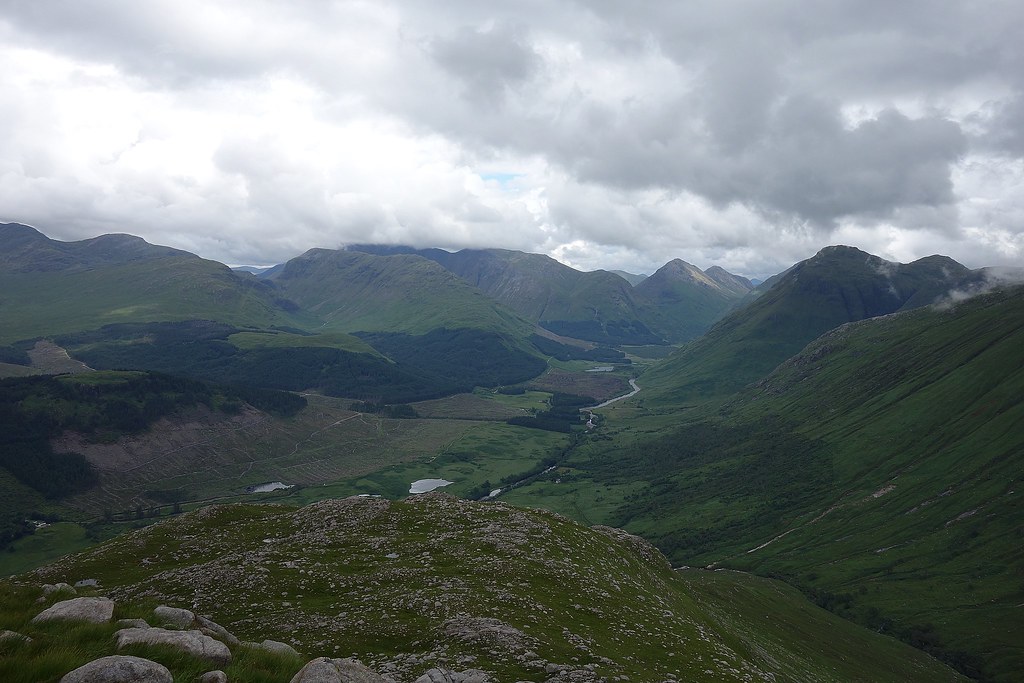 The cloud kept coming down and then clearing, as time was passing we noticed that the bealach above Coire Odhar wasn't clearing as it was, around 800m we were in the cloud and the first shower started.

That passed fairly quickly and we got some brief views, then the second heavier shower started so the waterproofs came out of the bags.

We arrived at the summit of Ben Starav, there's the remains of a trig point on the summit but if you blink you'll miss it (as I did), 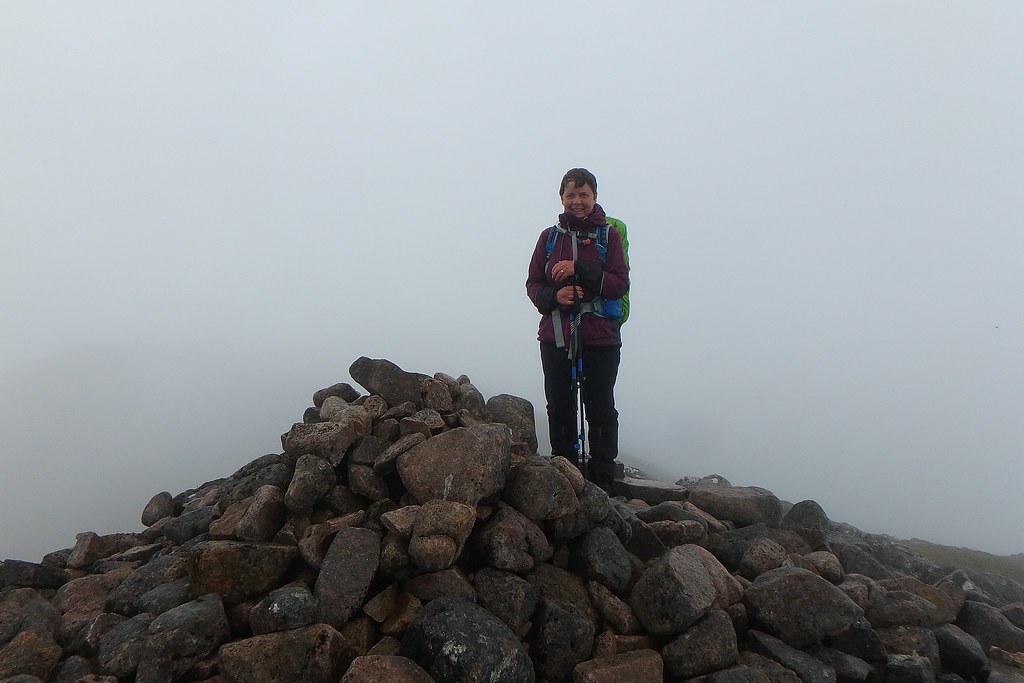 The views were for the imagination today, unfortunatly, so we took the summit piccy, 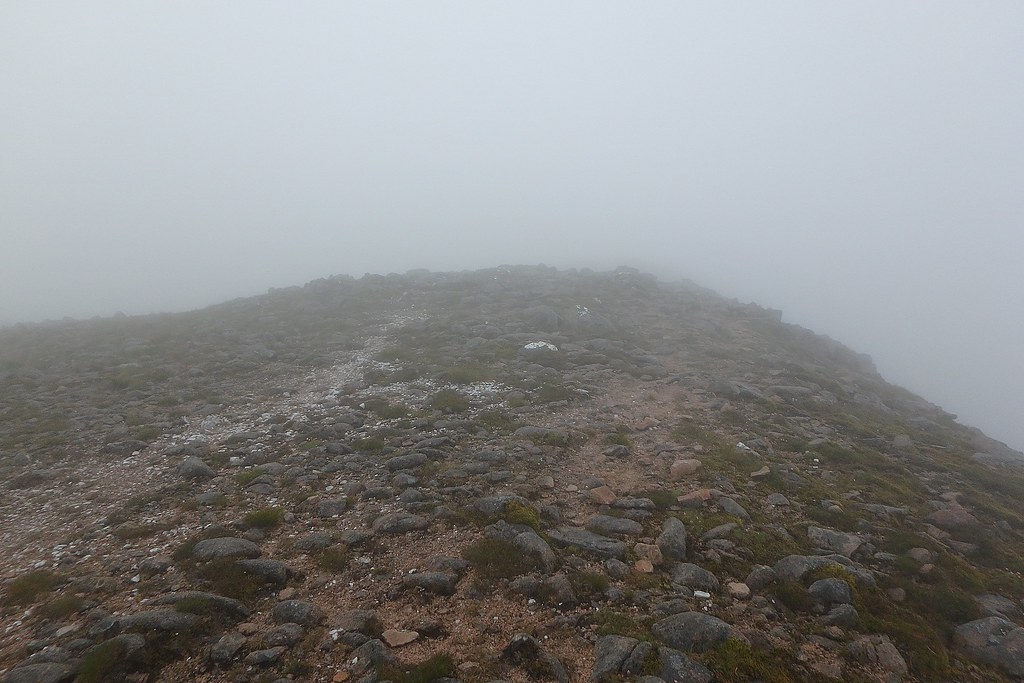 had a snack and went on to the south summit, another piccy then we set off for Glas Bheinn Mhor. 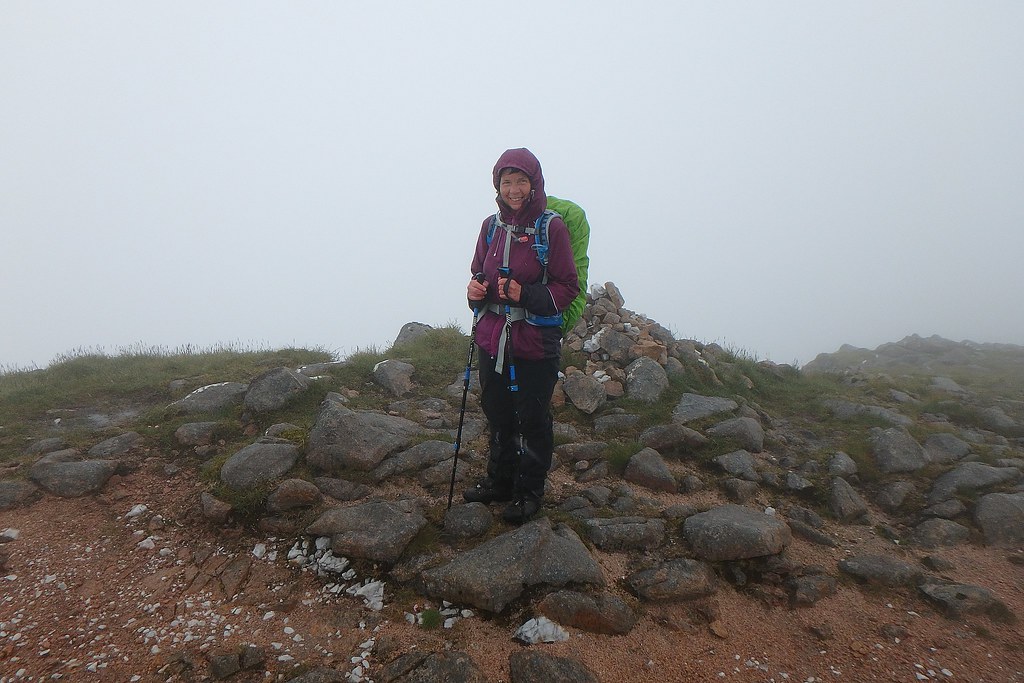 The route off the south summit is well trodden and even in the clag it's straight forward enough. 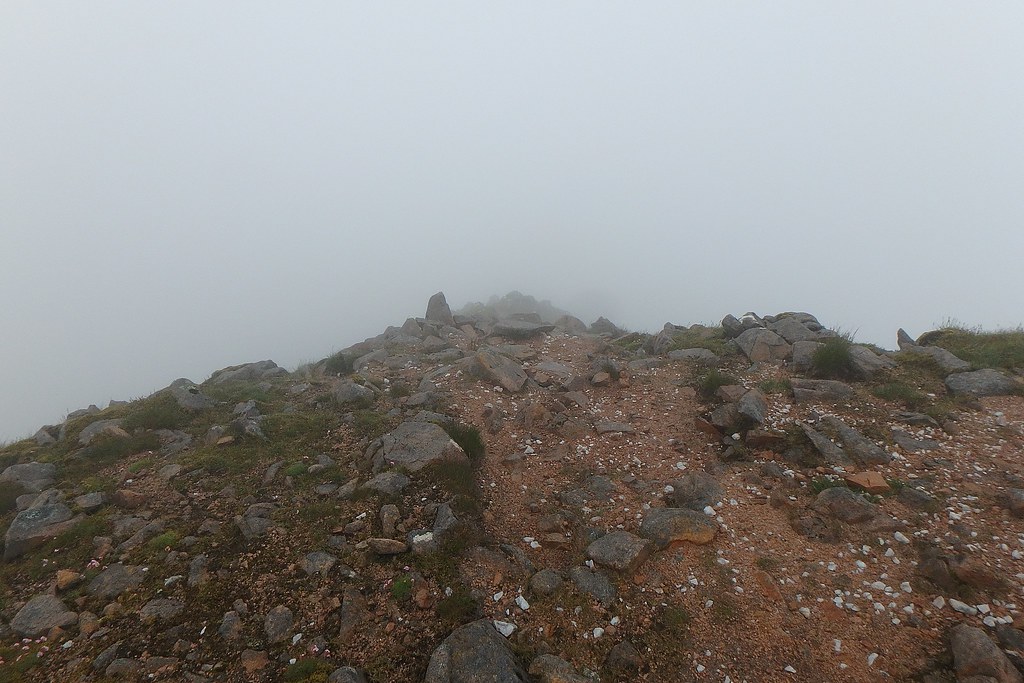 We went on the lower path which bypasses the crest of the ridge, it was raining pretty hard now so we decided to play it safe. The weather forecast said occasional showers, by now it felt like all the showers had merged into one long one right above us.

In the clag we kept an eye on the map and tried to guess what the views were like, coming off Stob Coire Dheirg the path descended quite steeply to Bealachan Lochain Ghaineamhaich, here we were tempted to go over to Beinn nan Aighenan but decided against it in the clag and rain, one to come back to in the future.

The climb onto Meall nan Tri Tighearnan was quite tiring and seemed to go on for ever, looking back the clouds had lifted enough to see where we'd been, 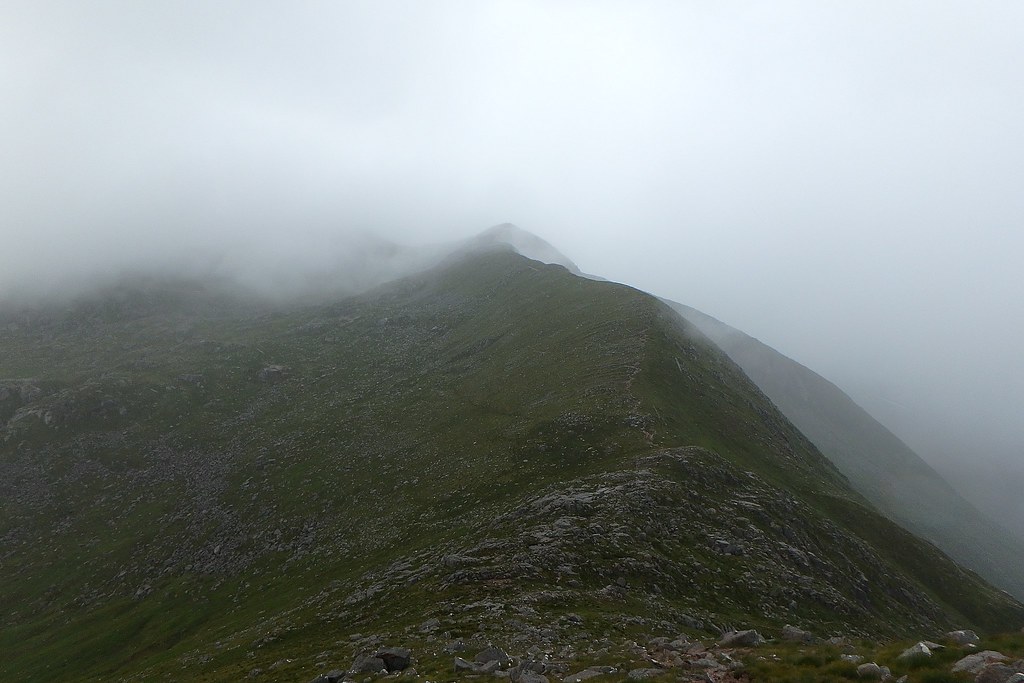 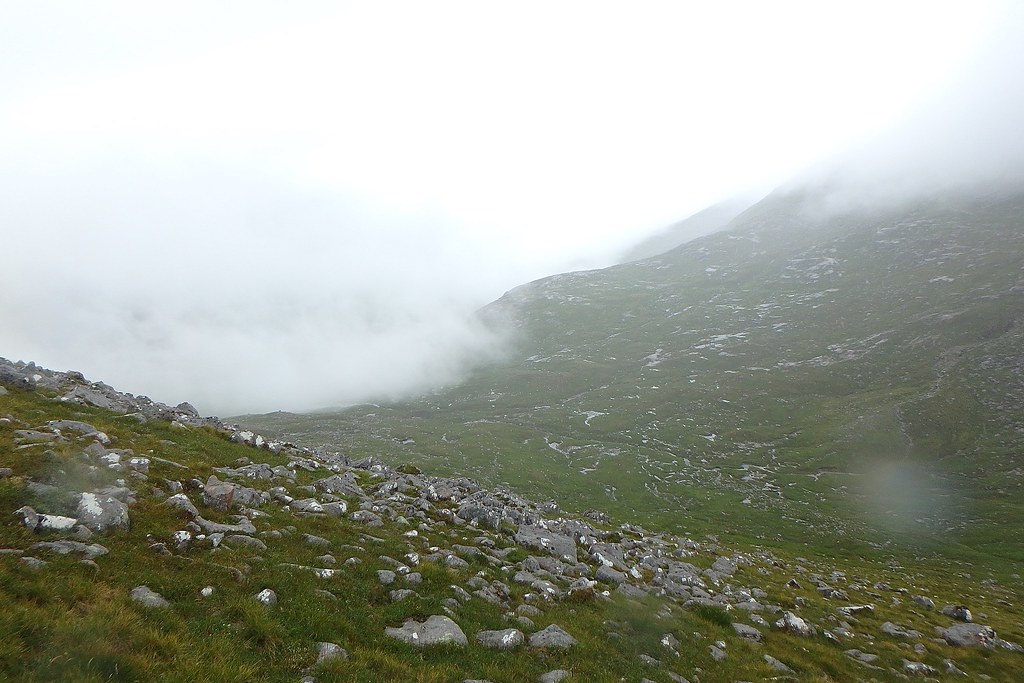 Once on the top we only had one more down and up to get onto Glas Bheinn Mhor. 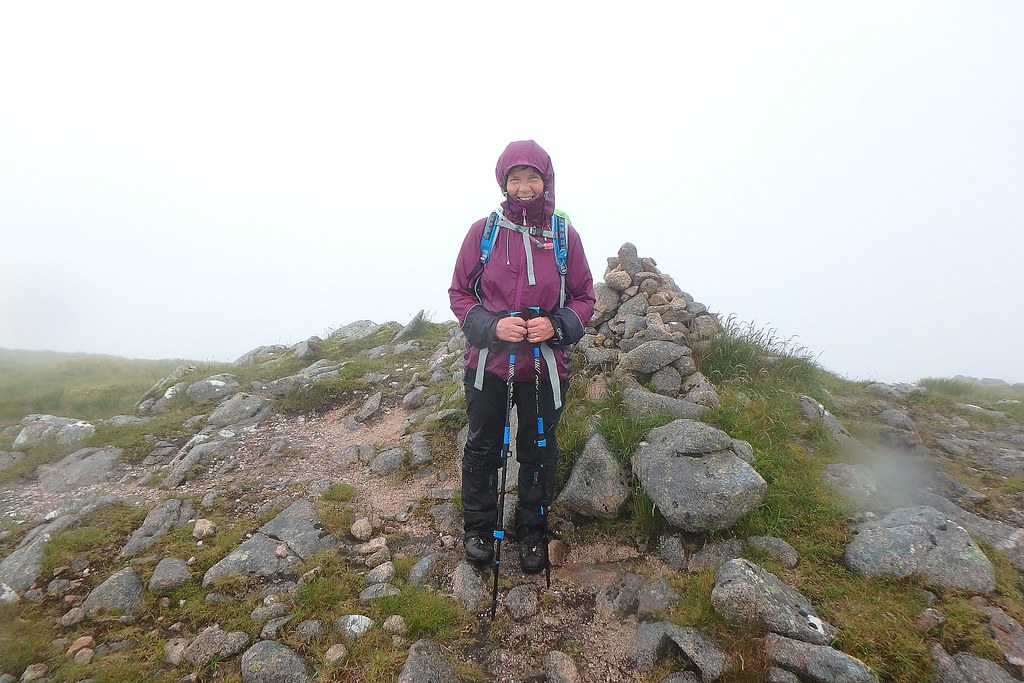 The walk to the summit of Glas Bheinn Mhor seemed to take longer than the map suggested, on the top we stopped for a quick snack and a photo then set off for the bealach we saw earlier in the day. 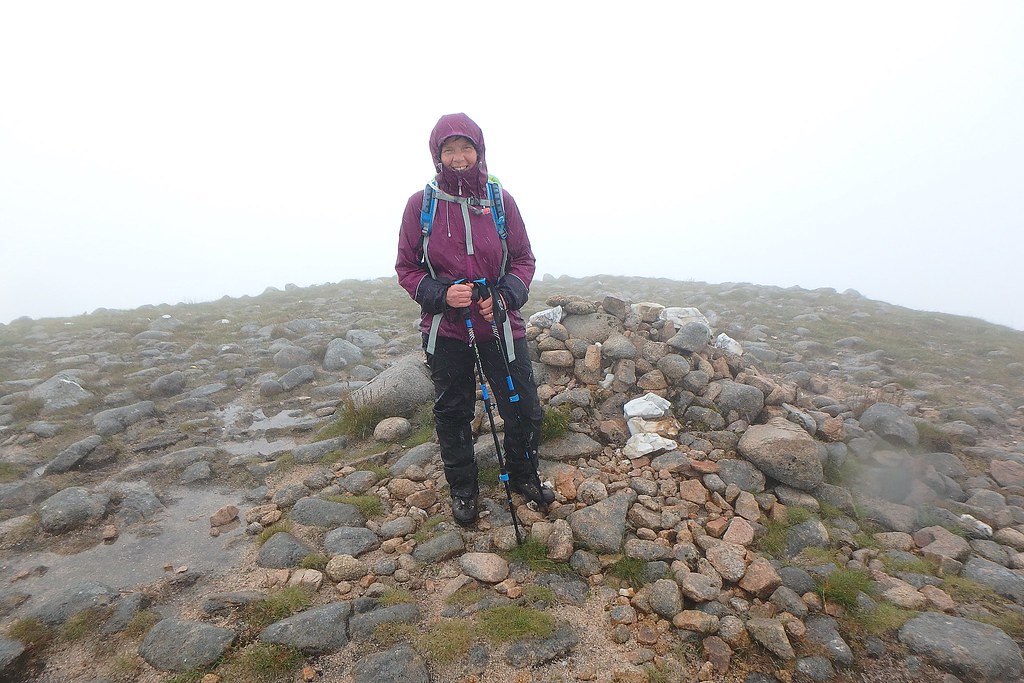 In the bealach the cloud lifted enough to see the way forward, the path down is good but very wet all the way, hopping over the boggy bits made the walk out seem a long trek.

Back at the car we got out of our wet stuff, fed the midges again

and set off back to the cottage.

We had a soggy day with no views, once the rain started it didn't stop, but it was enjoyable, there was no reason to rush about and why should we, the forecast was wrong, but so what!, any day out in the mountains beats the hell out of working.

Re: Splashing about on the Starav twosome.

Starav and it's counterparts live up to their reputation.
Sat on Starav thinking 2 or 3, 2 or 3, 2 or 3.
Went for 3 of them and it almost done me in going up to Glas Bheinn Mhor!

Re: Splashing about on the Starav twosome.

Nice one, I love this area although I've been very lucky with the weather there. The climb up starav is absolutely brutal