Having missed out on the mamores at the last WH meet due to a bad knee from overdoing it with my running training I decided it was about time I got a couple in before the next meet. Binnean Mor and Na Gruagaichean looked like the best of the mamores to start on. Parking at the St. Pauls church car park the path heads up through lovely woodland to open hillside following the signs for Loch Eilde Mor. Once above the tree line the track descends slightly as it crosses the moor to a vehicle track and then continues to ascend well above Loch Eilde Mor giving great views back to Kinlochleven. Route through the woodlands The path heading around Sgurr Eilde Beag in the distance

The track then gradually winds its way up and around Sgor Eilde Beag. As I climbed the footpath I could see someone well ahead which gave me incentive to up my pace and catch up. What I thought looked like a 60 year old man from behind turned out to be a 20 something guy trying to catch up with his mates who seemed to have veered off the path across the bog for some reason. Lucky for me I had seen the cairn and sharp turn in time and was now zig zagging my way around the side of Sgor Eilde Beag. I had a quick chat with the guy waiting for his mates and then continued to the junction of footpaths which lead up onto the ridge between Sgor Eilde Mor and Binnean Mor. Views across to Sgurr Eilde Mor

I could see right down into the valley and managed to just make out a herd of deer on the slopes below. At this point of the ridge it was still cloud free enough to be able to look across at Binnean Beag. As I set off along the ridge towards Binnean Mor the cloud soon rolled in and as I reached the cairn at 1062m marking the footpaths to my two munros of the day I was in thick mist. I took a compass bearing just incase the path petered out at any point which was just as well as a few boulder areas made it a little more difficult to tell where the path was. Eventually my nice wide ridge started narrowing and as it looked like it would get too narrow to continue I came to what looked like it may be a cairn – literally 3 stones on a rock! Not being sure I had a little look ahead but it looked so narrow I wasn’t prepared to go much further in the now very thick mist. 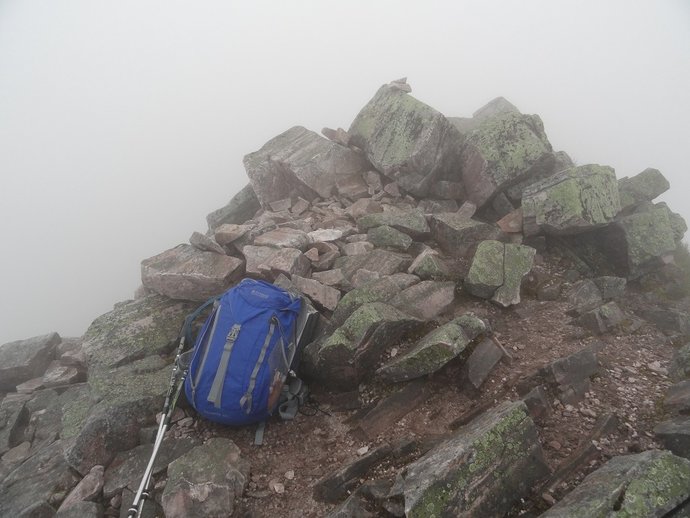 Stopped and had half my sandwich and by this time I could hear the 3 lads I'd passed earlier chatting as they came up through the mist. These guys must be bound to have a GPS. So I packed up my stuff and as the guys came out the mist asked if any of them had a GPS. Sure enough one did and confirmed I was indeed at the top. Thank goodness for that. That could be embarrassing showing my photos at the next WH meet. Believe me it’s not the first time I’ve sat at a cairn eating my sandwiches thinking it’s the top. At the top with the 'great' view behind!

I thanked the lads and said I’d see them at the next top. I soon reached the 1062 cairn and took a bearing to make sure I was heading off on the right path to Na Gruagaichean. I realised this was lower than the top I was at so hoped I might pop out of the cloud at some point.

Unfortunatley not it only seemed to get thicker. Visibility reduced to about 10 feet in front. If there wasn’t a decent path I would have probably given up and turned back at the last cairn. Through the mist I met another couple of guys doing four of the mamores from Glen Nevis. They were already heading for their last one and all had been in thick mist. Not far behind I met a couple in trail shoes not looking like they were having much fun and said they had decided to head back down after one munro. As the ridge started climbing back up towards Na Gruagaichean it started getting narrower until I seemed to be on a very narrow rocky ridge with no footpath. I thought I must have gone wrong and retraced my steps a few feet, I found a precarious looking path skirting around the side of the rocks but this soon seemed to narrow considerably to about a foot wide and a big drop into the clouds. I decided to back track again to the rocks, got out the map, compass and WH instructions. Looking at all 3 I decided I was not going back and that secondly if an inexperienced looking couple had come over in a pair of trail shoes then I could make it to the top. So I walked along the centre of the rocks with steep drops on either side and eventually came to path and ridge which widened out and took me to the top within about 10 minutes. I was pretty relived to make it. For some reason my lunch seemed even more enjoyable at the second top. I was checking the map when all of a sudden the cloud lifted enough to see the view and ridges below as I scrambled for my camera the cloud dropped again just as quick…it was enough for me to see that maybe it was just as well I hadn’t seen the steep drop from the ridge on the way up not being a great fan of exposure!

Finally giving up on waiting for the cloud to clear again I took another bearing so at least I knew I was heading on the right footpath towards Leachd na h-Aire. It would be a pretty long walk back if I ended up in Glen Nevis. Finally as I reached the Leachd na h-aire top the cloud lifted and the views down Loch Leven to the Pap opened up. From here it was a pathless decent back down to the valley which seemed to get steeper and steeper as I went. Coming out of the mist to the views Not wanting to get stuck at a deer fence I made straight for the sheep pen. A gruelling hour which seemed like 2. Glad I didn’t do this in reverse. Once onto the Mamore Lodge track an extremely faint track appeared through the bracken heading towards the Grey Mares tail track. The 'path' back towards the Grey Mare's waterfall

I seemed to spend the first 20 minutes wading through chest high bracken although there was a path at my feet. I was extremely relieved when I finally reached the sightseers path and it wasn't long before I was finally back at the car. As I drove back towards Glencoe the cloud lifted finally showing off the two tops I'd just climbed! Oh well you can't have everything and it really had been a great day out. With literally no mud and bog and dry feet all the way 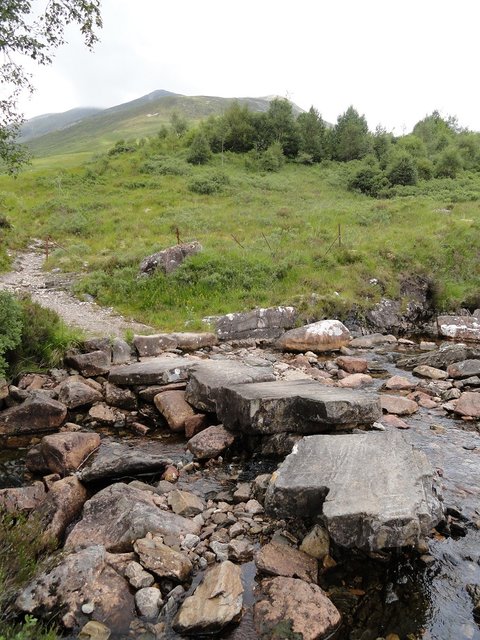 The clearing top of Na Gruagaichean