Where the windfarms are

Where the windfarms are


Some hills are just obscure by nature. Even local climbers don't bother. Carn Mhic an Toisich is one of such hills. It has less than 40 recorded ascents on Walkhighlands. Hardly a famous place to visit! For comparison, the more known neighbour Meall Fuar-mhonaidh has over 400 which makes it ten times more popular. Of course the key is location. Both hills are good viewpoints, but Meall Fuar-mhonaidh is easily accessible from Drumnadrochit, whereas Carn Mhic an Toisich lies amongst the moors and peat hags of Dundreggan Forest and apart from dedicated baggers, few know of its existence.
We decided to climb it on a showery Sunday, when weather was too unsettled for the Munros, but as we suspected, lower hills would have better conditions. We were pleasantly surprised by this walk. Not only weather held, but also going was easy and views much better than expected!
Before you rush to climb this Graham in crowds, I must curb your enthusiasm though: this area is a kingdom of windfarms. 3/4 of the route was on a wide track, first for access to wind turbines, higher up to Loch Liath hydro scheme. But despite the turbines, the whole walk felt very pleasant and satisfying.

Track_GLEN MORRISTON 25-06-17.gpx Open full screen  NB: Walkhighlands is not responsible for the accuracy of gpx files in users posts
There are two tracks that give access to Carn Mhic an Toisich. Both start from Glen Morriston and we picked the one beginning from a cluster of houses in Bhlaraidh. There is a good parking area about 600m west along the road, opposite a working quarry: We walked back to Bhlaraidh and took the main track past the houses, over a stile in the fence and into the forest. Technically, this is a route where a bike could be used, but we didn't bother. There is a second Graham which can be combined with Carn Mhic an Toisich, but we had done that one before from Corrimony direction. If including only Carn Mhic an Toisich, it's just over 20km, so it can easily be walked even on a shorter day.
One has to be careful in the forest as not all tracks are marked on the map, there's plenty of windfarm access activity and one can get confused...
Which way? Sad to say, the initial stage of the approach is a bit depressing, just follow the yellow brick road kind of experience: I couldn't wait to leave this behind... Shame how "sustainable energy" does not look at all sustainable from certain angles 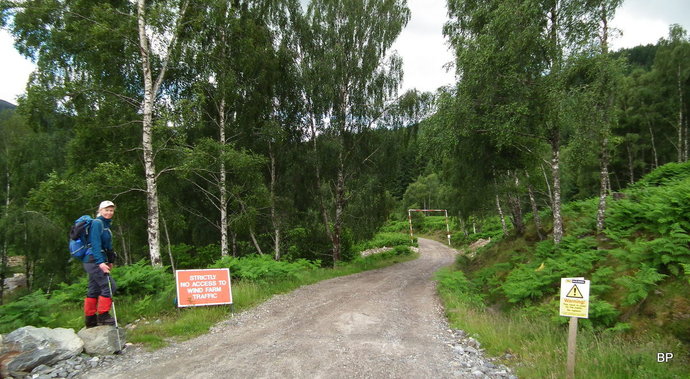 It was Sunday so no windfarm traffic thankfully, at least it was quiet...

A good question for Kevin! 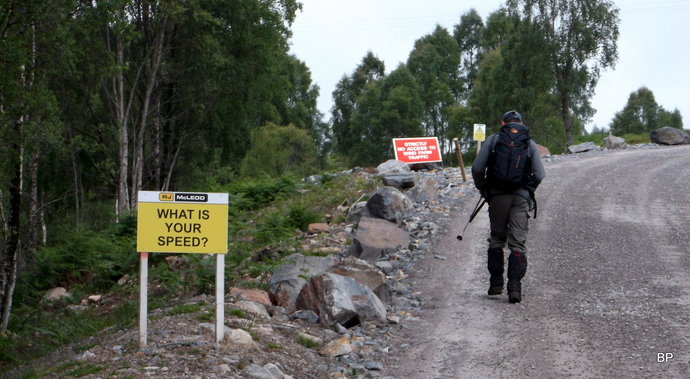 After 2 km of not very picturesque landscape, we reached a junction at 375178, where we turned left, whereas the windfarm access track turned right

There is a small map on the junction, explaining the network of hydro schemes: 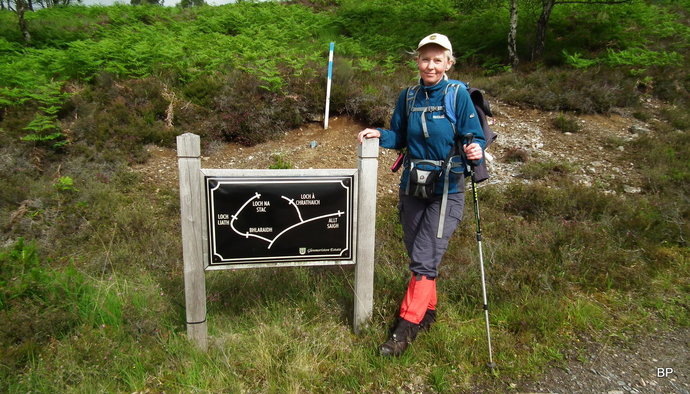 Weather was unsettled but still dry at the moment, even some sunshine, though cloud was lurking on the southern horizon, ready to attack:

Having left the windfarm access track behind, we entered more wild country, the current track leading to a small hydro dam. We walked through some nice forest, sadly, large chunks of the woods have been recently felled, but at least views were more interesting:

Looking south from near the dam:

The bridge below Bhlaraidh dam: We spent some time on the dam (there is access to the upper level but no way across) taking photos and enjoying the sunny spell. Windfarms were now in sight and of course they spoiled the views.
There's sustainable energy for you! 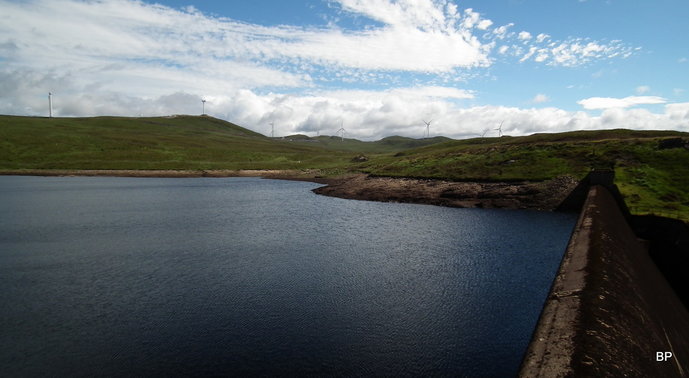 I guess the reservoir is fully artificial, it has a nasty "tidal zone": The wind turbines are under construction, a few of them still waiting for their propellers (is that the right word for the turning bits? or maybe I should call them wings or blades?): We continued on the track, happy to see that weather was holding... ...but not very happy to see more construction work nearby:

Just before the second dam (on Loch Liath) the track divides, we took the left branch here:

...but before reaching Loch Liath, we left the track and aimed west across the boggy moorland to the first top, Carn na Caorach. After the initial wet section, the ground became drier and walking was very pleasant over a few smaller lumps, before reaching the lower top of our target Graham. On our way up, we "admired" the windfarm in its full "glory": 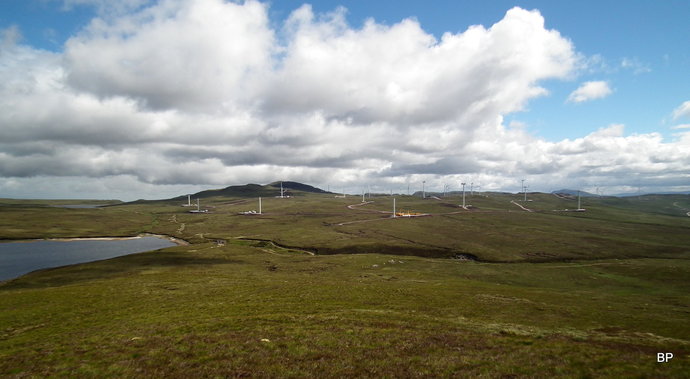 Zoom to Loch ma Stac and the ruined lodge. This is quite an intriguing ruin and well worth a detour if you're bagging both Grahams:

That's how it looks at close range (photo taken in 2013 when we climbed Meall a'Chrathaich): Carn na Caorach (foreground) and Carn Mhic an Toisich (the dark shape to the very right): 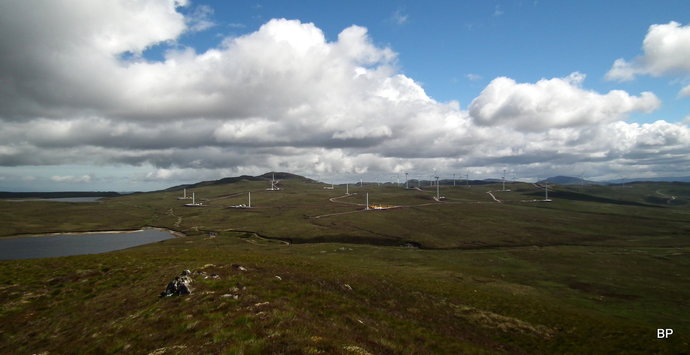 From Carn na Caorach, we dropped about 30 m to a wide bealach, filled with peat hags, but nothing that couldn't be jumped over:

To the north, the familiar shape of our local Corbett, Beinn a'Bha'ach Ard:

The final climb of just 70m brought us to the summit, a small cairn perched on a rocky lump. Graham no. 79 for me, no. 45 for wee Lucy. My hair was in disarray but to my excuse, it was a windy day. 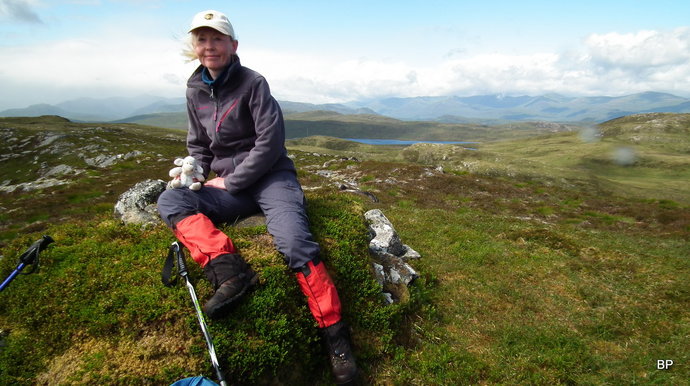 I must say, what saves Carn Mhic an Toisich from being classified as a Boring Heathery Lump, are the views. To the north-west, the Munros of Affric :

Wind turbines to the east:

The ridge goes on for some distance and it is possible to climb this Graham via this ridge, starting from near Dundreggan and using a track along Beauly-Deny powerlines. We are saving this approach for winter as it's shorter:

Lucy and the Affric hills: Despite cloud passing all around us and showers to the south of us clearly visible, we were still basking in sunshine

I was expecting this Graham to be a BHL but it's not! Maybe not the most exciting hill, but worth saving for a sunny day with clear views. You can enjoy it as long as windfarms don't bother you too much...
On the way down, we skirted the summit of Carn na Caorach; it's only 3km back to the track! We spent some time watching the wildlife around us. Once back on the beaten track, we discovered a slow worm dozing in the sun:

I was concerned that someone could step or drive over the poor wee sod, so I gave him a gentle tap on the side with my finger, persuading him to get of the road. Kevin was laughing at my engagement in wild life preservation

The second Graham, Meall a'Chrathaich, could easily be added to this route but it would involve walking right past the windfarms, so I think that the Corrimony approach, though longer, is much better.
.......
My next story will be about two quite famous Munros and a strange conversation we had on the ridge. Details to come soon.

Re: Where the windfarms are

Some great views from the summit. The title of your report makes me laugh