Time to re-visit the Kintail area, as that was where the forecast pointed. Unfortunately, it was due to clear up later in the day, but we were hoping it might do so an hour, or two earlier. Alas the Met Office were spot on, for summits to clear at mid-day.
Anyway, me and Big Jesper set off quite early, as usual, heading for the trio of Carn Ghluasaid, Sgurr nan Conbhairean and Sail Chaorainn. Missed the large lay-by at Lundie on the first pass, but soon realised we had indeed passed by, about turned and were back 10 minutes later. How one knows it is 'Lundie,' I don't know. It was very grey, overcast and surprisingly breezy, much to our dislike, as we set off along the old military road, on the opposite side from the lay-by. As per the WH's route, we branched off at the transmitter mast, up the stalkers path, which was easy to follow and soon took us up many zig-zags, onto the plateau. I don't think we noticed the steepness because we were still in thick clag and had no views to enjoy. Indeed, jackets were donned and there were one, or two comments about wishing we had gloves and or, hats Big Jasper emerges on the summit of Carn Ghluasaid. We made the summit of Carn Ghluasaid, in about an hour and a half. There's several cairns on the way to the top and a couple more at the summit and I think we visited them all, just in case. Still no views, so we didn't linger long, after a wee bite to eat. The going, round and up to Sgurr nan Conbhairean was not too taxing, though we just had to check our bearings once, or twice to be sure we were on track. It took about a further hour to this summit, but still not long enough to allow the fog to clear, so after one or, two photo's to show you couldn't see anything, we made off for number 3, Sail Chaorainn. Jaf, on summit of Sgurr nan Conbhairean, 1st time around. And, yours truly on second summit.

As we dropped off Sgurr nan Conbhairean, there were the first signs of it starting to clear, as occasional glimpses into the corries, Gleann na Ciche and other hills came and went, giving some optimism we might see a bit more of our hills, as we made to Sail Chaorainn summit, on the 3 hour mark. As we made it back to the bealach below Sgurr nan Conbhairean, the views began to clear considerably, so we decided to return to the summit, for a better photo, than out first visit. We hadn't spotted where the path traverses SW, off the hill, on our way down, but it was visible enough our our return. As it is so near the summit, our diversion to the top, only cost about 10 minutes, or so. The route down was quite enjoyable, as we made speedy progress, with some cloudy views of surrounding ridges, glens and Loch Cluanie, even having the odd glimpse of sunshine

Little now remained but to safely negotiate crossing the Allt Coire nan Clach, which we did lower down. On way down, toward Loch Cluanie. 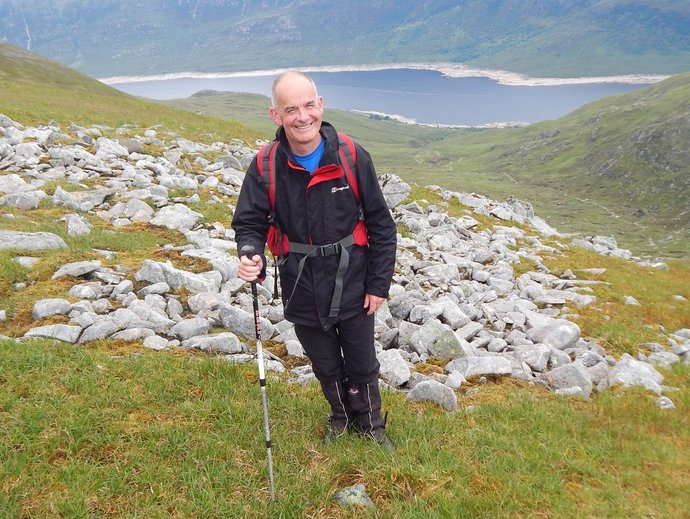 The Gorm Lochan. I suppose if there's a drought, it might become the Gormless Lochan? South Glen Shiel Ridge, a little clearer of the cloud. Sun on Loch Cluanie, at last. The falls below which we crossed the Allt Coire nan Clach.


At this point we found we were both contemplating the wisdom of sticking to return by the old military road? My feet were still suffering a bit in new boots. The surface of the track had been quite stony and also appeared to have an uphill route back, so we opted to head for the smoother, but longer and harder surface of the main road. Did it save, or cost time? Who knows, but our journey time of five and a quarter hours, was well inside the time allotted on WH's, whiich does seem a bit 'generous.' even if Big Jesper did have his spikes on Not a good view of Lochan Uaine. Over to the South Glen Shiel Ridge.