Approaching Quinag from the car park

I remember well the moment when I saw Quinag for the first time. We were driving south from a week in Durness a few years ago, and stopped to take a few photos of the Kylesku bridge. It was a bleak, grey day but suddenly the mountain's great hulk loomed out of the mist. It looked tricky from this angle and went straight onto the "needs further research" list for a future climb. Happily it turns out that the hill is a popular one, owned by the John Muir Trust and with excellent paths along the ridges of all three Corbett summits. The route we took is the same as the Walkhighlands so I won't go into detail here. Suffice to say that any scrambling is very easy indeed, and the views are fabulous - in fact, this walk was probably the highlight of a memorable week which also included Suilven, Ben More Assynt, Conival and several shorter walks in the area. The weather forecast was for coastal sunshine and thundery showers inland. Fortunately Quinag stayed dry all day, while the rain really got going on the surrounding hills.


quinag.gpx Open full screen  NB: Walkhighlands is not responsible for the accuracy of gpx files in users posts

Just after leaving the car park we accidentally scared a grouse and several chicks, all who went flapping off in different directions across the bog. Ascending the first summit, Spidean Coinich, is mostly like ascending a long, rock staircase, with good views back over Loch Assynt: Looking ahead, the rest of the day's walking was a feast for the eyes: 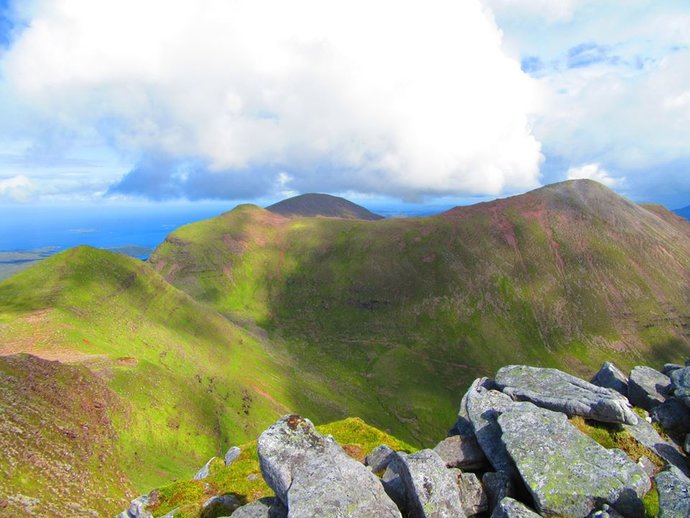 Some excellent ridge walking followed, then a descent to the Lochan(s) Ruadh bealach. View back to Spidean Coinich: Lochan Bealach Cornaidh below, with the eventual return route behind: Ascent ahead to a 714 metre, unnamed summit: Afterwards there's a further descent to an even lower bealach, before - you guessed it - another ascent to another minor summit. This too is unnamed, but is the important spot where all three of Quinag's ridges join up. View south back over the route just taken: ...and east towards Sail Garbh (not ascended until the end of the day): West over the Assynt boglands: Finally, north on yet another enticing ridge to Sail Ghorm, Corbett no. 2. Not so much up and down on the way to this one, but with some interestingly-shaped minor peaks, gullies and rock formations: Traversing the side of the first, curiously flat-topped summit: But before heading across that, we couldn't resist venturing out onto this ledge: Gully on the way to Sail Ghorm: From here we retraced our steps almost to the "hub" peak, before taking a path traversing its left-hand side which provided a shortcut onto Sail Garbh. From the traverse path you can see an abrupt change in rock type as a colour shift from red to grey near the summit of Sail Garbh: Ascending Sail Garbh provided us with some of the best views of Spidean Coinich and the coire loch in front: A bit cloudier on the summit here so we didn't stop for long. The descent: return down the ridge nearly to its low point again, then fork left on an excellent path which eventually descends to the coire. Only here does it become a little boggy for short stretches. View from lower down: Plenty of these around today (and in fact all week!): If you're spending any time in Assynt at all, Quinag should be on your shortlist. This is one of those mountains that's much better than photos seem to suggest (even from other walk reports on here) - a really excellent and interesting day.

It looks a fine mountain, denfinella. It's nice that you were lucky with the weather when other nearby hills got the rain.

Excellent photo of that narrow spur that runs out from the main ridge.

Looks wonderful! I just gotta get up there...

simon-b wrote:It looks a fine mountain, denfinella. It's nice that you were lucky with the weather when other nearby hills got the rain.

Yes, very lucky that day (in fact most of the week...). It's a wonderful hill, or range of hills really...

litljortindan wrote:Excellent photo of that narrow spur that runs out from the main ridge.

Thanks, it's a fun spot!

It's even better than it looks