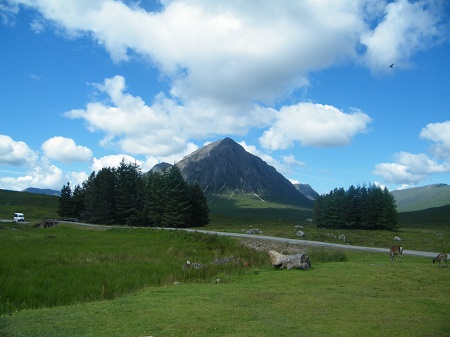 BEM from the Kingshouse Hotel 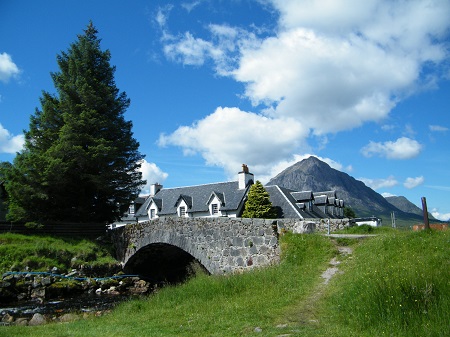 BEM from the Kingshouse Hotel

This classic and iconic mountain in the heart of beautiful Glencoe had been on my radar for some considerable time, so when my three daughters gave me a Christmas present of a few nights’ accommodation in the bunkhouse at the Kingshouse Hotel, I was keen to get this trip started. This ideal present was easy to give me however the hard part was attempting to get us all together from all corners of the UK and the Middle East and trying to arrange holidays etc. Thankfully a date in July was arranged which we could all make except for my eldest daughter, so all systems were go to decide what hills we would climb over the space of four days. Also, going in July, the weather would be kind to us, wouldn’t it?

Living in Rannoch as a boy, I would always admire BEM and the ‘Three Sisters’ so well seen from Rannoch Station and at the head of Loch Rannoch at Kinloch Rannoch and vowed one day that I would venture onto their summits. Now after nearly 60 years, my dream would be fulfilled.
So, Wednesday the 12th of July appeared very quickly and was turning out to be a cracker weather-wise as high pressure now began to appear over Scotland. Our plan for day one was to all meet up at the Kingshouse Hotel by 11am where we would decide what hills we would climb first. We unanimously decided to do the BEM ridge including the two Munros, Stob Dearg and Stob na Broige at either end of its classic ridge walk.

One daughter was travelling down to Glencoe from Cawdor, Inverness-shire and I was departing from Auchterarder, heading first across to Dunblane train station to pick up my other daughter and her boyfriend. Once picked up (thank you Scotrail for being punctual), we drove north towards Doune and Callander where we picked up the A84 on the very scenic drive up to Lochearnhead then picking up the A85 towards Glen Ogle then onto Crianlarich. From here we picked up the A82 as we headed towards Tyndrum where we stopped at the Green Welly Shop to stock up on some things we had forgotten to bring with us. The place was very busy as it always is as it probably is the last opportunity to refuel your body and vehicle before crossing the wilds of Rannoch Moor.

The route north from Tyndrum was very scenic and the road was very busy with traffic both business and tourist. The grand and massive hills either side of the road kept your interest but not too much attention as you had to keep your eye on the traffic in front of you. Tourist cars in front of you were easily spotted by the ridiculously slow speed and the sudden braking into lay-bys and car parks. Once passed Bridge of Orchy, the road had many long straight sections in which to overtake.

With military precision, we turned up at the Kingshouse Hotel at bang on 11am followed a few minutes later by my daughter who had driven down from Inverness-shire. So far so good. After a quick check-in to the bunkhouse, we had a short period taking photos of the extremely tame deer around the buildings. The Kingshouse Hotel is currently closed due to a massive refurbishment which speaking to the staff at the bunkhouse will take at least two years. It should look good once it is finished though. Several tour buses appeared over time to see and photograph the deer as well as feeding them with all sorts of food products. This appears to be a popular spot for tour guides to take their clients to guarantee a close encounter with our highland deer and to guarantee their fee. Finding a carrot on the ground, I attempted to give a tame hind it but surprisingly it turned its nose up at it preferring crisps and sweet products from other people. 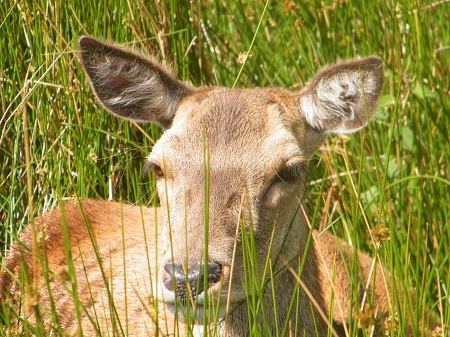 Tame hind deer in the grass1 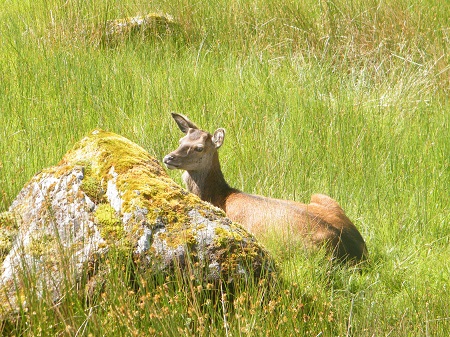 Tame hind deer in the grass2 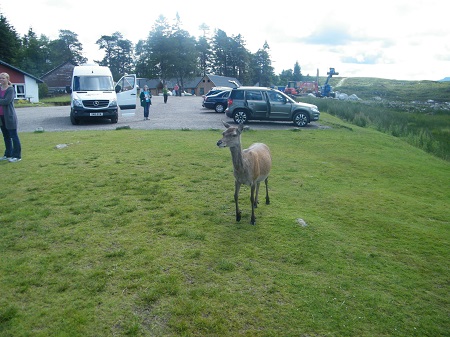 We then had a quick chat and we unanimously decided to change our walking plans for the day. We initially planned to walk the two Munros behind the White Corries ski centre (Meall A Buiridh and Creise) but as it was such a cracking day, we decided to walk the BEM ridge bagging both Munros, Stob Dearg and Stob Dubh. It was best to walk this classic ridge walk in glorious weather rather than in the low cloud and pouring rain which can quickly become the latter in Scotland.

Piling into my daughter’s car, we then drove the short distance to Altnafeadh where we found the car park very busy; after all we had left it rather late to set off on our walk. Thankfully the weather was great and the long summer nights never get dark until very late, so no pressure then. From here, we got a great view of BEM and its ‘Achilles Heel’ Coire na Tulaich, the way up to the ridge. 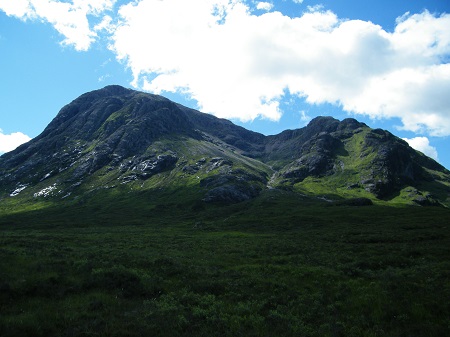 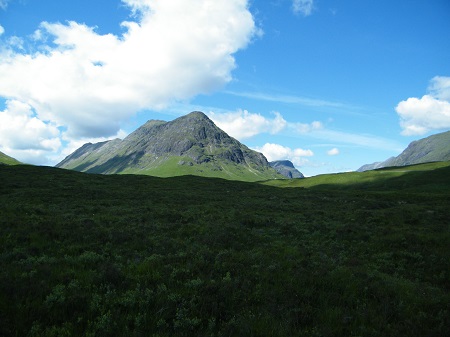 Once ready, we then set off on the fine path which took us to a footbridge crossing the River Coupall then passing a pretty white cottage towards the steep descent into Coire na Tulaich. Looking over to my right we got a great view of BEM’s smaller brother – Buchaille Etive Beag, a walk we plan to do over the next few days.
The path now became steeper as we gradually worked our way up on the right hand side of the burbling burn running down the higher part of the corrie. This was a hard climb but was rewarded by the emerging fine views we got of the start location at Altnafeadh and also of a clear Ben Nevis summit plateau. 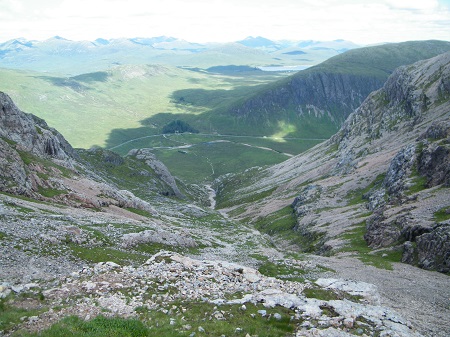 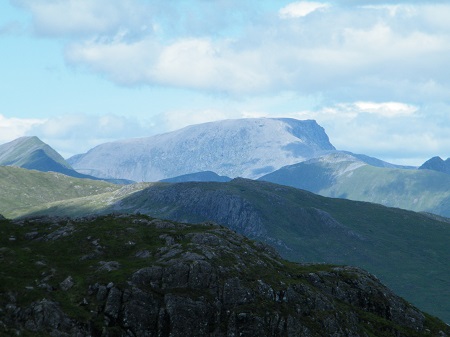 Good views across to Ben Nevis

The last really steep part of this part took us finally to the ridge line where we stopped for a time while we admired and took photos of the panoramic view around us. From here we got great views of the Nevis range, the Grey Corries, the classic ridge walk of the Aonach Eagach and the ‘Three Sisters’ including the ‘giants’ Bidean nam Bian and Stob Coire nan Lochan. 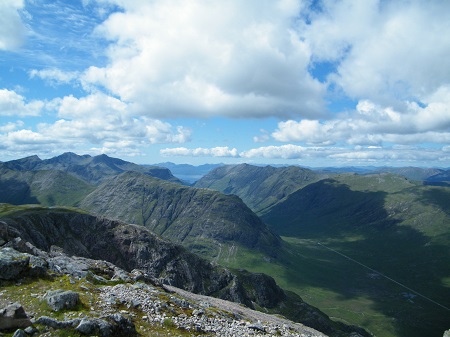 View across to the Aonach Eagach and the 'Three Sisters.' 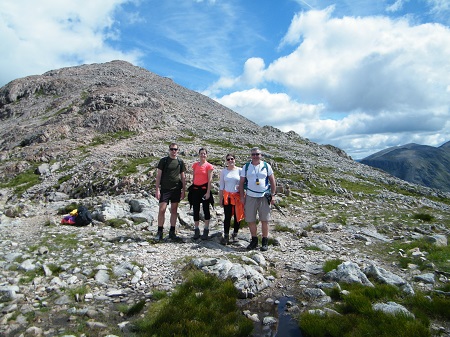 Finally on the ridge with Stob Dearg behind us.

With the hardest part of the walk now behind us, we then proceeded to walk up the path which twisted its way up to the summit of Stob Dearg (1021m, 3350 feet). Fine views were seen from here particularly of the expanse of Rannoch Moor including a distant Schiehallion. 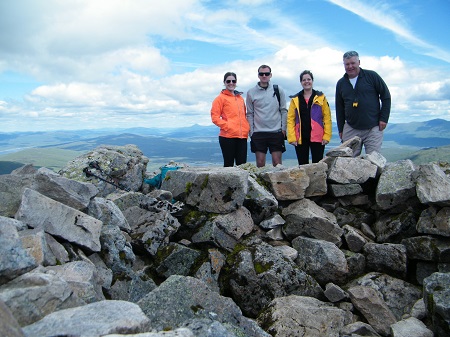 This spot was a perfect place to enjoy the panoramic views and some refreshments. During this, a massive black raven appeared which got very close; obviously taking any opportunity to grab at any food crumbs dropped.
Reluctant to leave this idyllic spot we had to pinch ourselves to move on as we still had a long way to go. Walking back down to the point where we arrived on the ridge, we continued along the ridge aiming for the Munro Top of Stob na Doire a formidable challenge and a Top which deserves to be a Munro in its own right. 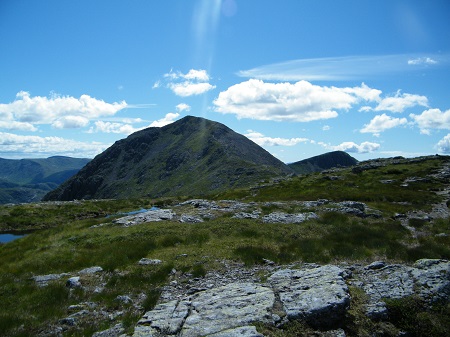 The path continued to be obvious and straight forward as we now ascended the steep slope to Stob na Doire’s narrow summit. Good views back towards the ridge previously walked and the summit of Stob Dearg were observed at rest stops. 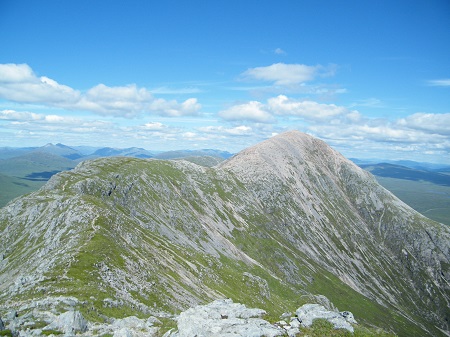 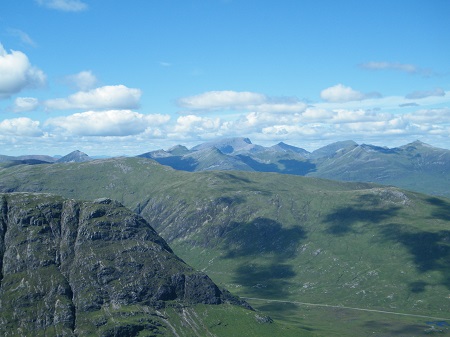 Views across to Ben Nevis and the CMD arête 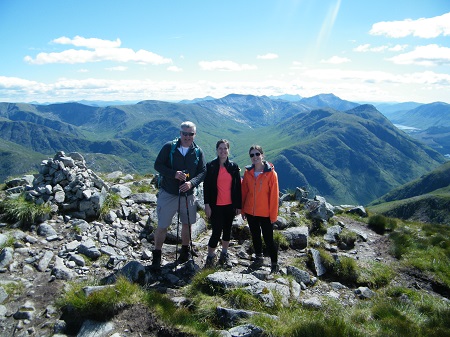 On the summit of Coire na Doire 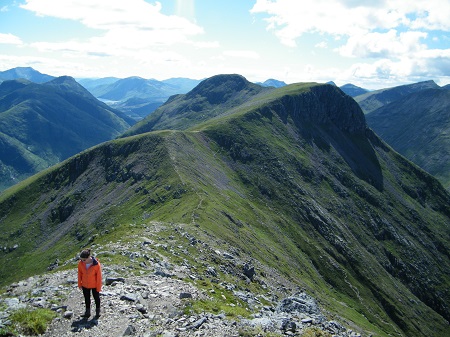 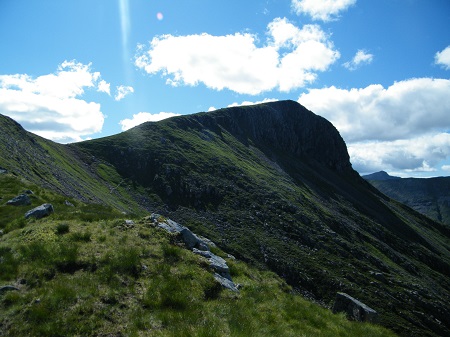 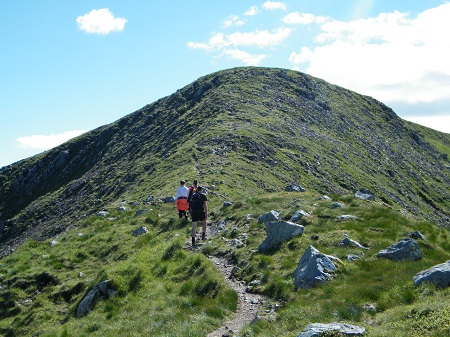 The path continued along the ridge and was easy to spot as it undulated towards the 2nd Munro, Stob na Broige. A little descending and descending had to be done before we reached the end. Ahead of us lay the impressive cliffs of Stob Coire Altruim where we kept well away from. As always, fine views were seen from all areas of the remaining ridge walk which kept your interest going. One last pull up and we finally reached Stob na Broige, the end of the ridge. Walking passed the summit cairn a short way, we got fabulous views down to Glen Etive and Loch Etive, well worth the long walk out to reach this point. A long time was spent here soaking up the views which after a day like today were brilliant. 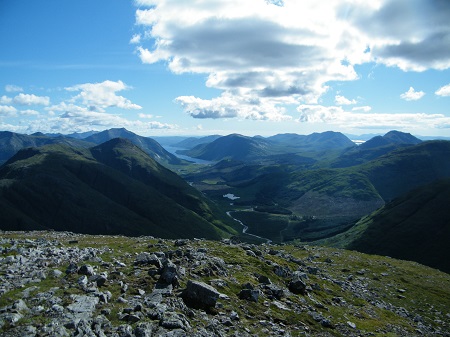 After a considerable time spent here, we had to kick ourselves to get moving again as we still had a long way to get back to our start location at Altnafeadh. With it being mid-summer, we knew we wouldn’t get caught out with darkness as it doesn’t get dark in these parts until at least 11pm.
Setting back now retracing our footsteps until just after the descent of Stob Coire Altruim, an obvious path makes it way down from the ridge to the Lairig Gartain away below. Care is needed here as the path starts off being good but deteriorates the further down you get due to erosion. There were a couple of occasions I had to slide down on my backside but this was short-lived. After what seemed like ages, we finally reached the Allt Gartain which was easily crossed. All that remained now was for us to follow the good footpath out to the main A82 road. Good views above were seen here of the steep sides of BEM’s ridge which we had just walked. 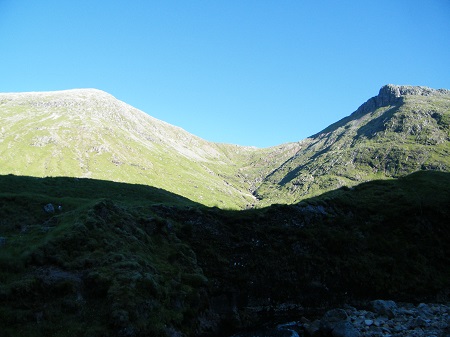 The way down off the ridge

Making good progress, as it was now early evening and we wanted to get back to the Kingshouse before the last meals order. On reaching the main A82, all we had to do was to walk on the narrow path by the road back to our awaiting car at Altnafeadh which now was one of only a few vehicles left after the busy state of the car park earlier in the day. As the sun now began to recede from the surrounding hills placing dark shadows everywhere, it was pleasing to see our day’s achievement still bathed in strong sunshine. A very rewarding day in such brilliant conditions. 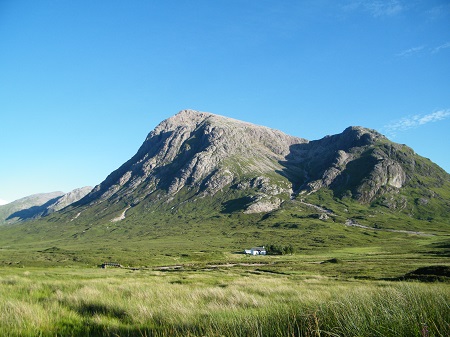 Final view of BEM from the A82

Summary: A great walk made all the better by the fantastic weather. This is one of the classic ridge walks and although not severe, does still deserve a lot of respect. Keep your eyes on the path! After being my boyhood dream who never got around to tackling BEM, I can now be satisfied that I have now trod on your pleasant ground. Definitely one to do again as it’s so enjoyable. Great memories of a great day spent with family on the hills of Glencoe which will live with me forever.

Users browsing this forum: Phil the Hill, RayK and 66 guests