Hooked up with Big Jesper and Lawrence, recently acquired pal from south of the Clyde, for these two hills, south of the South Glen Shiel Ridge. Alas, it was to work out a bit like our recent trip, to the three on the north side of Loch Cluanie, i.e., we got there too soon! The forecast was for it to clear about midday, but by then we were well round. We had thoughts about also doing either, Sgurr a'Mhaoraich or, Gairich, but eventually that idea also fizzled out, along with the cloud. We started off for Spidean Mialach in heavy cloud, from a car park a bit uncertain as to whether we were in the right spot and likewise, we missed the stalkers path, but headed off the road, taking a rough track up to a mini hydro scheme, which I think joins onto the stalker's path, mentioned on WH's, higher up? At least it made for good progress as Big Jesper and the greyhound, known as Lawrence, left wee Jimbo in their wake

The road ends at a wee dam where we crossed the Allt Coire Mheil, onto a rough track, over some squidgy ground.

By now there was light rain/smirr, a wee breeze and visibility sometime down to 30 yards, or so. Loch Fearna, was not to be seen and we wandered off track a few times, but always quickly found it, or remnants of it, as it steadily began to rise, onto stonier ground, then the summit cairn, pops into view, at 996m, after an hour and a half. We could sense the steep drop off to the north side, but see none of it. Time for some grub, a drink and photo, but that was that. It goes down steeply, but not willing to try for a closer look.

We soon set off, along the ridge, any significant glimpse's of which, were only to prove all too fleeting. One, or two steeper steps to climb, just about requiring a hand, or two on rock, but nothing troubling. After a couple of false dawn's
we made the summit of Geouraich, on the three hour mark, just about time for the cloud to start lifting, according to the Met Office. Sure enough, the forecast began to come true and views of the South Glenshiel Ridge, Glen Quoich and Sgurr a'Mhaoraich and Loch Quoich, began to emerge. Jaf, at the summit cairn of Gleouraich. Still caught in the clag. Lawrence, on the second munro. Ten minutes later the cloud begins to clear. Looking over Druim Seilleach, where a fine path takes one up, or down. Alltbeithe. Looking like a bit of a city centre junction. Some of the hills of the South Glen Shiel Ridge, also come into view. Jasper pointing out the views?

The stalker's path off Druim Seilleach ridge was a much more pleasurable part of the walk, as we began to see the course we had followed and the drama of the surrounding sights, particularly west to Sgurr na Ciche, which eventually revealed itself, before we reached the bottom of the track, which finally emerges onto the road, after a very muddy, claustrophobic trip through a narrow gap in thick rhododendron bushes, back at the car in about 4 and a quarter hours. Heading down, with Loch Quoich behind. Some sort of view of the ridge, as we make our descent. Nice view toward the west end of Loch Quoich. 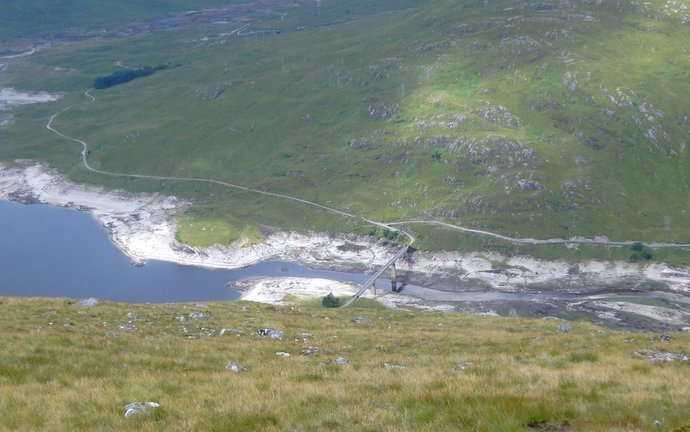 Jaf and Lawrence. The Corbett, Sgurr an Fhuarain and Munro, Sgurr Mor, behind. Sgurr an Fhuarain and Sgurr Mor. Sgurr na Ciche, eventually shows face, as we near the bottom.

As said, we deliberated options of squeezing another munro, into our day, but my wee legs weren't up for it and the others perhaps, were hastened into calling it a day, by the steady harassment of our good friends, the midges, who never miss the chance of an easy feed. At least we headed home, with a few good views to recall, though I had been looking forward to a spectacular on these hills. A good excuse to return, wouldn't you say?

What a shame JJim. At least it cleared a bit on the way down. Hope you get a chance to go back on a better day. I did these quite a number of years ago, and it was a glorious day - sorry!
I don't remember an awful lot about it, though I do recall the rhodies and the walk back down, but the views are certainly terrific across to the Glen Shiel ridge and down to the bridge. Two quality hills these, shame about the weather. I just won't mention the cracker I got on Gairich the day before!

Thank you, Katy and Graeme. My nose feels rather sore. Must be from all the "rubbing in," from you pair

Very jealous, as I had been most impressed by these hills when viewed from the SGR a year earlier. A couple of hours later and we'd have had clear skies, I'm sure. Never mind. We've had our fair share of good days on the hills and if the chance arises, I'd be happy to revisit these pair on a fine day.

[quote="JimboJim"]Thank you, Katy and Graeme. My nose feels rather sore. Must be from all the "rubbing in," from you pair

At least you've kept your sense of humour

As you say, you get good days and bad, but they're always there for a revisit!