Round the back of Wyvis: Meall Mor and Beinn nan Eun

Round the back of Wyvis: Meall Mor and Beinn nan Eun

I briefly thought about heading for the west coast on Sunday, but in the end, the threat of strong showers kept me closer to home. And why not? Glen Glass is a mere 25 miles away and very scenic, but I don't visit all that often. I decided on a bike-assisted trio of Meall Mor, Beinn nan Eun and Carn Loch nan Amhaichean, knowing I could easily drop the last of these if I was short on time.


Map.gpx Open full screen  NB: Walkhighlands is not responsible for the accuracy of gpx files in users posts
Having climbed Meall Mor from the SE end of Loch Glass and also from Loch Morie, I thought it would be nice to try it from the NW end of Loch Glass this time. Leaving the car shortly before midday, I made the easy cycle up to Wyvis Lodge. A couple of hydro schemes have been constructed in the corries behind Wyvis Lodge since my last visit, so the track surface (which was always reasonable) has been improved even more. 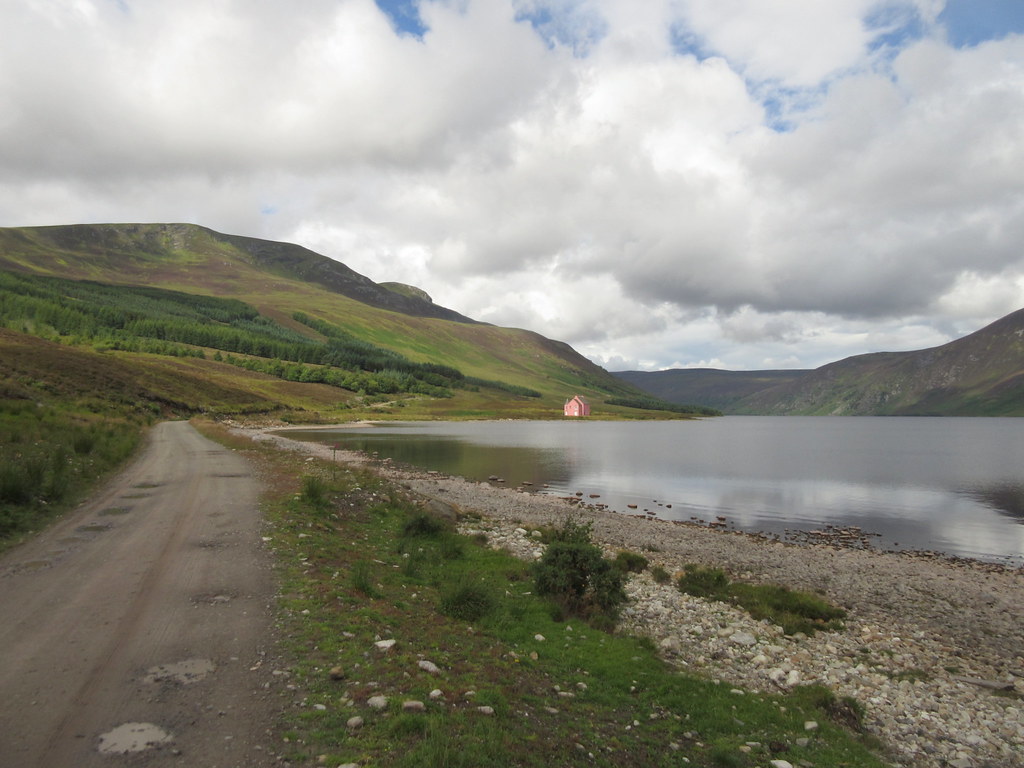 Cycling up the side of Loch Glass 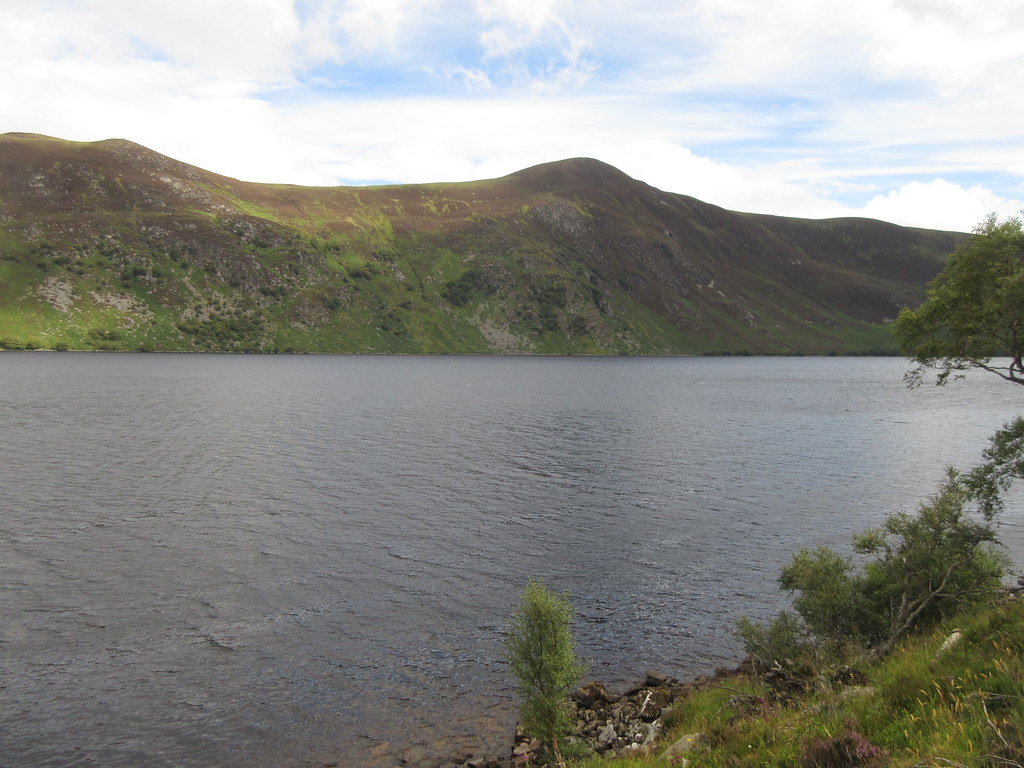 Meall Mor across the loch

Abandoning my bike by a gate, I made my way across the front lawn of the lodge, finally getting a proper look at the outdoor swimming pool that I had spotted before. There was no-one around today, but there is an alternative route round the back of the lodge grounds if required. 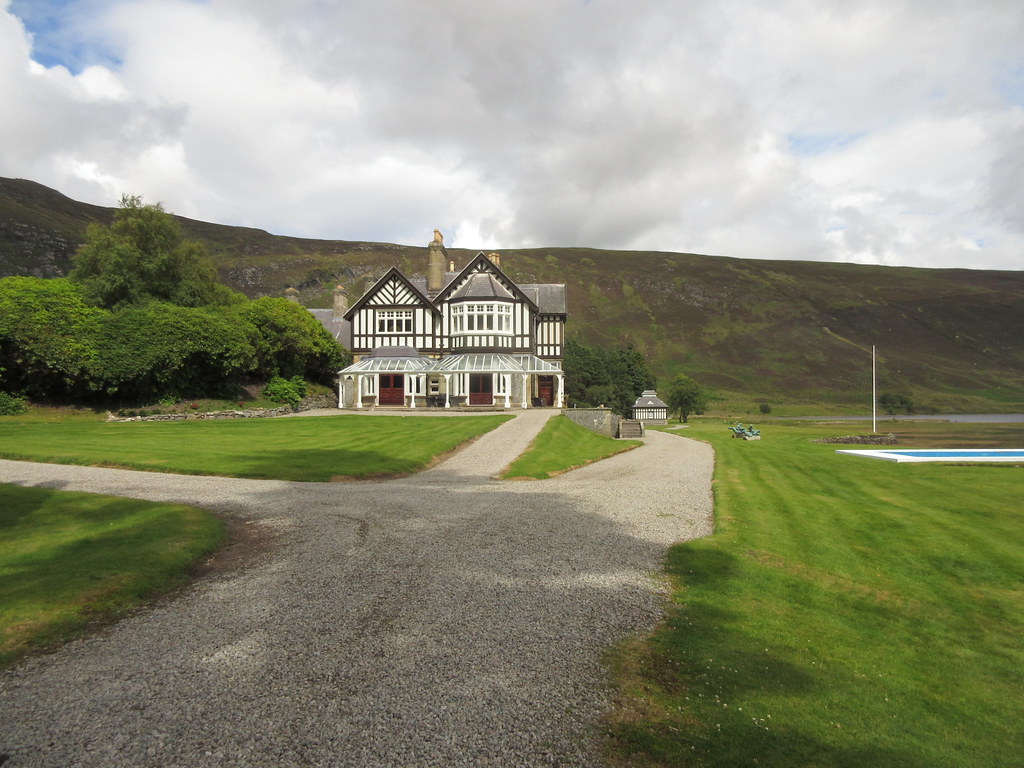 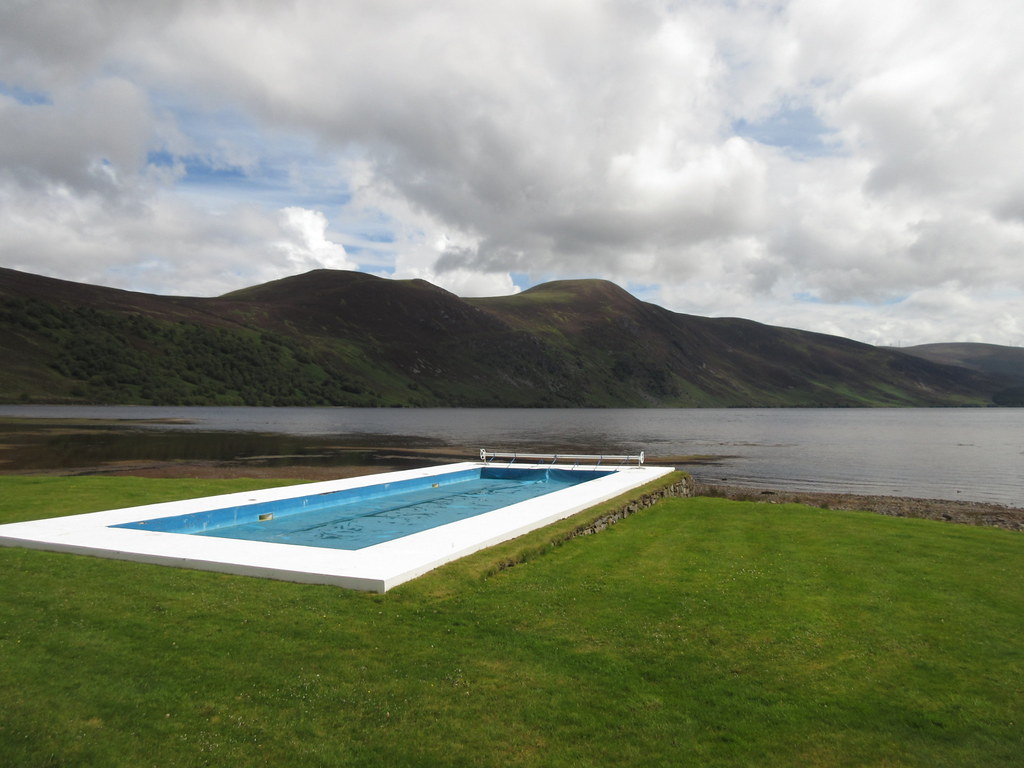 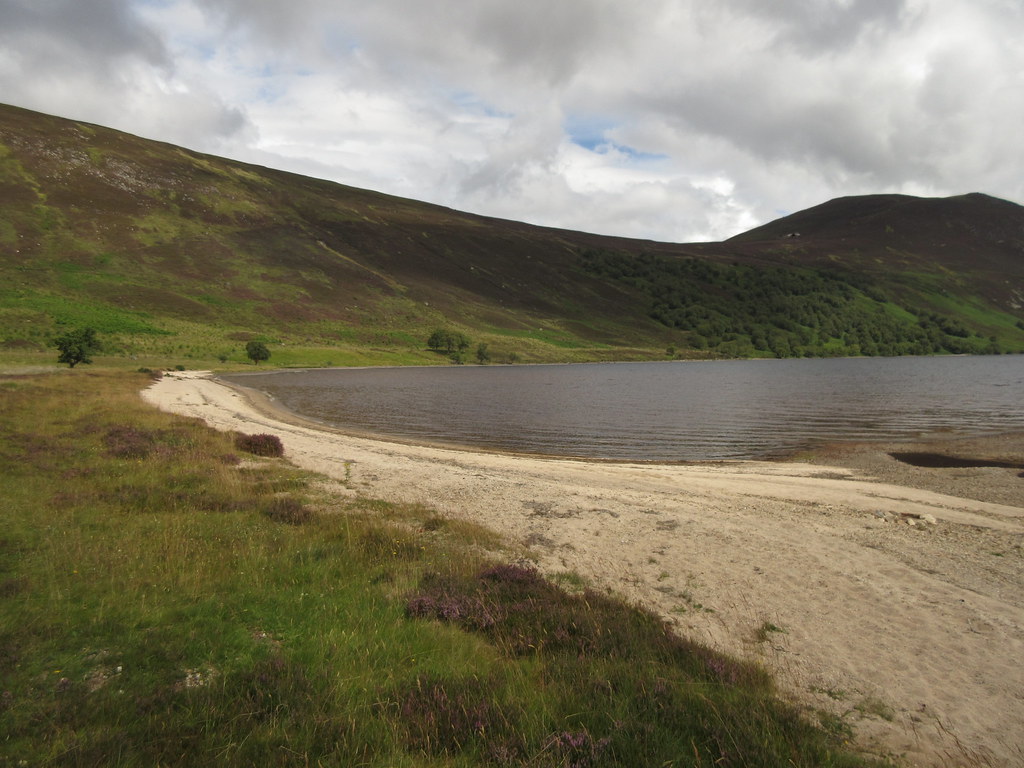 Beach at the head of Loch Glass

Passing around the head of the loch, I was aiming for the faint right of way which goes from Loch Glass to Loch Morie. This took me past another cottage which had just been renovated, then onto the heathery hillside. 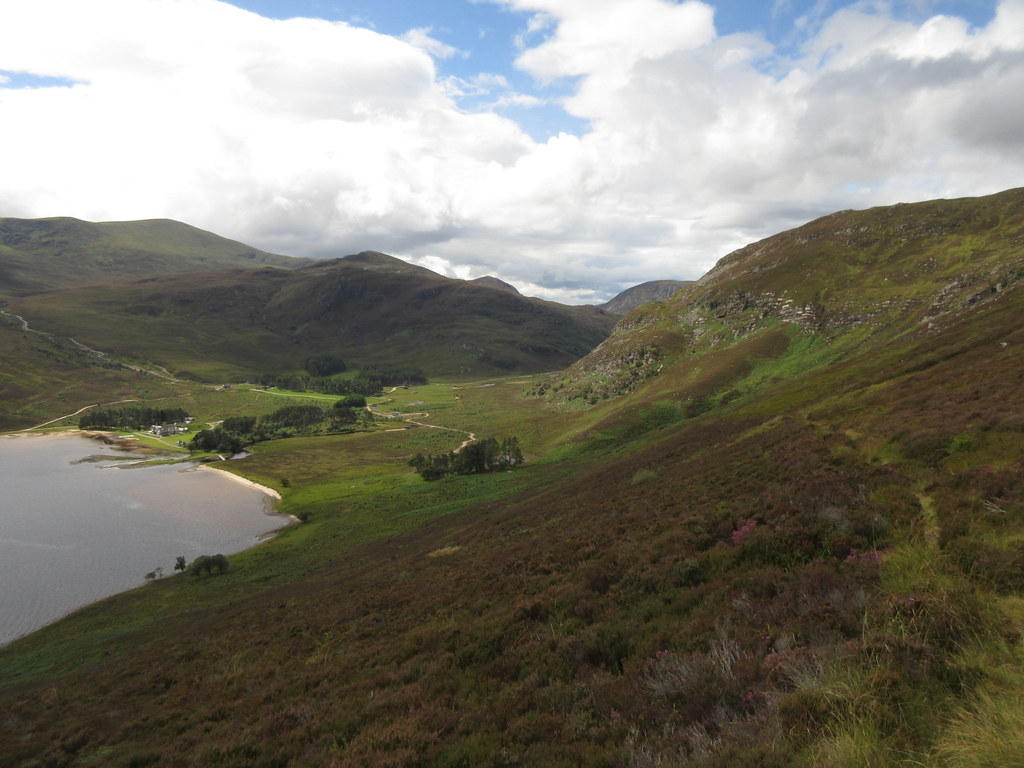 Looking back to Wyvis Lodge

The path is more obvious from a distance, but is easy enough to follow at first. Where it became fainter, it was time to leave it and traverse across the heathery slopes of Meall Beag to reach the steep ridge up to Meall Mor. As ever, the views across Loch Glass and Glas Leathad Beag are fantastic from here. 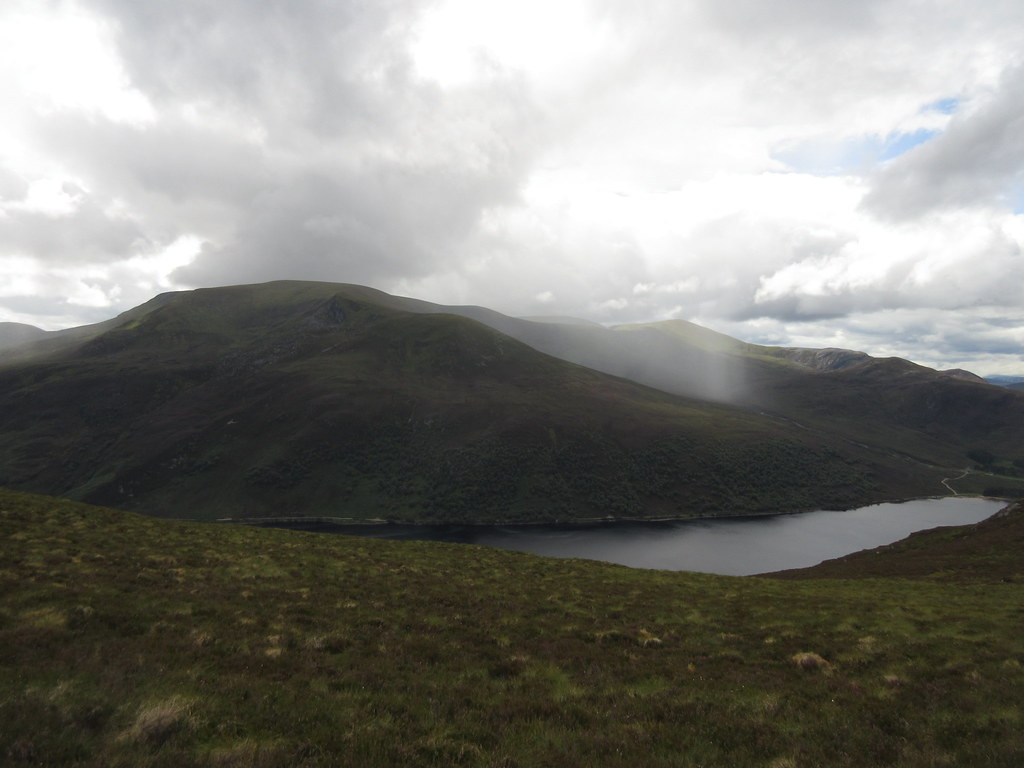 Across to Glas Leathad Beag 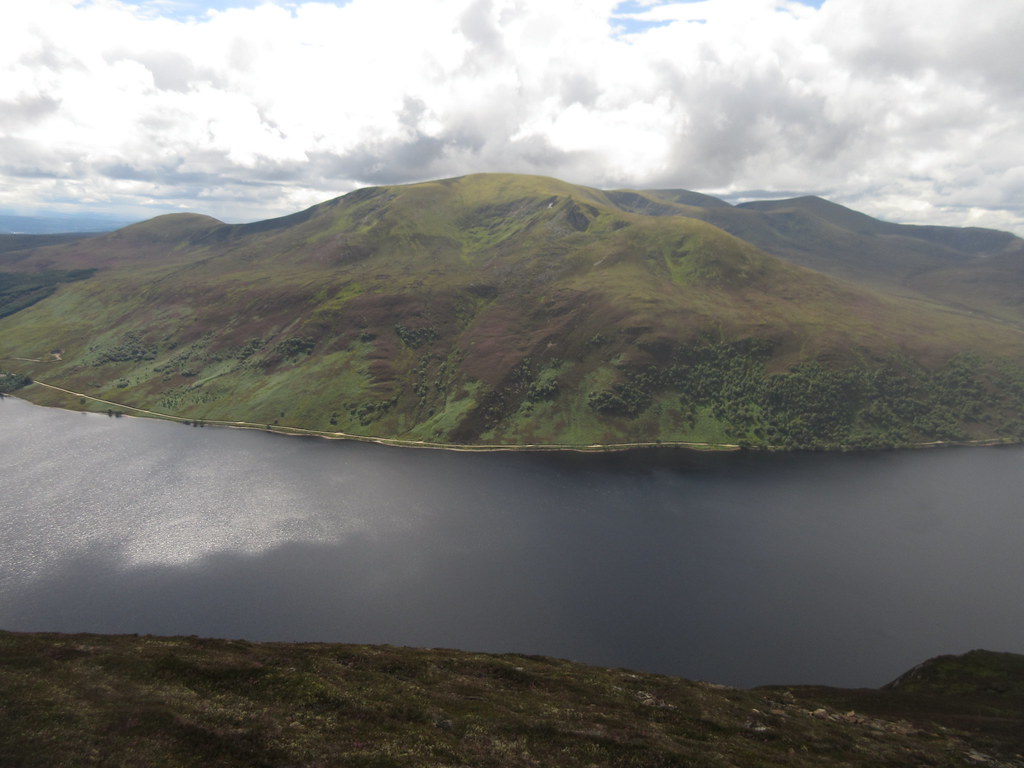 After visiting the summit, I descended a short way to the east to have a break overlooking the head of Loch Morie. Then it was down across the heather to Meall Beag and across the Loch Morie path. 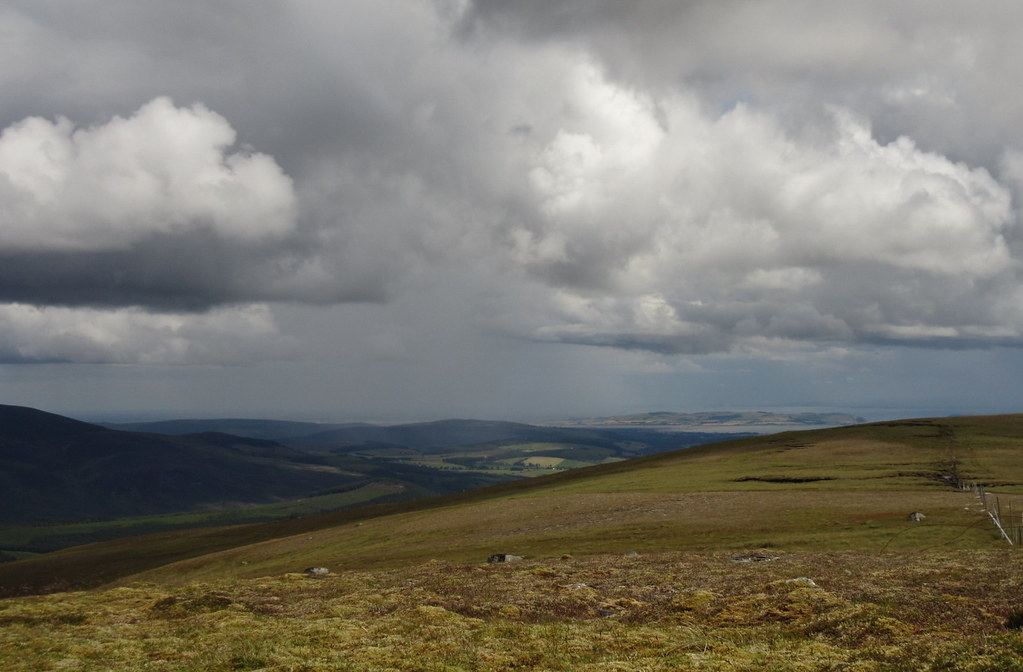 Showers over the Black Isle 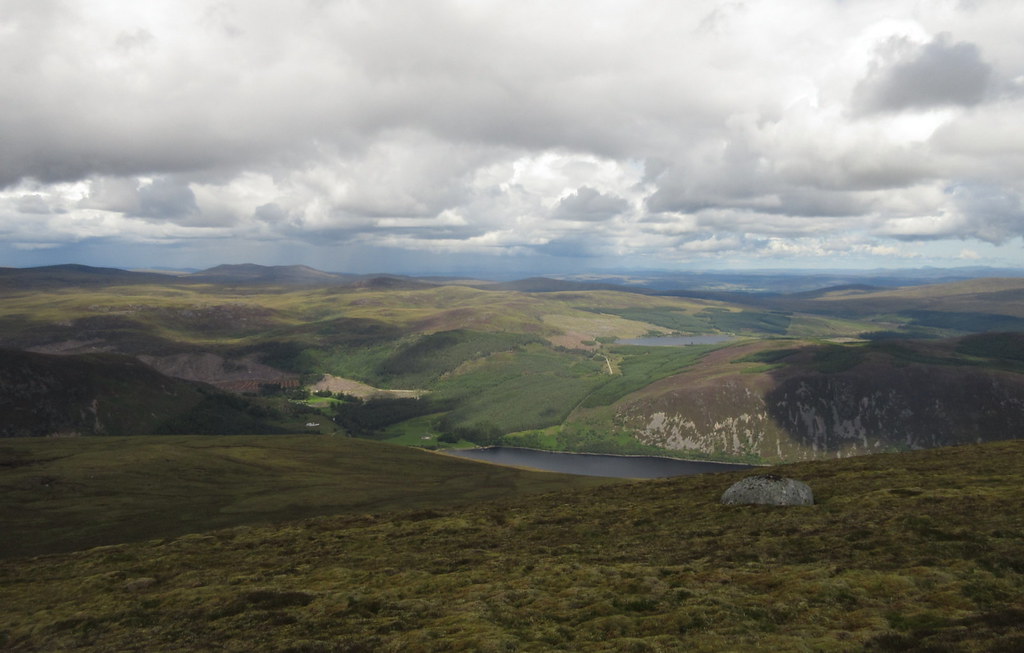 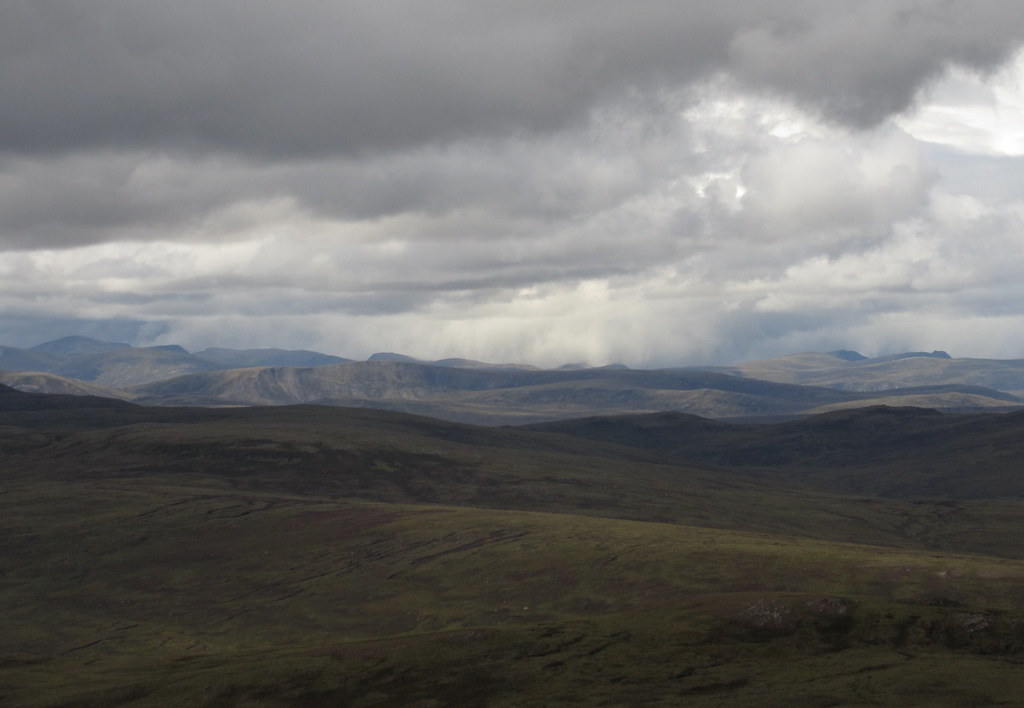 More heather led me up a short, steepish pull onto Meall a' Phuil, where the going was a bit spongy for a while. A shower also hit here, and I didn't pay as much attention to avoiding the peat hags as I should have done, resulting in a harder walk than necessary. Another short pull took me onto Creachan nan Sgadan, which was much nicer - stones and short moss, studded with boulders. A herd of deer charged across the ridge in front of me at this point. 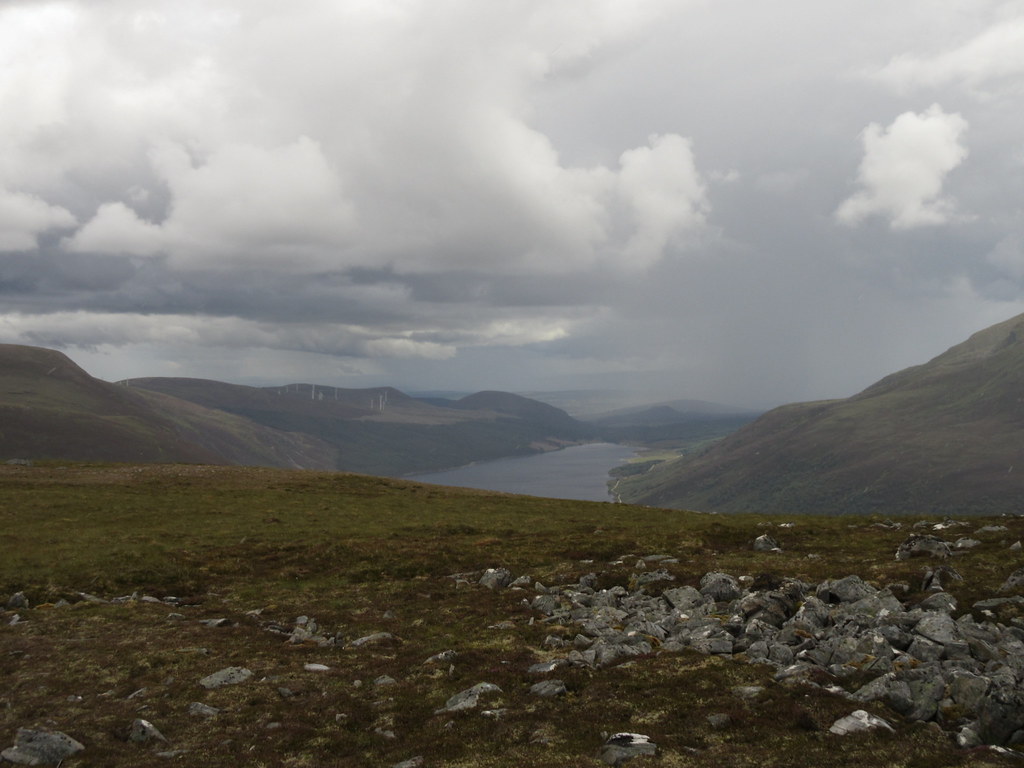 Weather moving in up Loch Glass 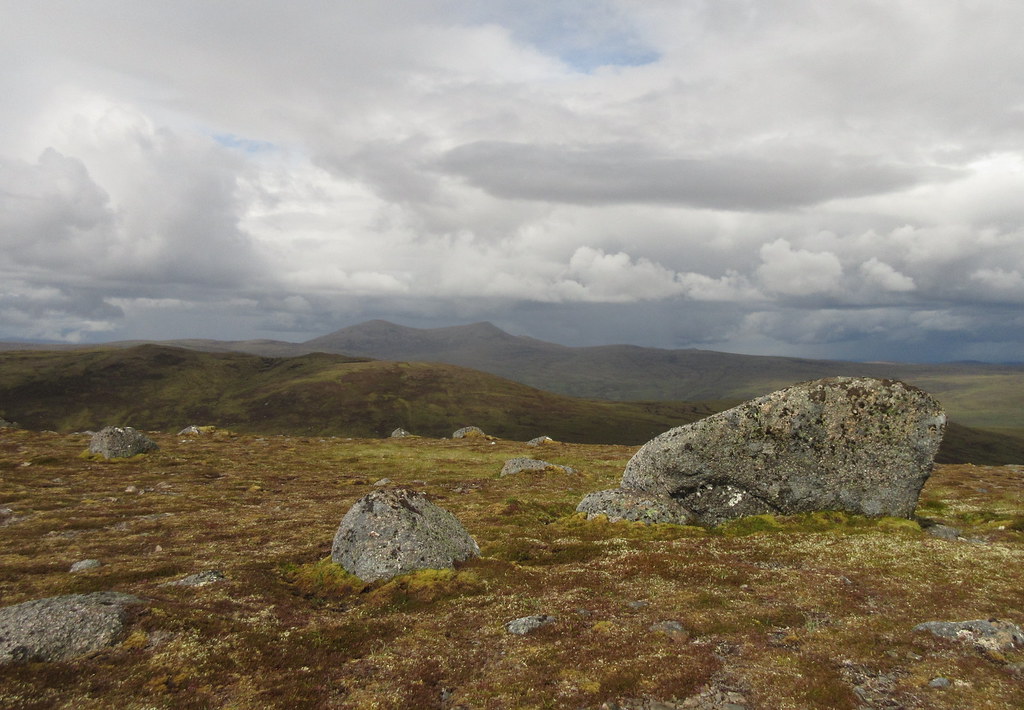 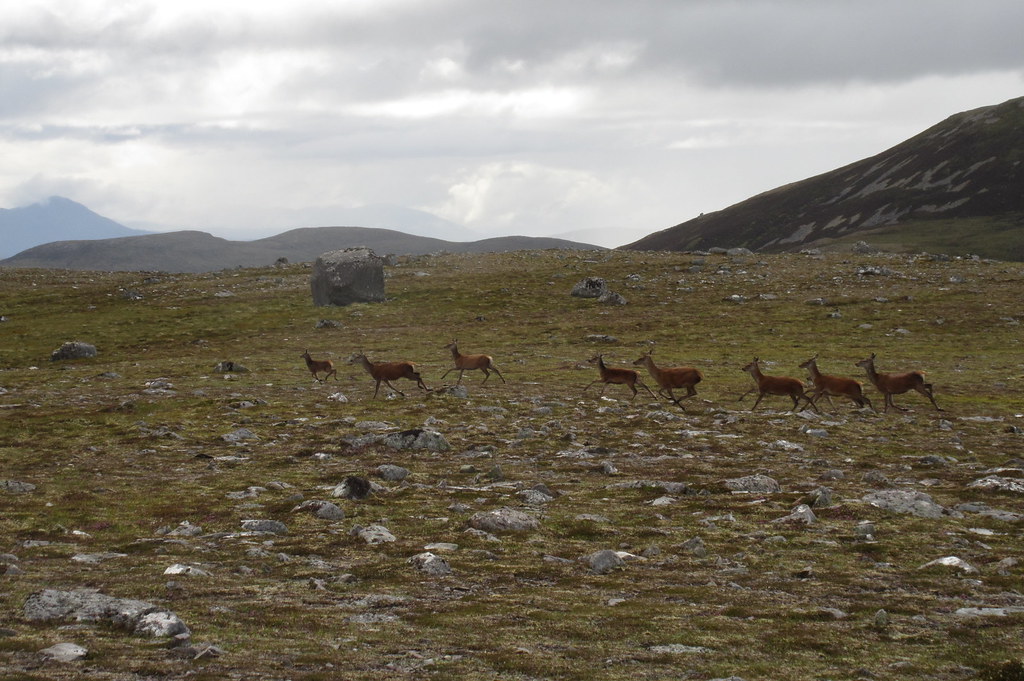 There was still the odd soft area and peat hag to watch out for, but the walking from here to the final ascent of Beinn nan Eun was easy. 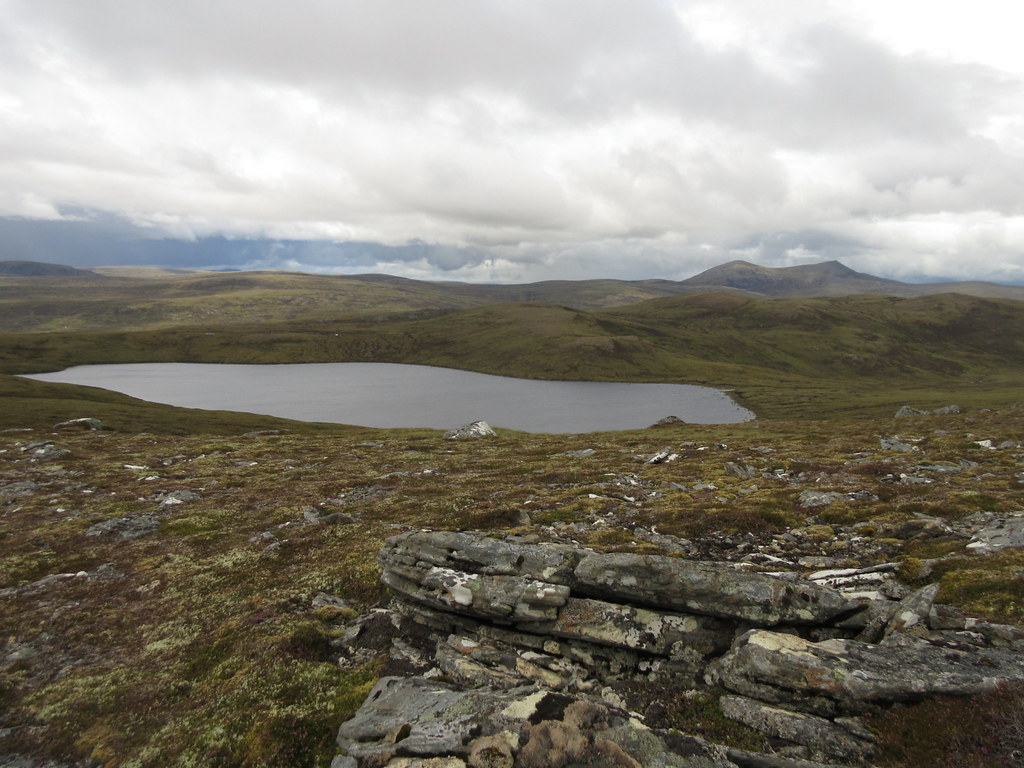 Things greyed over on the summit of Beinn nan Eun again, so I didn't hang around. I was hoping to perhaps see the eagle that had been perched on the summit cairn last time I was here, but there was no such luck. Out of water and feeling thirsty, I dropped down to the Abhainn Beinn nan Eun to top up with water and have another break. 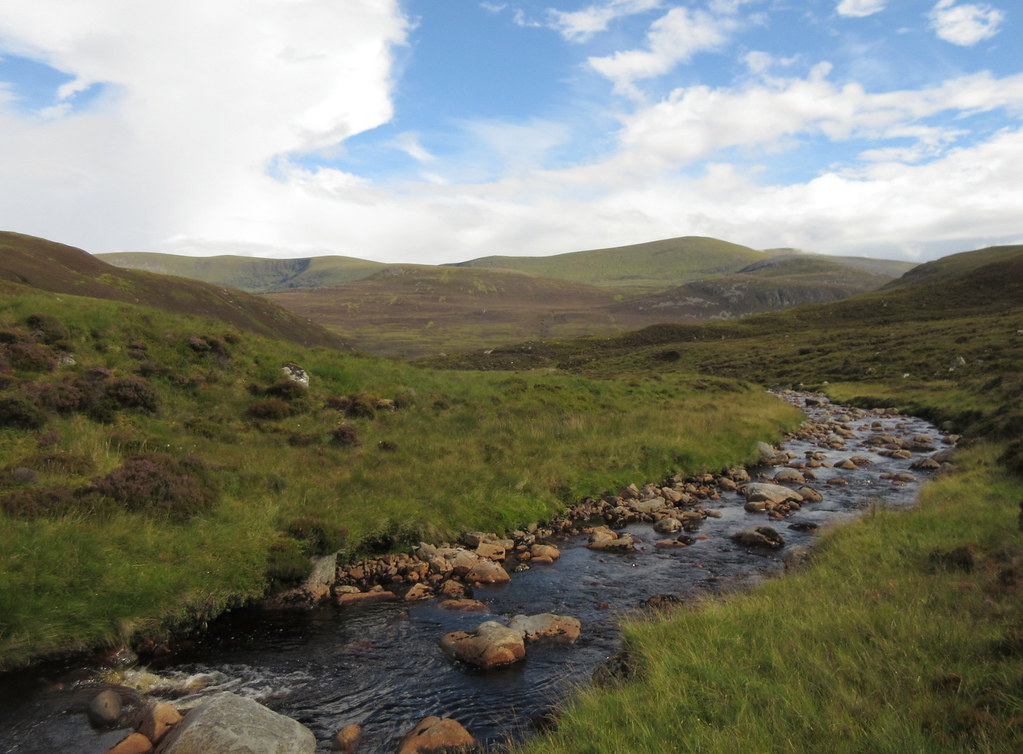 I think I had decided quite some time back that I wasn't going to go up Carn Loch nan Amhaichean today. Having been up from this side before, it looked like it would be worth a visit from Strath Rannoch in future instead.

Heading down towards Wyvis Lodge, I could see the top weir of the new hydro scheme right above what I remembered to be a nice set of waterfalls. Once there, I could see that the waterfalls hadn't been ruined as I had feared, although the access track will take a few years to blend into its surroundings. 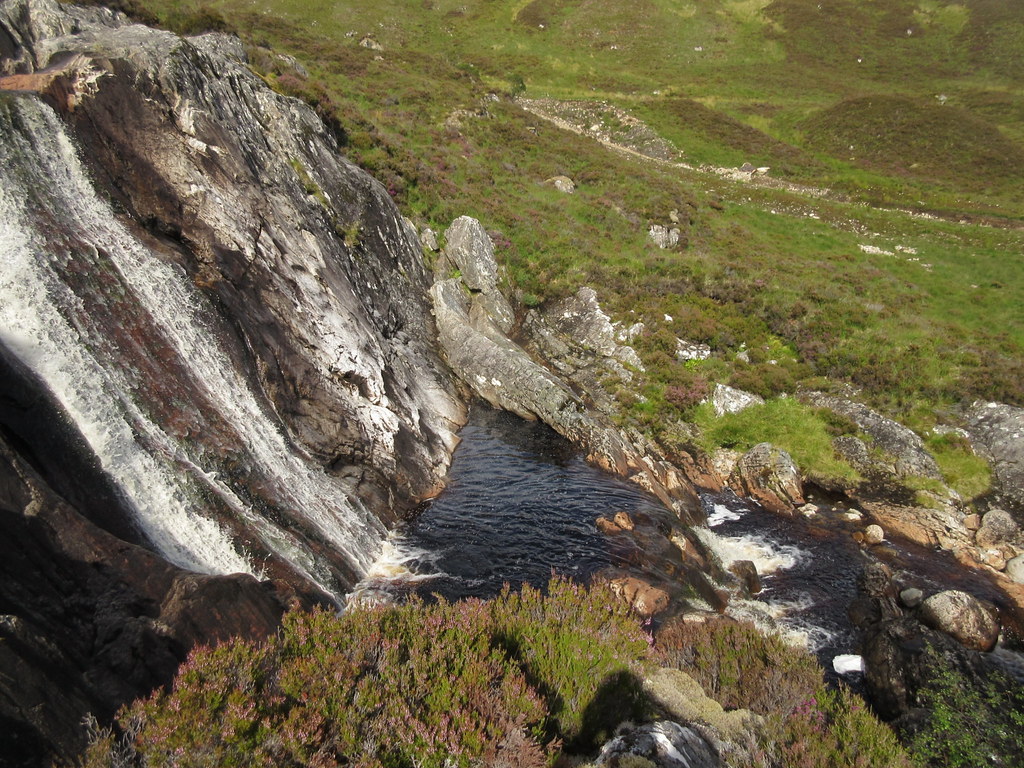 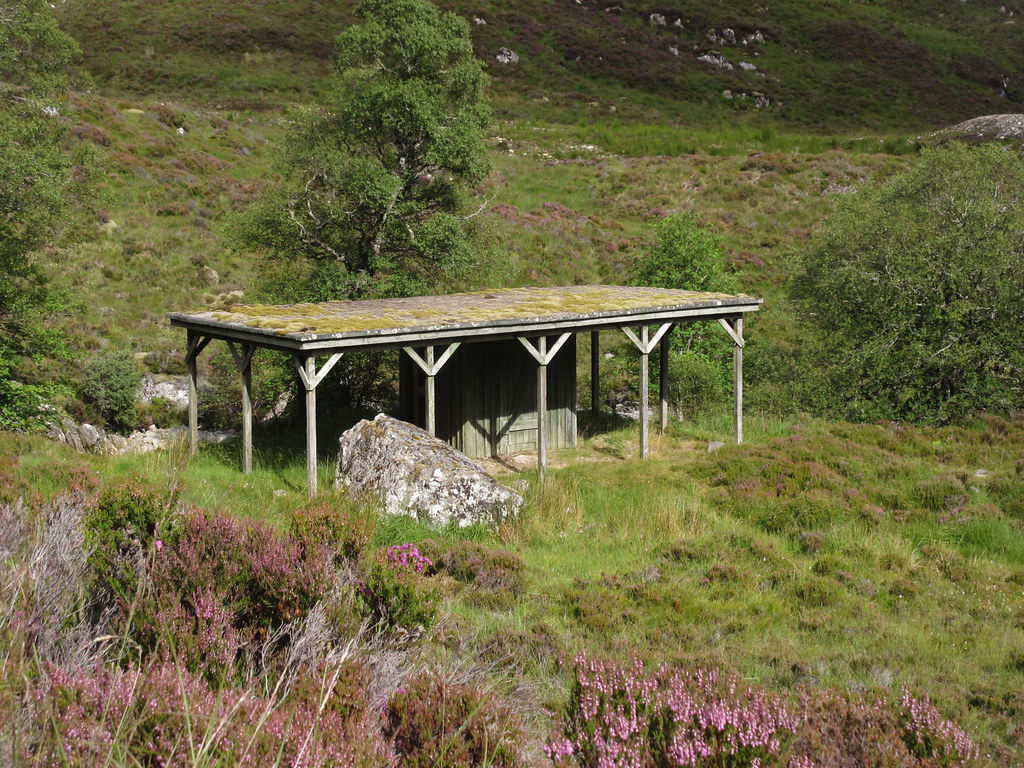 Shelter next to the waterfall

I had a quick nosy in the shelter at the foot of the falls (there is a small shed in the centre of the open sided roof, but you'd need to be quite desperate to stay here overnight), then crossed the river to get a better view of the falls. Once over, I just picked up the new hydro track rather than return to the path. There is a new bridge lower down, and it is only a short 400m or so of track that diverges from the line of the old path. I suppose this makes it possible to cycle slightly closer to Beinn nan Eun than was previously possible, although most of the time gain would be down to the improved surface from Wyvis Lodge. 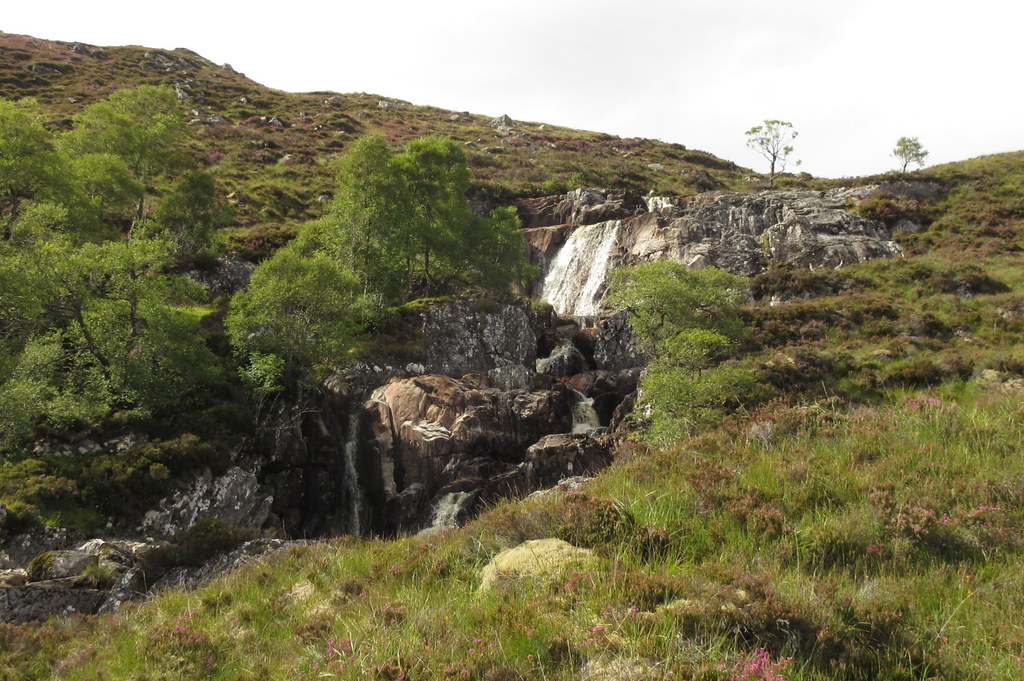 It was a nice stroll back to the bike in the warm afternoon sun, looking up at the northern corries of Ben Wyvis and thinking about other possible routes in the area. 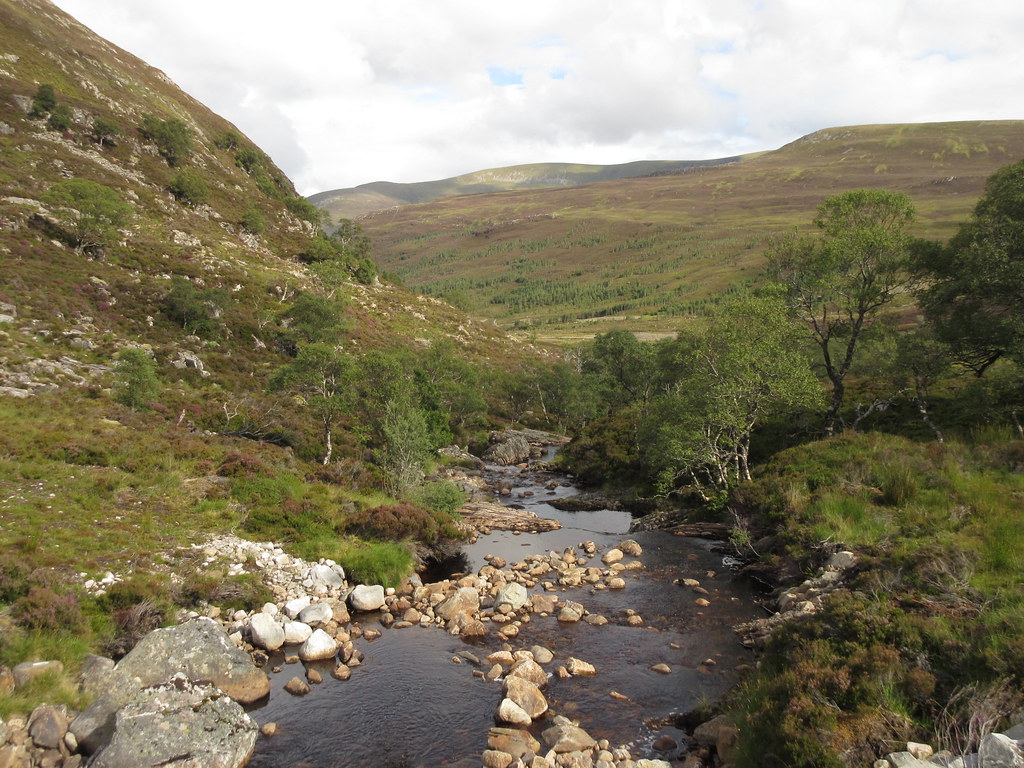 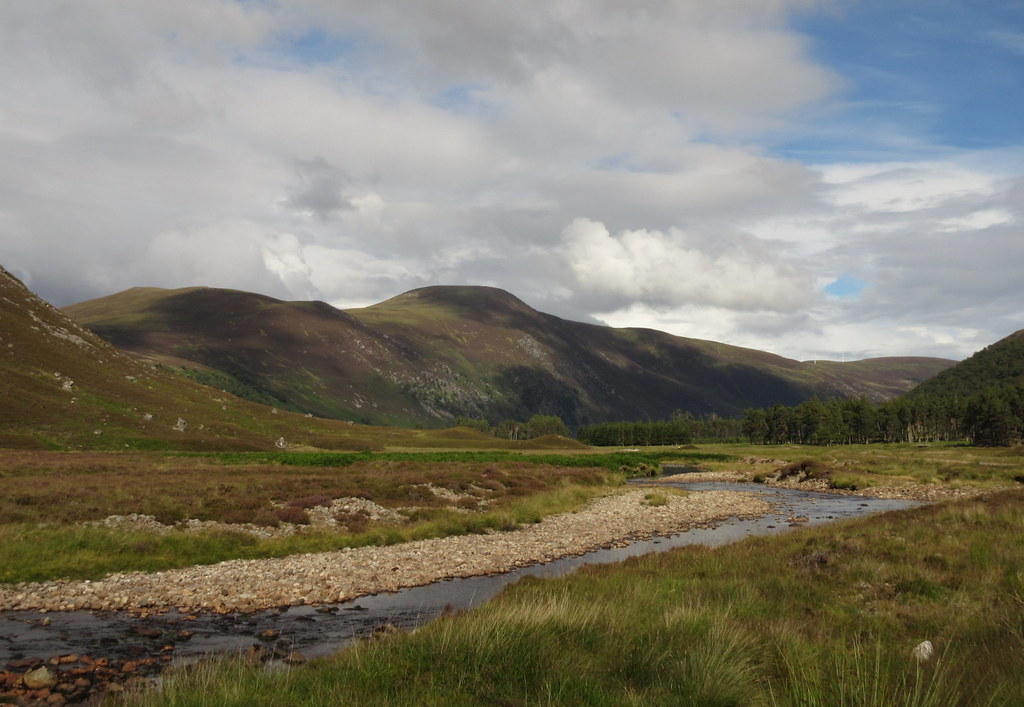 A speedy cycle saw me back at Eileanach Lodge and the car at 6pm. On the drive home, the heavens opened and the cloud descended onto the hills I had spent the afternoon on - good timing! 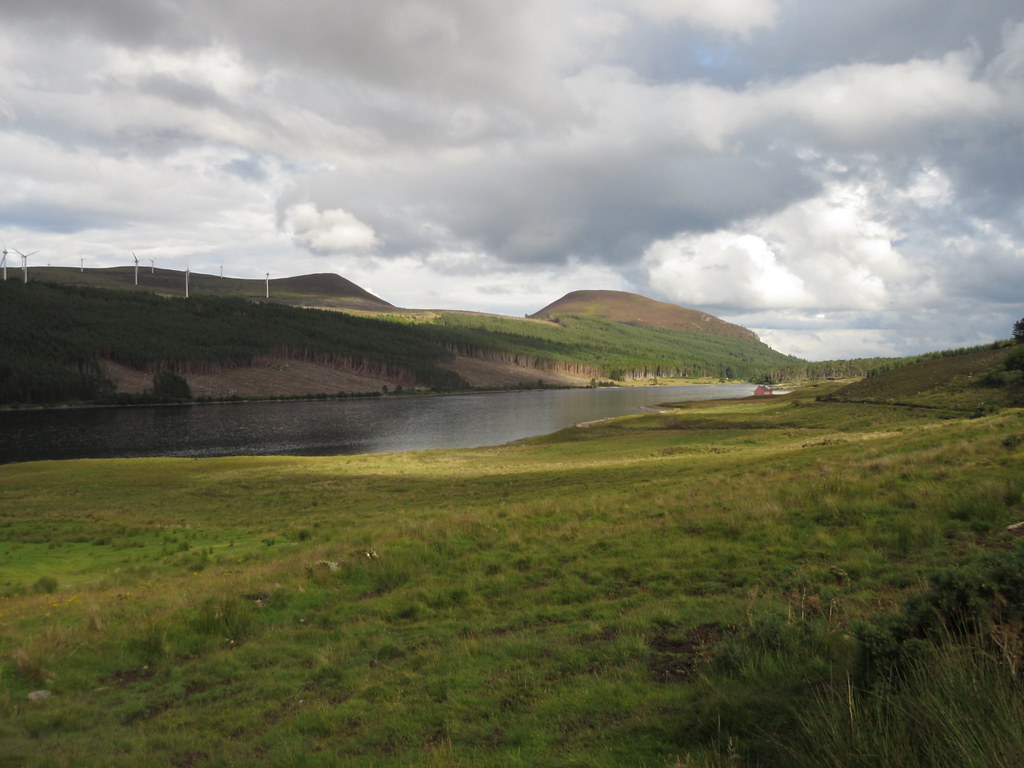 Meall an Tuirc across Loch Glass 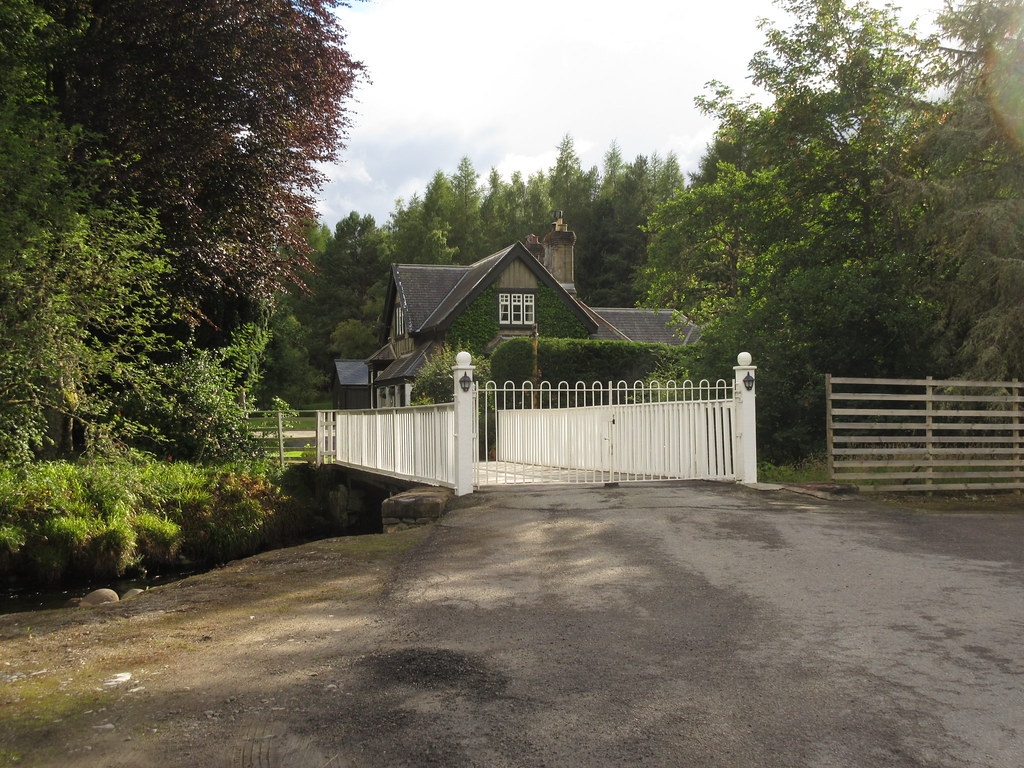 Re: Round the back of Wyvis: Meall Mor and Beinn nan Eun

It's the last Graham in the area we haven't done yet and it's bugging me...

We tried the Strath Rannoch approach to CLA earlier this year and we liked it, though weather was rather nasty. So windy that we abandoned any hopes for traversing to Beinn nan Eun. The track up the glen is good for cycling but I guess the area would be a no-no in peak stalking season.