Evening sun on Conival at the end of the walk

Day 3 in Assynt, and a third day with an excellent weather forecast - in fact, this was supposed to be the best day of the week, with plenty of sunshine and rare light showers. Ben More and Conival - Assynt's only two Munros - were on the menu today, with the path handily starting from right outside the hostel at Inchnadamph where we were staying. The route below shows our detour to the Traligill Caves on the way up:


Ben More Assynt.gpx Open full screen  NB: Walkhighlands is not responsible for the accuracy of gpx files in users posts

Setting off up the River Traligill and it already felt like it was going to be a scorcher. Suntan cream and sunhats time... A good track leads to just beyond Glenbain, which is then replaced by an equally good path. This soon forks, with the left branch going directly to Conival. We'd use this for the return, but for now headed right to explore the Traligill Caves. Just before crossing the River Traligill, we detoured to the right to see where the river flows into a cave - the whole watercourse is underground for half a kilometre or so after this. Looking down the (dry) valley below the cave: Back to the bridge over the river, and this time crossing it to continue slowly uphill to the trio of main caves. Uamh an Tartair is first, with slippery ground around it. You can just see the water entering the cave via a waterfall to the left, before flowing in full view across a rocky slope and disappearing into a sump to the right. The cave's translation is "cave of the roaring" - an accurate description. 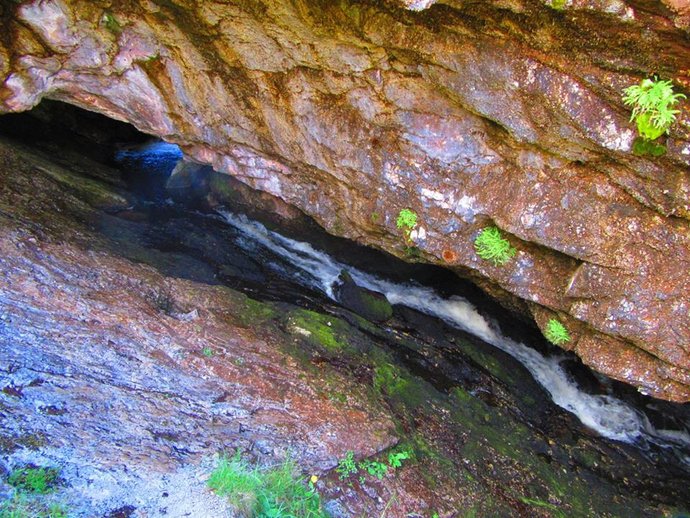 Uamh an Uisge is next (cave of the water), ironically appearing as a dry cave, though water is audible somewhere inside. Good views down the glen from here. 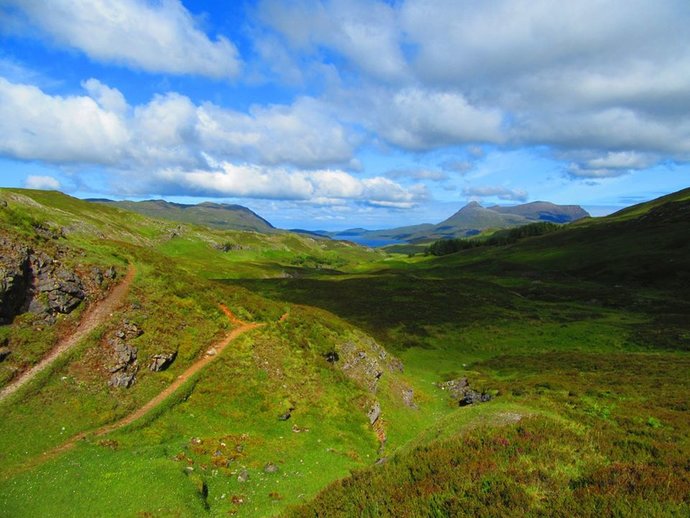 Doubling back above the caves took us to a large pothole above Uamh an Tartair: All of this was very interesting but it wasn't helping us with our ascent of Conival! From here we headed cross-country to rejoin the main path through the glen. This was just a little wet underfoot, with a few depressions to avoid which might have been potholes. Crossing the River Traligill was fairly straightforward, with a scramble up the vegetated bank on the far side to regain the path. From here the path is often excellent for the next mile, though with one scramble to negotiate which is very slightly trickier than it appears here (and would be entertaining if the river was in spate below!): The path becomes boggy in places (interspersed by loose rocky sections) as it steepens and ascends by the Allt a' Choinne' Mhill. Looking back: Several small waterfalls and some distant deer helped distract us from the ascent on this section, before the path ascends a small rock band to gain the bealach. There are two ways up, both cairned at the top (and less obviously at the bottom). The left-hand path is easier (we took this on descent) but the right-hand path is more entertaining, and looks clearer from below so we headed up this way. Both are still easy scrambles. The rock band from below (photo taken on descent): Looking up the right-hand scramble: And back down from the top of it: Lunch no. 1 at the bealach. The views take on a new dimension above, with the bare ridge between Conival and Ben More Assynt coming into view as well as Beinn a Fhurain's craggy east face appearing. Deer with the ridge beyond: The gradient eases on the final approach to Conival's summit, becoming grassy underfoot (a nice change): Looking back (photo taken on descent): It had been growing steadily cloudier overhead for the last couple of hours, and cloud had intermittently been shrouding Quinag to the west. We reached the shelter cairn at the top of Conival for lunch just as the mist rolled in - but it was only spoiled the views for a few minutes before lifting again, revealing the wonderful landscape to the south: Last but not least... the ridge ahead (photo taken on descent): There's a short scramble to descent at first, and the rest of the traverse is rough, undulating and often on boulders. Tiring going, but with great views, and not long until Ben More - the highest summit in Assynt at a shade under 1000 metres. 17-mile long Loch Shin is the main addition to the view, stretching halfway across Sutherland from west to east. Back by the same route, but without the detour to the caves. A really interesting walk with plenty to see both in the glen and on the tops. Nothing particularly tricky, but overall a tougher than expected route with quite a lot of rocky ground making for slow going.

Not such a good weather forecast for the rest of the week, and in any case three long hill days in a row was probably enough!