Something happened to my left leg in early May. We had four long days of walking in Strathfarrar and Affric, and three days later I went up Roseberry Topping (4k, 200m ascent). Coming down my right leg started to hurt and for a few days I could barely walk. It was some kind of overuse injury/compartment syndrome. Strict instructions to rest PROPERLY meant the cancellation of our planned holiday in late May when we had planned to get lost in the Benalder Forest. Anyway it was 12 weeks since I had been up a Proper hill and I was a little anxious. We'd just had a week in Islay with my mum and done some lovely walks without problems, so now was the time to go for it with a more gentle expedition than our usual.
Due to not booking early enough we were due to leave Islay on the Friday evening ferry arriving at Kennacraig at about 8.40pm.
Plan A had been to stop on the way back from Islay to go up Beinn Buidhe at the head of Glen Fyne and we even took the bikes all the way to Islay to facilitate this. However the forecast was terrible with strong wind, heavy rain and low cloud - worst in the West. We decided that Beinn Buidhe was best kept for a day with a view.
We're running out of Munros easily accessible from the road between Islay and Yorkshire, so plan B was hatched. We would drive to a parking area just past Dalmally, sleep overnight in the car, have breakfast at the Real Food Cafe (highly recommended) buy the maps we had omitted to bring at the Green Welly (due to not having thought of plan B until we had arrived on Islay) and aim for lunch on the top of Ben Chonzie.
Now we have been led to believe that Ben Chonzie is a boring hill whose main recommendation is that it is an easy climb and a relatively short walk. However as we know the Scottish weather is not to be trifled with.
There were quite a lot of cars in the parking area and we said hello to several people who set off as we were faffing about including two young women who set off at a good lick up the track. We were passed by two gentlemen one of whom told us that he had encountered horizontal snow up there a month earlier. setting off up the track just past the houses

We eventually got set off about 10.30 am and followed the track up going into the cloud at about 650m height. view down Glen Lednock not long after the start all very green - must have been a wet summer so far... An Dun in the foreground looking back along the track. Just beginning to show some purple in the heather. splash of colour from some thistles 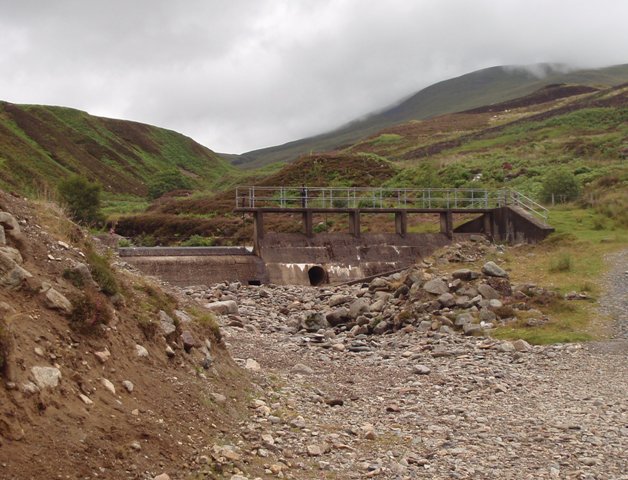 That was a difficult burn crossing!! all the water has gone into the intake here 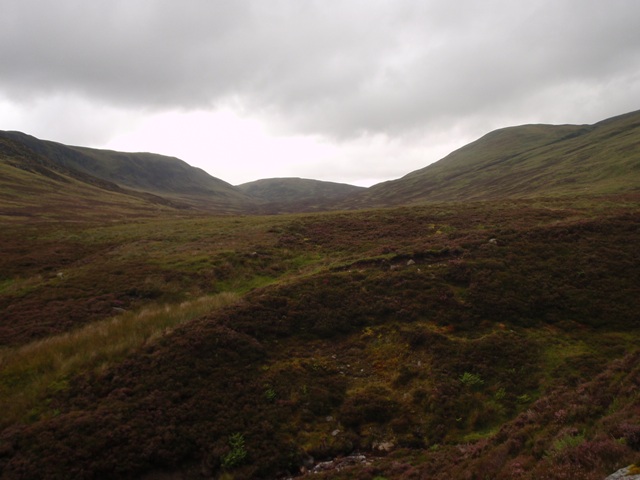 a track goes up the glen over the top to Glen Almond, part of the Scottish National Trail and joining the Rob Roy Way for a short distance. Oh, yes, and we saw an eagle here.

Turning left at the big helpful cairn we followed the path which was at times quite muddy but not really any problem. The rain came on as we got to the ridge and we soon came to the line of fence posts which is followed all the way to the top. So no problems there. As we were following the fence up the two girls we had spoken to were coming down - one of them still in shorts despite the rain - but both in good spirits.
We reached the top and it was really lovely to sit in the summit shelter out of the wind where we chatted to the two men who had passed us who were finishing their lunch. We ate our ham and cheese rolls and put on some extra clothes for going downhill into the wind.
It was not the weather for hanging about so we soon set off back down the way we came. oops nearly forgot the summit pic - this is Rudolph putting his gloves on ready for the descent. and here is a picture of some Ladies Bedstraw on the top of Ben Chonzie, At least there was something pretty to see!

After a while we heard voices and then suddenly out of the clag we saw two damsels in distress coming back up again. They had missed the top of the path where it leaves the line of fence posts and got lost. They were heading back uphill in the hope of either trying again or finding someone. They were so pleased to see us that I got an instant hug!
Of course everyone wants to be indispensible so we were pleased to have their company back down the hill and feel somewhat heroic - in fact the top of the path was quite indistinct, so beware in poor visibility! The place to leave the fence posts is when they take their second left turn. The first left turn is about ninety degrees and very distinct, the second left turn is only about twenty degrees, the fence line turns south east, and if you walk just west of south you will not go far wrong.
It was lovely to come out of the clag again as we came downhill and in fact at valley level where normal people are it was quite a nice day.
I didn't take many photos on this walk - too busy walking and chatting. And anyway the visibility was rubbish! I'm pleased to say the leg gave no trouble at all.

Girls must have been thrilled to see you, and how nice to be able to do a rescue without calling out MRT. Bloody legs. Walked 8 miles the other day, and could barely hobble out to the coffee shop today. I think that once I have my proper insoles and boots back on it should work again, but who knows. Hope yours are still behaving.

I did wonder about the comparative lack of reports from you in recent months. Good to hear that your well on the mend.

I do admire your determination to walk, even when the weather lacks clemency ... I'm far too much of a wimp

Glad to hear the legs still work! I find mine quite indispensable for this hill walking lark!

Sgurr wrote:Girls must have been thrilled to see you, and how nice to be able to do a rescue without calling out MRT. Bloody legs. Walked 8 miles the other day, and could barely hobble out to the coffee shop today. I think that once I have my proper insoles and boots back on it should work again, but who knows. Hope yours are still behaving.

been fine so far - better than my sister who slipped in snow and smashed her knee earlier this year - surgery and 12 weeks in a brace - and she has complained a lot less than me!

Alteknacker wrote:I did wonder about the comparative lack of reports from you in recent months. Good to hear that your well on the mend.

I do admire your determination to walk, even when the weather lacks clemency ... I'm far too much of a wimp

was starting to go slightly unhinged without the walking - slightly more unhinged than normal anyway!

Graeme D wrote:Glad to hear the legs still work! I find mine quite indispensable for this hill walking lark!