Track_2017-07-29 131222.gpx Open full screen  NB: Walkhighlands is not responsible for the accuracy of gpx files in users posts

Like many I'd always assumed Ben Hope would be my last munro, so far from home and all on it's own. Then the Walk Highlands meet was arranged for the Kyle of Tongue, it would be rude not to go up there for a weekend of hiking, drinking and laughter!

Lee and I's original plan for Saturday was to go over to Inchnadamph for Conival and Ben More Assynt however the weather forecast convinced us to stay local. Best to get one done in the decent weather forecast in the morning then shelter from the rain in the hostel in the afternoon. For once, the weather gods were more than kind to us, apart from at the summit.......

Being at the start of the walk for 9am was agreed to and we would be joined by Ross and Steve. 9am seemed like a good idea, until I was up until 2am on the Friday night, the things I do to be social

Anyway, I did manage to get out of bed on time (just as well since I was the driver) and we did start the walk bang on 9am after carefully negotiating the single track road down the side of Loch Hope. As soon as we got out of the car the midges set about having their breakfast so we didn't hang about and headed straight up the hill, which is pretty much how this walk goes. No easing in at all. 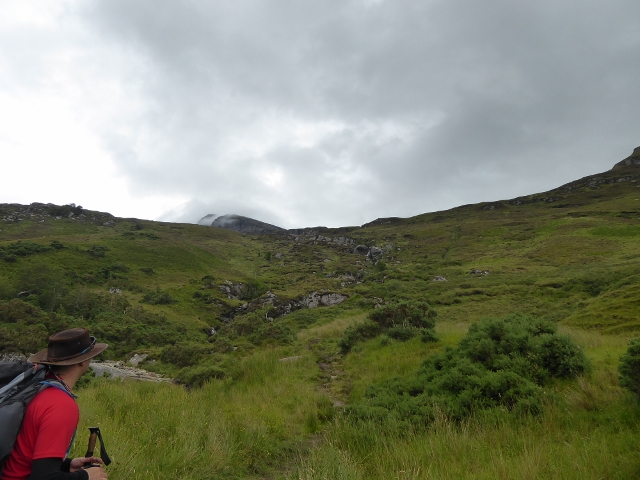 As you can see the cloud was covering the summit but I could live with that over getting rained on. I was sure we'd get some sort of view at least, as I was really looking forward to a birds eye view of the great wilderness of Sutherland. We'd not seen much due to our late arrival on Friday.

The path was good and easy to follow. It was wet and muddy though and the gaiters were a handy bit of kit to have. It was overcast but after a bit of walking the view to the south began to open up. The path pretty much follows close to the edge of the cliffs on the west side of the mountain. Too far left and it would be a really quick descent! It's really not difficult to follow so we kept wandering uphill, chatting away and hoping the cloud would lift just a little bit. Once we got up the last steep bit of muddy path through the heather we got onto quite a wide rock field and got the first views to the north but we were just below the cloud. Looking west from the rock field

I was starting to think my views were going to escape me, then there was a brief bit of drizzle and this happened. The cloud was still stubbornly hanging about the last few hundred metres and we were starting to meet the early risers who reported there was no view at the top. Took us just over 2 hours to get to the summit and right enough we were surrounded by cloud and the wind had picked up a bit. There was a big wind shelter around the summit so we hunkered down around that to have something to eat and wait to see if the cloud lifted. I spent some time locating the geocache that was hidden at the summit. Found it without too much bother, my most northern geocache on my most northern munro. Unfortunately the weather turned for the worse and started chucking it down so we all scrambled for waterproofs. We stayed at the summit though. We were in no rush, were warm, dry(ish) and fed so might as well wait for a bit. We were teased with a fleeting glance of the view north which disappeared before I could get my camera ready. After 40 mins we decided the weather had won, got a summit pic and headed back down the way we'd came up. It didn't take long for us to drop out of the cloud and I noticed it was lifting as we could now see many of the summits around us including a big grey lump directly to the west that looked awesome with the sun hitting it. Since the weather was better we wandered over to the cliff edge to get some better shots up and down the valley. On the way down I realised the stream on the edge of the path falls over some impressive waterfalls. Not sure how I missed that on the way up since it is right next to the path but I started trying to get arty with my photos 4 and 1/4 hours later we were back at the car and thankfully there was more of a wind so we were able to get changed in peace. We were back at the hostel for just after 1pm and got this view of Ben Hope on the way back which confirmed there was no way I would have got a summit view, but was a cracking vista all the same. We later found out that Tommy and his group had got views at the summit! They were about 30 mins behind us, talk about perfect timing!

Back at the hostel the weather forecast appeared to be utterly wrong as it was getting sunnier. Lee and I had thought about doing Ben Klibreak on the the same day but the mojo for that idea had gone so I suggested heading to Durness as I'd heard the beaches were stunning. Not only are the beaches stunning but the drive to them is awesome too. A perfect ribbon of excellent tarmac for me to have some fun on (whilst avoiding the occasional sheep and dithering tourist in a camper van

) Admittedly we were being touristy too and turning into every stopping place that had a view but at least I was using my mirrors before I slammed on the brakes!

First stop was for the view of Loch Eriball with the old Limestone kiln built into the island.

Then onwards to the beaches. First was the one with the zipline over it.

Then we saw a sign for Smoo Cave. Someone had mentioned this to me the night before so I thought it would be worth a visit, and it was. Quick climb down the path from the car park and we got right into the cave which is really cool. Luckily my camera picked up a lot of the colour in the rocks. Just down the road from this was Sango Bay. This was three pristine beaches separated by some rocky outcrops. We clambered out onto the rocks as far as we could to get some pictures. The water was crystal clear and looked so inviting. Too bad I didn't have my budgie smugglers with me

We sat on the rocks here for a while watching and trying (but failing) to get pictures of the gannets that were dive bombing the fish just off the beach. The final stop on our tour was the main beach at Balnakeil Bay which despite being busier was still spotless and beautiful. We walked along the main beach to get to the smaller one on the east of the bay but the weather was looking a bit unfriendly with a storm coming in from the west. Luckily the wind blew the storm inland so we were able to walk to the smaller beach, which was untouched bar one set of footprints, and back along the top of the cliffs peering down at all the little sandy inlets only accessible by boat. We drove back to the Smoo Cave Hotel for dinner then back to the hostel for what many people have said was the best quiz ever to have taken place at a WH meet

. On the way back we got a stunning view of Ben Loyal from the far end of the causeway to Tongue.

This area is absolutely stunning and totally worth the 6 hour drive from the Central Belt. I'm so glad I had the opportunity of a weekend here to explore rather than a quick trip to do the hills. I've not stopped telling people about it since I got home and encouraging them to visit this beautiful area.

Pics I couldn't add to the report. The little beach at Balnakeil Looking out over one of the coves Ben Loyal on the way back to the hostel

Stunning area!! My 2nd visit this far north and won't be my last

Jaxter wrote:Stunning area!! My 2nd visit this far north and won't be my last

No flags on the summit this time and I had a good look about it before I found the geocache.

Totally agree, an absolutely stunning part of the country. I loved dithering about there in my van this summer