From crowd to loneliness - Lochnagar on Ascension Day

From crowd to loneliness - Lochnagar on Ascension Day


The weather on this Ascension Day was as good as predicted, not a cloud in the sky. The drive from Braemar to the Spittal of Glenmuick car park was nice, and I was very lucky at Bridge of Muick to turn off into the single lane road just before a big coach arrived - there was a group of cyclists on the road, which even with my very small car was difficult to pass.
At the parking, the ticket machine did not accept the new pound coins yet, and that was all I had. Luckily a gentleman had enough old pound coins to change, and I was ready to go. It was already quite hot, even too hot for my taste. My comfort zone ends at 23 degrees - colder is no problem as you can always put on more clothes...

My goal was to do all five of the White Mounth Munros, and include the Corbett Conachcraig. There was no path to Conachcraig in the map, so I started going straight up the hill at some point. Mistake. The slope was steep, the ground not easy with rocks strewn between heather. I struggled uphill until I finally reached the summit with a rather disappointing view, somehow I had expected more.
At least Lochnagar was in view, partly covered by Meikle Pap. 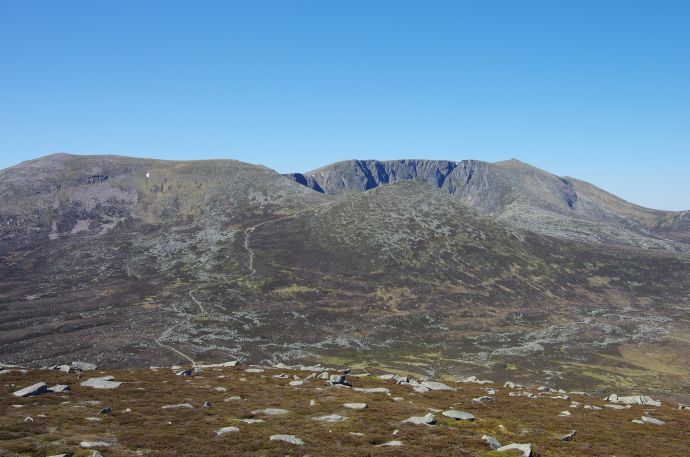 Meikle Pap with Lochnagar behind it, Cuidhe Cròm to the left

When I went WSW to reach the path up Lochnagar again, I found a small but good path coming up from the bealach. Going up and down Conachcraig could have been so much easier, with a lot less energy spent so early in the day... 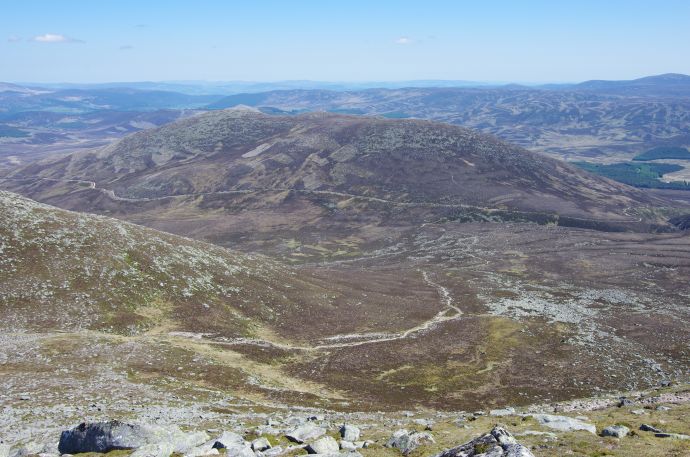 View towards Connachcraig, the path going up is just visible

On the main path from the parking to Lochnagar, there were quite a few people, and when I reached the base of Meikle Pap, I saw a guy disappearing behind the shoulder. His walking style with one pole reminded me a bit of Bertrand the Belgian (name and nationality changed), whom I had met the day before on Tolmount and Tom Buidhe. 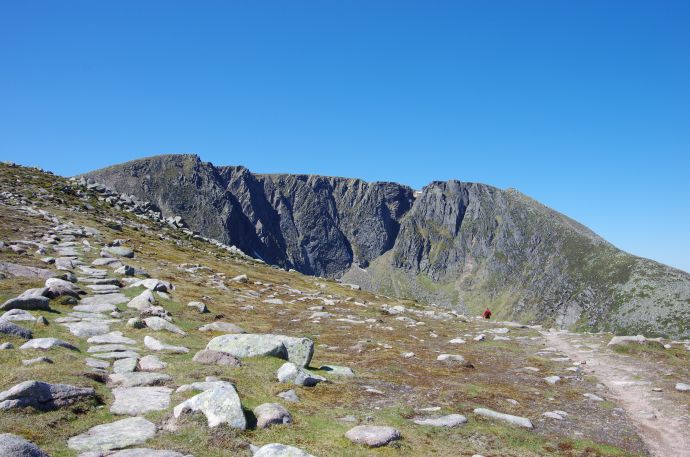 Climbing up the stone steps in the heat took its toll on me, and I was glad to take a break and enjoy the view of Lochnagar proper and the steep cliffs surrounding it on two sides. 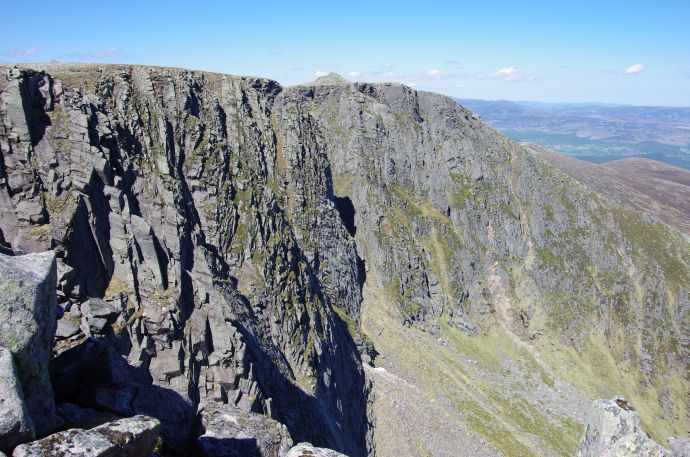 Feeling refreshed by the view, I took the path along the edge, passed Cac Carn Mòr on the East side and went for Cac Carn Beag. The summit was quite crowded, so I had to perform my secret summit ritual some short distance down the North side of the summit. 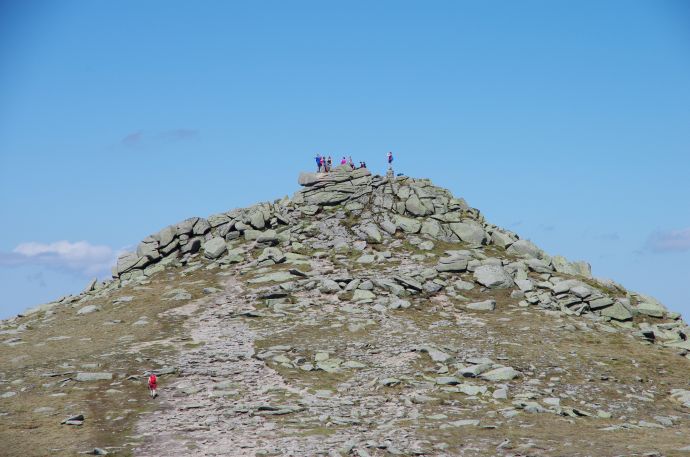 If three's a crowd, this is a throng - the summit of Cac Carn Beag

After a bit of lunch, I went back towards Cac Carn Mòr to pass it on its West side now. About half way, the guy resembling Bertrand was walking towards me some 30 m off. He showed no sign of recognition, but I was quite sure it was him. While I was still making my mind up whether it was him, he was already gone, and I decided against going back again - there was still the main part of the distance to cover, and four Munros to climb.
The evening of the following day, I met Bertrand by chance in a restaurant in Braemar, and we had dinner together. He confirmed that it was him, and he had seen me, but also had his doubts. I was wearing totally different clothes than the day I had first met him, big sunglasses and my "stupid-looking walking hat", no wonder he did not recognize me.

Walking on top of the plateau towards Carn a' Choire Bhoidheach, I suddenly noticed that there were no more people around. Up to now, there was always someone a short distance from me, so it felt quite empty now. I welcomed this feeling of "loneliness", as the crowd with its constant chattering did get a bit on my nerves. I am a rather social kind of guy, but definitely not in "remote" hills... 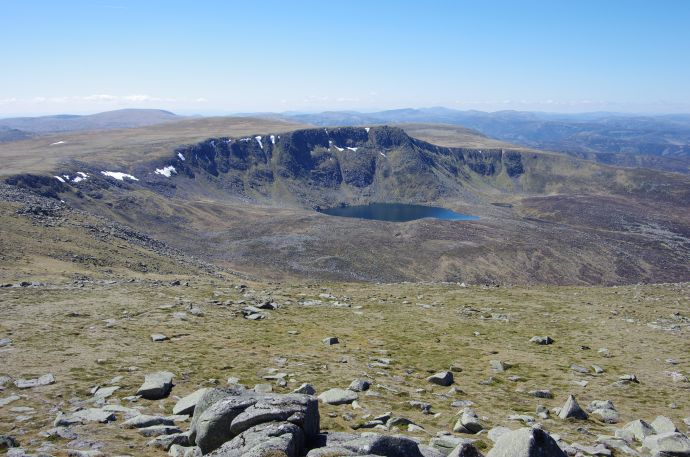 Carn a' Choire Bhoidheach was not very spectacular, and not difficult to reach. Shortly after me, an Englishman living in Glasgow reached the summit, and we had a small chat. He said he wanted to climb all Scottish hills of 500m and more. He said he needed a task which he knew he would never be able to finish, as he had met too many people who had fallen into a mental hole after having completed the Munros, and all they could think of was to go for a second round... 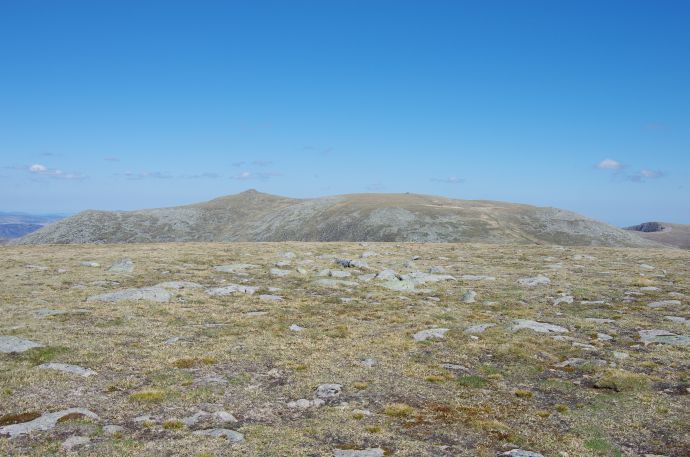 View from Carn a' Choire Bhoidheach towards Lochnagar

Going down from Carn a' Choire Bhoidheach, I met a group of young people going the other direction, obviously a youth group with their custodians. They were the last people I met or even saw for the rest of the day until I would reach the parking again. Quite amazing after the crowd on Lochnagar. One would think more people want to go beyond the point the herd goes, but no...

Between Carn a' Choire Bhoidheach and Carn an t-Sagairt Mòr, Dubh Loch in view

The path up Carn an t-Sagairt Mòr was again not difficult, but I was quite exhausted when I reached the summit. I still had yesterday's walk of 28 km in my bones and started getting tired and even feeling a little cold in the now rather strong wind despite the warm weather.
My B&B host had told me of an old RAF aircraft wreck on the flanks of Carn an t-Sagairt Mòr, so I went around a bit to see if I would find it, but not too far. Which is a shame, because I later found by looking at the GPS data that I turned around not even 100 m from the wreck. Well, next time.

After a good sandwich and the mandatory banana, I felt much better and set out for Cairn Bannoch, the fourth Munro of the day. This one did not look much like a Munro from where I came. Initially I even doubted whether the hill to the right of it (Fafernie) wasn't the higher one, but the map said no. 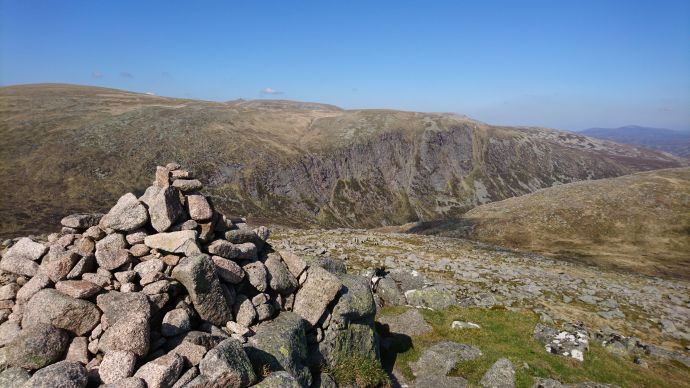 I didn't stay longer than necessary on Cairn Bannoch and went straight for Broad Cairn. This would be the last Munro of the day, and for once I felt happy that the end of the day was near. Only that it wasn't, far from it. 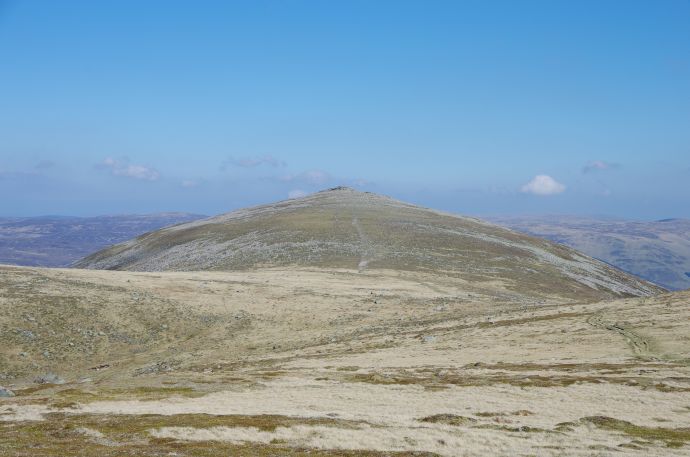 Broad Cairn itself was easy enough, but the remaining distance to the Spittal of Glenmuick was long, almost 10 km, nearly a third of the whole day's distance. 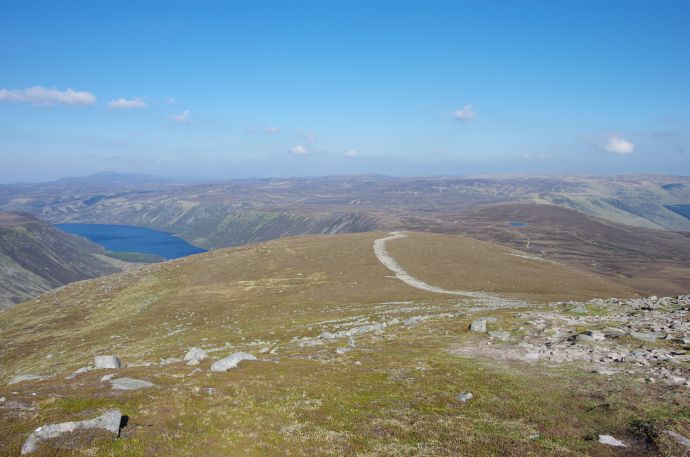 The long way down along the visible part of Lock Muick, and then some...

Well, there was no helping it - it had to be done, so I started trudging along the good path for another 2.5 eventless hours. There was only one difficult section for my tired legs, a steep vehicle track consisting of compacted ground strewn with very small gravel. I loathe this kind of surface, especially when going down with tired legs. To this hillwalker, this kind of surface is almost as slippery than ice - definitely more treacherous, as you know what to expect from ice... 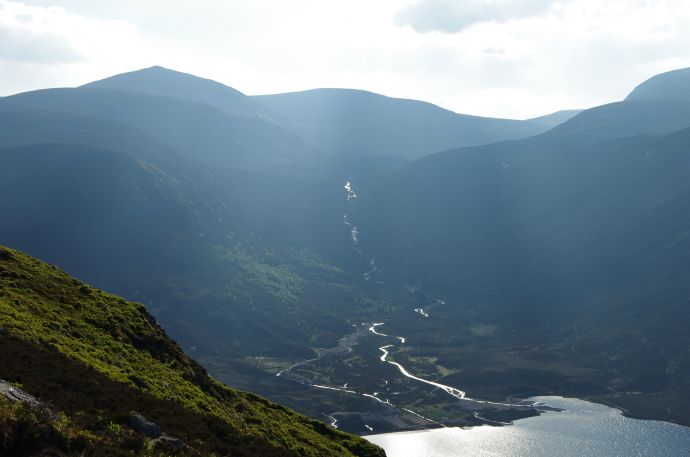 From this perspective, Broad Cairn looks indeed as if it were a Munro... 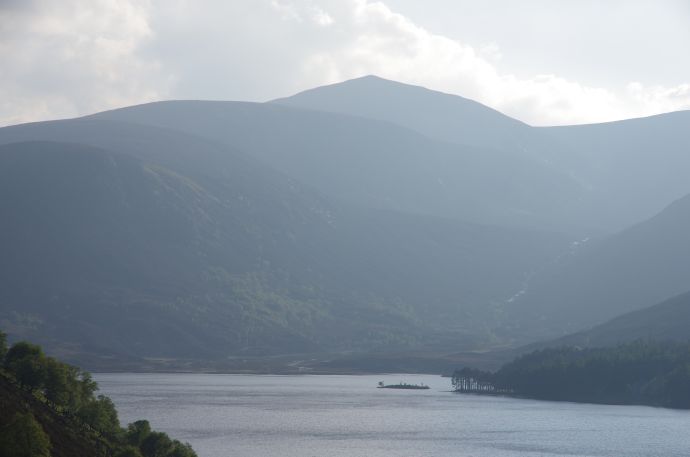 Looking back - no more ascent on this Ascencion Day

I got back to the car ten minutes to eight, firmly deciding to choose a short-distance walk for the following day.
At the same time, I felt quite proud to have done 10 Munros in two days. At this rate, I might even see the project to its end before my 70th birthday...
By all means, the Cider and the Single Malt in the Moorfield later that evening never tasted better.

20170525.gpx Open full screen  NB: Walkhighlands is not responsible for the accuracy of gpx files in users posts

I enjoyed reading that, lovely clear day you had and your pictures are beautiful

mrssanta wrote:I enjoyed reading that, lovely clear day you had and your pictures are beautiful

Great photos, I enjoyed your report and found it really useful as we plan to go that way one day soon. Thank you for posting

Great pics. I'm with you on walking in temperatures higher than 23 Celsius. I struggled up some of the Glen Affric hills last year, with mild heatstroke, in similar weather. Bonne continuation

Thank you agus merci both of you.