Ben Lui and that other one.

Ben Lui and that other one.


I've been saving Ben Lui for ages as I'd envisioned doing it on a special occasion or highlight Munro number. It was hard to drive by it sometimes heading for 'lesser' hills but today was the day I'd finally get to respectfully mount her.

My partner and I would be doing our first Munro together since we bagged Mount Keen just over a year ago. Our schedules very rarely match up and we're more likely to witness unusual planetary alignments than have a day off together with nice weather, with no prearranged plans but on this day it would finally happen.

Set off from Glasgow before 8am and started our walk just past 10. 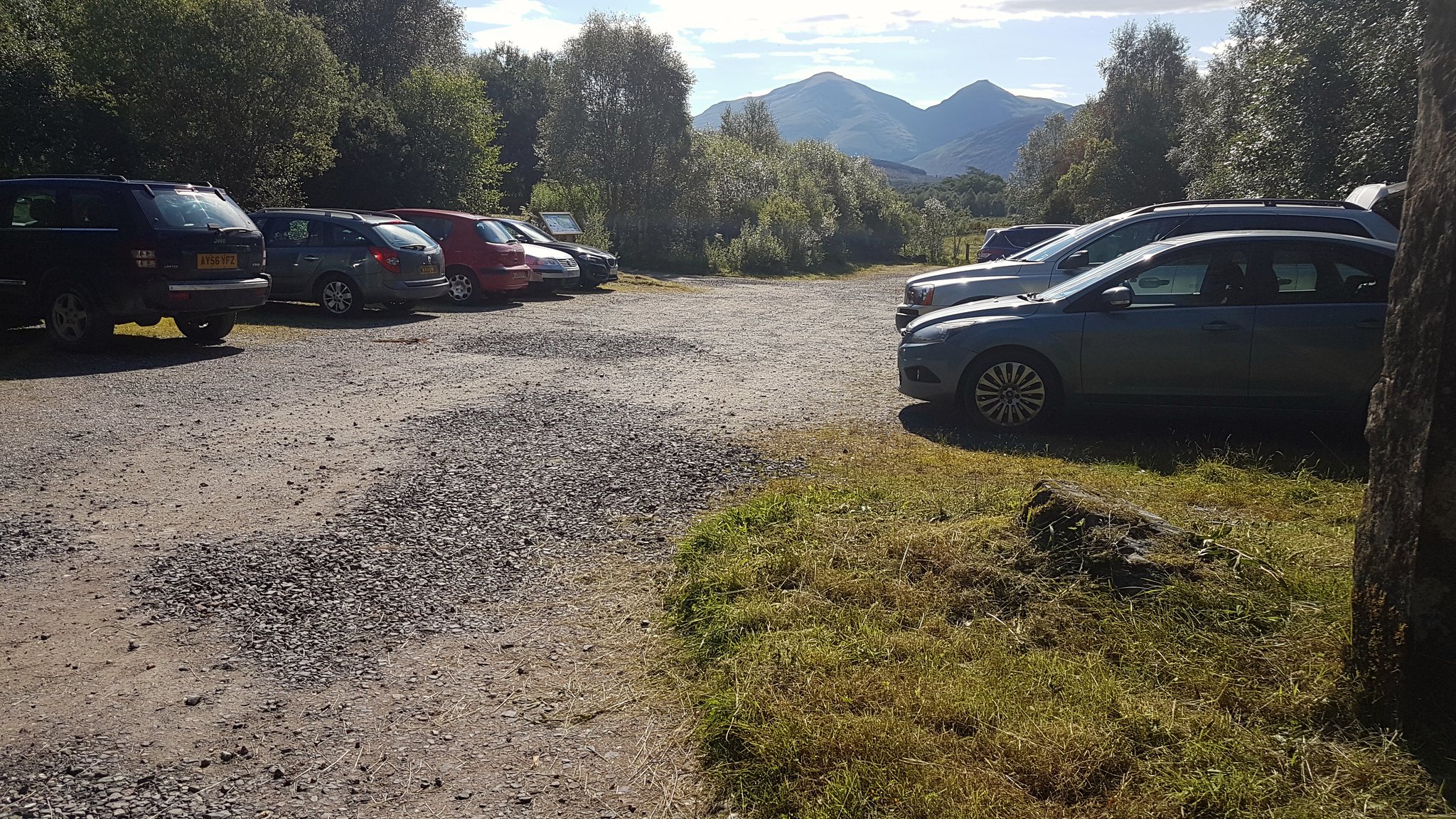 Neither my partner or I have really been that activity this summer so we weren't expecting to burst any time records but no need to rush. 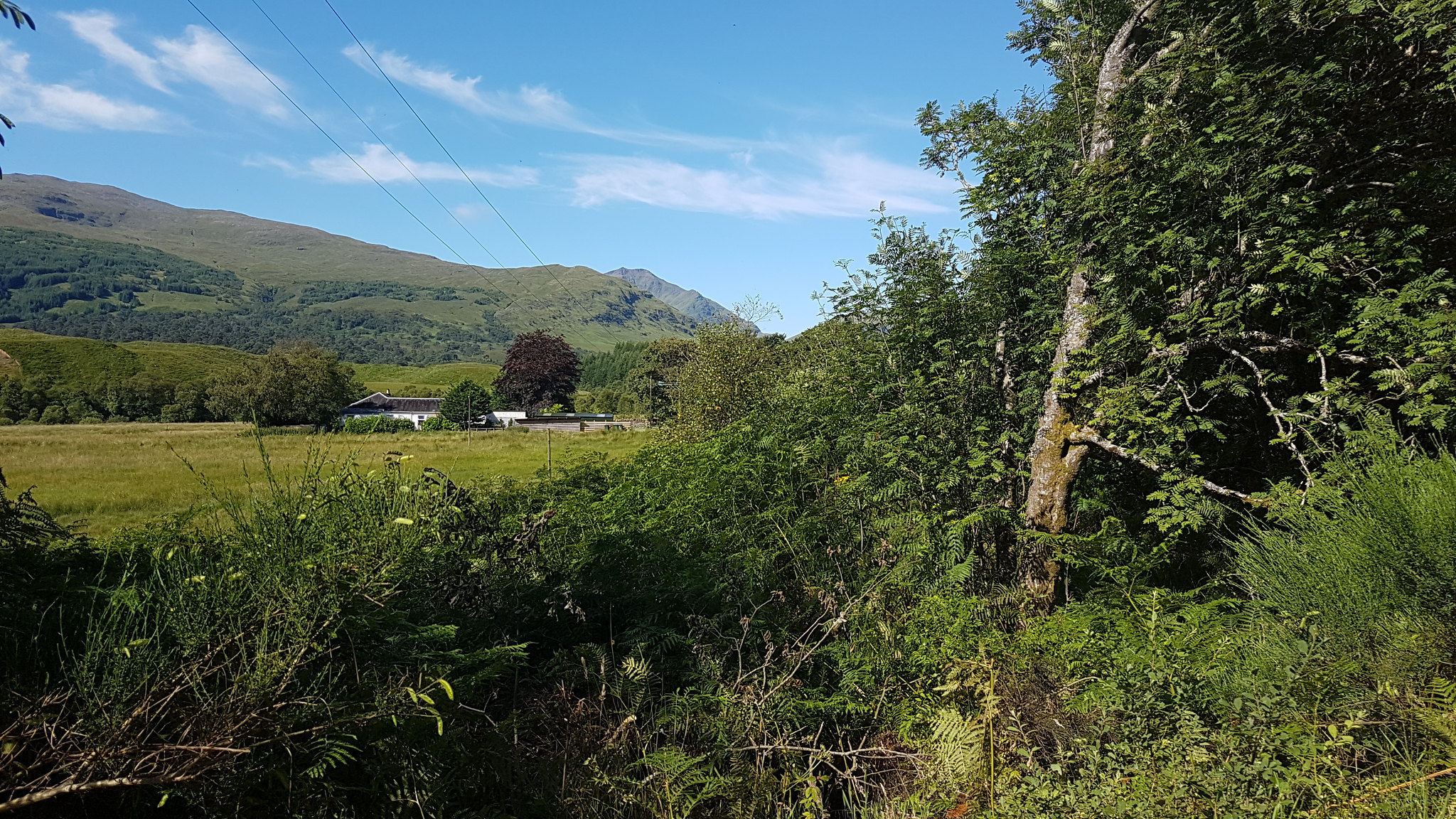 The walk was pleasant enough but the heat was at uncomfortable levels...in my opinion anyways

Not only was the heat a problem for me I also had another 'little' issue... Clegs! It's not an exaggeration to say they were ripping me to bits, it's the 4th of August as I type this and the numours bites to my hands and shines are still very much evident. 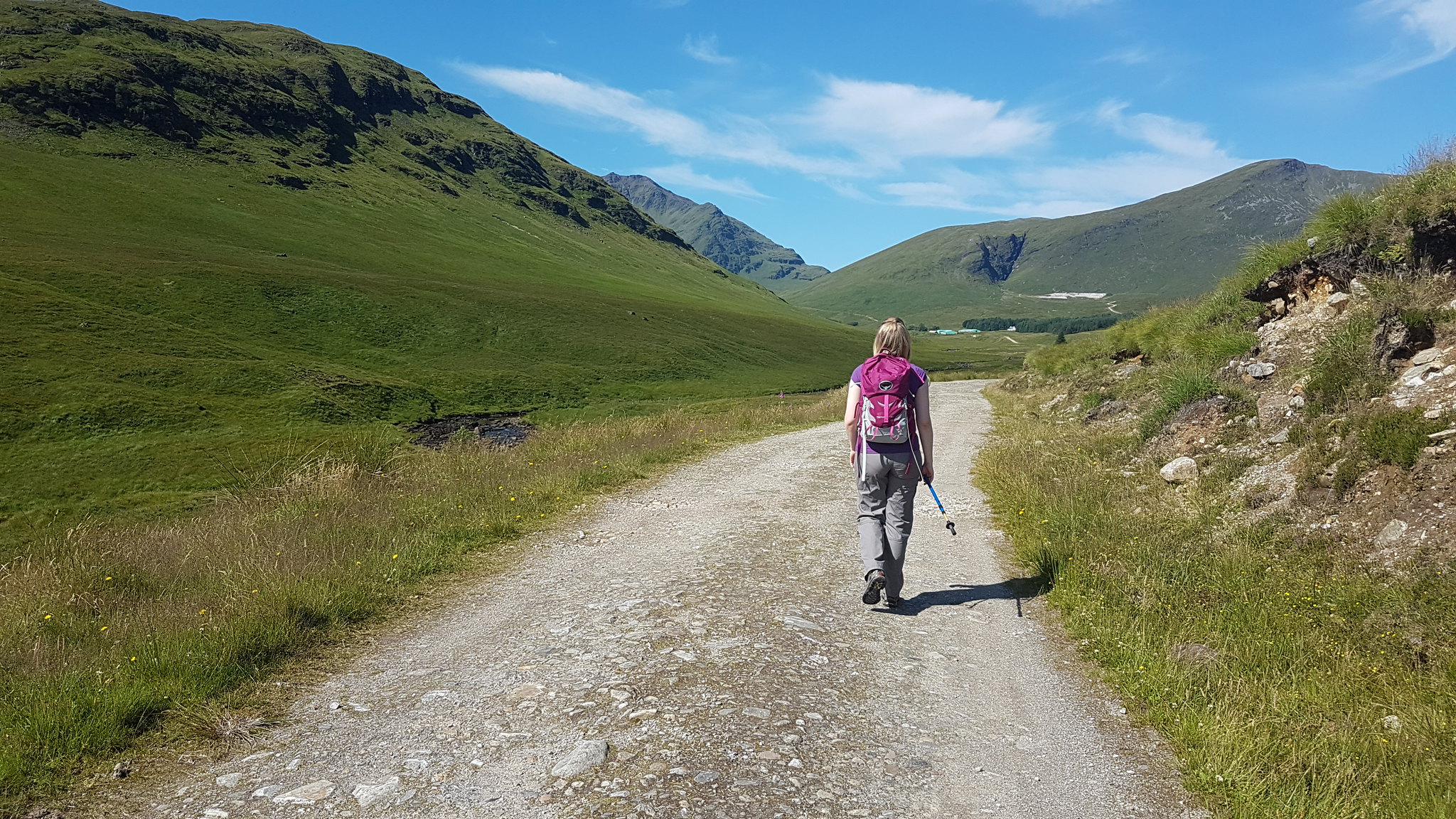 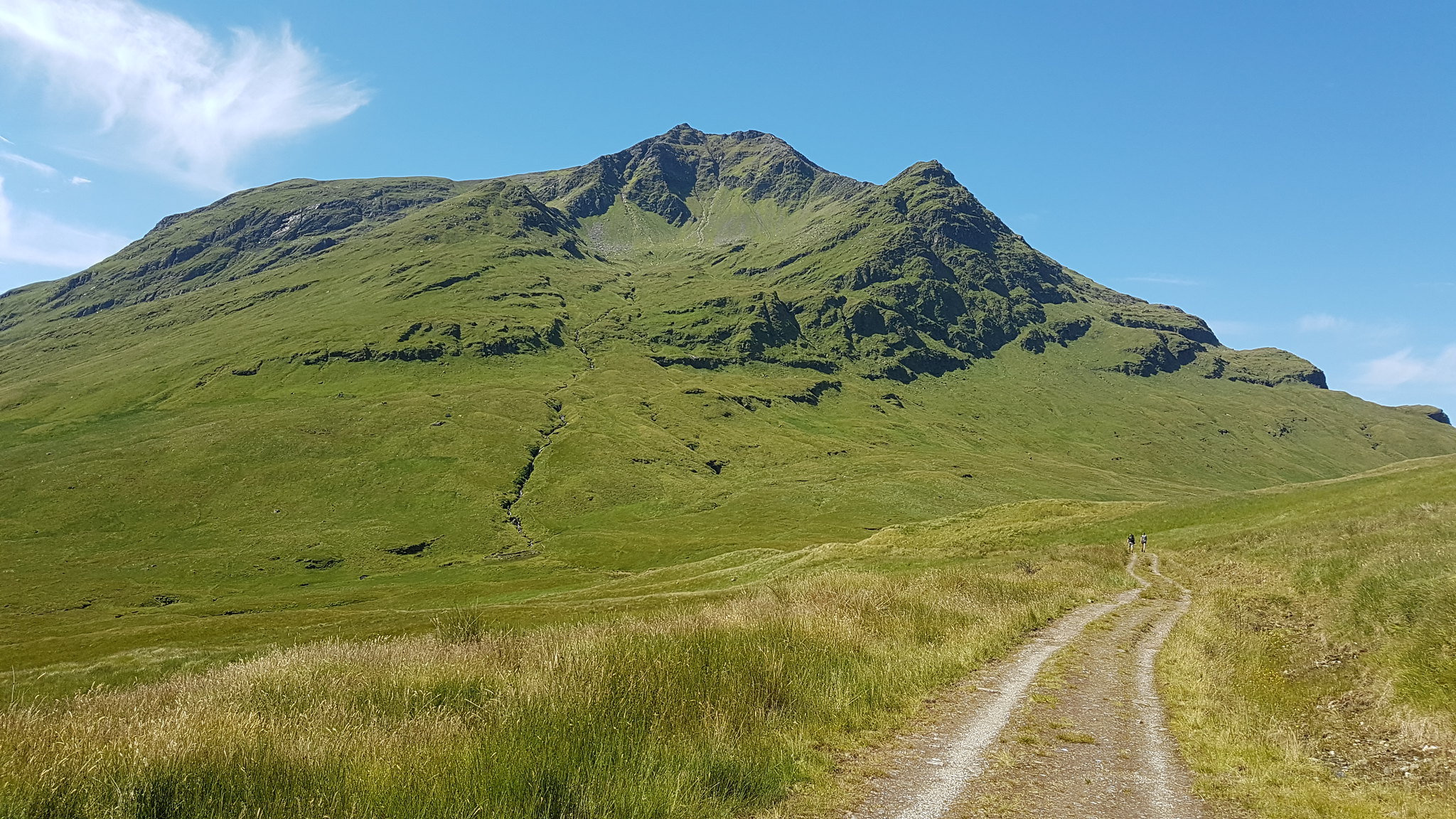 We stopped for few minutes at the end of the road and sat by the burn. I ate some Wine Gums, took on a little water and let go of some little too 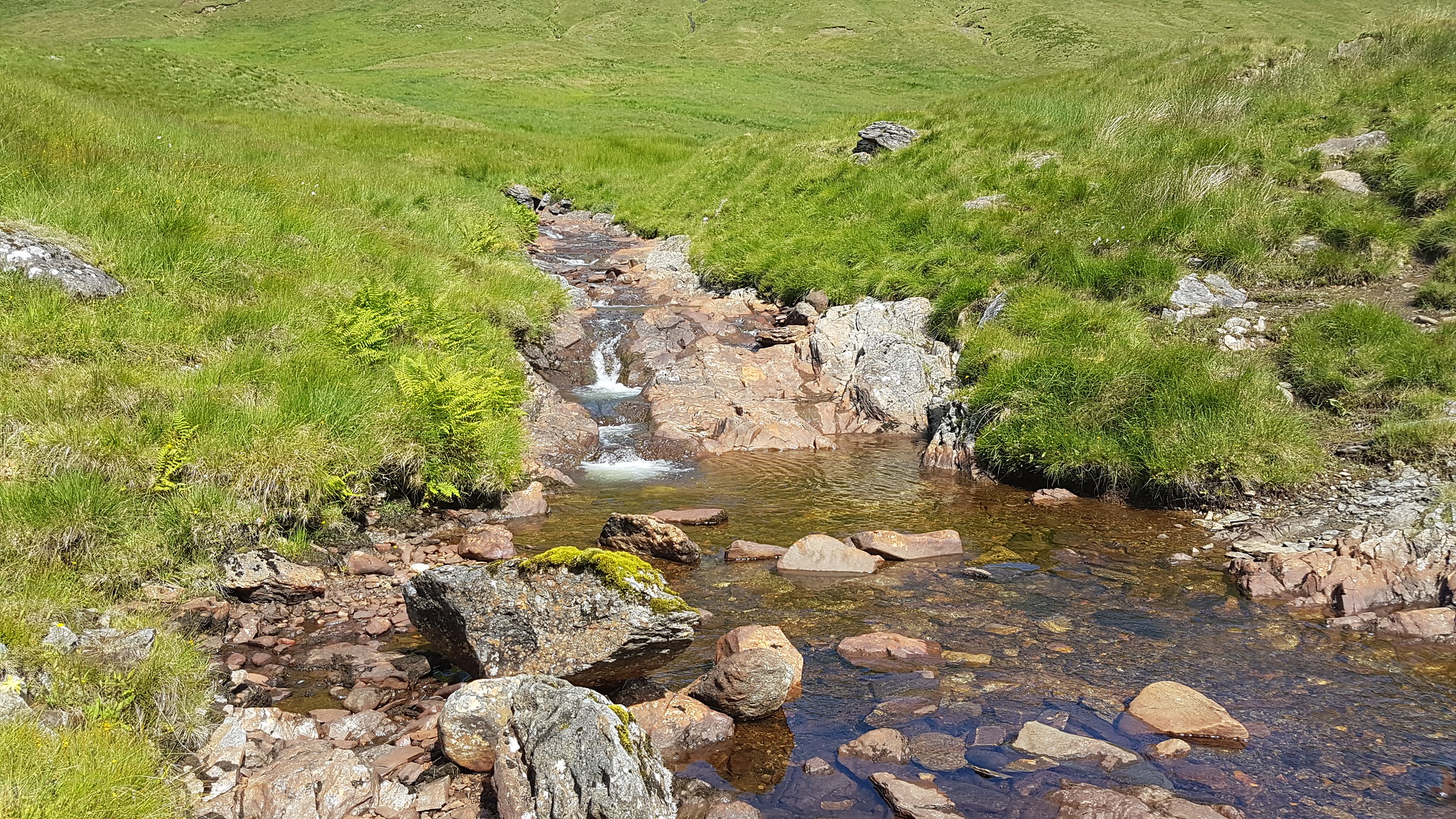 From the Rund we followed a relatively decent path that climbs up next to a wee fast moving burn that tumble noisily down the hill. There's also a few waterfalls to admire and plenty of fresh cold water to enjoy. 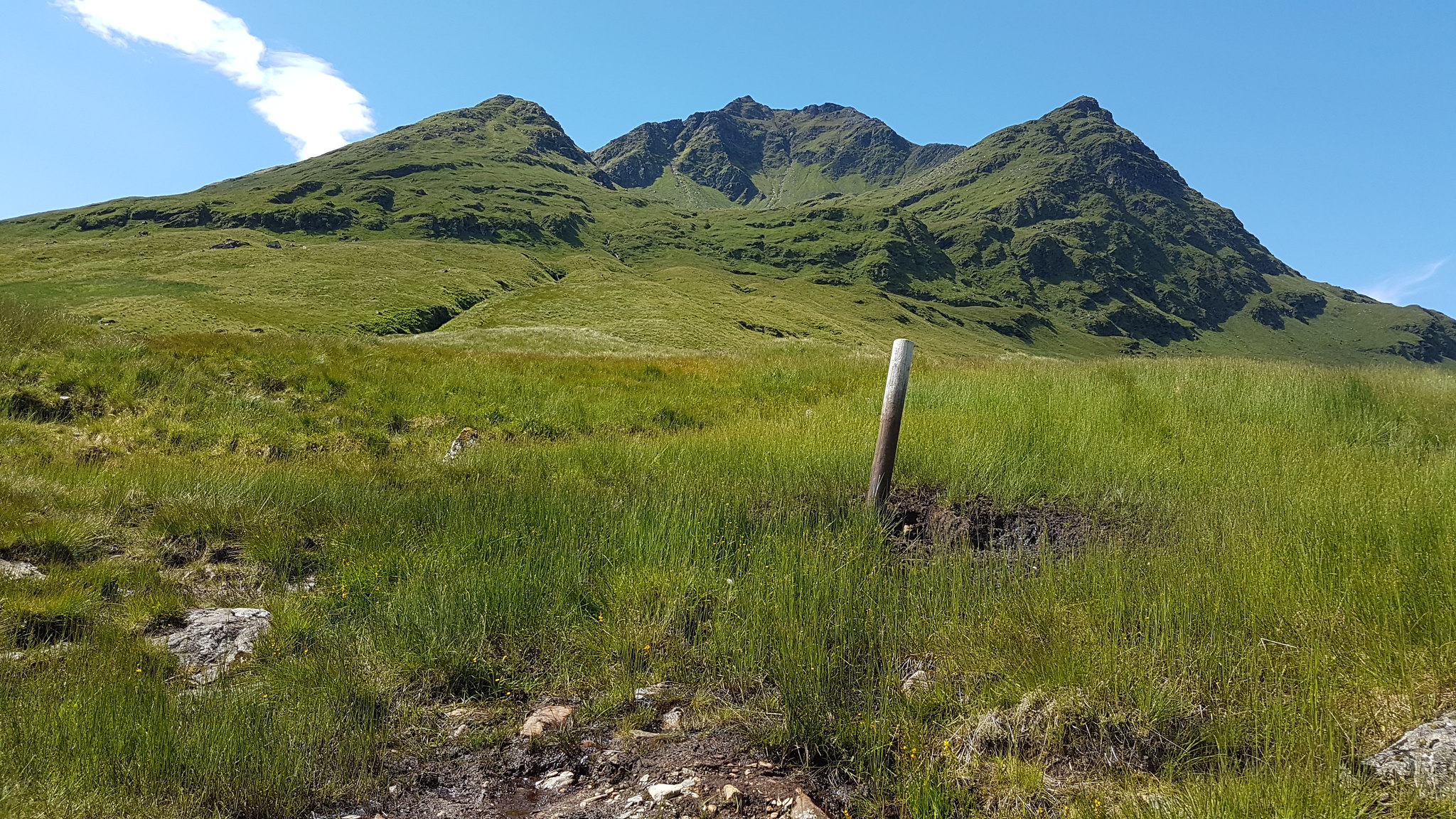 Time to start the walk... 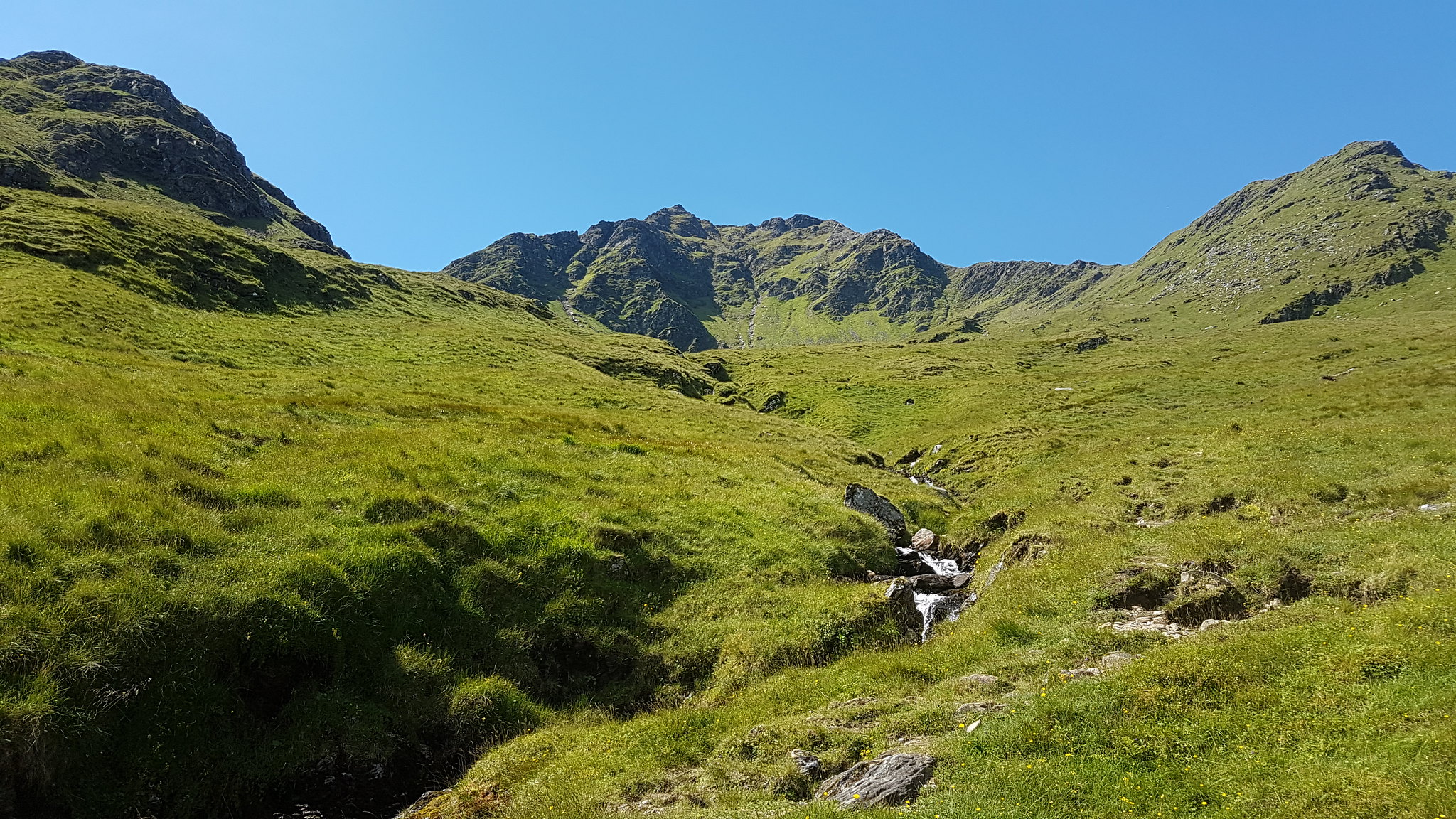 We reached the coire as nice as it was I felt a little underwhelmed, I'm not sure what I was hoping for but I thought it might be bigger maybe. Never-the-less it was a fabulous place to be so I decided I would have a little lunch here. 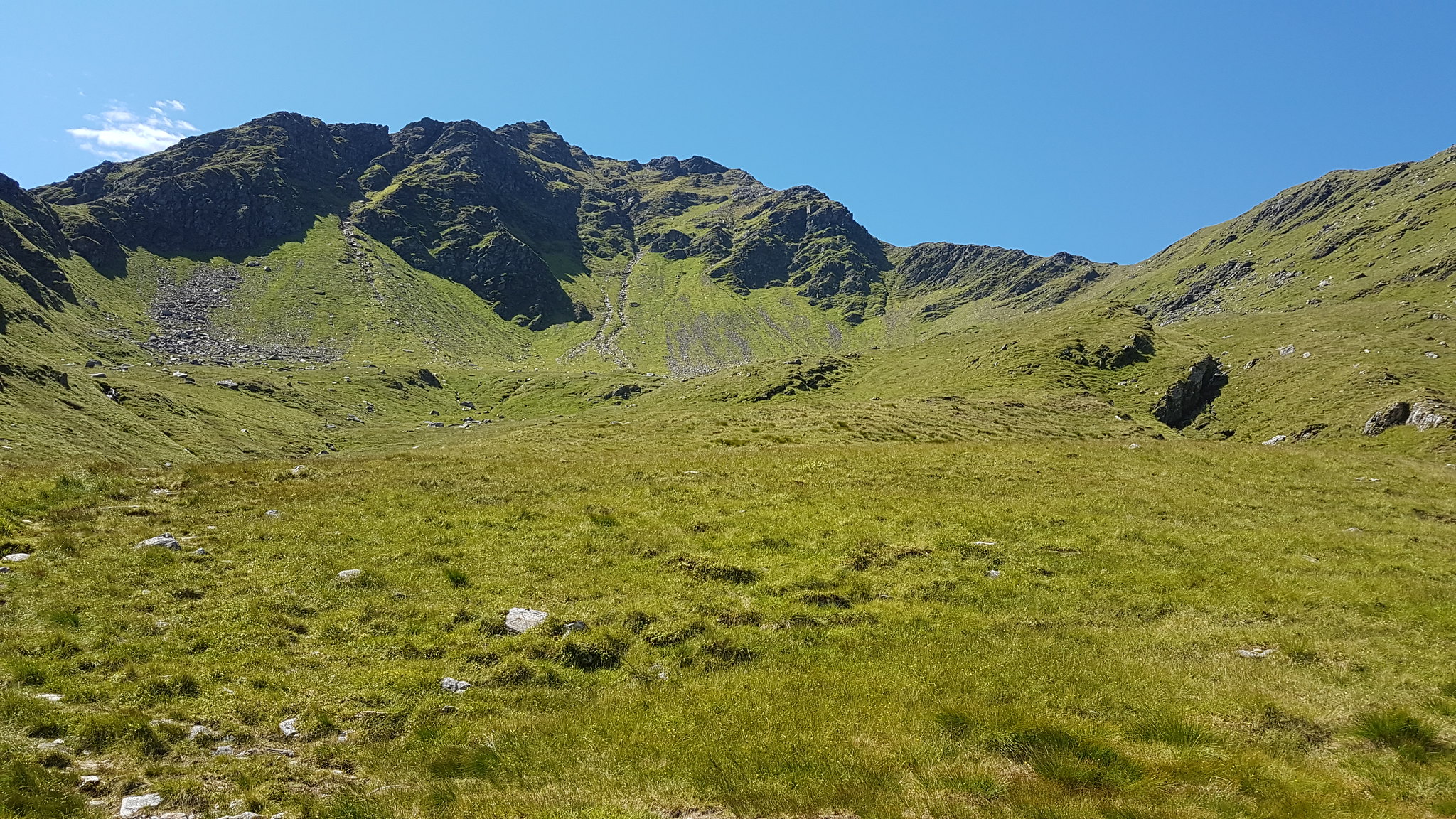 Once lunch was had (Chorizo and tomato pasta) we sat and had a couply cuddle for a while sitting in the sun.

We eventually got moving again, slowly. We worked our way up the West side of the coire following the path. It was no real problem but the temperature like before was a bit high for my liking...you see, I forgot the sun cream and elected to keep my fleece on for the entire walk 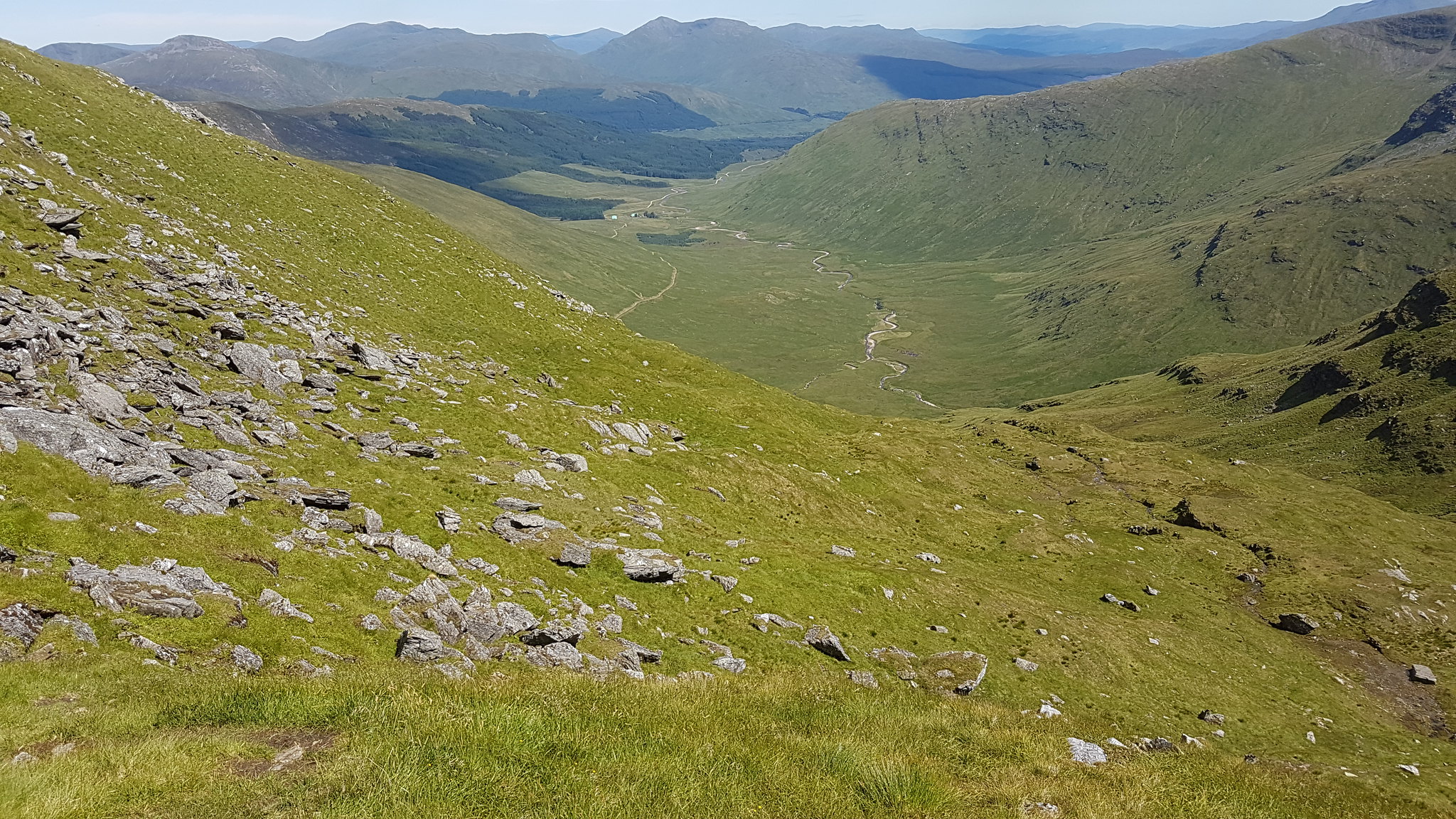 Views down the glen

We reached the ridge and I was greatly appreciative of an alternative to the grassy slope we were walking on. 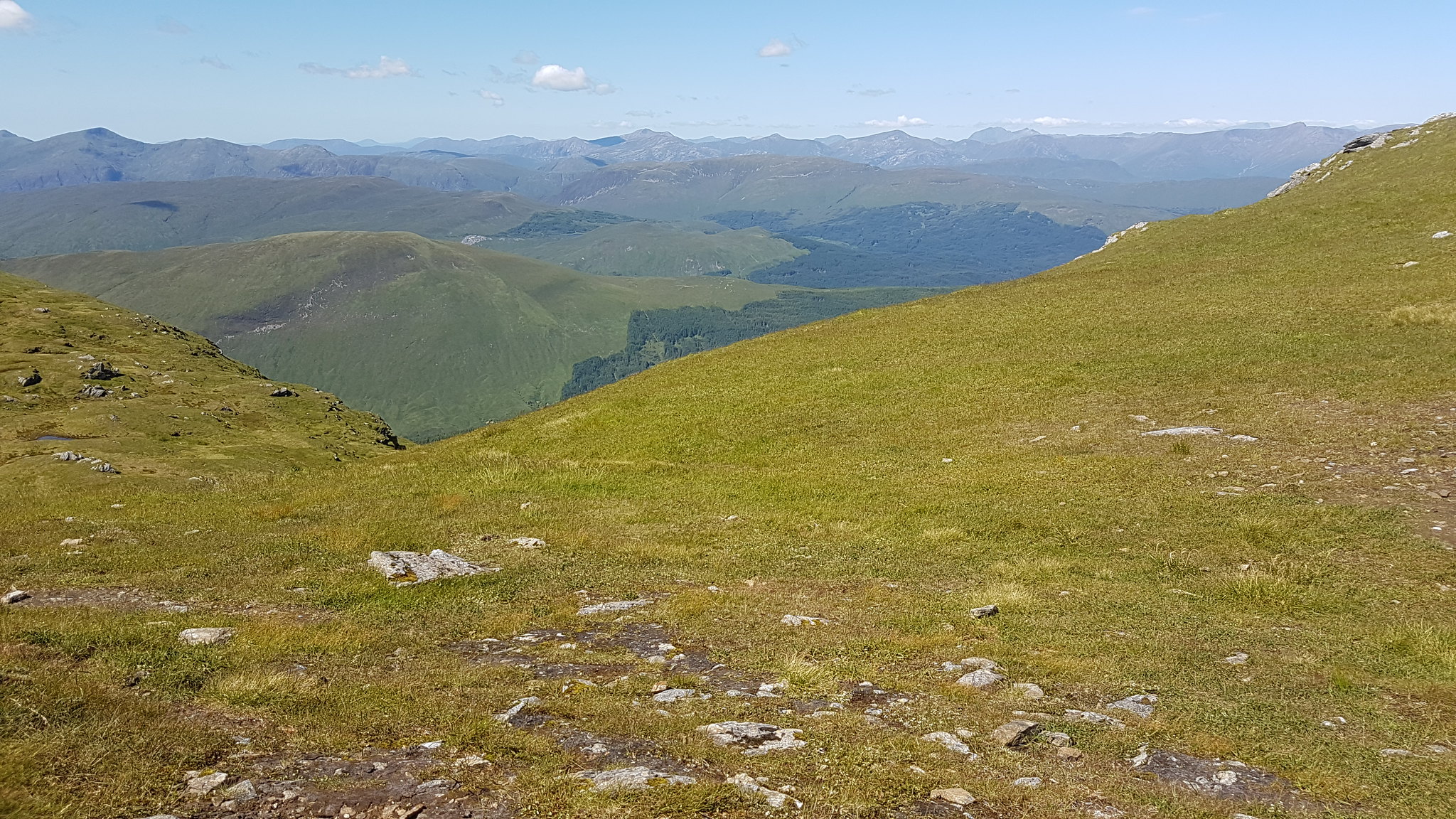 Views on reaching the ridge

The other half announced she was wanting her lunch now so we stopped again as she ate her meal. I wasn't that bothered we stopped again but I did wonder why she couldn't have had lunch with me

Perhaps it was a blessing she waited to eat because as we sat on the ridge a pair of eagles came into view and gracefully moved on the thermals in/above the coire. If we'd been walking our backs would have been turned and we may have missed them, they didn't linger long, a few turns and then they were gone, moving towards Ben More. Magnificent!

We weren't far from the summit in reality, just a final steep section to go with a couple of very minor scrambles to 'overcome' lol 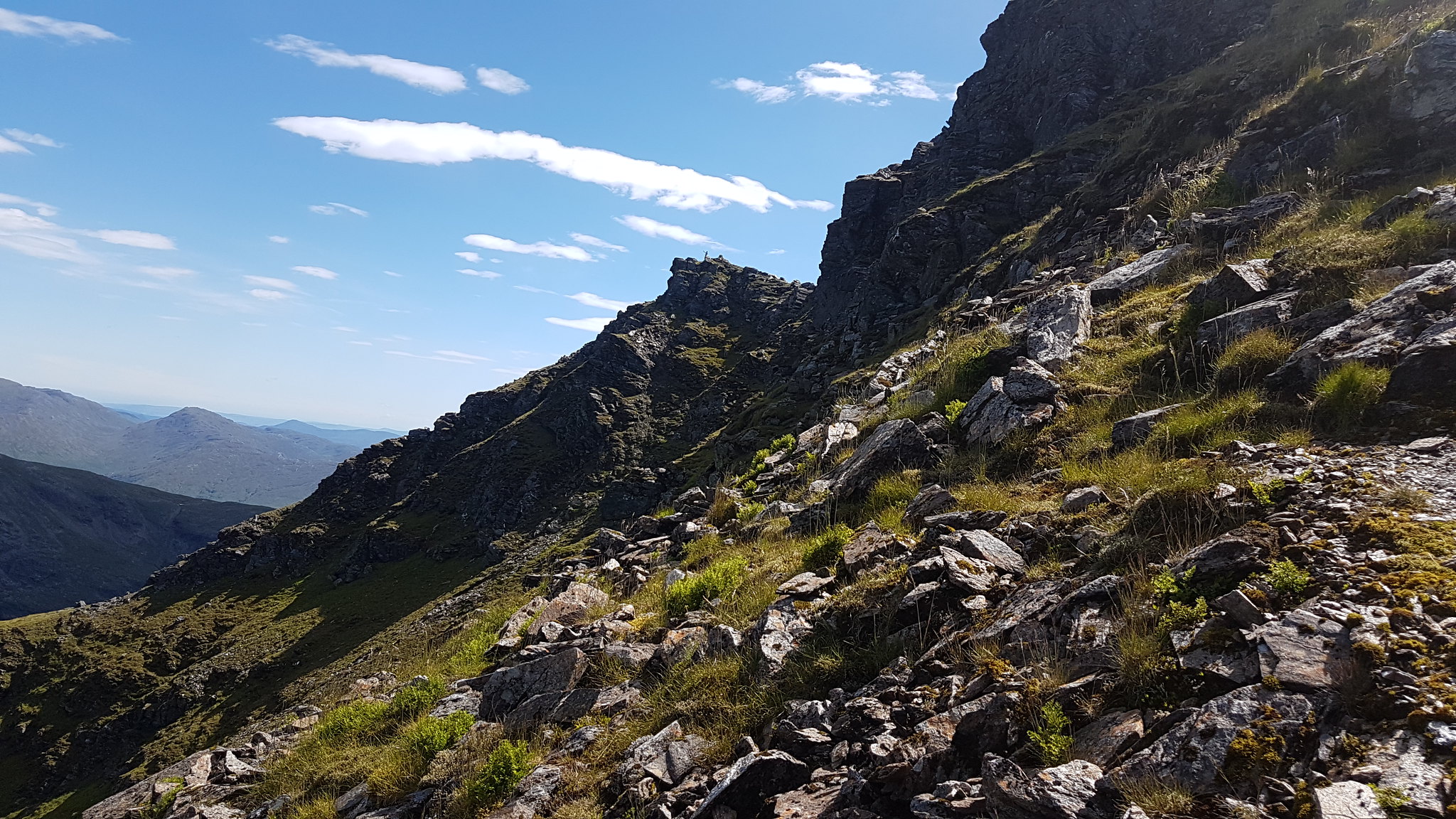 The summit up yonder

We poped onto the western top marked with it's own cairn. I took a couple of snaps before we moved over to the proper summit. 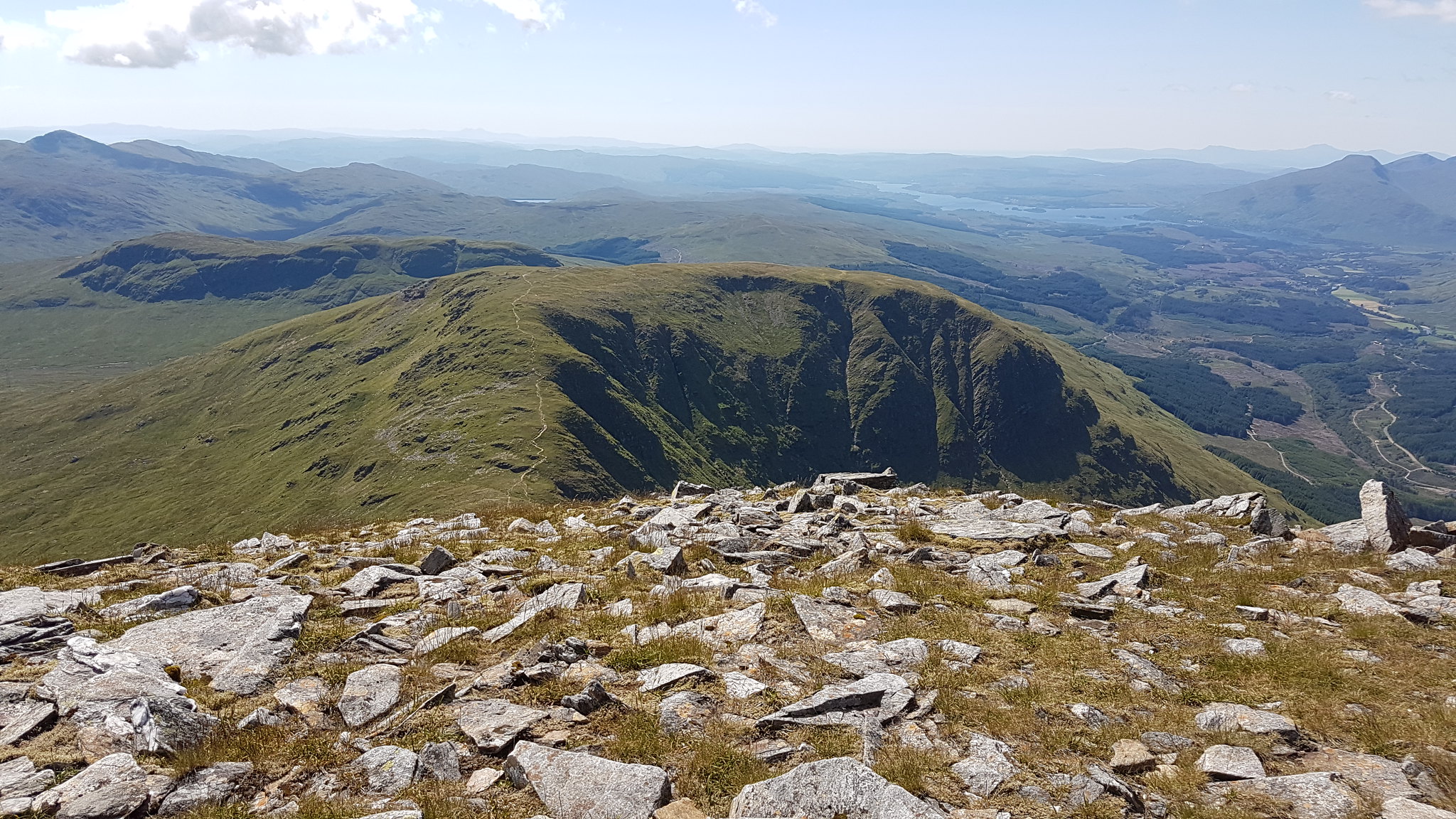 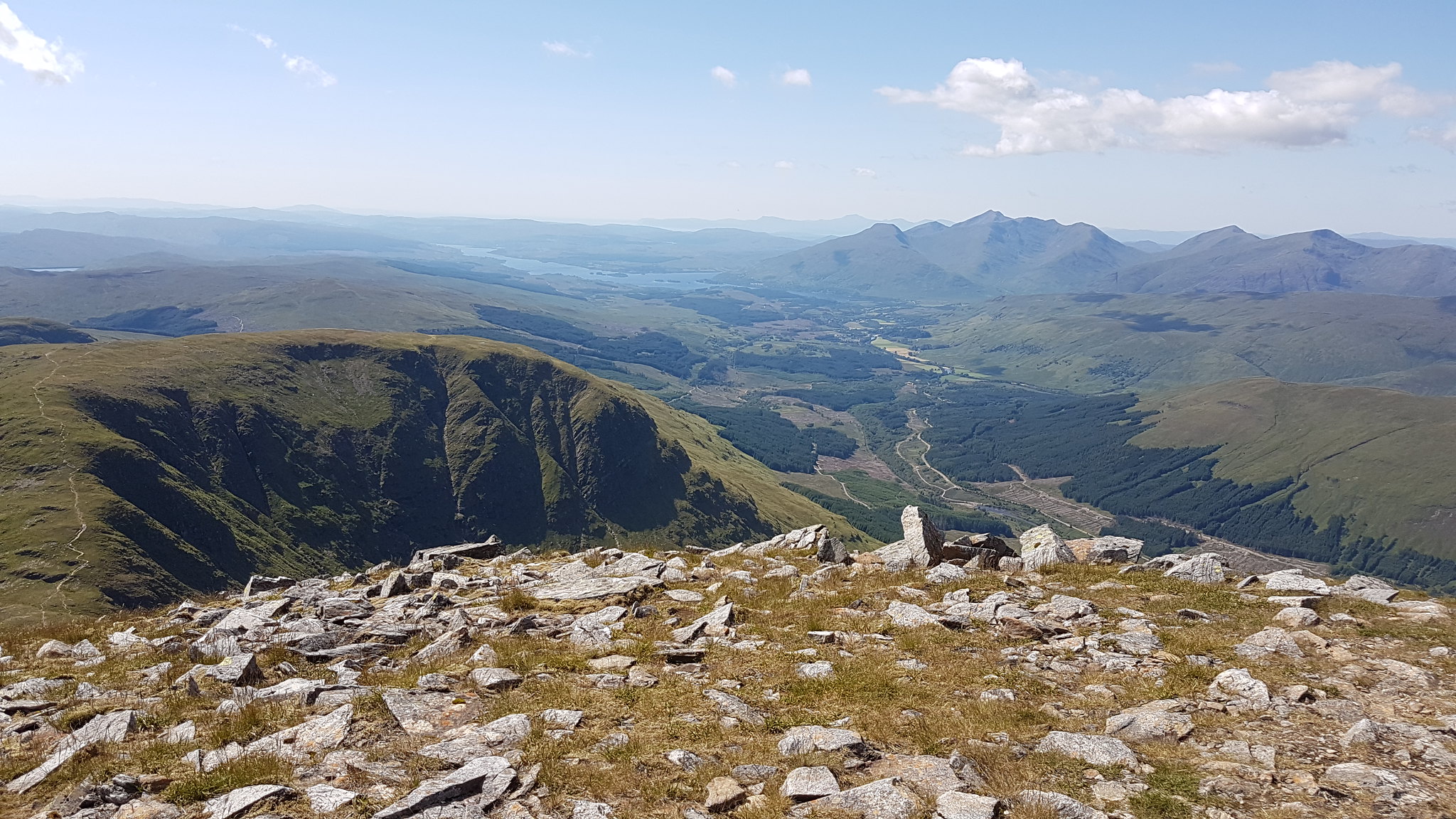 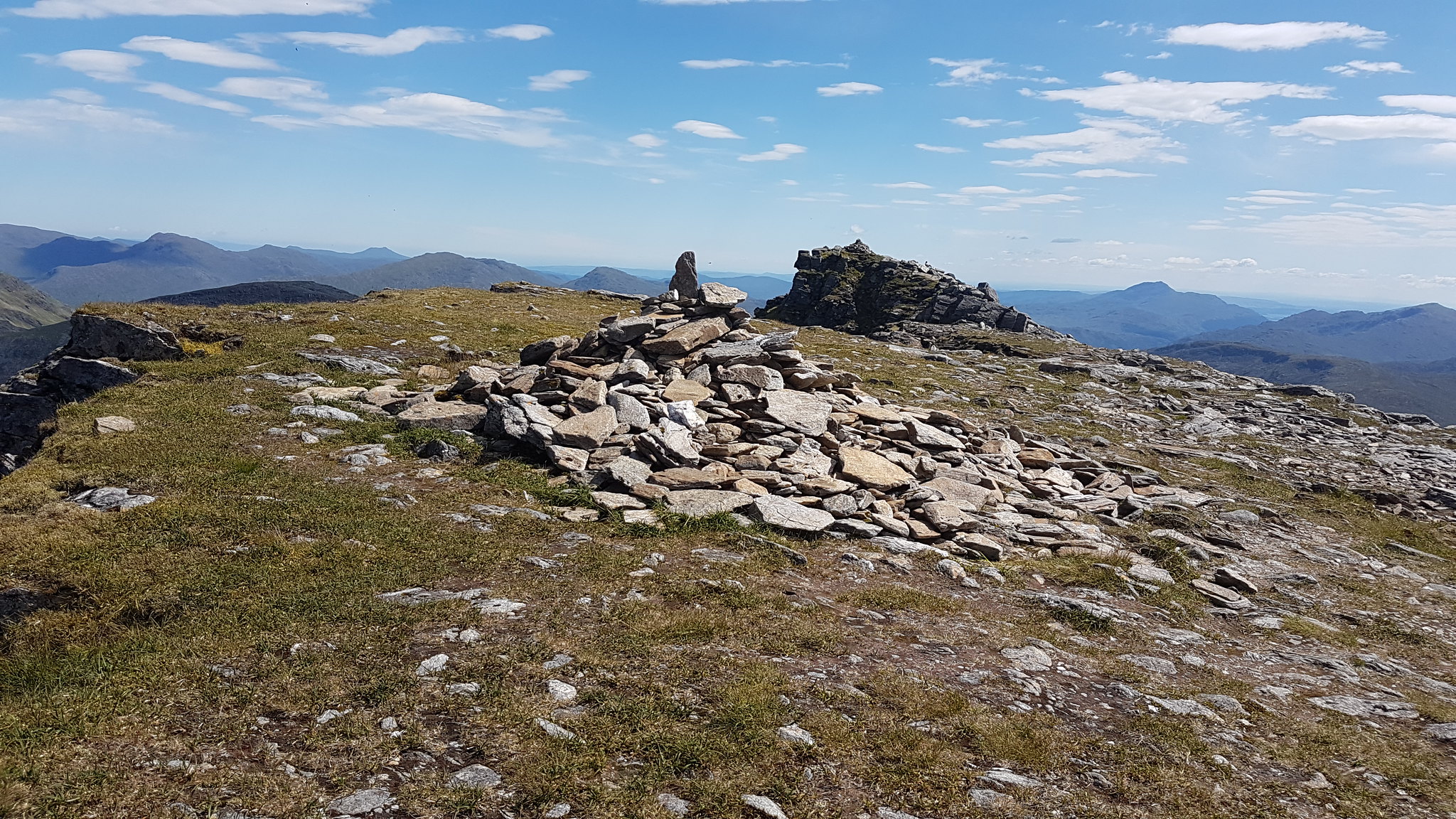 There were a few folk around as you might imagine but all seemed to have come up from Glen Lochy. 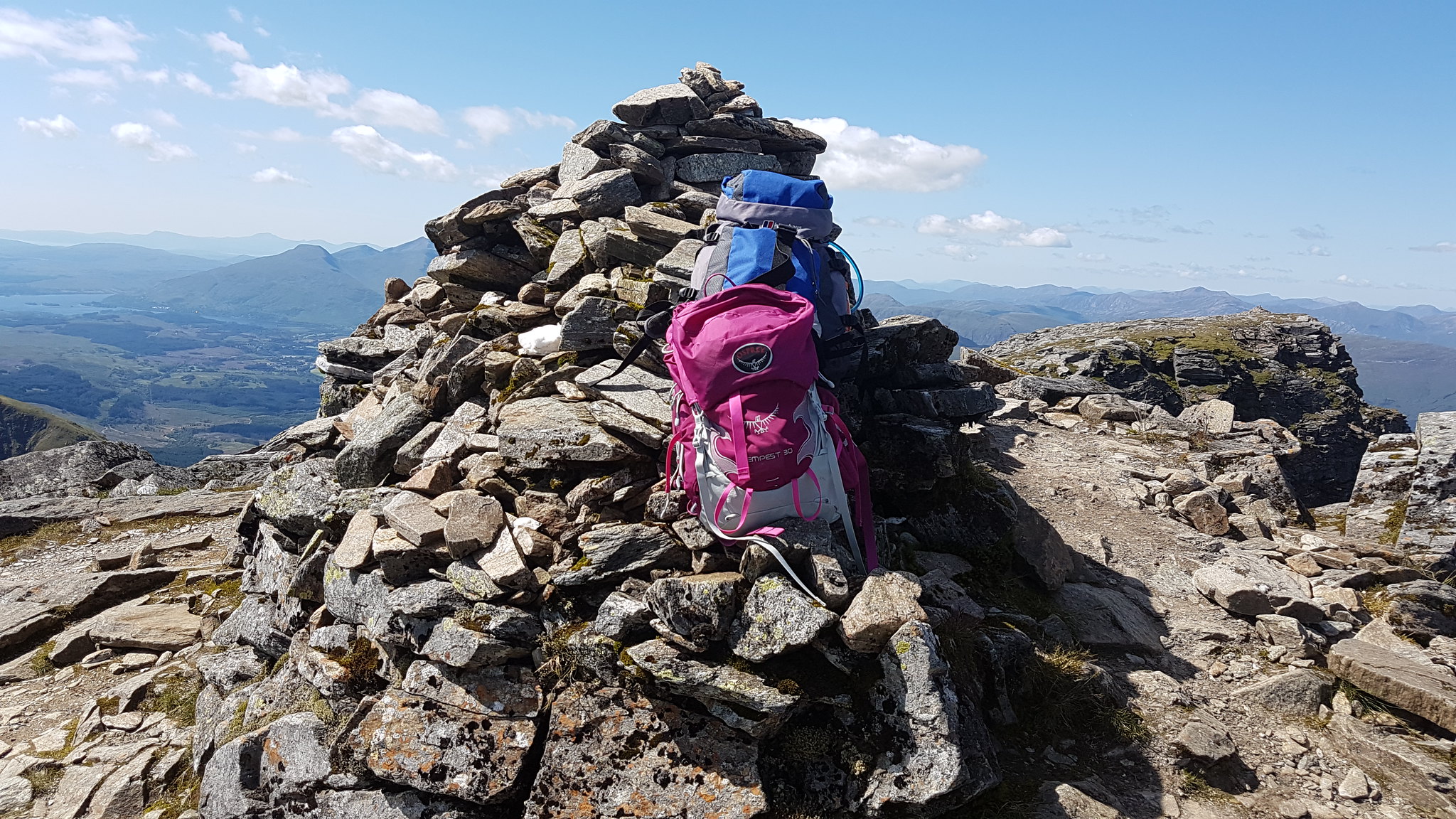 Summit selfies? Not us. 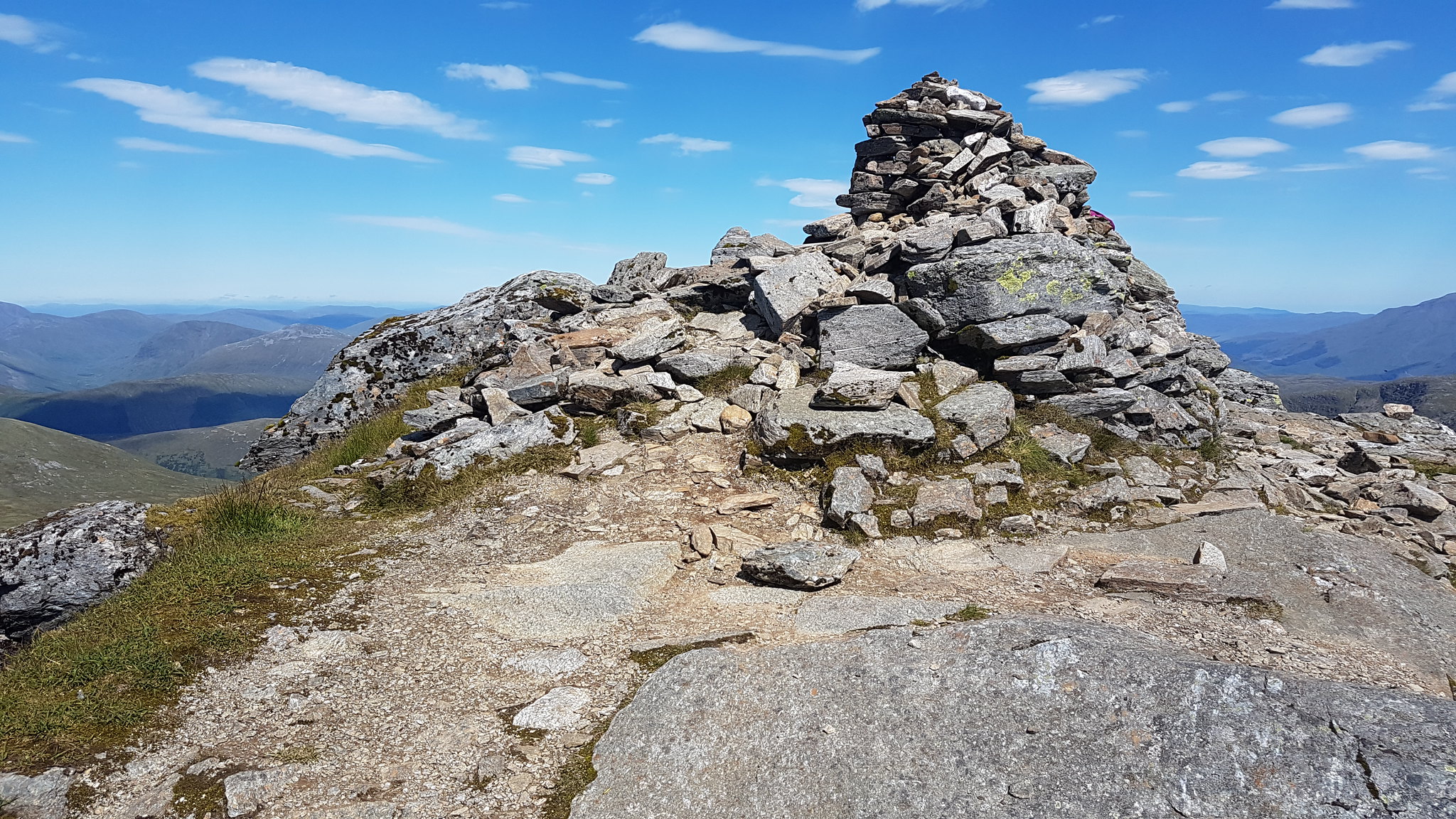 We sat again for a while on the grass enjoying the sun but thanks to the light breeze it wasn't as warm as it had been.
I had a few more Wine Gums as we lazed about for a while, others were sitting with their shoes off. This reminded me of my walk up Ben Lomond way back.

The legs were starting to stiffen so I was keen to get moving again, I wouldn't normally stop as often as this but hey, we had all day.

The walk down to the bealach between the 2 hills seemed to take forever but that was probably just my imagination. 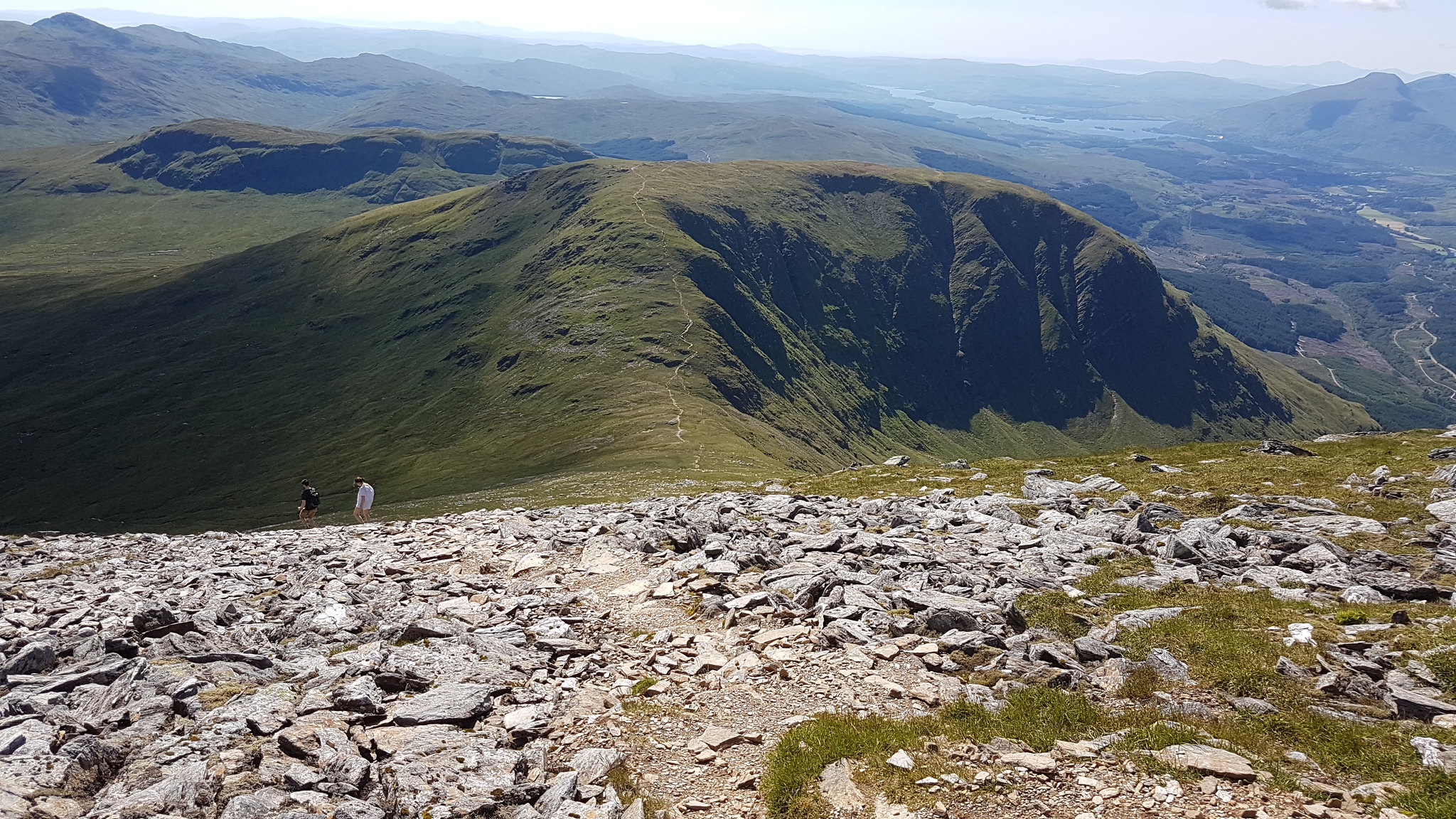 When we arrived at the bealach my girlfriend said that the climb up to Beinn a'chleibh looked a lot flatter (from Ben Lui) and it looked steep now, I was thinking it looked easy 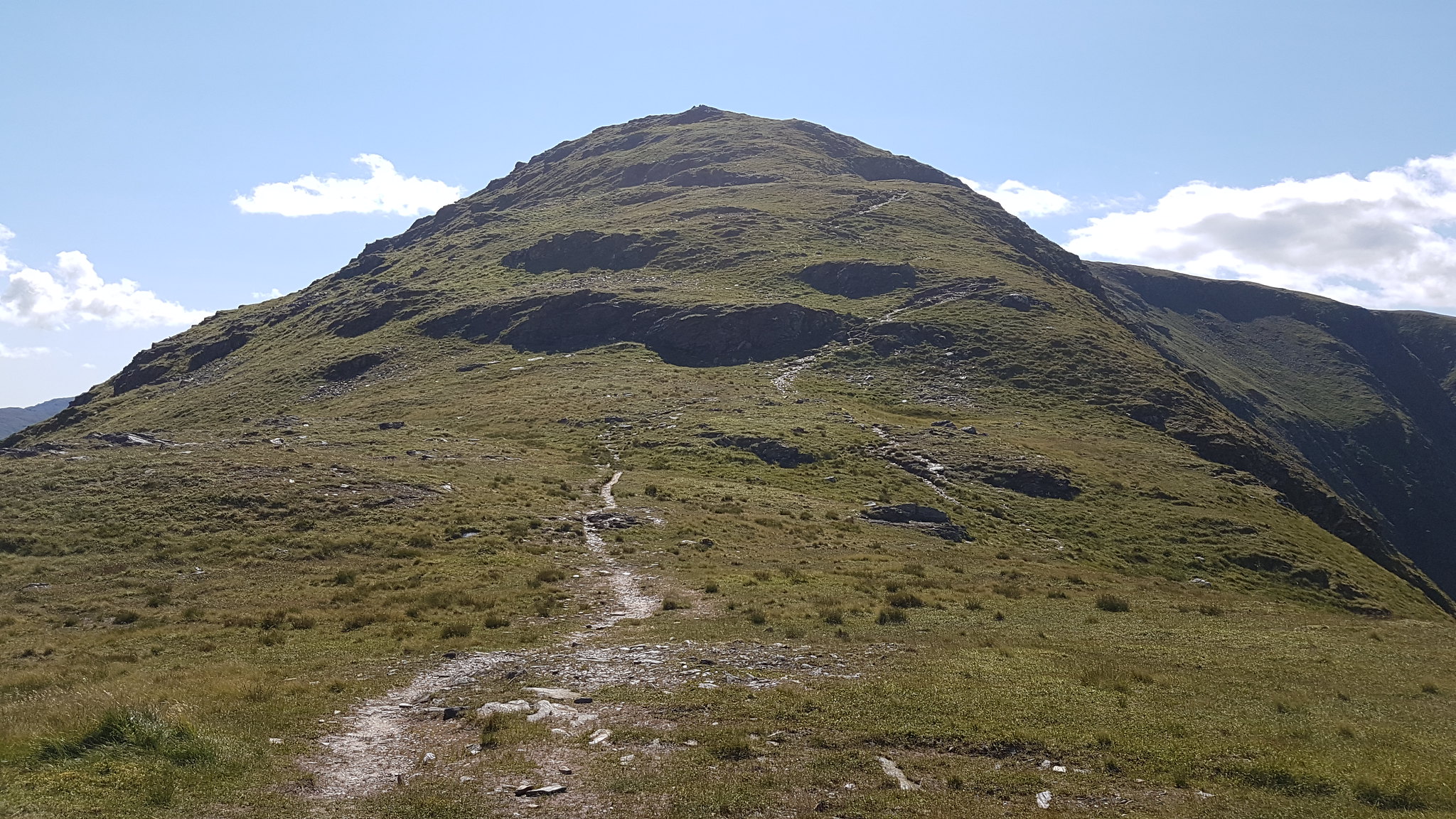 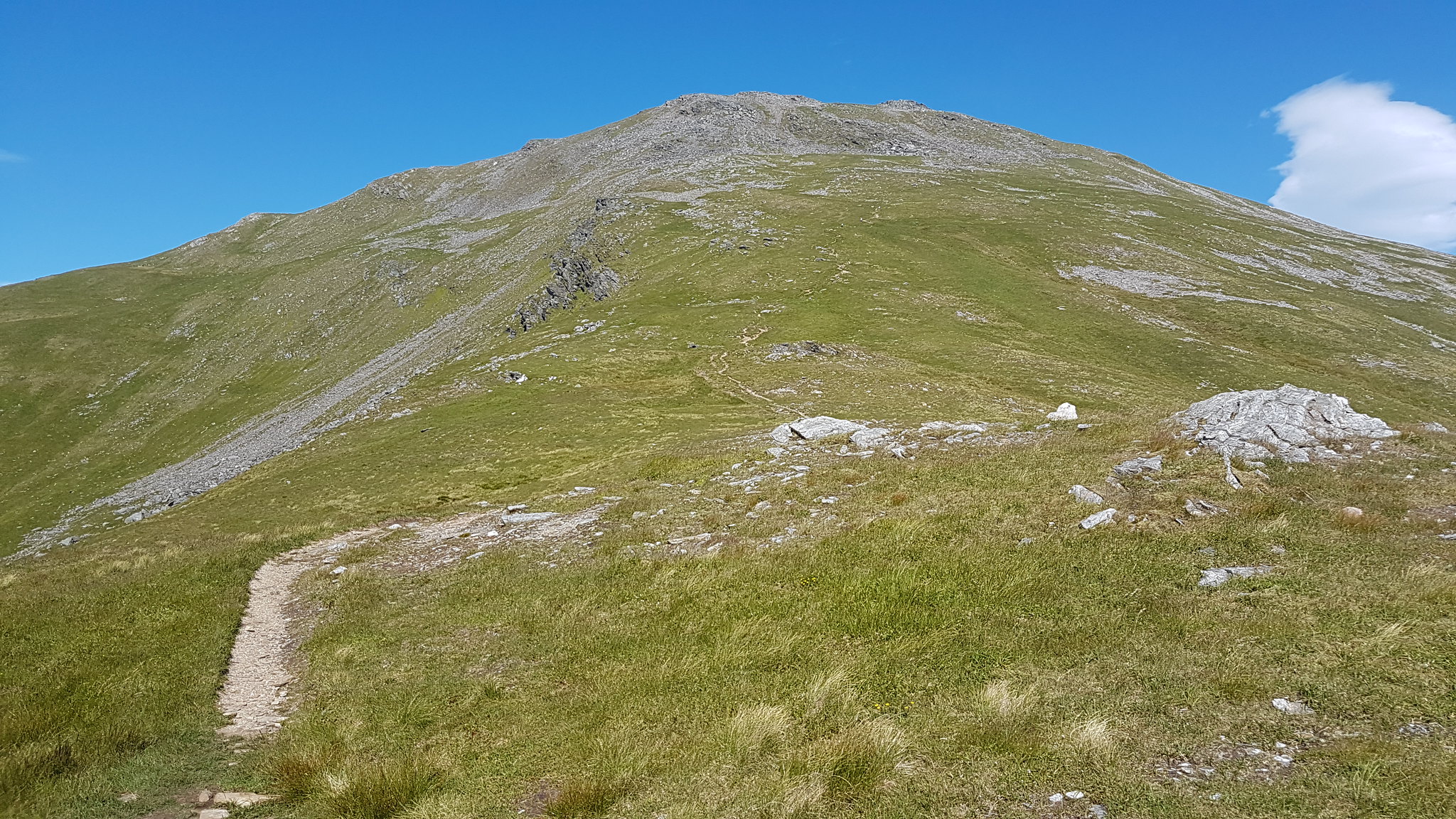 Looking back up to Lui

So it proved, the climb up to the summit was short and quick. (No jokes about sex lives please). 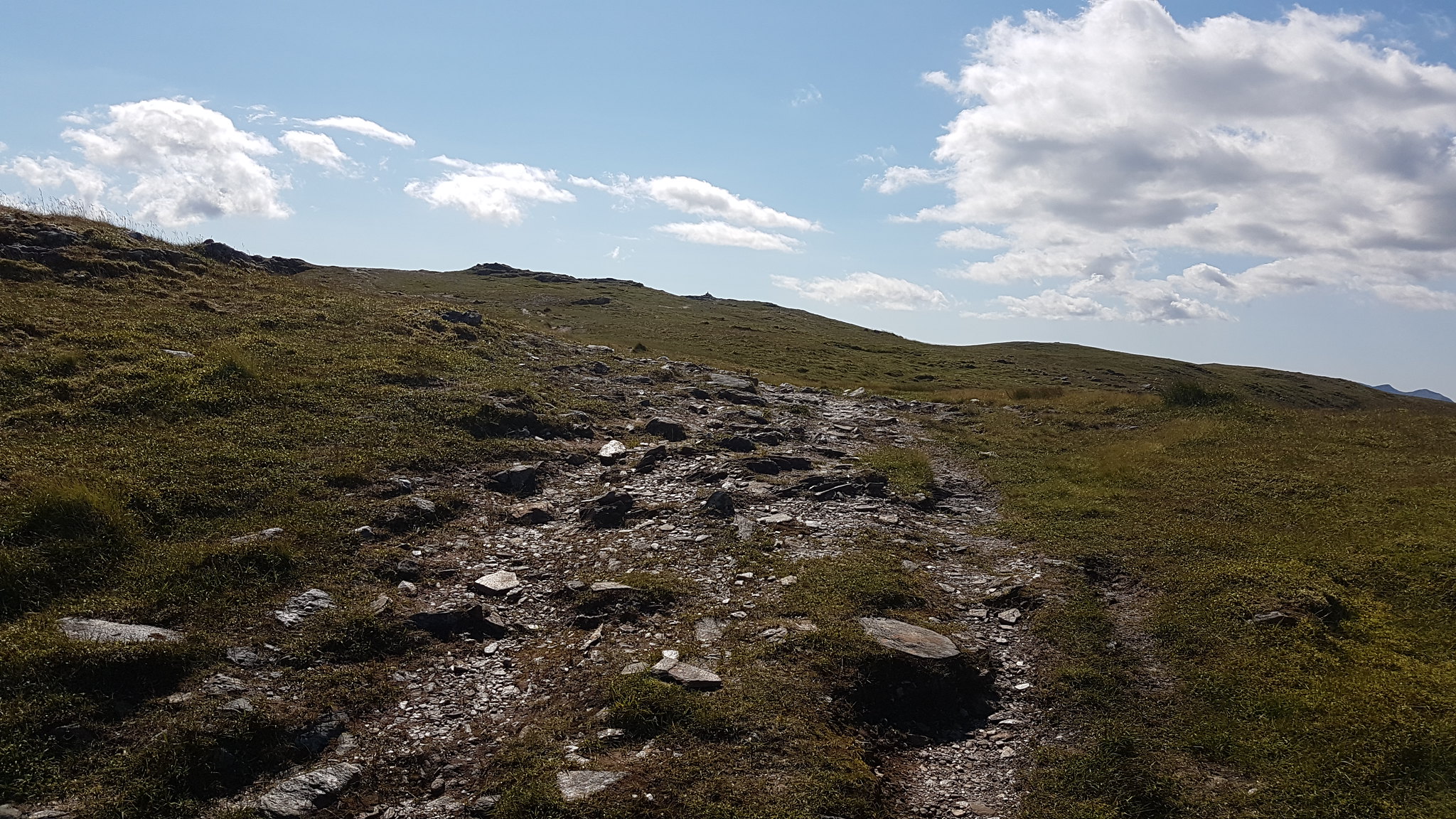 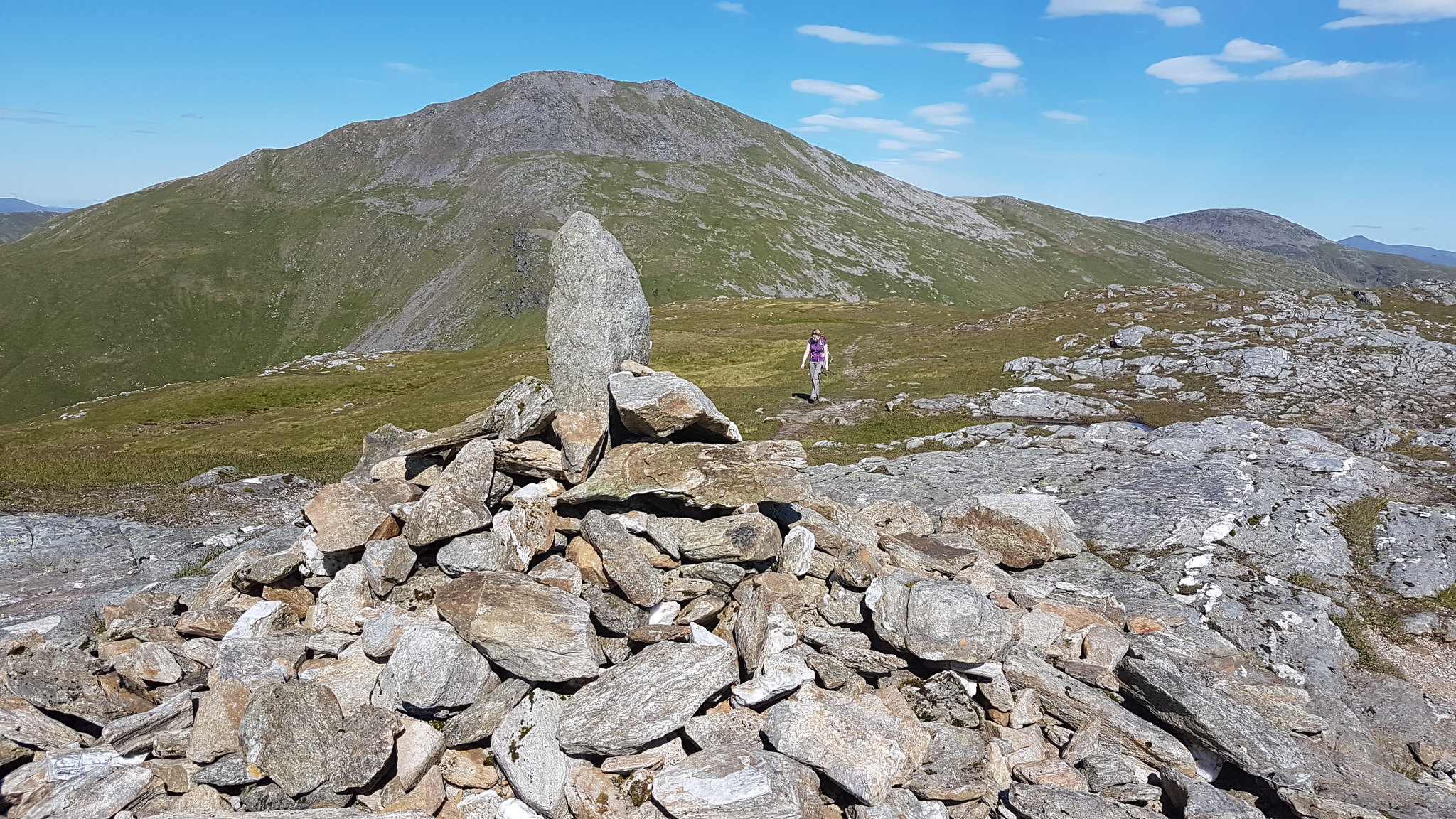 Again we stopped for a while so I decided to have a little roll. Pastrami, ham and cheese yum.

I could see that my GF was suffering, I asked her what's wrong and I got the standard female response to that question "nothing, I'm fine". It didn't take much to whittle the truth out, her feet were sore

As sorry for her as I was there's not a whole lot I could do to help, we were miles away from the car and we'd have to walk it, there's no other option.

I told her to rest a bit, eat something, take a drink while I snapped a few shots from the summit. I took a shot of her that I'm not allowed to post looking pretty fed up at the cairn 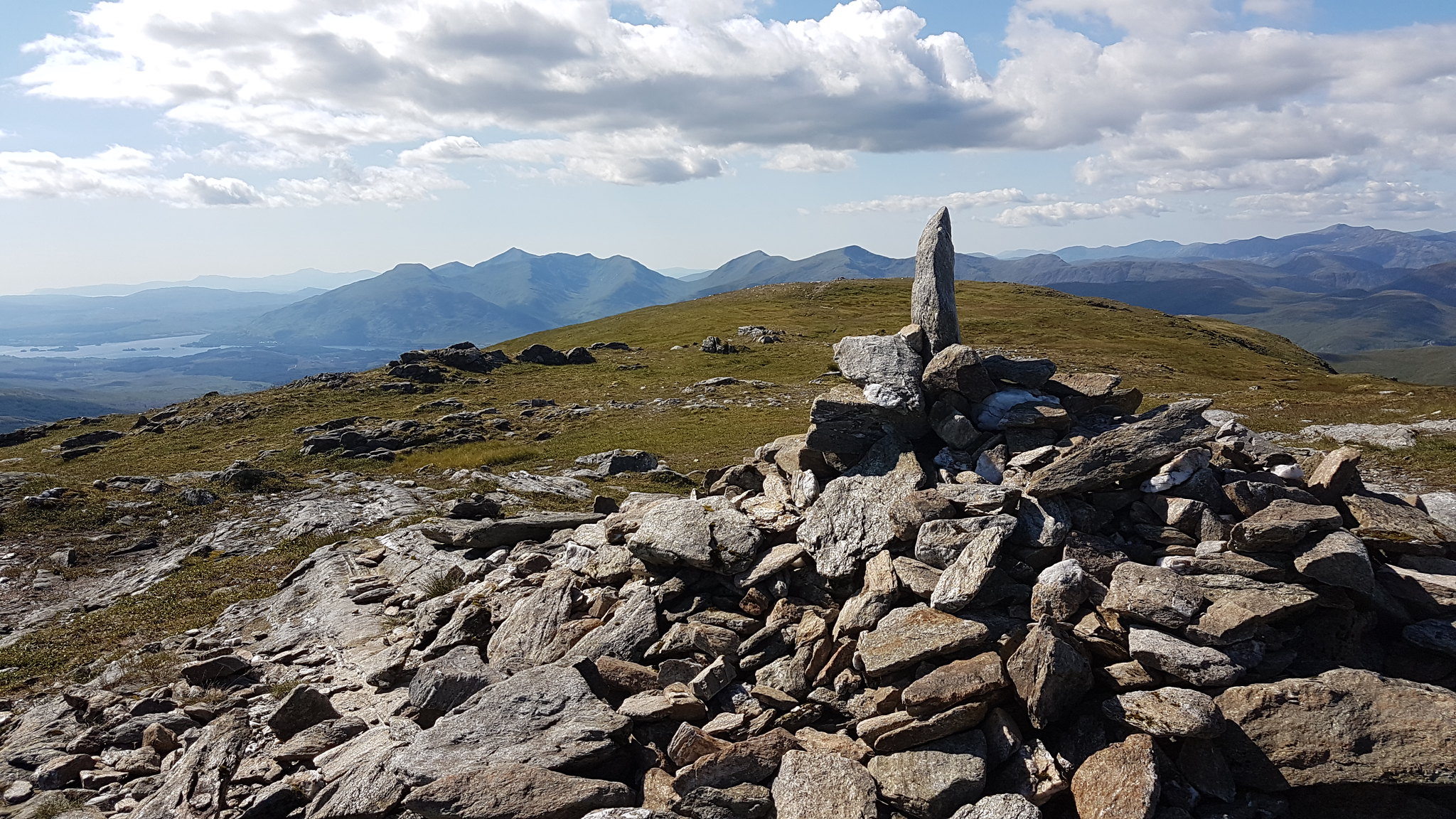 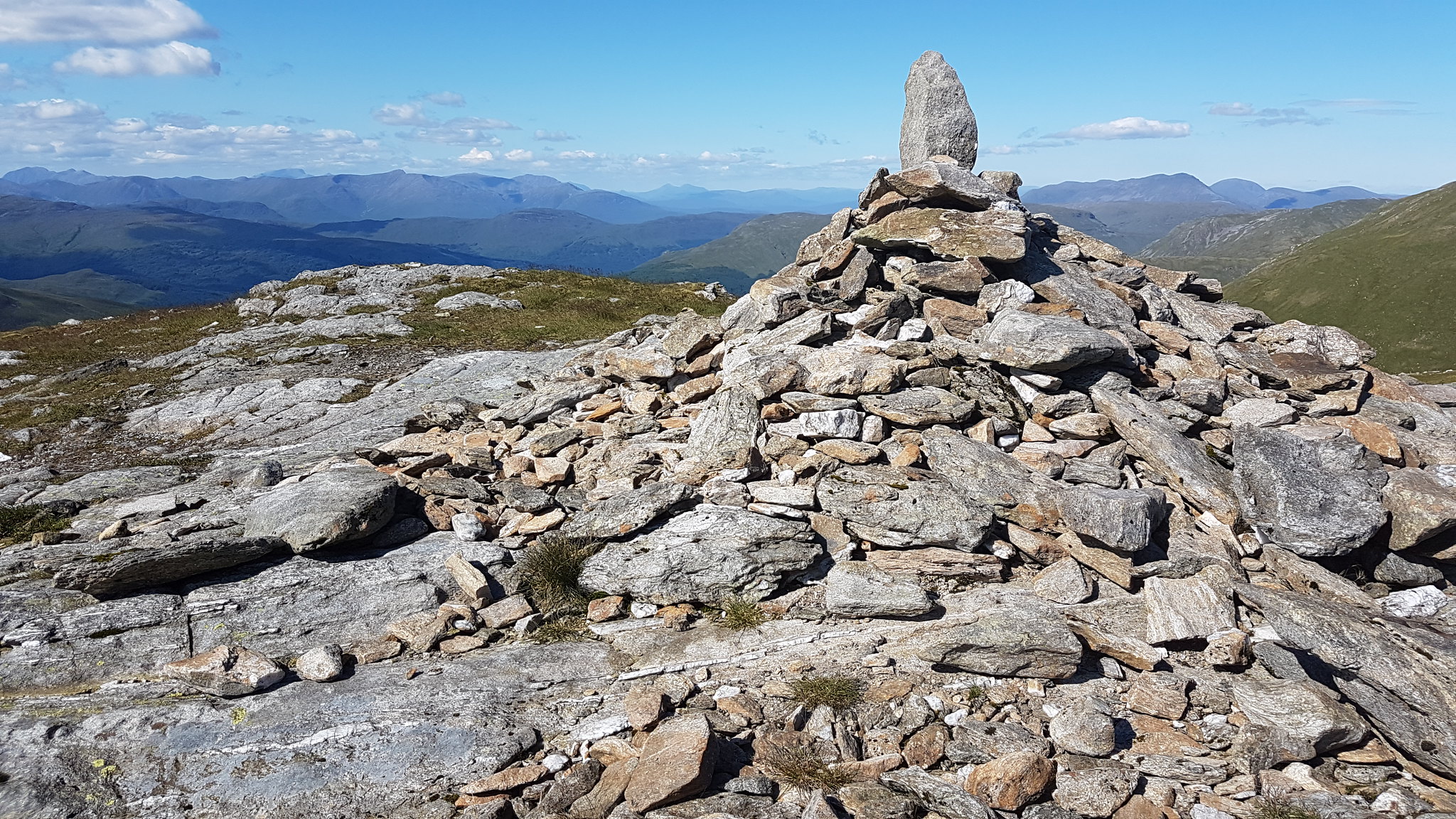 We were going to have to retrace our steps back up Ben Lui and this was gonna be tough for the missus not only because her feet were sore but I think she was feeling tired. 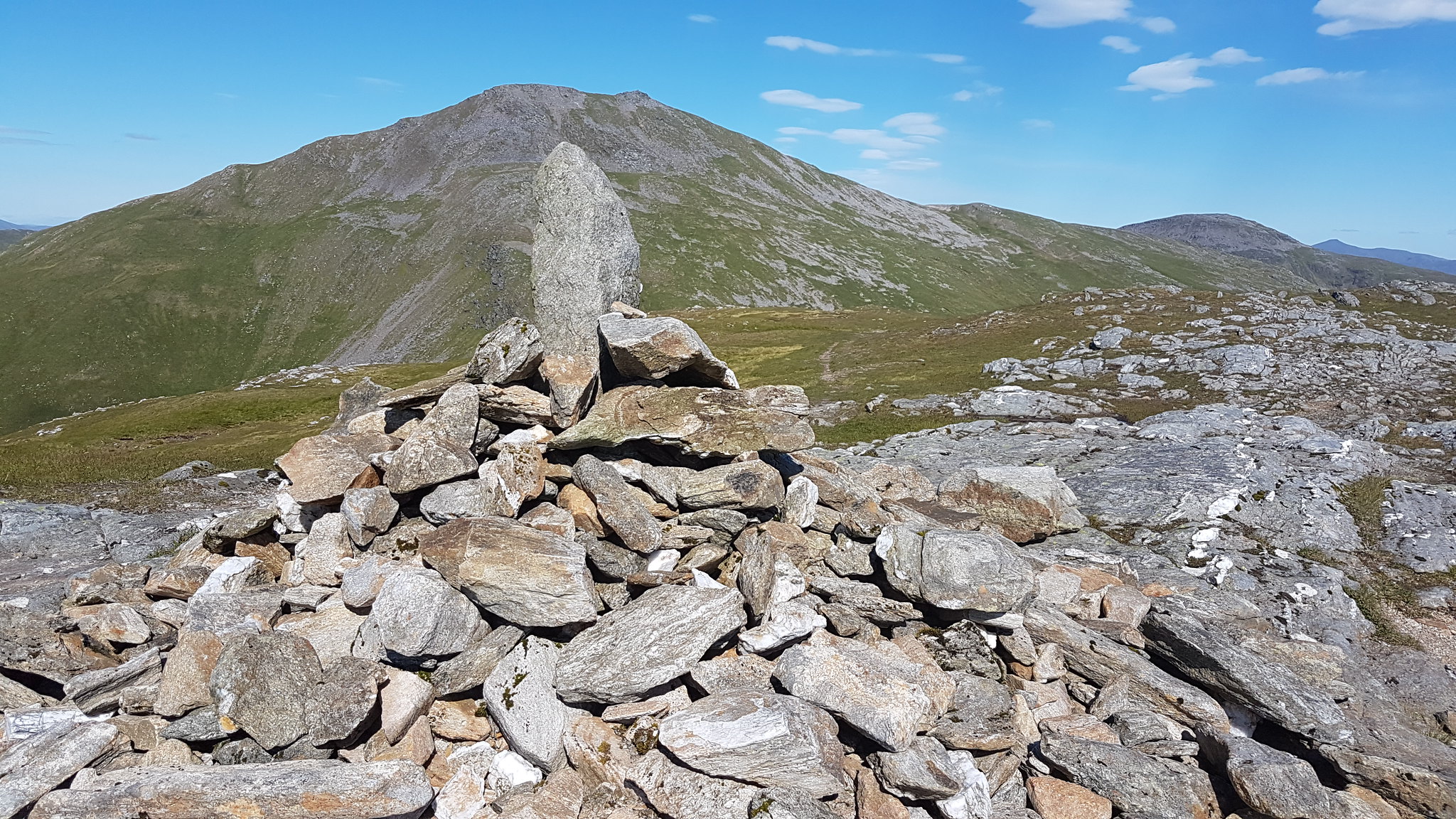 Looking back to Ben Lui

Oddly, I was feeling pretty good at this point. I generally hang out my arse when hill walking but there's always a point late on when I feel amazing. I was blasting up the steep path back up Ben Lui like a total boss but finding myself well ahead of the GF I was stopping to allow her to catch up then having to wait until she had a wee rest...there's nothing worse than stronger walker galloping off ahead of you then stopping until you catch up then immediately setting off again so I didn't want to be 'that guy'.

At a reasonable height we branched off the path traversing eastwards with a shallow incline, the plan was to aim to reach the ridge at the exact point where we'd be descending back down the front of the hill.
The ground was pathless and rough but the thinking was it would be better for her because well, she said so. After a good bit of cross country walking we ended up exactly where we wanted without having to to make any big adjustments to our route which was nice. 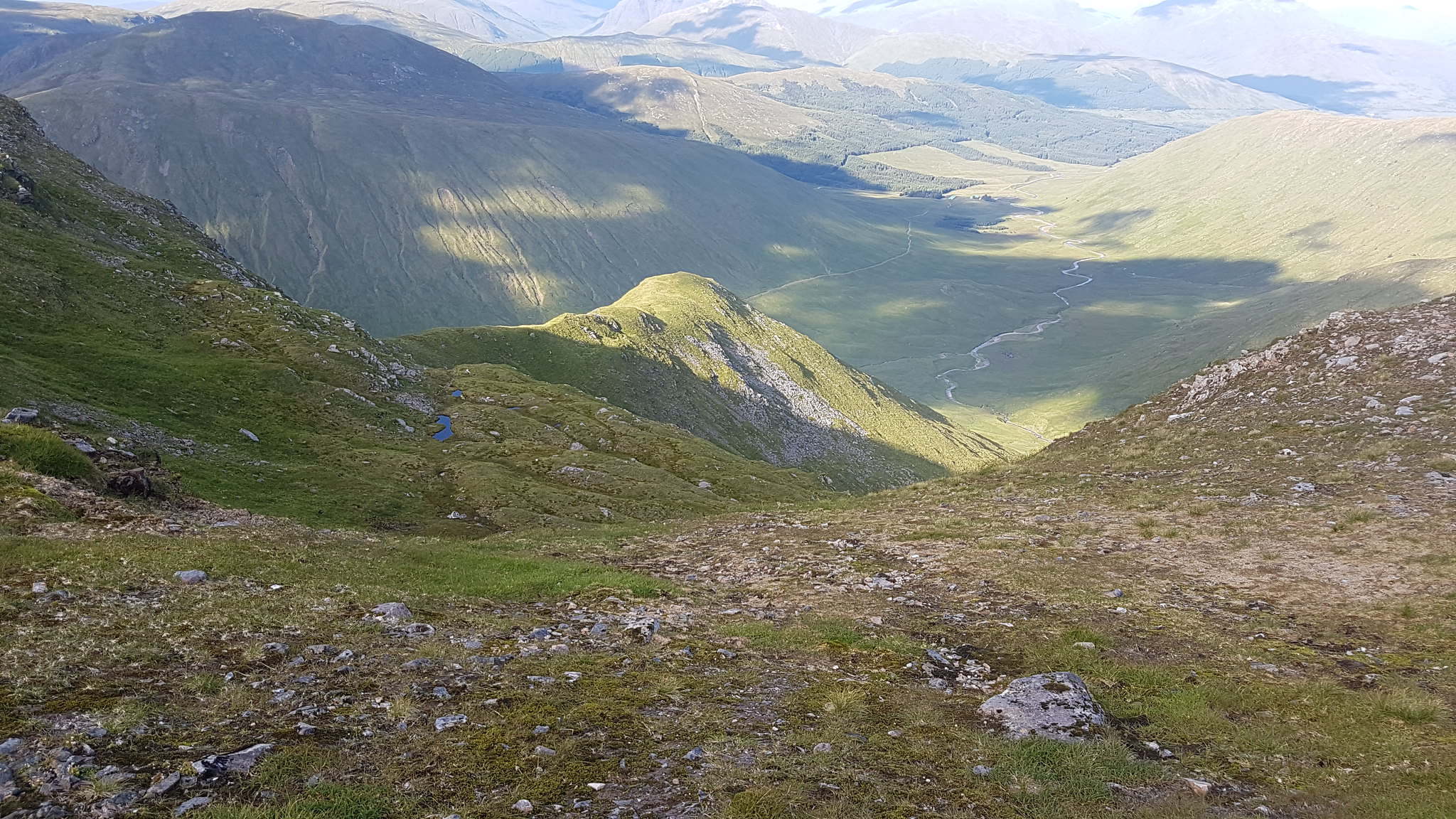 A long way to go

A steep section took us down to the wreckage off plane that had obviously crashed here, I knew nothing about it and was surprised to see it. I done some digging later on about it. Apparently this hill was a plane magnet as there's been a few over the years. 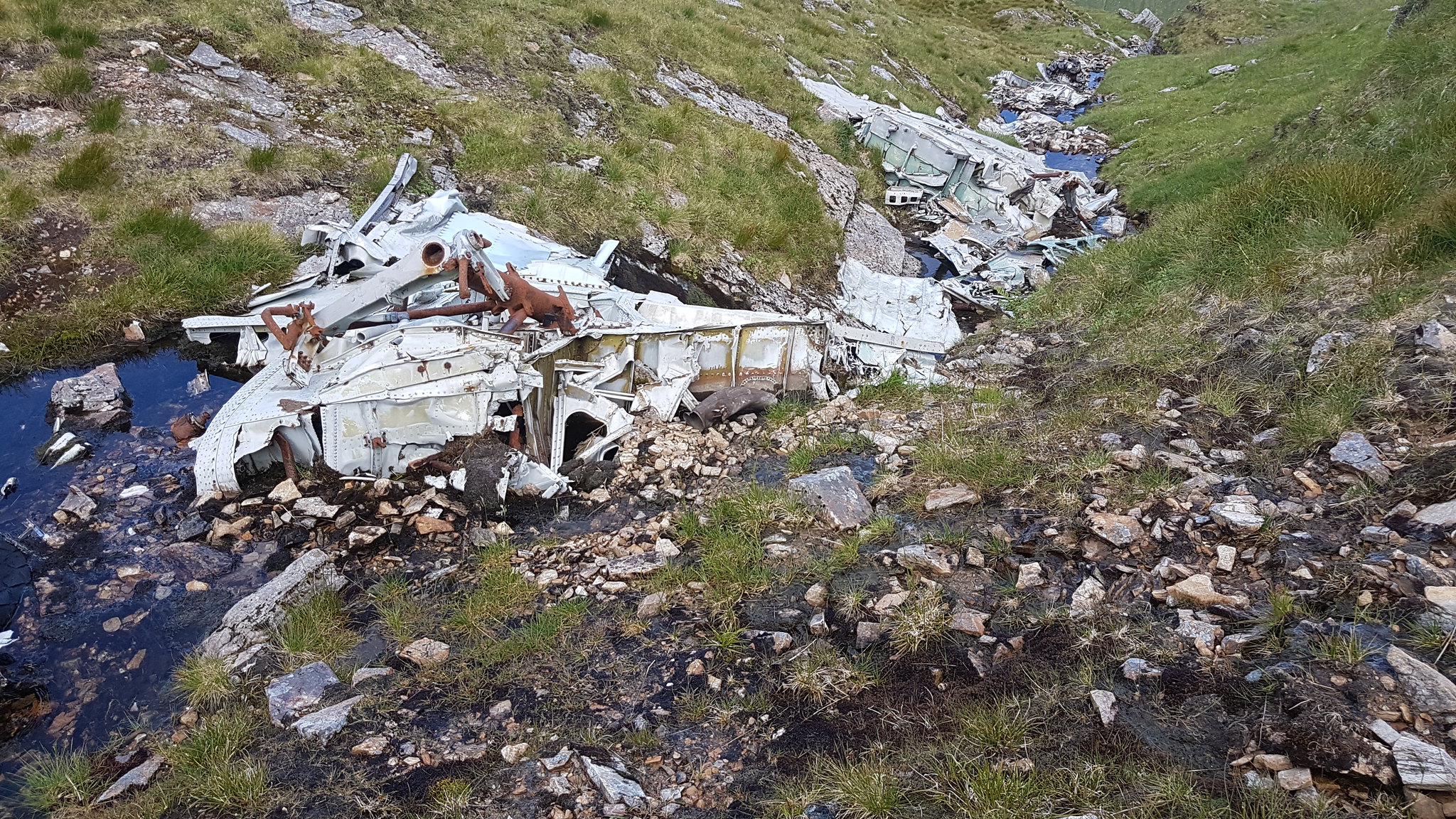 Progress off Ben Lui was slow, the path back into the coire was pretty poor, steep and slippery in parts. I'd slso ran out off water at this point...that's 3.5ltrs of liquid I'd drunk thus far, thankfully we were in the shade of the hill now and close to a water source.
Once back on the main path we managed to pick up the pace a little, I stopped on the way down at a wee waterfall to fill up my belly with water, I drank so much I actually felt like I might be sick

We reached the end off the path and were back at the Allt an Rund where I poetically had a pee in the exact same location as earlier in the day. 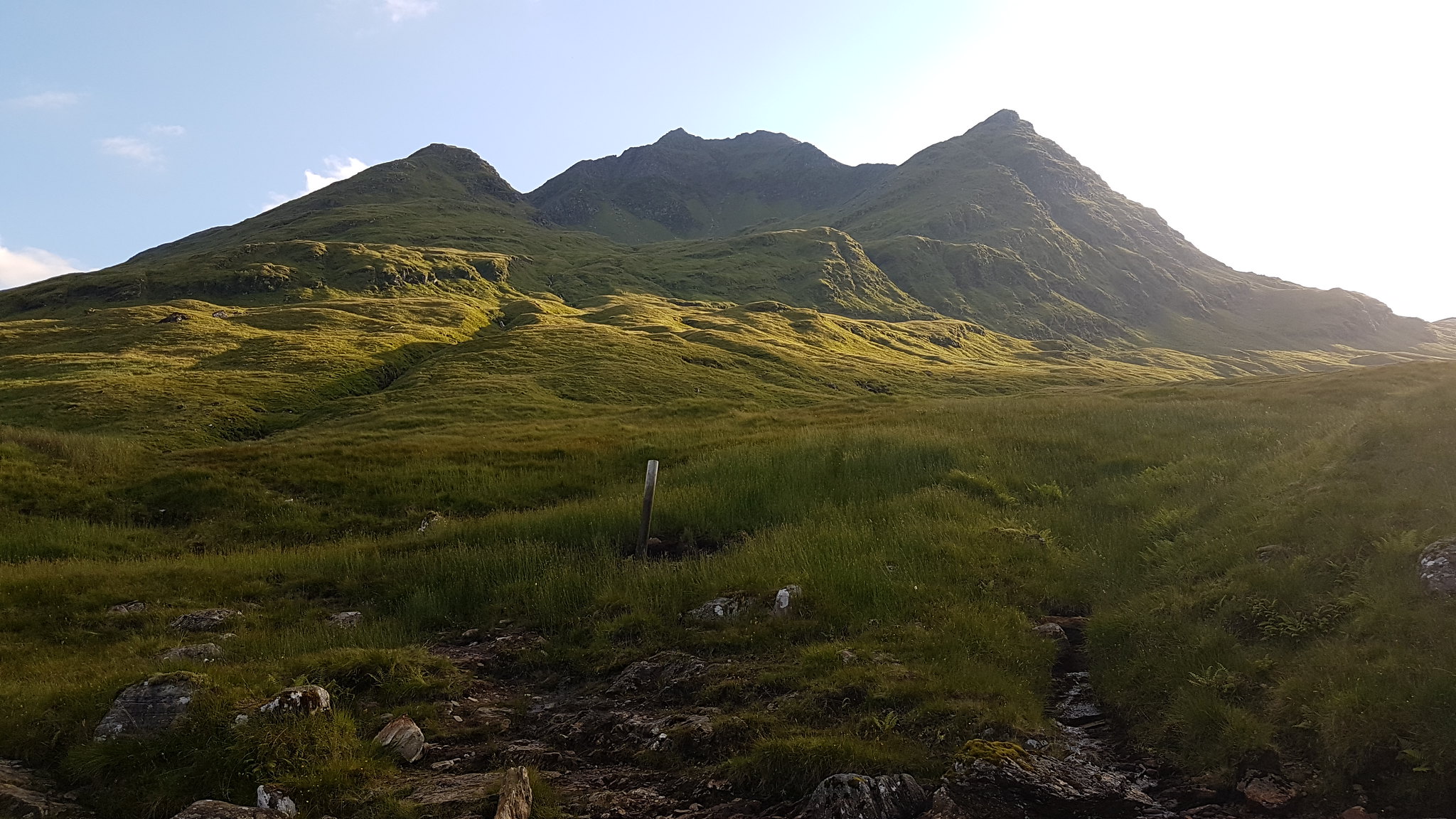 Back on the road now it made for much faster walking and the missus passed comment on how there's only 2 miles to go...I sympathetically kept quiet, I didn't have the heart to tell her it was more than double that distance

We walked for ages but we were only at the farm and now a rather large heard of cows were blocking the road, we slowly moved towards them but the unusually skittish cows seems to be rather afraid of us and bolted before branching off into a marsh.

As we progressed it was obvious that the GF was really suffering. Her steps had become awkward, slow and painful looking the distress was all over her face. I thought at one point I'd have to go get the car then drive back along the road to collect her. Like a trooper she kept moving, eventually making it back to the car.

She had the luxury of being the passenger so it was off with the shoes until we got home. I got her a wee chips & curry as a reward for a long hard day 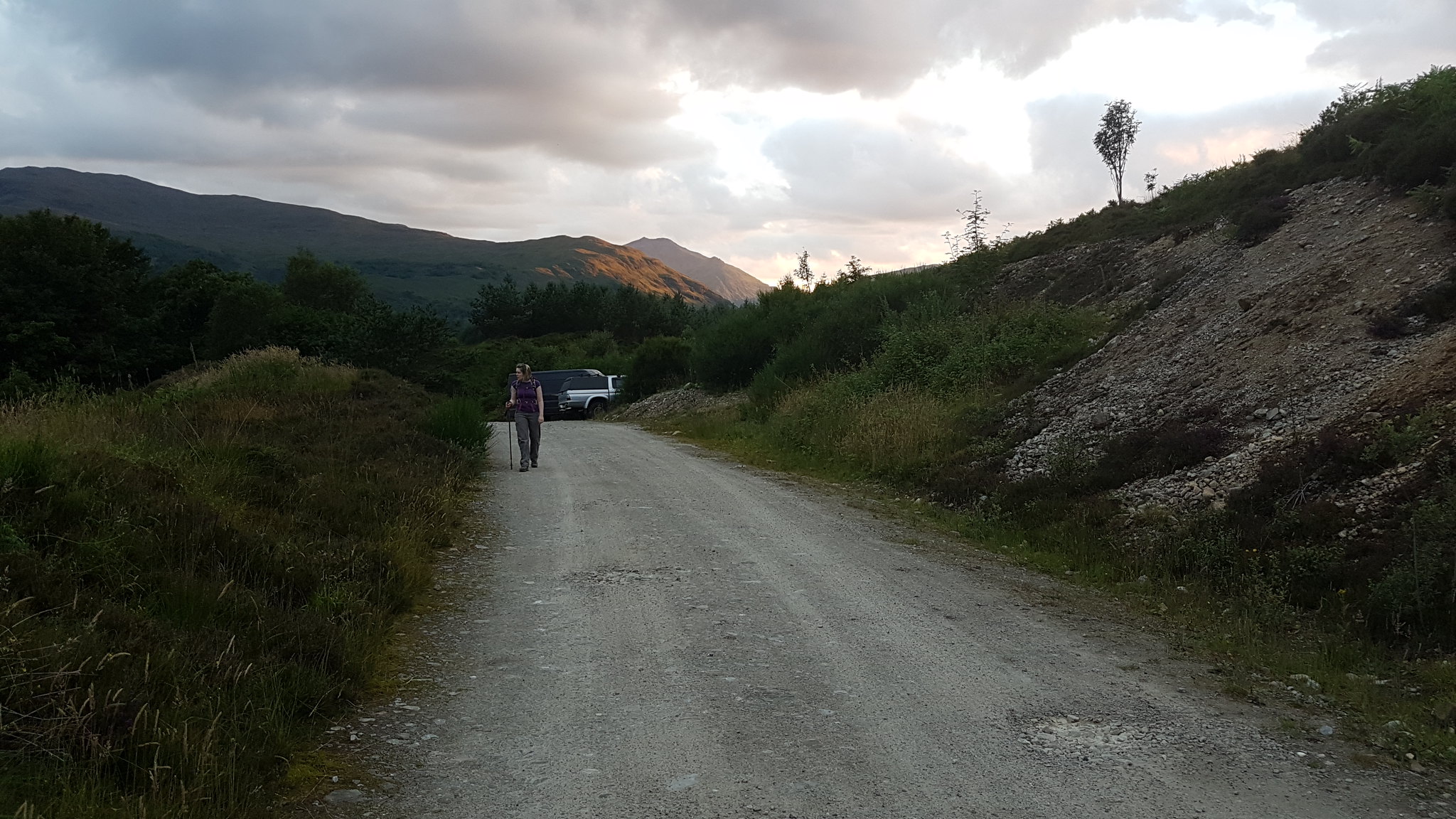 Almost back to the car

Re: Ben Lui and that other one.

Nice report and photos. "Ben Lui and that other one"... yes, it is a bit like that isn't it

Interesting (and sad) to see the plane wreckage - we missed that when we climbed it, also from Dalrigh.