Munros included on this walk: Derry Cairngorm, The Devil's Point

The day after our one day walk to Beinn Mheadhoin from the North (see separate report), Andy and I drove round to Linn of Dee to begin our multi-day expedition into the Cairngorms from the South. The weather was a bit overcast, but the rain was holding off.

Andy and I unloaded our heavy overnight packs and began the ritual last-minute gear adjust and consumption of chocolate which would only add to the weight and melt. I normally hate carrying a heavy pack, and plan my wild camping expeditions to bike in the gear whenever possible. I knew from my last visit that it was an easy cycle up to Derry Lodge, but we hadn't brought the bikes on this trip. Still, it should be a relatively easy, level walk, and Derry Lodge wasn't far. I didn't know if the Glen Luibeg path was bikeable.

Derryand Devil.gpx Open full screen  NB: Walkhighlands is not responsible for the accuracy of gpx files in users posts
According to the GPS it was about 2.75 miles from the car park to Derry Lodge and about 3.5 miles in total to our eventual campsite. This wasn't too bad for a walk-in with packs, helped by using two trekking poles, but it was still too heavy for my liking. I do try to travel light, but had still packed some non-dried food and a change of clothing. Halfway to Derry Lodge I realised I had forgotten my shaver and my camera. I was probably better off without the shaver - though a clean shave in the wilderness is a great luxury to make up for other privations. The camera was more of a problem, but I did have the iPhone. I debated whether to go back without a pack to collect the camera, but decided to make do with the iPhone and be careful with battery life. All pictures in this report are therefore taken with the iPhone. As we approached Derry Lodge, Andy spotted a little bright green butterfly which he claimed was a rare species (green hairstreak), and got quite excited about this. On checking later he found they aren't all that rare, but it was still a good spot amongst the bright green foliage. He also tried to pick up a green tiger beetle, which fought back.

We rested and had a snack bar by the bridge at Derry Lodge. It's a pleasant spot and there was a bit of sun. Suitably refreshed, we shouldered the packs and headed up the Glen Luibeg path. This bit wasn't really bikeable, but we could probably have got bikes up it with a bit of pushing. I'd read on Walk Highlands there were good campsites further on, and was looking out for them. Beyond the crest we found a great spot by the river in the shelter of some pines. Rocks and evidence of a fire indicated we weren't the first to camp here. For an evening stroll we walked up Glen Luibeg to the bridge over the Luibeg burn. Just before this is a deer-fenced area full of lush new vegetation where several paths meander across an island formed by the stream branching in two. In years to come this should be a wonderful area of regenerated Caledonian forest. From the bridge there were views up to Derry Cairngorm and Ben Macdui. In the opposite direction was a rounded hill with a big radio mast on top. I held my phone up towards it, and got a maximum strength Vodafone signal. There had been no signal back at the campsite, so I took the opportunity to call my wife and 2 year old son. He already knows "Daddy's going up a mountain"! Luibeg Burn from the bridge

Dinner was vacuum-packed 'Look What We Found!' (that's the brand) Gloucester Old Spot meatballs and boil in the bag rice. The meatballs were excellent - good enough to serve at home, so some of that extra weight was already paying off. I hadn't brought any wine (as I like to when biking in), but a wee dram of Glenmorangie Sauternes finish from the hipflask helped make up for that.

It rained during the night, and was still raining in the morning. We lay in our tents, trying to postpone the inevitable, but eventually had to get up. It always seems worse inside the tent, and it was just showery and not too windy. Having come all this way, there was no way I wasn't going up the hill.

We had two full days in the wilderness. Possible routes were Derry Cairngorm / Ben Macdui / Carn a 'Mhaim and the Devil's Point. I wanted to save the latter for a clear day if possible and we were camped right at the foot of Derry Cairngorm. Derry Cairngorm it was then, and maybe we'd go on to Ben Macdui if the weather cleared. I'd previously bagged Ben Macdui from the Cairngorm plateau and just wanted to do it from a side that did it justice, which needed a clear day again.

So we slogged up the grassy, heathery slope and eventually found the Munro-baggers' path along the ridge. This skirted the first non-Top by a rocky ledge path above Glen Derry. We were just on the edge of the cloud now and it was raining again, so views were intermittent. This would be a great route on a fine day (pictures below are from the descent, when it was clearer). on the ledge path It was then just a matter of toiling up the final slope in the mist to find the summit cairn. We went up snow patches where possible, to add to the interest and for some relief from the rocks. We had Lunch Part One at the summit cairn, where brief breaks in the cloud showed what might be the slopes of Beinn Mheadhoin and Ben Macdui. But it was not a day for going on. We headed back down the way we'd come. For variety, rather than head back down the slope to the campsite we decided to follow the Munro-baggers' path all the way down. This turned out to be a good path all the way back down through woods and out to the bridge at Derry Lodge, where there was even a bit of sun by now. It always seems to be sunny when I pass through there.

Dinner was Sainsbury's vacuum-packed sweet & sour chicken. Not as nice as the 'Look What We Found!'.

No rain to speak of this morning but a bit more wind and rather colder. We made an early start for the Devil's Point. This was the main objective of the trip, and would have been a big one day expedition from Linn of Dee.

We followed the Glen Luibeg path back to the bridge then on over the hillside beneath Carn a'Mhaim until the Dee valley and Devil's Point came into view. view back up Glen Luibeg from beyond bridge We descended to cross the bridge and check out Corrour bothy, which made a nice sheltered spot for a Mars bar break. Someone was camping outside. 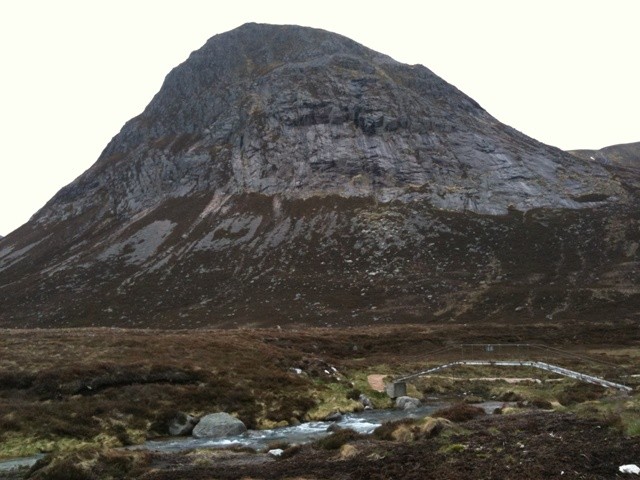 Andy checked out the elaborate new toilet extension to the bothy and we then headed up the slope behind. The lone camper emerged from his tent at this point, and we later saw him on the hill as we descended from the summit. It was a straightforward ascent by the stream. There are paths either side, and we crossed over to the left bank further up. The summit ridge then curves back up to the top of the Devil's Point, falling away in fine cliffs to Glen Geusachan, with the desolate-looking Beinn Bhrotain beyond. I tried suggesting to Andy that looked a good one to bag on a future trip, but he was unconvinced. Looks like it will be a solo trip – maybe biking in via White Bridge. We lingered a while at the summit having Lunch Part One, checking email while there was reception, and admiring the view up the Lairigh Ghru (which is now the wallpaper on my iPhone). It's particularly satisfying to look at those impressive mountains and realise you've already bagged them all. We considered doing Carn a'Mhaim today (as I hadn't bagged it yet), but it was never really going to happen as the walk was big enough for us already. Cheese and oatcakes at the summit shelter The walk out simply reversed our route back to the tent. Dinner that evening was ‘Look What We Found!’ chilli con carne, which was also excellent. The sign in Corrour Bothy had warned that no fires were permitted, which was a shame because there were some good stones lying around and plenty of dead wood, and a fire would have been just the thing on a cold evening... We packed up the tents and walked out the following morning. The packs were a bit lighter without the food. Unfortunately there was no time to bag another hill, as I had to drive home to London that evening.

Despite the variable weather, it had been an excellent expedition. It could be done in two days, with one night's camp between the two hills, but this way fitted in with the travelling before and after and it's always good to camp out in the wilderness.

Re: Derry Cairngorm and Devil's Point from Glen Luibeg

Excellent photies of me old stamping ground, you're making me homesick. And just ignore any bullsht "instructions" like 'no fires' - what are they gonna do, arrest ye?

Re: Derry Cairngorm and Devil's Point from Glen Luibeg

Ahhh, Linn of Dee.... This is bringing back memories, my holiday in August, in Braemar. Only have videos of the walk up to Derry Lodge where I met a man camping there. He was eating his lunch, had no hair and a long beard