Some hills around the Great Glen

Some hills around the Great Glen


Family holiday time in Coylumbridge with various members heading up at different times from different starting points. Decided to take the opportunity to head up a bit earlier and cover some of the hills to the east and west of the Great Glen before driving over to Coylumbridge. Carn na Saobhaidhe was intended for the Saturday afternoon but decided to leave it off until the following week due to the weather.

Drove up to Garva Bridge then along General Wade’s road to park just before the bridge. Walked past the bothy then up the hill.

Weather was OK and the start but needed to put on waterproofs part way up the ascent. No view at the top due to clag and rain. Had half considered the traverse to Meall na h-Aisre but not a good option given the weather.

Back down more or less the same way but a bit more direct. Visited the bothy on the way back to the car then drove back to Garva Bridge.

Had considered a couple of routes but decided to have a look at the new wind farm access route and ended up following it almost the whole way up until crossing on to the grassy slopes of the SW ridge.

Positive reception from various guys working on/around the track and a few vehicles stopped to check I was OK and warn me to be careful as they were working on the track ahead.

Still had the waterproofs on but the weather had by now brightened a bit.

Back down the same way.

Met a couple from the Lake District and we walked back to the cars together. The set off for the drive to Glen Roy. Took a bit longer than planned due to roadworks holdups.

Parked just off the road before the bridge at NN308891. Crossed the bridge then started up the hillside.

Very steep until it started to level off a bit at around 650m.

It had turned into quite a nice evening. 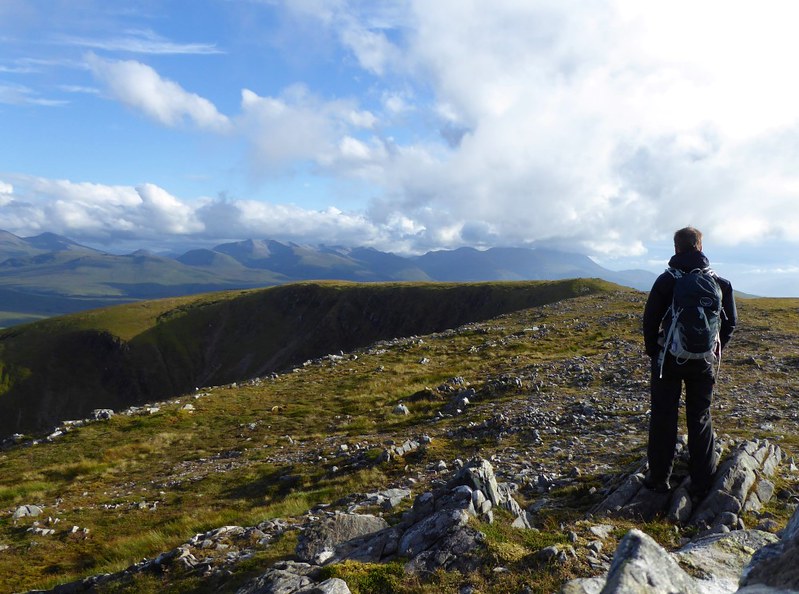 Descended initially the same way but went more to the north which wasn’t quite as steep. Back at the car, then drove up to the northern end of the Glen. Erected the tent close to the car for the night and cooked up dinner – the midges were out in the force as the wind had died away almost completely.

Had breakfast and packed up. Damp and grey start to the walk up past Brae Roy Lodge.

Followed the track NW towards Gleann Eachach – walked past one lonely chimney then another.

Then followed a faint and at times disappearing track up to the bealach between the two hills. Turned to the north and walked up to the first summit Carn Dearg (Gleann Eachach-North) but no view in the clag.

Retraced my steps back down to the bealach then over some peat hags and SE up to the second summit.

More or less due south form the summit took me back down to the west of the Allt Dearg to the main track.

Then walked back to the car for a brief respite and some early lunch.

Walked down the road to the bridge at NN331491. Crossed it then followed the path SE before breaking off to head uphill in an easterly direction.

Coire na Reinich was topped off in cloud unfortunately

Waterfall on the far side

Didn’t hang around long before retracing my steps back down to the glen.

Back to the car, got ready and then drove back down the glen and round via Spean Bridge to Kilfinnan.

Fairly decent evening but some clouds in the distance were threatening rain so opted just to keep the waterproofs on. Walked a little back down the road from the parking space then steeply NW uphill until reaching the path.

Windy higher up and the path disappeared – either that or I couldn’t see it so just headed straight through the grass and heather which was quite hard going at times.

Found a path higher up for the final stages

Back down the same way except for the last section where I took a more direct route back down to the car through some tall ferns. Erected the tent not far from the car and cooked up dinner – the rain was on for the night but at least the midges had gone.

Had breakfast, packed up and drove up the A82 to get fuel and Invergarry before going on towards Fort Augustus and branching off up the B862.

Parked at the side of the entrance to the wind farm track before the gates and well out of the way of traffic - seemed to be OK and a wind farm vehicle driver seemed fine with it.

Cycled up the track to the bridge at NH416064 where I locked up the bike and set off southwards on foot. Full waterproofs needed again.

There was a lot of water in the various streams.

Better if restricted by cloud views higher up

But none at the top

Back down the same way – again a bit clearer lower down.

Back at the car, it was decision time about whether to cover Carn na Saobhaidhe that afternoon or not. The weather was still on the wet side – that and the idea of a shower, food and drink at Coylumbridge swayed it. Put the bike back on the car, removed the waterproofs started on the drive up the B851 to join the A9 down to Coylumbridge.

Needless to say the weather cleared on the way up but by this time my mind was made up.

The weather was rather mixed all week but Saturday’s forecast looked good. Set off early for the drive up the A9 then down the B851 to park by the phone box at NH607245. No walking today as there’s a cycleable track all the way to the summit.

The first part is on the wind farm track past Dunmaglass lodge southwards.

Then split off down to the right.

Detour to the bridge on the right.

Lot of water in the streams

Reached a cabin which had been recently refurbished – had a look inside but didn’t go in as I didn’t want to mess up the floor.

There were a few water crossings required. At the first, I just removed the shoes, insoles and waterproof socks then out the shoes back on to wade across – dried feet, inserted the insoles and put on the socks before heading off. Should have consulted the map as there was then another just around the corner. This and he next few times I just waded through – at least the waterproof socks in breathable cycling shoes keep my feet dry but don’t stop my toes freezing.

Got to the cairn at the top but the ground looked a little higher over by the fence so cycled over to it as well.

Not much to see up here

The rain was spitting on and off – not quite was forecast.

Then a great cycle back down to the car – very few ups and a lot of downs.

It had taken 3.5hrs from car to car – was back at Coylumbridge late morning in time for lunch.

Great to see some of my "local" Corbetts again

We did many of them in winter conditions, just because they are close to home. The two Deargs at the top of Glen Roy must be in the top 5 wettest hills in Scotland, but we climbed them in the rain so maybe I'm biased

The windfarm track to Meall na h-Aisre must be brand new - I remember it wasn't there when we climbed the hill (2014 I think). It seems those access roads pop up everywhere. We used to play "windfarm spotting" on mountain summits, nowadays it's "bulldozed track spotting"...

BlackPanther wrote:The windfarm track to Meall na h-Aisre must be brand new - I remember it wasn't there when we climbed the hill (2014 I think).

I think the public consultation was October 2014 so probably started after you were there. I had a hunt for info beforehand and phoned the SSE Community Team Manager to check it would be OK before I went - he was very helpful and said it should be fine. Not certain, but I think it goes right up to the B862 and is the windfarm track at the start of the walk to Carn a'Chuilinn. Walking from Garva Bridge while they were working on the track was one thing, but not sure I wanted to try cycling at the moment in case there was an issue.

Yes, that's one reason for my putting off the corbetts in Glen Affric for the time being as well - cheers