This is my first report. About twenty years ago or so, I was a very occasional hillwalker, but after stumbling into early retirement in February, I decided I needed something physical to do, so in April aged 62, I decided to start hillwalking again. I told friends and family that I was going to climb Mount Everest this summer, but to take the stunned look off their faces, explained that I was aiming for combined ascent of 30,000ft in the Scottish hills. I'm happy to say that I passed that on my eleventh walk on Ben Ledi. Making it even more enjoyable was the fact that for six of these walks I was joined by my 9 year old grandson, Matthew, giving him something to do during the school holidays.
For my twelfth walk Matthew and I set off for Beinn Narnain, which would be his third Munro after Ben Lomond and Schiehallion. (Conic, Cobbler, and Ledi being his other walks). After studying a Youtube video we found the small path that cuts into the trees almost immediately after beginning of the main path (just before the telegraph pole). The rain on Friday meant that we were soon walking in a stream and negotiating boggy bits and by the time we cleared all this to reach the first grassy plateau, Matthew was in a fair old state. He had sunk to his knees a few times and had also sat back on his behind, so he was "mockit" from the waist down. 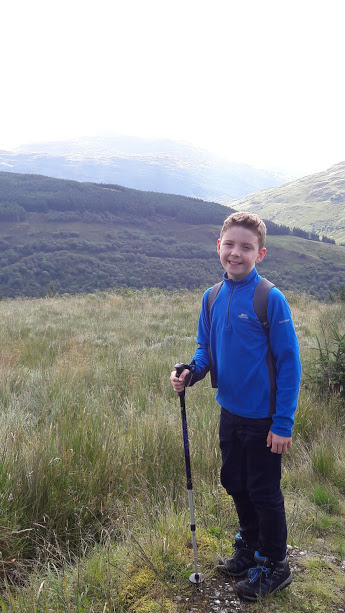 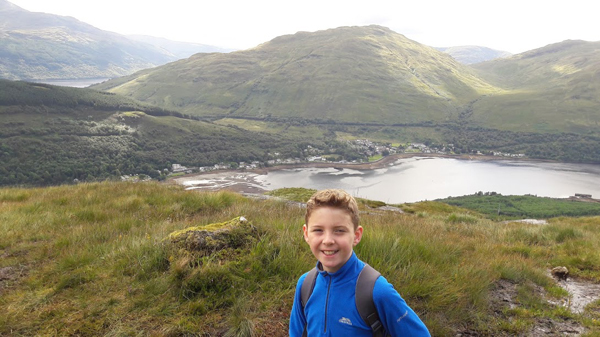 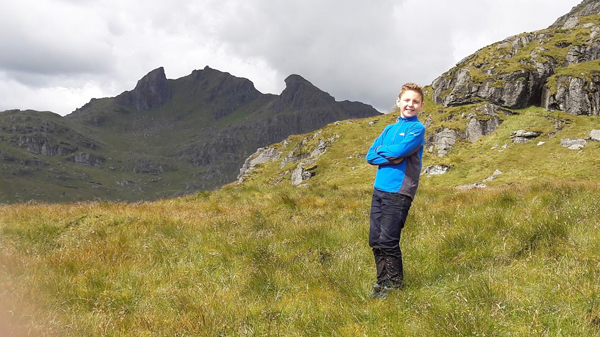 first view of the cobbler without cloud cover

His spirit was lifted though when we got our first sight of the mighty (Matthew's word) Cobbler. 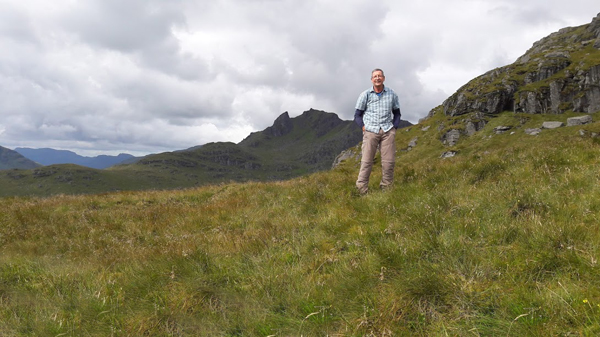 me and some of the cobbler

We had done this a couple of weeks earlier but the three summits were in cloud at all times with no view from the summit, so he was thrilled to see it in all it's glory. 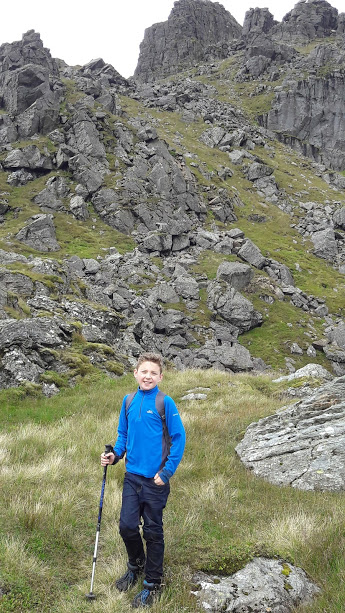 getting to the scramble bits

Onwards and upwards with some scrambling and some narrower ledges which made me a little nervous for Matthew, but eventually we were at the bottom of the "spearhead" and with a "puddy up" for Matthew at one bit, we eventually rounded the back of the spearhead and Matthew raced on to the summit, happy that we had climbed Narnain "the hard way". 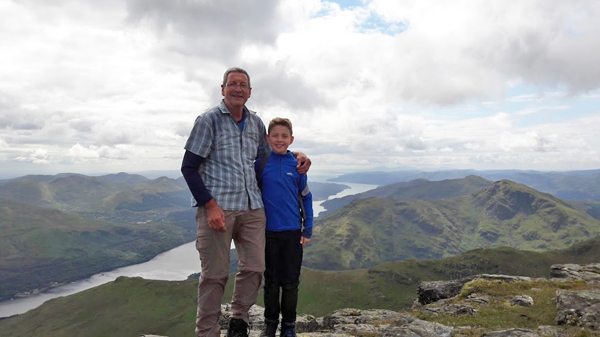 me and matthew on the summit

I have to say, without wishing to put Matthew down, when we first started these walks, I was unsure how he would react when the "going got tough", but it has been great to see his determination to get to the summit and his satisfaction of achieving "the goal".
After pics and lunch we descended the back route to the bealach, crossing a huge boulder field and more boggy bits till the newly built bit of path was achieved and eventually the main path. Time constraints meant Ime wasn't possible (previously arranged dinner date with friends in Glasgow that evening) which was a pity as we were both up for it.
Back along past the Narnain Boulders to the car park, 7hrs after we started. 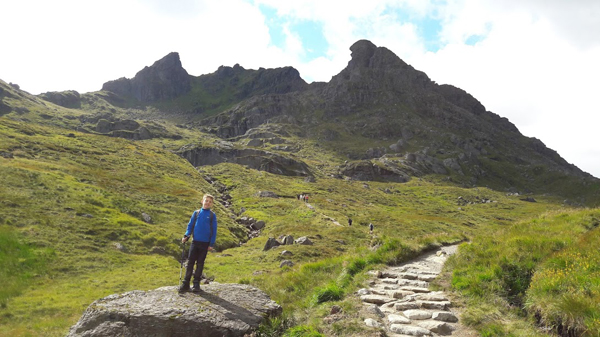 returning in the bealach

My car is only a couple of weeks old, so much to Matthew's "do I have to?" both doors were opened whilst he took off his boots, socks and trousers and jumped into the back seat in his underpants (must get his mum to give me a spare pair of shorts or trousers in the future, not just socks and t-shirt). All in all, a great grandfather, grandson day!

Good. I like to see photo's of hills, but better hills and people

Well done.
Great pics. It makes me optimistic that my 6yr old will soon be interested in joining me

Well Done Matthew...lets hope there are many more "mockits" to come!

I love to see kids on hills, I started all of mine really, really young and all three into adulthood still regularly walk and still love it!

JimboJim wrote:Good. I like to see photo's of hills, but better hills and people

The Lady In Ivan wrote:Well Done Matthew...lets hope there are many more "mockits" to come!

I love to see kids on hills, I started all of mine really, really young and all three into adulthood still regularly walk and still love it!

Thanks. I forgot to mention he also went knee deep down a hidden, grass covered, water filled hole. All part of the fun!

RTC wrote:Well done on getting young Matthew out on the hills.

willsdad wrote::clap: Well done.
Great pics. It makes me optimistic that my 6yr old will soon be interested in joining me

Thanks. I'm a bit surprised how keenly he has taken to it. I took him on a reasonably easy walk (Meikle Bin) in the Ochils when he was six, but it's just this summer we have both taken it a little more seriously, so I hope you can get your six year old started soon.

rockhopper wrote:Nice day for it and a good first report - well done and to Matthew as well - cheers

Well done both of you, looks like a great family day out on the hills!

Dig in Matthew and you'll achieve all your goals.
Well done.

Wow - not only do we share first WH reports, but yours is absolutely lovely! My dad took me out in the mountains when he retired and I was 15 (so quite late) and I've always been grateful. Lucky Matthew!

I'm only 21 and I'm feeling the grandfatherly love! The Cobbler was the first proper hill walk I went on with my dad a few years ago - your report brings back some nice memories