This Graham is worth saving for a sunny day for many reasons. First, it's an excellent viewpoint. Second, it provides some good optional scrambling, which is best done on dry rock. Third, the descent route crosses an area of bog and peat hags, also easier to tackle in dry conditions. Overall, Carnan Cruithneachd is a wee gem, very entertaining and surprisingly, almost unknown. We didn't meet a single soul, though the car park in Morvich was full. I guess everybody else run for Beinn Fhada or A Ghlas-bheinn, leaving us the pleasure to explore the Carnan Cruithneachd playground

Since my accident in early 2016, I was put off scrambling and became very wary of any exposure. The memory of my split knee pushed my confidence down into a black hole of fear and it took some time to climb out of it. Thankfully, I'm now back to where I had been before the injury and looking forward to visiting the Cuillin ridge in the future...

But before attempting any big scrambling expeditions, we decided to bag this shy Kintail Graham, which many of you probably never heard of

I'm not sure if the word "bag" suits this hill. "Bagging" suggests a boring slog, which Carnan Cruithneachd is far away from!

The Graham is situated between Glen Elchaig to the north and Beinn Fhada/A Ghlas-bheinn ridge to the south. A good vantage point for the surrounding Kintail and Affric mountains, it can be climbed from both north and south. The southern approach is shorter and easier to drive to so this was our choice. Parking is the same as for Beinn Fhada and the route follows the route to Bealach na Sgairne for the first 3km or so.

Track_CARNAN CRUITHNEACHD.gpx Open full screen  NB: Walkhighlands is not responsible for the accuracy of gpx files in users posts
Weather was very bright in the morning but forecast suggested more cloud and even an odd shower later on so we came prepared

The morning glory in Kintail

This path is well marked "to Falls of Glomach". We've been here countless times but it's always nice to come back: 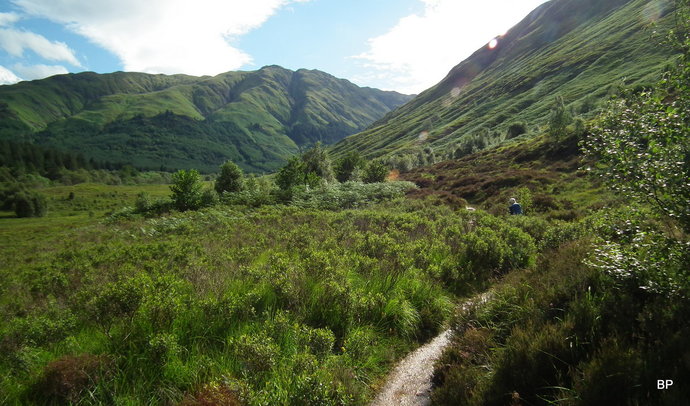 The turnoff for the falls is marked, too. The bridge is well hidden in the trees and can't bee seen from above... 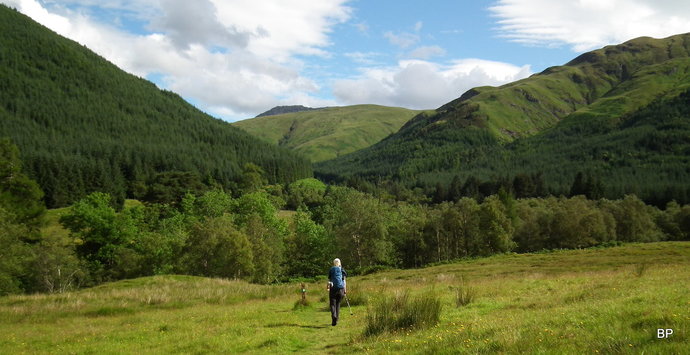 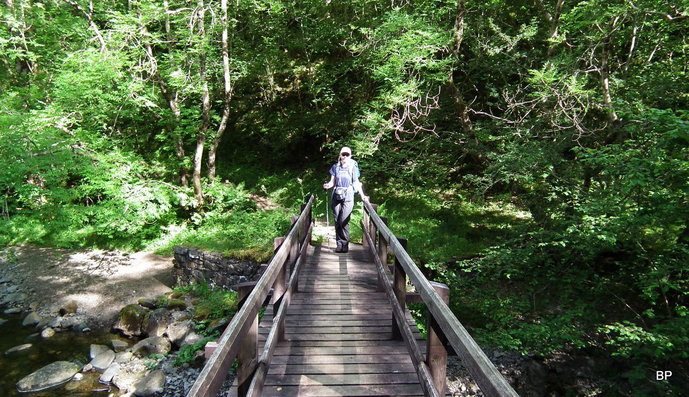 On the gate leading out to a pasture, wee Lucy found something interesting for herself: Beware! Sheep are in the area! Despite the warning sign we didn't meet any sheep when crossing the meadow and soon we reached another gate: Now comes the tricky part. I'll try to explain it. One might really get confused in the forest as there are many tracks in all directions. Just past the gate, turn left. After 200m, another track joins in from the left - ignore that. Another 200m further on, the track splits in two. The right hand side one (marked "Falls of Glomach") crosses the stream and climbs up the other side of the glen - this would be our return route. We stayed on the track to the left of the glen: After about a kilometer, the track turns sharp left (ignore the path to the right) and begins to zig-zag up the slope, becoming steeper and more eroded. After a few zigzags, take a very eroded, steep track through the forest, branching uphill from NG983238. This will eventually lead ou tof the woods and onto the open hillside.
The steep track: 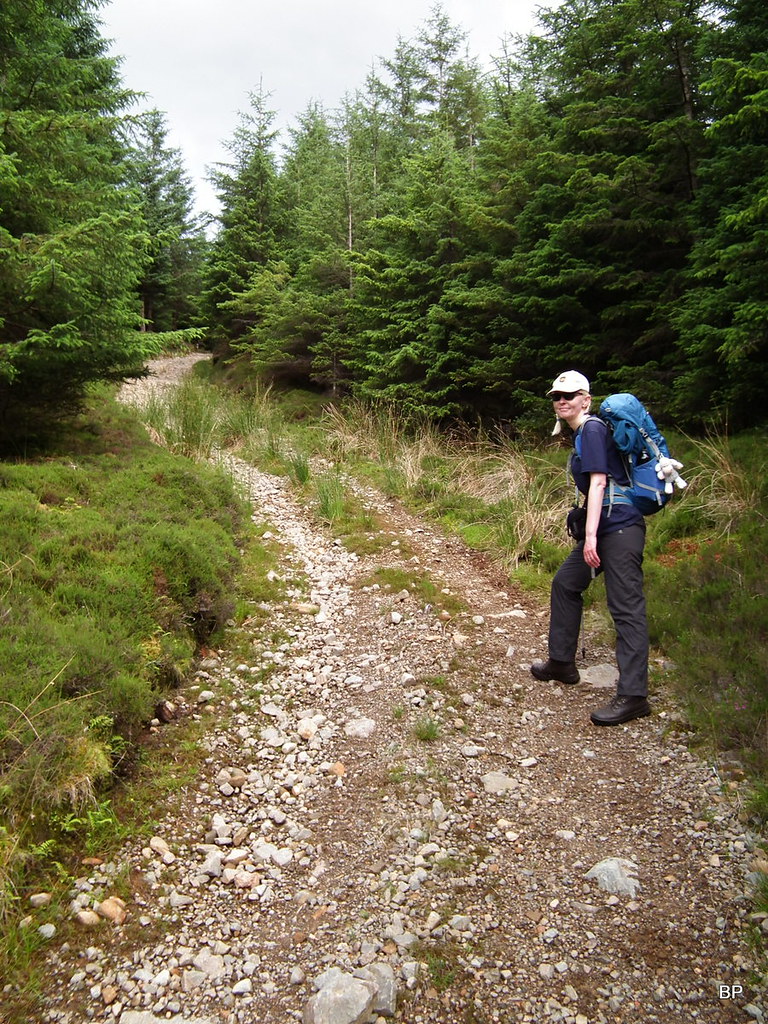 2017-07-21 carnan cruithneachd 038 by Ewa Dalziel, on Flickr
Cloud was gathering in the northern sky and wind picked up but I was desperate to get out of the forest labyrinth! Panorama of Beinn Fhada and A Ghlas-bheinn from the track just above the plantation:

The stalker's track leads all the way to the high col (Bealach Con) and offers relatively easy going despite being very eroded in places. We had to stop to apply repellent as clegs were in very aggressive mood. I noticed they are most annoying in sheltered glens and in forested areas with plenty of shadow. When we gained height, we saw the crest of "our" Graham peeking out - a very appetizing view for scrambling enthusiasts:

One can make the ascent of this hill as as or as difficult as desired. All the scrambling "pockets" can be avoided on the grassy stretches, but we wanted to try some games on the rock - a "direttisima" to the summit

A helicopter was flying around, we saw it going to the Falls of Glomach and back a few times, probably taking tourists for a ride: We crossed the stream, where the track deteriorates to a wet path, and followed this path for another 600m. The rocky slopes of Carnan Cruithneachd loomed above us and I was getting even more excited: We left the path eventually and charged up. Very quickly, the angle becomes acute, but climbing is easy on the grass & heather: 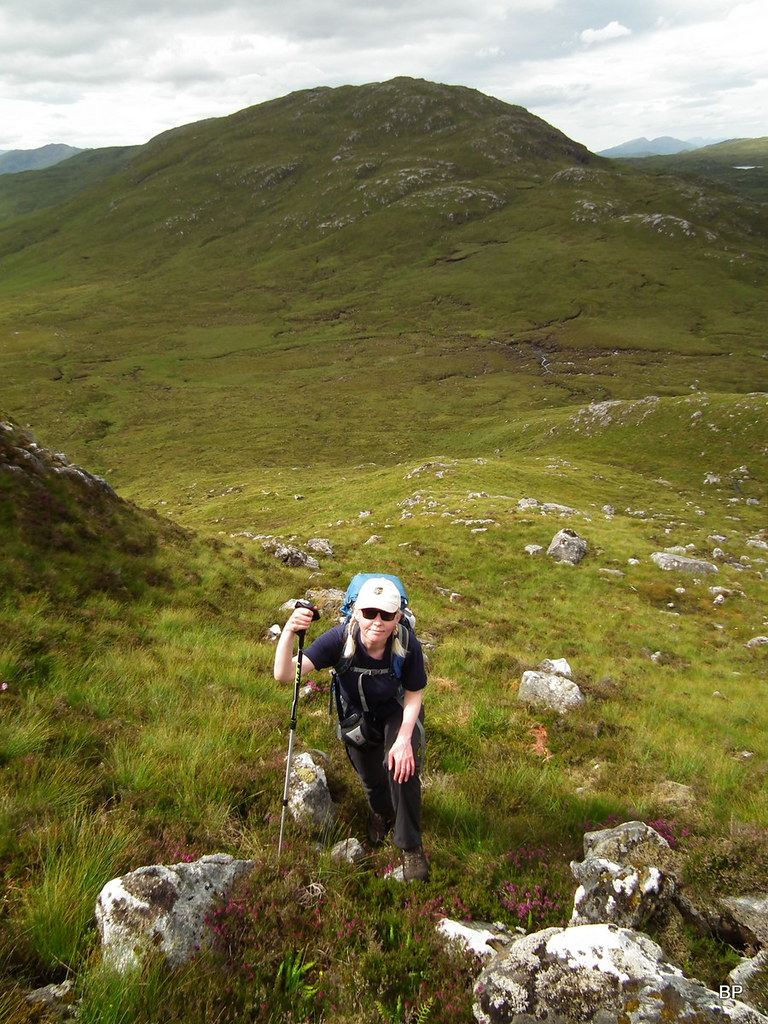 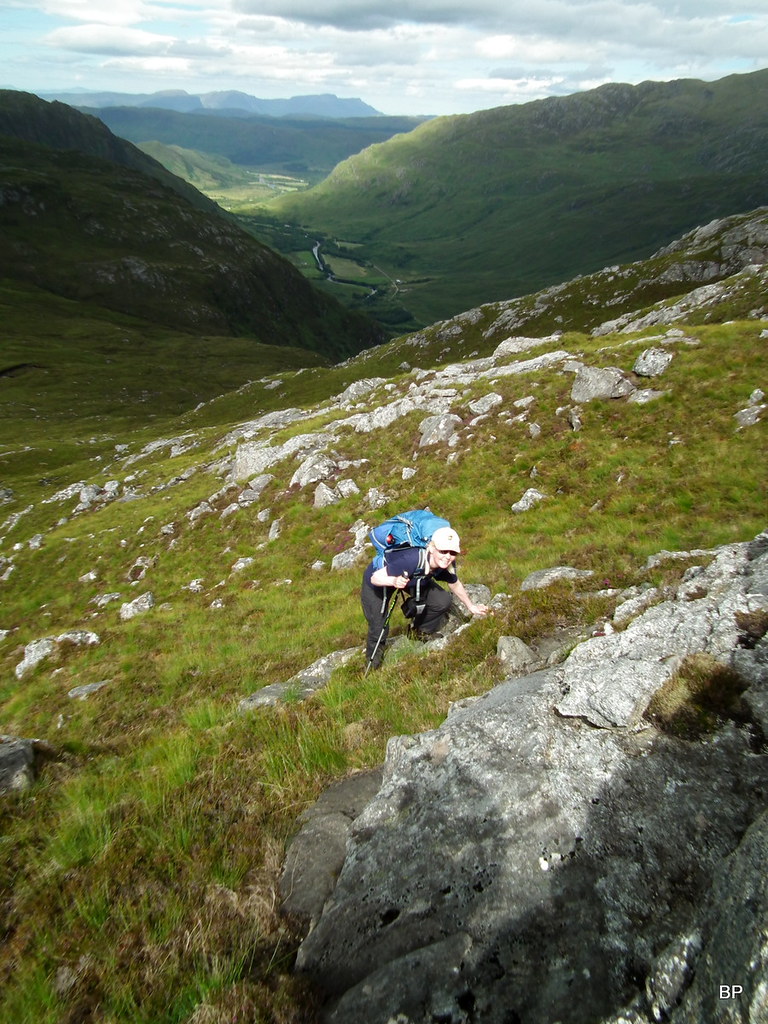 2017-07-21 carnan cruithneachd 080 by Ewa Dalziel, on Flickr
Views were getting better and better, especially to the NW, the lower Glen Elchaig and the Applecross ridge on the horizon: The final 100m, as this photo shows, can be as easy or as hard as one wishes. The harder bits can be avoided on the easy, grassy slopes, but we went straight up the rocks in the middle: We spent more time than anticipated, scrambling over rocks, Kevin is good at finding good places for practicing, he would go up first and then watch me going up the same way... For him, it was so easy that he didn't even bother putting his camera and walking pole away

I soon discovered that I wasn't afraid at all, just a bit cautious, but overall, it was fun!
He knows what he's doing... Higher up, Kevin spied an almost vertical rock, maybe 3m high, but it had a few splits and cracks, giving good footholds. "Can you do it?" he asked "I'll try if you go up first." A few minutes later we were standing on top and I knew that my scrambling confidence was coming back.
Closer to the summit, the angle eases off: 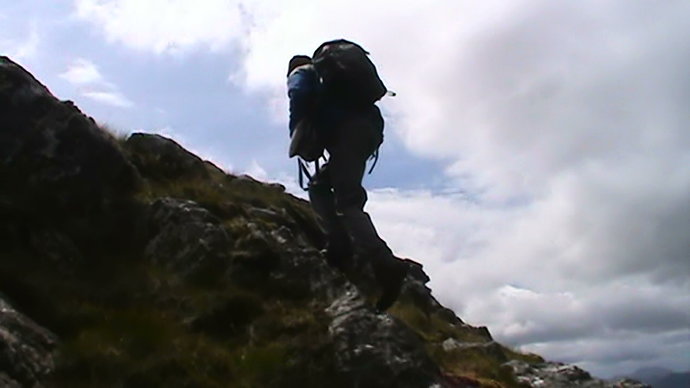 We passed a tiny lochan and now we could see the summit on the opposite end of the ridge: 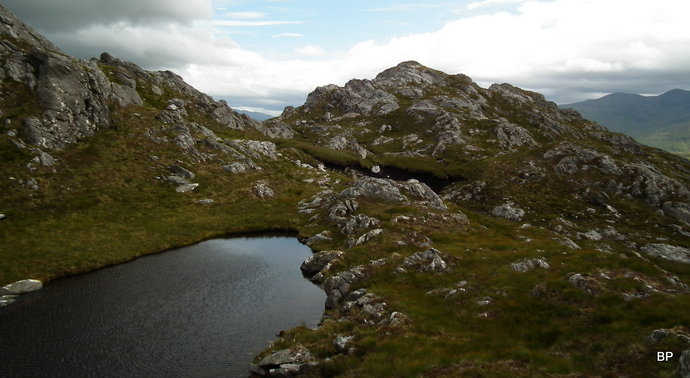 Loch na Leitreach from just below the top: 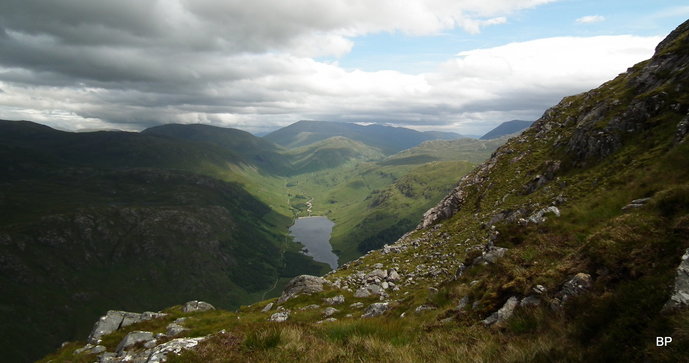 The summit of Carnan Cruithneachd is something special and if looking to be close to heaven in Kintail, this is the place to visit. Views are amazing, especially down to Glen Elchaig. Wee Lucy bagged her 46th Graham, for me it was a round 80th! Hoooray! 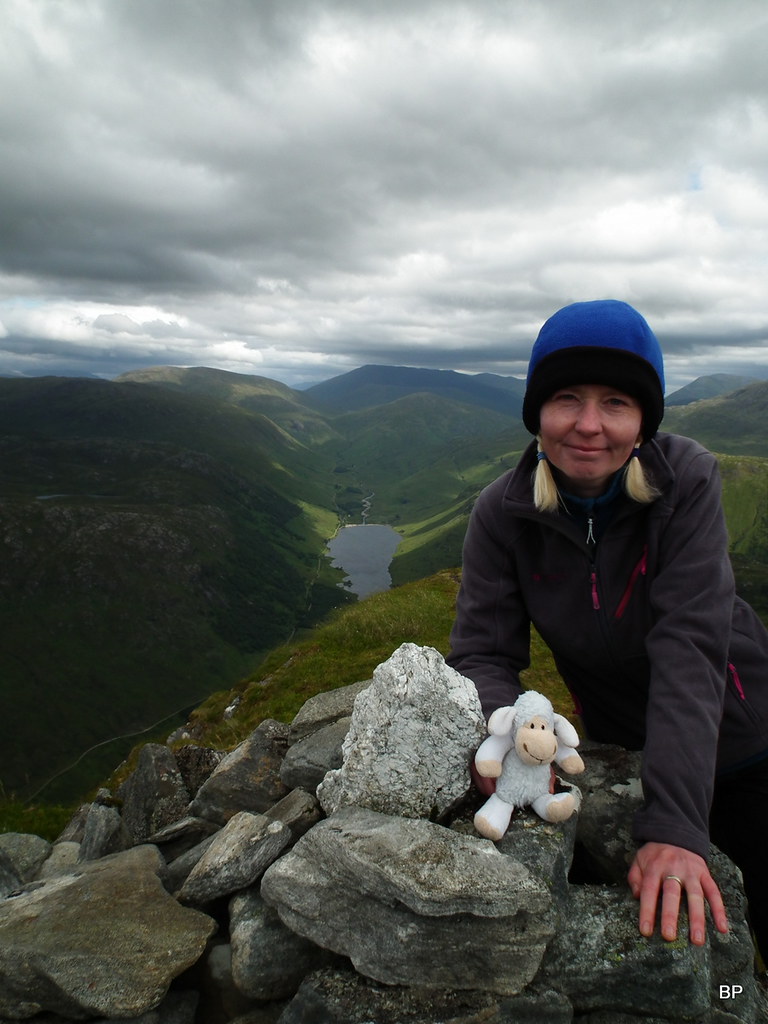 I'll leave you now with some photos we took from the summit. We spent a long time by the cairn - it was such a fantastic spot that we found it hard to leave 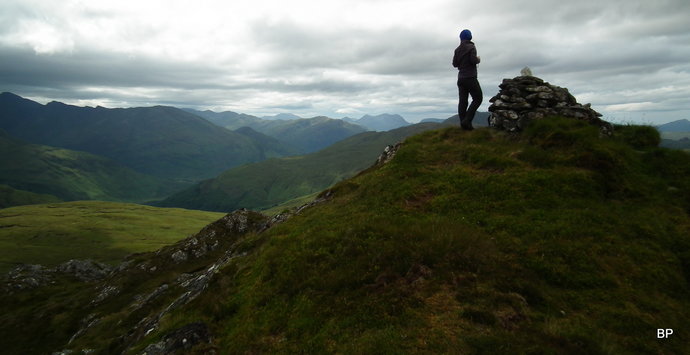 Instead of returning the way we came, we decided to do a circular and descend via Suie Dhu, to pick the path to Falls of Glomach. It is possible, time permitted, to visit the waterfalls but we have been there before and the falls are best in spate, when full to bursting

Our descent was very steep initially, care is needed on the step upper slopes: 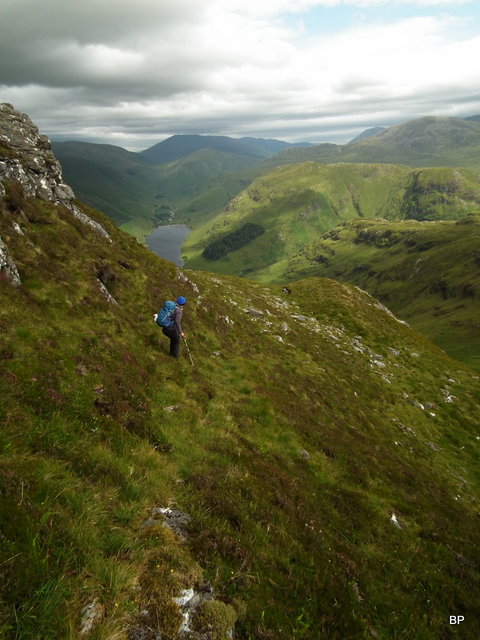 Lower down the ground is almost flat and by going over the small lump of Suie Dhu, we avoided most of the peat and bogs: The south face of Carnan Cruithneachd seen from Suie Dhu:

It might not have been a huge walk but very entertaining and I was more than happy!

Another helicopter flying past:

Cloud gathering over Kintail (the copter seen in the sky as a small black shape):

The final descent to the path was a bit peat-haggy, but one can avoid most of the quagmire by sticking to higher ground for longer:

Once on the path from Falls of Glomach, the rest of the return route was a formality. We fought a battle with noisy clegs on the way back through the forest, but managed to get back to the car without any serious wounds

.....
Summing up, what a hill. Very little known, but a true gem. Highly recommended to all visitors to Kintail area. I guess it gets overlooked simply because it's surrounded by so many majestic Munros that nobody notices its presence, but Carnan Cruithneachd is a hillwalker's delight. And all the scrambling training paid off three weeks later, when we laid siege to the Sutherland Fortress and emerged triumphant (more about it in TR's to follow).
.....
In my next story, we'll visit one Graham and two very long ridges in the heart of stalking country. Report will come soon.

That looked a really good walk and scramble, inspired by your report it is one we definitely one we must try. Well done for describing the forestry paths, the toughest navigational challenge of any walk

. Pleased you are getting your scrambling confidence back, some good action shots.

Good result and does make for a nice viewpoint as you say.
Glad to hear you're getting your confidence back - cheers

Morvich car park was busy that week going by the reports. Looks a nice walk...if only I knew about it

Thanks a lot folks

I'm slowly returning to my scrambling self

Last Saturday I passed another test on Foinaven - the ridge has some steep, rocky sections where hands are needed and I absolutely loved it!

Carnan Cruithneachd is easy by scrambling standards and the rocky bits are not compulsory, but it would be a shame to use the cheaters way up, especially when conditions are good. And the summit has WOW factor. What's funny, so few people bother with lower hills in Kintail. The only walkers we saw were on the path on the way back (probably returning from A'Glas-bheinn). So if looking for solitude, this is the perfect hill