This one's been planned pretty much all summer and as the climb neared, two weeks out the weather looked like it wouldn't play ball. On the drive up on Aug 11th the rain followed all the way from the central belt and on entering Glen Shiel itself all that was visible of the south ridge munros were the very lower reaches.
After a rainy overnight at a midge-infested Shiel Bridge campsite, the following day was at least downpour-free. Parking spots recce'd the night before, one car was getting left at the lay by with the battle signpost, the other at the roadway to the east of Cluane Inn.
Setting off slightly later than intended at 8.30am, car 1 was dropped in a really sharp downpour but it seemed to be moving through as were the clouds covering the summits.
Car 2 parked in the layby at the entrance to the old road to Tomdoun, east of Cluane Inn. The layby only has space for maybe 5 or 6 vehicles but we got one and kitted up. The weather still seemed unable to make up its mind - to the east bright sunshine, to the west, beyond Glen Shiel dark skies threatening more rain.
Off we set, waterproofs on, along the old Tomdoun road which leads to the start of a stalker's path up Creag a' Mhaim. This is a good route in as per the WH directions and pretty straightforward. You skirt around the mountain heading south/south-east. Pretty much on cue, around 6km in and 1km from the road's highest point, there's a small cairn on the right hand side signifying the start of the stalker's path up. This zigzags up the shoulder of the mountain with the impressive views of Loch Loyne and neighbouring Gleouriach and Spidean Mialach opening up.
It's stalkers path pretty much all the way to the top and the summit was reached by about midday, with the WH and guide books ringing in my ears that by this point the hard work for the day is over.
The view from the top is something else - north to the Sisters and Brothers (and beyond), to the west, the South Glenshiel Ridge itself.
The route from here is pretty clear and there are no apparent difficulties. Druim Shionnaich is next and is reached in about an hour, with a spectacular rainbow to the north appearing just below us.
Again from the top, the onward route is clear - with Aonach Air Crith, the highest summit on the ridge next up. Again, the path is straightforwardly followed with breathtaking views all around. This really is proving to be an airy ridge walk with the steep drops to the right on the Glen Shiel side and more grassy slopes (but still steep) to the left/south.
Aonach's craggier top is reached by around 3pm, with our pace dropping. Lads who'd come up Craig a'Mhaim and passed us were marching on trying to complete all 7 munros on the ridge - this had been our intention too but was starting to look beyond us at this point.
The drop from Aonach Air Crith's summit is a really interesting downward scramble although there's a path. It does feel quite exposed on both sides. It's only when you look back at where you've come from that you realise how epic this route is. Not a hard scramble by any means but if you're a bit anxious about the exposure i can imagine it'd need every ounce of concentration.
As promised by this stage, the views to the south west are awesome - Beinn Sgritheall and Ladhar Bheinn in particular looking frighteningly bulky even this far away.
Summit number 4 Maol Chinn-Dearg is a real effort by this stage and it's reached at 4.45pm. We decide that we're done at 4 and will return for the other 3 another day. So begins the trudge off via the WH and guide book route down the north-east shoulder towards the main road. It's pretty boggy in places, especially lower down. The Cluanie Inn sits around 4km to the east although we aim straight for the roadside which we arrive at by 6.30pm. With the prospect of a long walk to car 2 or thumbing a lift, a kindly Italian tourist taking photos of the mountain's we've just climbed gives us a lift back to the Inn and we pick up the car.
A breathtaking day on a breathtaking ridge. The east end of the South Glenshiel Ridge - majestic. 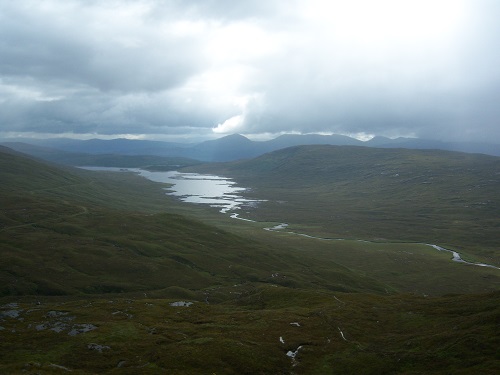 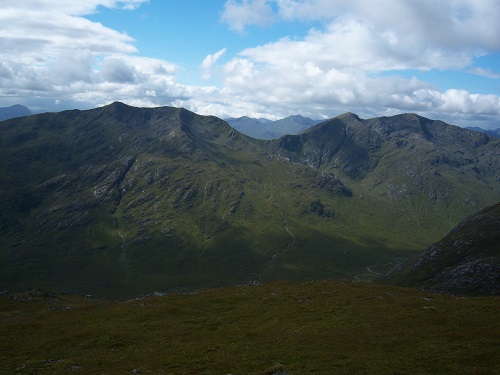 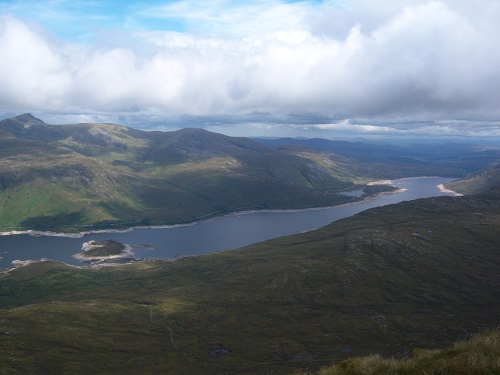 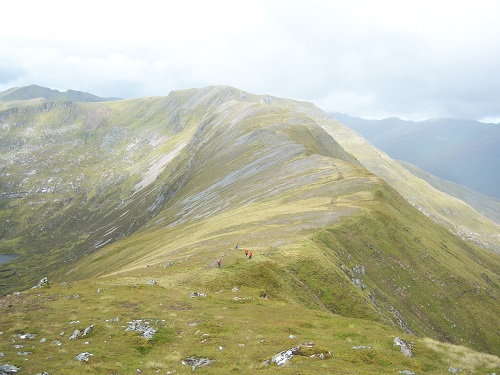 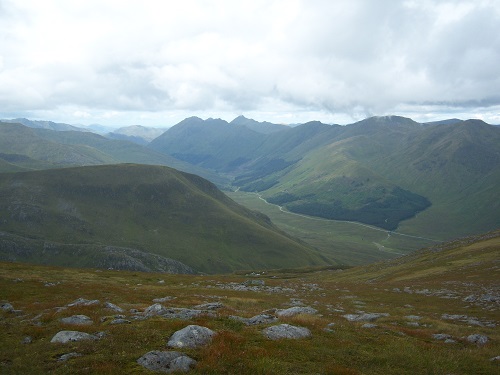 Glen Shiel towards the Five Sisters 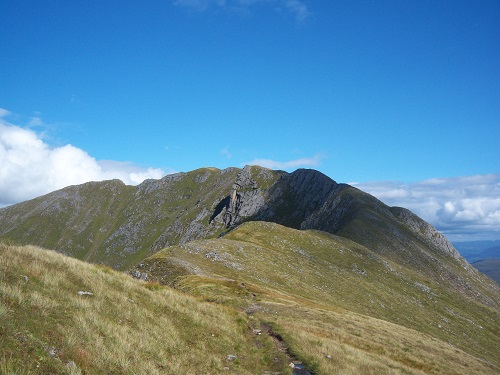 Aonach Air Critch from the approach to Maol Chinn-Dearg