The ridge between us

The ridge between us


This was the last day of summer hols and we wanted to finish on a high, so started looking for something to climb in the far north as weather was forecast to be best over Sutherland/Assynt. All that was left unclimbed north of Ullapool was Foinaven and a few Grahams. Leaving the White Fortress for a better day, we discussed different routes for the remaining Grahams and eventually decided on Beinn Tharsuinn. SMC book of Grahams suggests cycling along Loch Vaich and climbing this one and the neighbouring Meall a'Chuallie together, but I found Yorjick's report (thanks again!) describing the approach from Glen Calvie. We had been to this glen a few times before and climbed Carn Chuinneag twice, and we always fancied exploring the surrounding ridges. Now I knew we could throw in a Graham en route

The idea was to start from Glencalvie Lodge (small car park at the end of public road), walk to Diebidale and then climb Diebidale ridge, walk its length to Beinn Tharsuinn, returning over the parallel ridge, Leac Ghorm:

Track_BEINN THARSUINN ARDGAY.gpx Open full screen  NB: Walkhighlands is not responsible for the accuracy of gpx files in users posts
It's quite a long route as for single Graham and quick baggers will prefer the Loch Vaich approach, especially that one can add Meall a'Chuallie to the tally, but for us it's a local hill so we didn't mind a longer day. This area is known for stalking from early on in the season, so it's out of question in August - October.
Weather was so-so, with a chance of showers and patchy low cloud passing over, but some sunshine as well. The first 4 km are the same as for Corbett Carn Chuinneag, starting from Glencalvie Bridge: Alladale River from the bridge: Hmmm... a long way to go today! The track up Glen Calvie cane be cycled as far as Diebidale Lodge: Easy walking on a good track to start with, soon we reached a small wooden footbridge over Water of Glencalvie (4723857): 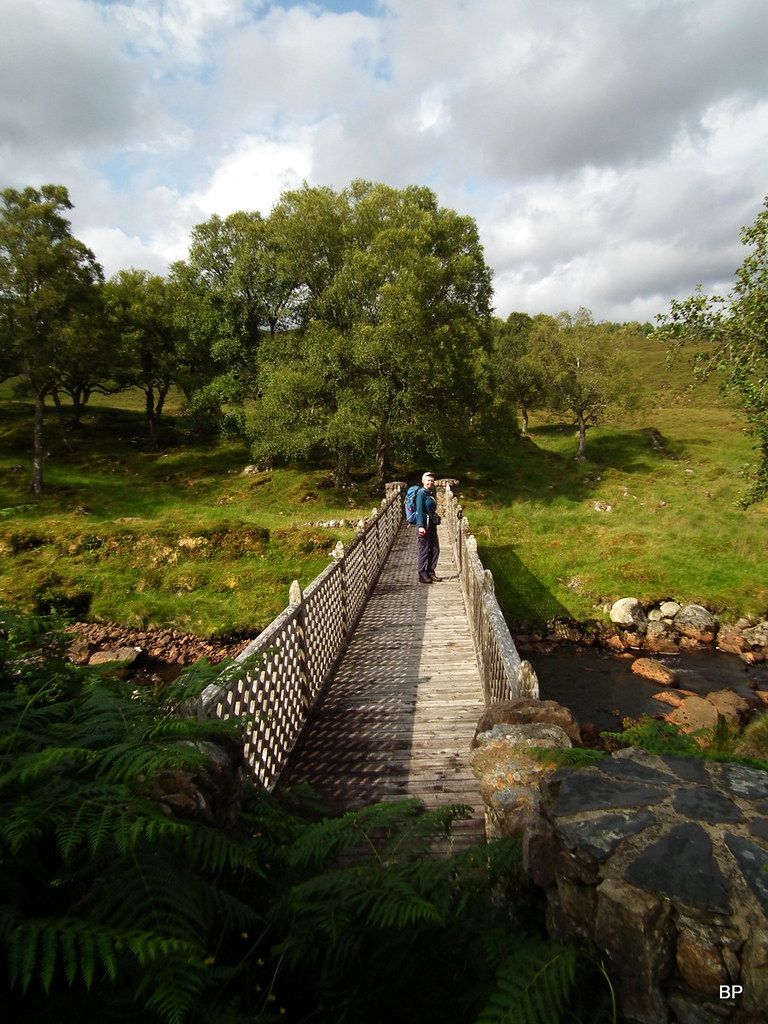 2017-07-22 beinn tharsuin ardgay 019 by Ewa Dalziel, on Flickr
On the other side, a grassy path leads to Diebidale Lodge, but we aimed across a boggy meadow straight up Diebidale Ridge. Going was easy, as soon as we began to gain height, the ground became drier, walking was pleasant on grass and short heather.
Diebidale Lodge and Carn Chuinneag:

After about 100m of ascent we spied an old stalkers path and followed it up: 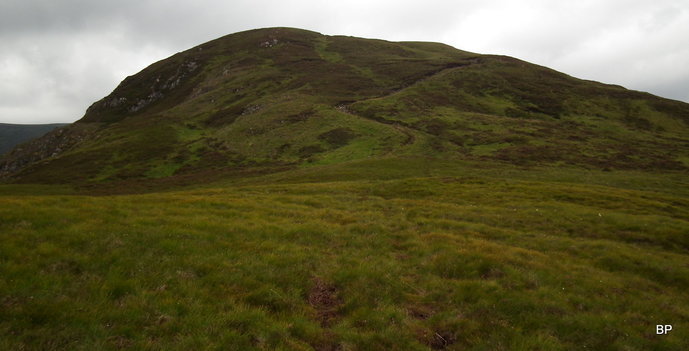 Diebidale ridge is so long! I couldn't believe, that from the eastern end, we couldn't actually see Beinn Tharsuinn on the horizon

There are some peat hags, but they can all be avoided by sticking to a vague ATV track along the whole length of the ridge, which we did. Our feet stayed dry. Thankfully, rain stayed away as well and low cloud didn't spoil the views too much: 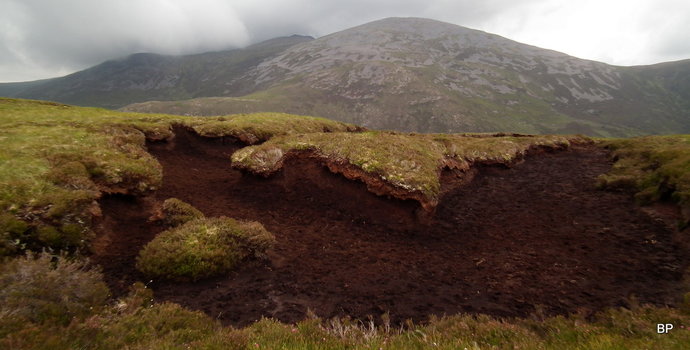 Looking back east along the ridge: 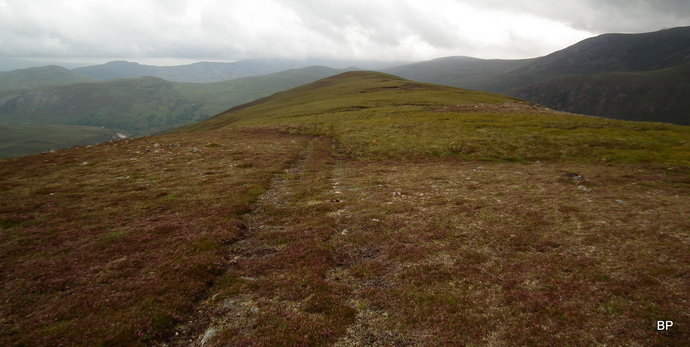 Beinn Tharsuinn is there somewhere... behind the lumps and bumps on the horizon!

Generally, it was very pleasant stroll along Diebidale ridge, a bit windy when cloud passed above us, but soon we reached the lower of the two highest tops (653m) which has a surprisingly large cairn:

After a short break, we traversed to the final top (686m) and from here we could at last see our target Graham!

Beinn Dearg seen through a gap in the cloud:

Looking back along the whole lenght of Diebidale Ridge, with Carn Chuinneag to the right hand side, reminding me of an exploding volcano:

Weather was deteriorating with more low cloud coming in as we pushed on to Beinn Tharsuinn. To reach the summit, it's about 100m drop and then 140m of re-ascent. Not much by numbers, but the terrain is quite peat haggy on the bealach.
Cloud coming in: 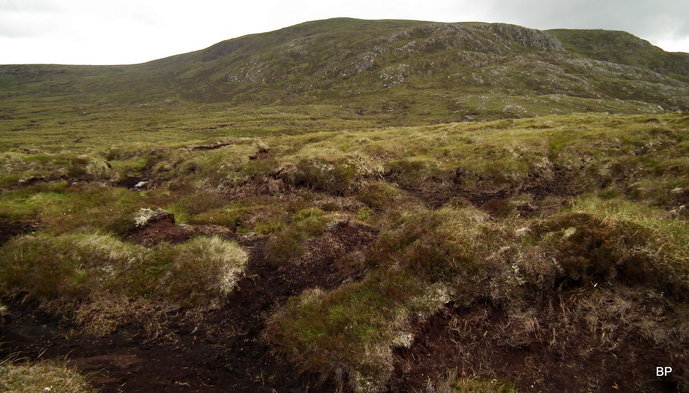 After some time of jumping, hopping and meandering in the labyrinth of peat hags, it was a relief to reach easier ground. From the distance, the Tharsuinn face looked very steep and rocky, but the distant appearance was misleading. There is absolutely nothing technical about this final climb. Just a bit bumpy and wet: 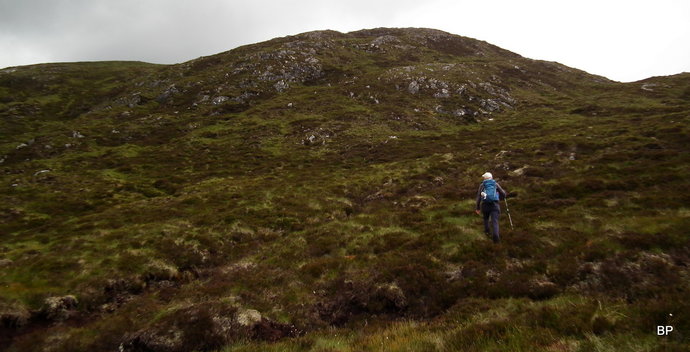 Looking down into the kingdom of peat hags and the 686m top:

We reached the summit without any adventures and celebrated our 81st Graham (Lucy's 47th): 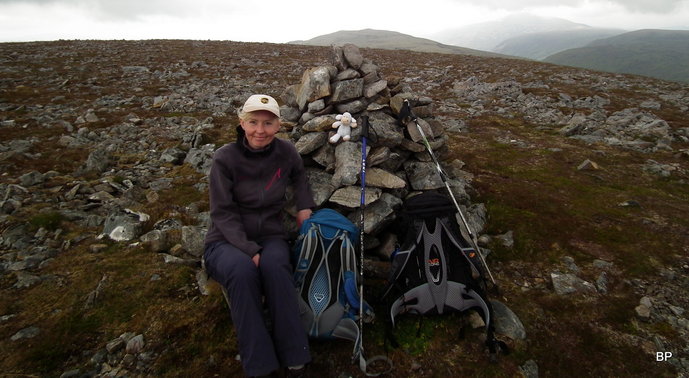 On a good day, distant panoramas would be tremendous, especially towards the "Assynt weirdos", but the low cloud meant views were somehow restricted, still we managed some interesting snaps while resting by the summit cairn. Conditions looked a bit scary, as if a storm was coming, but not a single drop of rain fell from the sky 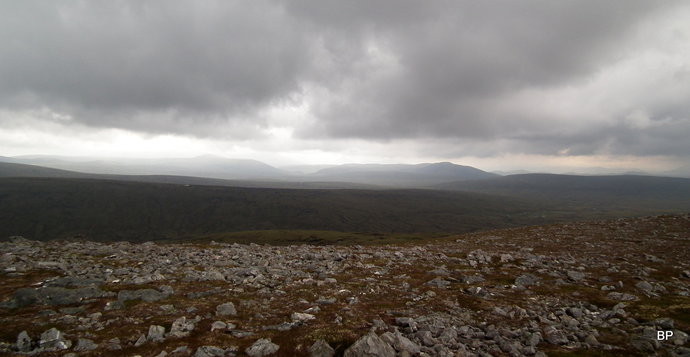 Back to Carn Chuinneag and "Armageddon" clouds: 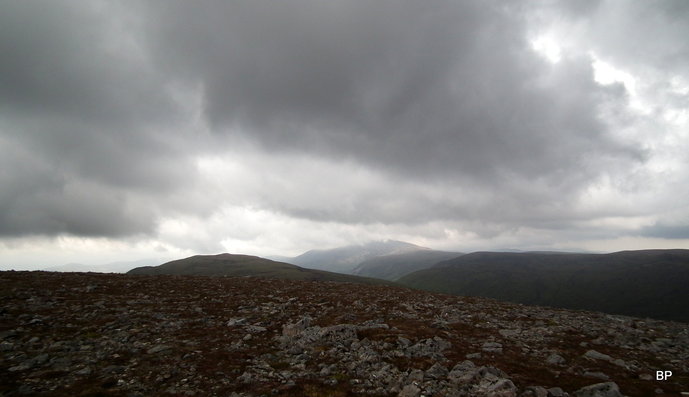 Having warmed up with some hot tea, we were ready to depart. It is possible to return the same way, but we opted for a more interesting return via the second ridge, Leac Ghorm. Technically, one could drop south to follow Diebidale River back to the lodge, but this option looked very wet and peat haggy and I don't know if there actually is a path in upper Glen Diebidale? One way or another, best to keep to the higher ground for the return route, if only to enjoy views for longer - which we did

So from the summit we aimed due north to descend to another bealach. To our left, we could see the remote Loch Sgeireach:

A patch of fog lingered in the bealach... The second ridge is there, somewhere:

The peat hags on the second col can be easily avoided to the right, and the climb to Dunan Liath is only another 100m of ascent on grassy ground. Thee cloud has lifted eventually...
Panoramic view back to Beinn Tharsuinn and the col:

The large cairn on Dunan Liath is not placed on the highest point of the ridge, but we didn't mind. We're not really into bagging Humps and Tumps 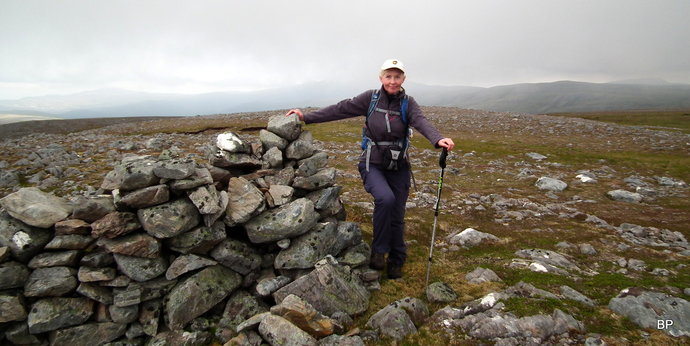 Weather was improving now, more sunshine came through as we walked along the wide ridge, over stones and heather. I imagined how superb this area must look in early September, when the heather is in full bloom 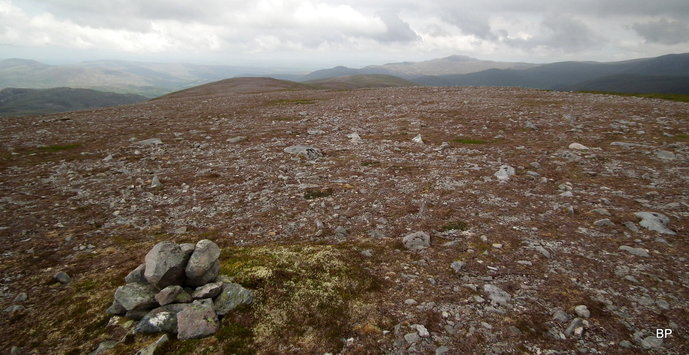 I spotted a familiar shape to the north - another local Graham, Carn a'Choin Deirg. We had suffered a bad washout on this one last year, must come back and repeat it in better conditions:

Looking back to Beinn Tharsuinn:

Panoramic view of the parallel Diebidale Ridge and the glen in between:

The hills are alive...with the sound of meowing!

We followed the ridge to the final top, Dunach Liath (551m). From here, there was a good view back to the route we walked. Kevin spent some time wandering around taking panoramic pictures as conditions were excellent now:

Carn Chuinneag - sunny for a change:

To join the outward route, we dropped into the glen down the grassy slopes, aiming to be east of a small plantation. We disturbed a large herd deer grazing nearby, they raised heads and watched us with some interest:

The descent route. To the very left, the track returning to Diebidale Lodge can be seen: 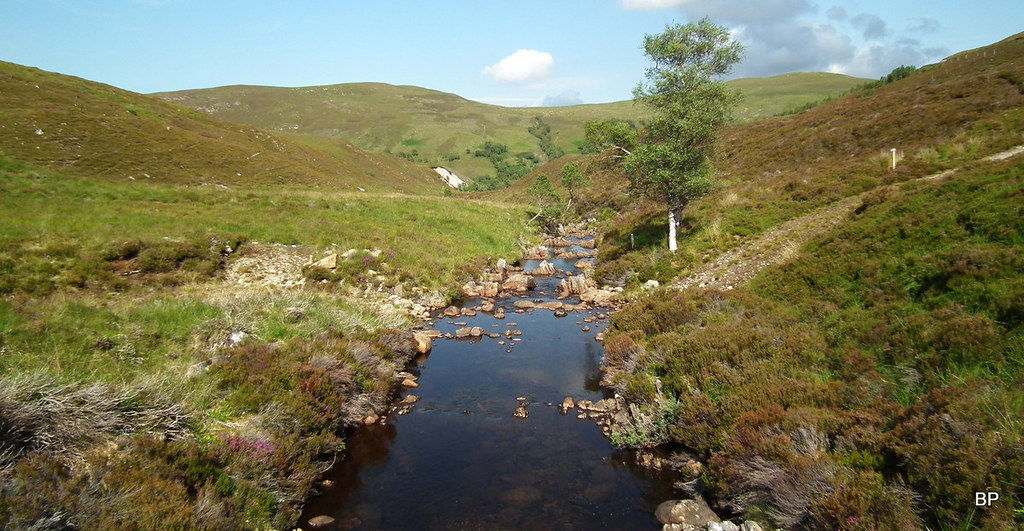 2017-07-22 beinn tharsuin ardgay 244 by Ewa Dalziel, on Flickr
After a short climb up the track, we cut down across the meadow to reach the wooden footbridge and soon we were back on the main track in Glen Calvie. The final 4km of walk back to the car was pure pleasure... OK, there were a few clegs about

Such a lovely afternoon:

2017-07-22 beinn tharsuin ardgay 261 by Ewa Dalziel, on Flickr
The whole circuit covers over 25km and some might consider it not worth the hassle for the sake of bagging only one Graham, but it's a very nice area and the two ridges are a delightful combination of high level strolling and peat hag jumping

Highly recommended if you want to explore this corner of northern Sotland a bit more. Good for seeking solitude - we didn't see a soul all day (deer and clegs don't count).
.........
My next story will describe a nice Corbett which is usually a sidekick to its more famous Munro neighbour, but it's a superb shorter walk when done on its own. Report to follow

Re: The ridge between us

That looks a good route, BP. I did Carn Chuinneag from that start point a few days before we were respectively on Foinaven and Arkle. The Diebidale Ridge did attract my attention on my walk along the glen, and I wondered if it was a route some walkers might fancy taking on. Clearly it is!

Re: The ridge between us

You've had me reaching for the map again! Nice one, look like there are some great views to wild places.