I had a Plan, and Sunday was originally set aside for going down to Sligachan and having a look at the Cuillins close up - but with the higher hills in cloud and the lower hills clear, it seemed to make more sense to do the Storr on Sunday and Sligachan on Monday, even if that meant I wouldn't get nearly as much time on the Trotternish ridge - especially as I'd missed the 9am bus north by the time I made the decision and had to wait for the 11.50, the only other bus on a Sunday. That did at least give me time to prowl around Portree, and admire the view of the Storr from the Lump. The Storr from Portree

Earlier in the week there had been warnings that Skye was so full that no one else could come in, and it did look like that at the Storr car park - the lines of people climbing up to the Old Man reminded me of pictures of pilgrimages elsewhere! The start of the climb is a good broad zigzag path, but pretty steep - and with a real mix of people climbing. Most of them took the left hand fork, at least.

The cliffs tower impressively overhead, but as the walk description says, it's quite difficult to pick the Old Man out from the background. The view the other way wasn't as dramatic, but still quite good - over Loch Leathan and the edge of Skye and the Sound of Raasay back to Dun Caan where I'd been the day before. At a fence and gate the path suddenly stopped being very good and became very bad, muddy and eroded - or more accurately lots of bad paths spread out all over the place. I took the slightly quieter one which led up past the Old Man, partly because it looked interesting and partly because I'd misremembered the instructions again. I can't say that I can see why all the fuss is about the Old Man - it's a very big and relatively pointy lump, but still essentially a lump. Needle rock, with its points and holes and flying buttresses, impressed me far more. They did look pretty good posing together, though, it has to be said! There was no warning sign on my way in, so I didn't know that I wasn't supposed to be there until I was out - but in any case I really felt more endangered walking along under the escarpment at Loch na Mna on Raasay. Because I was on slightly the wrong path I hit the fence a bit above the stile and had to make my way down - I had thought I would have left the crowds behind by now, but there was a lot of people not far behind me making for a little top which was a viewing point, and more people than I expected apparently heading for the Grahams.

After one small scramble place fairly early on, this next section of the walk was just a long walk, round the great bowl of the corrie, with the cliffs below and another row of outcrops above. 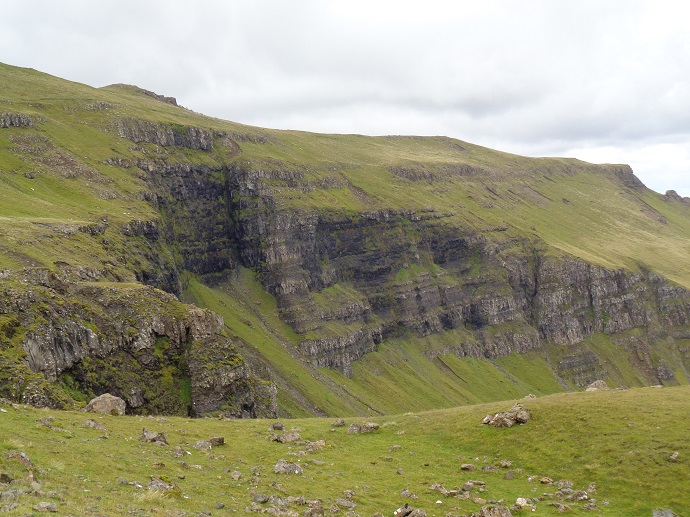 I think I turned up the slope slightly too late, as it had been grass for a while before I stopped walking intently forwards and remembered where I was supposed to be going next, but that didn't really matter - it just meant that my path could slope a bit back rather than heading straight up.

The ridge of the hill was a broad place scattered with stony patches, and with a great view right along the main Trotternish ridge, and I found a comfortable rock to sit down and eat lunch before climbing on again. Climbing to the summit

My climbing was slightly distracted by an unmistakable Eaval rising from the sea beyond Hartaval - I'd been looking so much south and east, back to the mainland, in Sleat and Raasay that I'd forgotten how far north I'd come - and I always forget how close the outer isles are to the north of Skye. The more dramatic parts of South Uist were hiding behind MacLeod's Tables, and of Harris behind the Trotternish ridge, but those odd heights of North Uist are my favourites to look at anyway. (It did mean that I was walking to 'I survive the childhood universe and I step the naked heath...' for quite a while afterwards, though.) 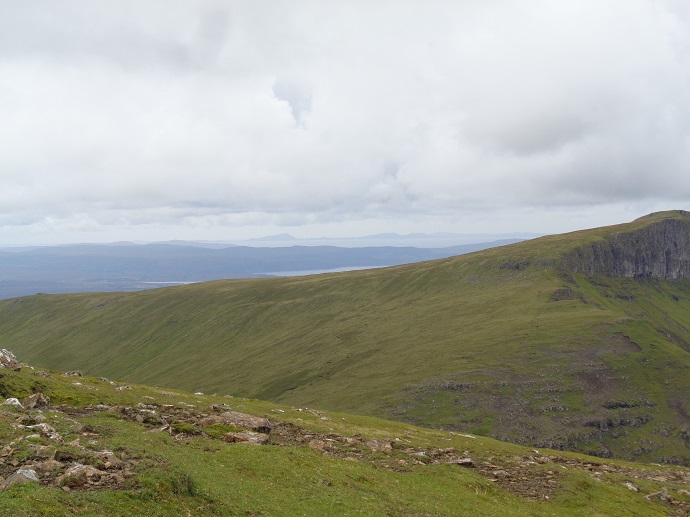 The top of the hill was very different from the view from below, a great smooth grass slope leading up to the cairn and trig point. 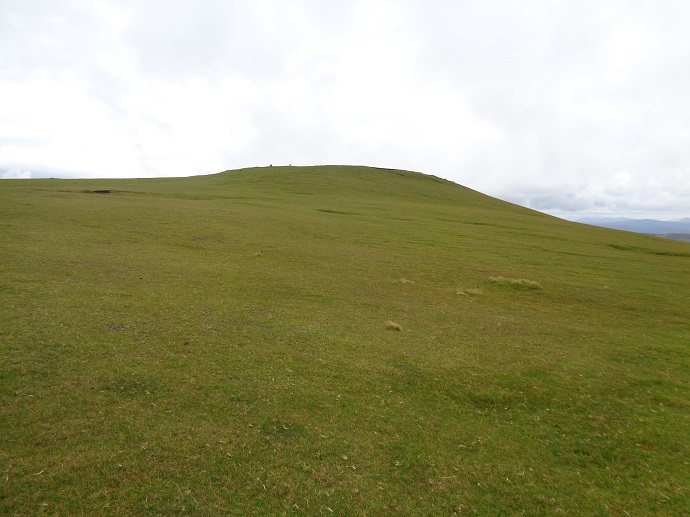 This trig point wasn't one of the usual round island ones, but the kind built up out of stones - although, like one of the Pentland ones, it looked as if Something had been nibbling on it... The views were hazy but stunning, especially looking south to the start of the Trotternish ridge, and over the lochs by the road to the hills in the south of the island. The highest point is on the smooth slope, a bit back from the edge, but a path led down to a viewpoint of a much more dramatic top, which I was really glad wasn't the summit! 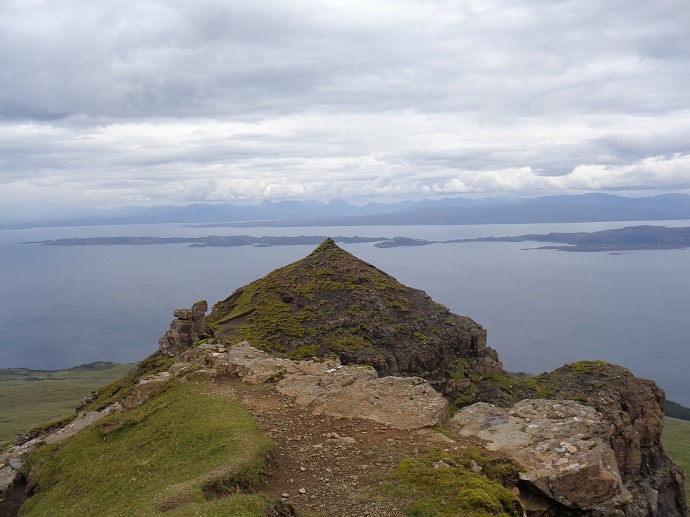 I decided to head straight for the bealach, rather than back the way I'd come - it was a lovely smooth easy slope at first, and although I couldn't see the bottom as it curved away, I thought that if I did meet small crags I could probably dodge them without a huge detour. And it turned out fine, with only the usual patches of stones, except that the very bottom part was steep and slippery and therefore slow, as I zigzagged down cautiously.

Straight up the other side was a bit of a hard pull for a while, in and out of stony places sometimes with traces of path and sometimes without, and with no sign of how much further there was to go, until I suddenly came out on the flatter upper part which reminded me a bit of the climb to the trig point on Dun Da Ghaoithe. The faint traces of path I'd sometimes been following and another faint path which followed a line of fence posts joined here to make a much clearer path which led along the edge of the corrie to the summit. I had meant to go on along the ridge as far as Beinn Edra, but with the late start and the slow passage through the bealach I wasn't at all sure that I wouldn't miss the last bus at that end -and although I'd had a back up plan of retreating from the Storr back to the road for the one bus of the day back to Portree, by now I was sure that I would miss that one. But more or less as I reached the summit, cloud and rain suddenly swept around me from where they'd been lurking on the hills to the south west, and I decided that this wasn't a day for going any further - and that if I was going to miss a bus, better to do it at the busy Storr car park within reach of Portree than at the other end of the peninsula.

Coming back I followed the line of the fenceposts - a less direct route, but easier ground for descent - and took a slanting route up across the back of the Storr ridge, aiming more or less for where I'd hit it originally. The first patch of cloud cleared quite quickly, but it wasn't long before it was followed by more, so I knew I'd made the right decision. Clouds in the bealach

I came down as quickly as I could, since I just had a chance of making the bus if I made good time - but I'd forgotten just how awful the paths around the Old Man were, with no chance of making anything but very bad time there especially now they were wet with new rain, and I missed the bus by about 15 minutes. However, I picked up a lift back into Portree somewhere along the side of the lochs, so it wasn't too bad.

Users browsing this forum: Am Basteir and 53 guests