This whole thing was James's idea - he contacted me through Scottishhills and suggested the round. I had been toying with the idea for about 10 years now - either as an overnighter or (much less likely) a very long day, but having been over nearly all the sections of ridge on it before, I always found something else to do. Seemed like the time was now!


map 1.gpx Open full screen  NB: Walkhighlands is not responsible for the accuracy of gpx files in users posts
James flew up from Bristol on the Thursday afternoon and we set off for Glen Cannich the following morning, the weather forecast so far throwing all the rain it had promised at us. A couple of hours of drinking tea in the café in Cannich allowed things to ease off a bit, and by the time we had parked up under the Mullardoch dam, we could see most of the summits we planned to go up. At 11:30, we headed round to the southern end of the dam and found our way up through the bog (vague trodden way and stiles over the deer fences) to the Allt Fraoch-choire. 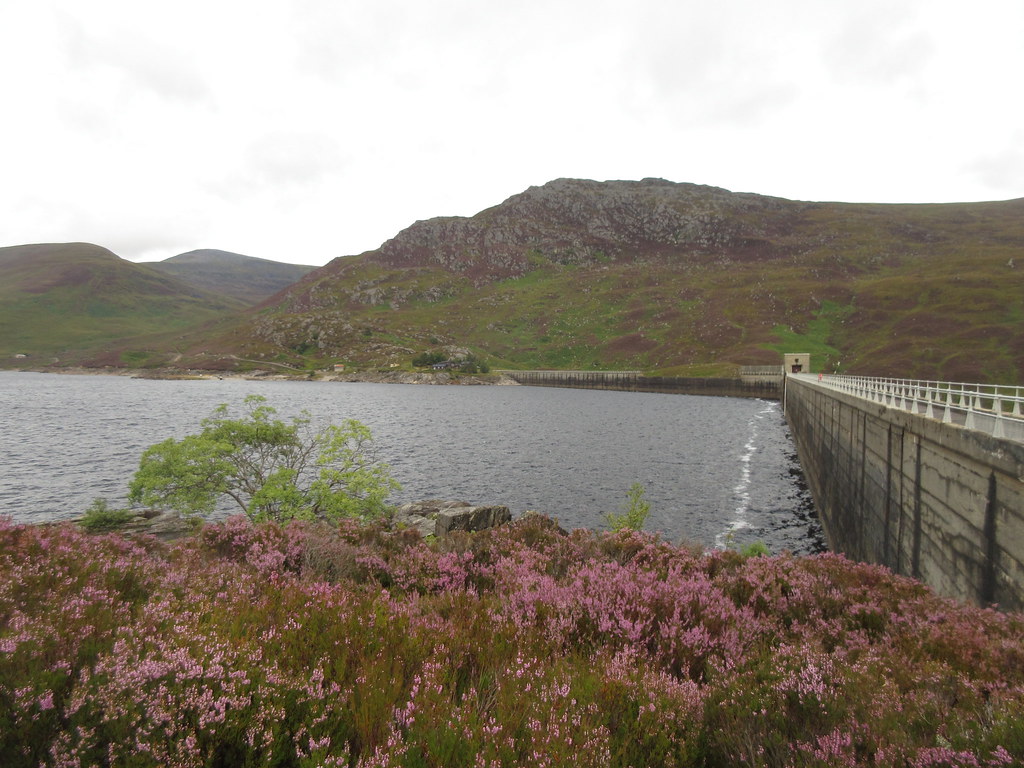 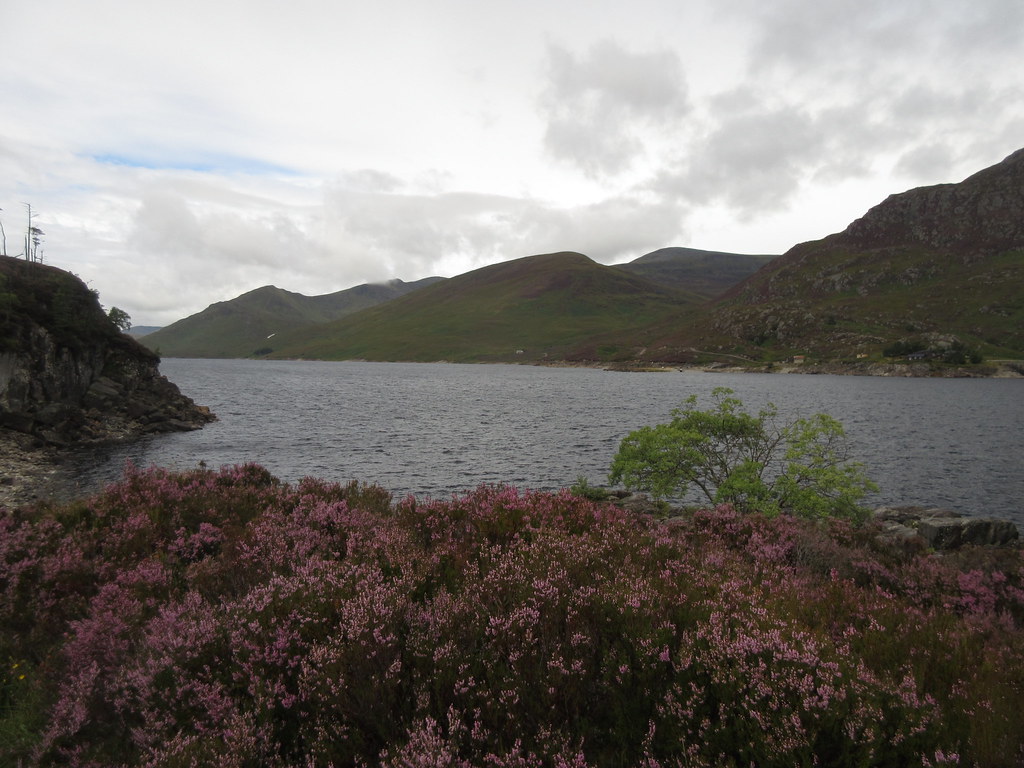 Loch Mullardoch from the south side of the dam 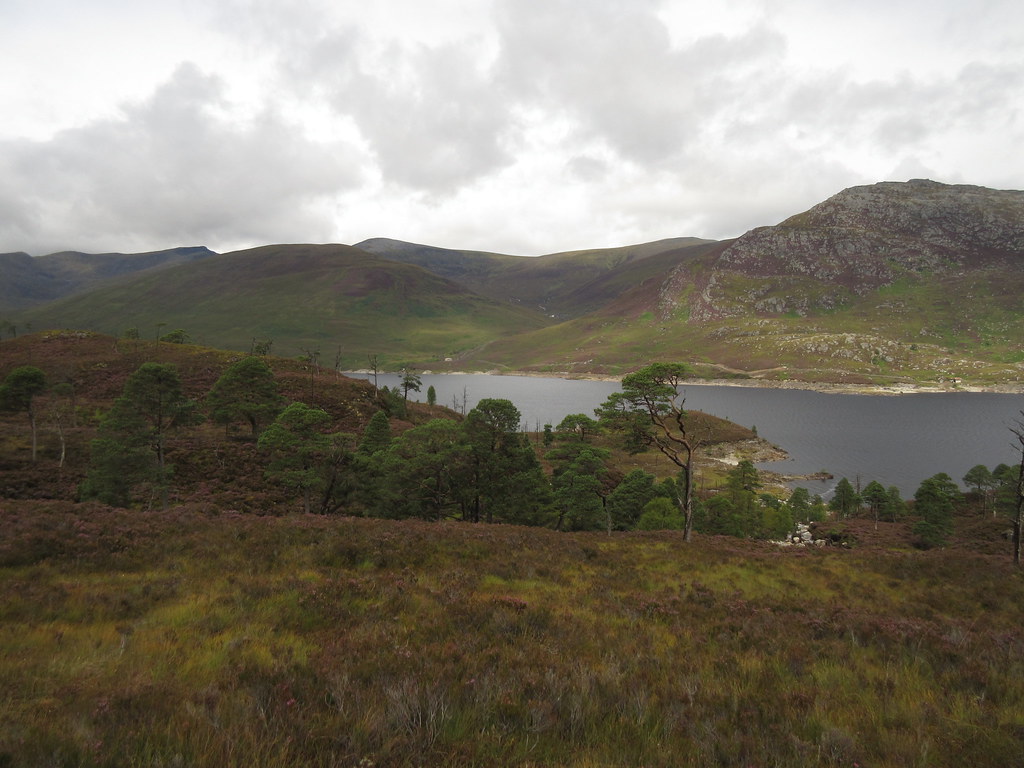 Looking across to Creag Feusag

In my head I had always assumed we would go the other way round but we hadn't actually discussed it until about 30 minutes earlier on the drive up the glen. James fancied a clockwise round, which seemed reasonable enough. To be honest, when it comes to circular walks I quite like changing my mind about the direction at the last minute.

Crossing the Allt Fraoch-choire was probably going to be the most awkward crossing of the loop, but although it took a bit of searching to find a sensible place, it wasn't that bad. There was certainly more water in the burns than normal though! 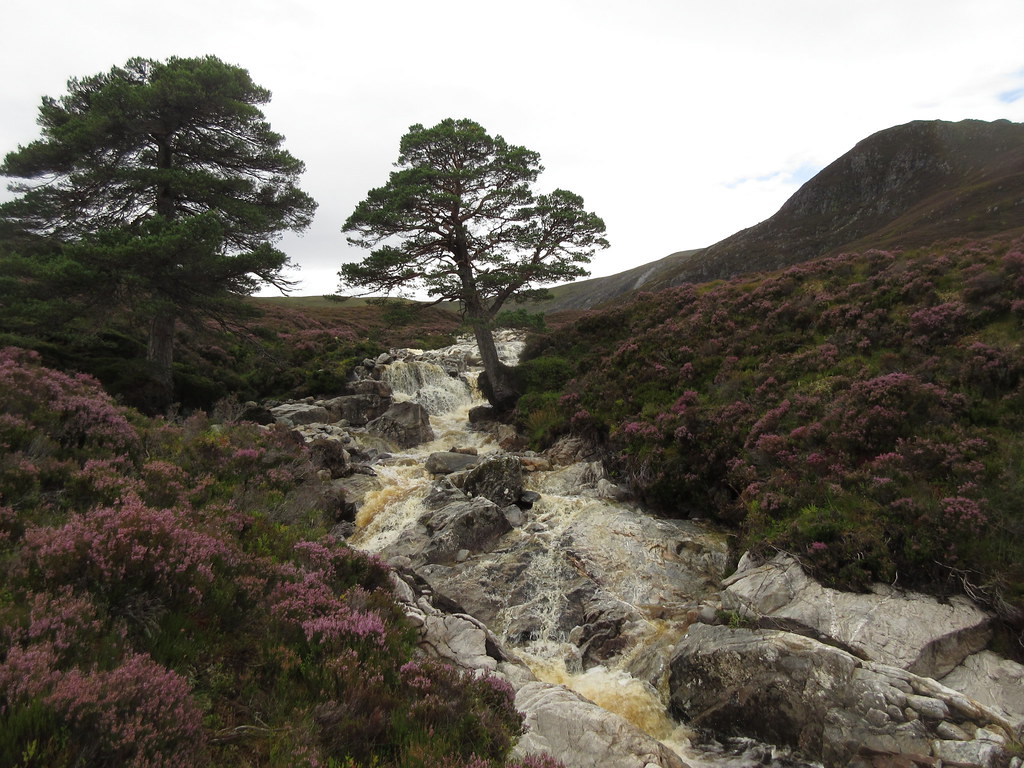 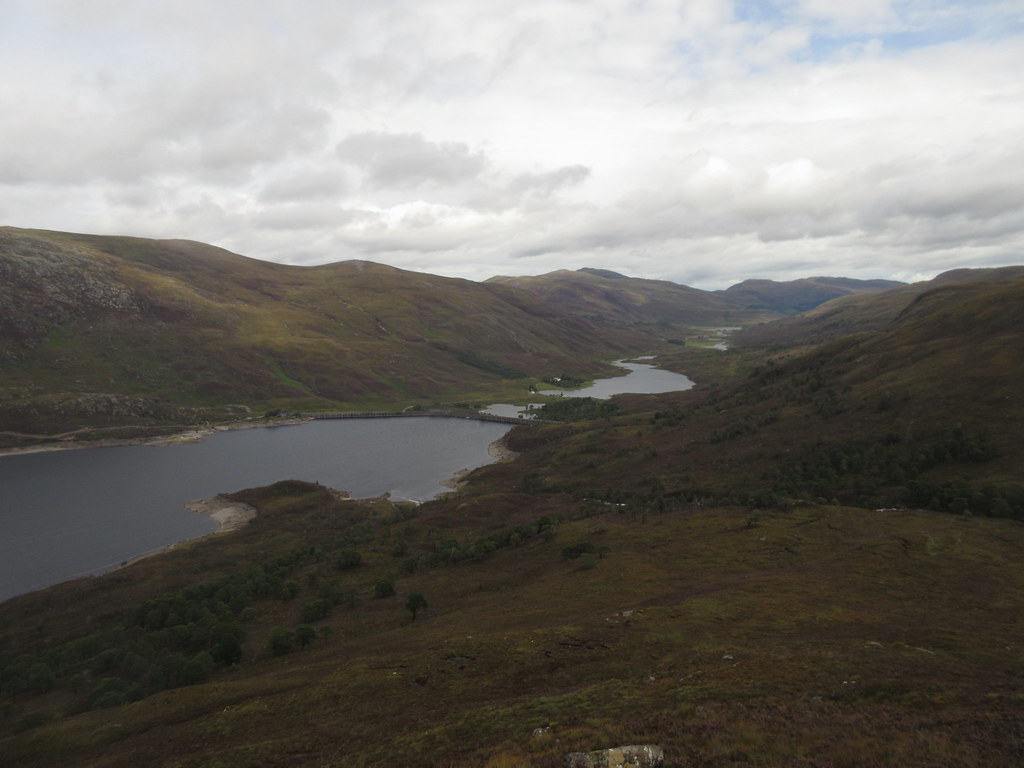 Back to Glen Cannich

After a heathery pull onto Creag a' Bhaca, the going suddenly became easy underfoot, and there was a distinctly autumnal feel in the air - the colours were almost there too. We raced the clag to the summit of Toll Creagach and managed to beat it. After that, the going onto Tom a' Choinnich was wetter and cloudier. 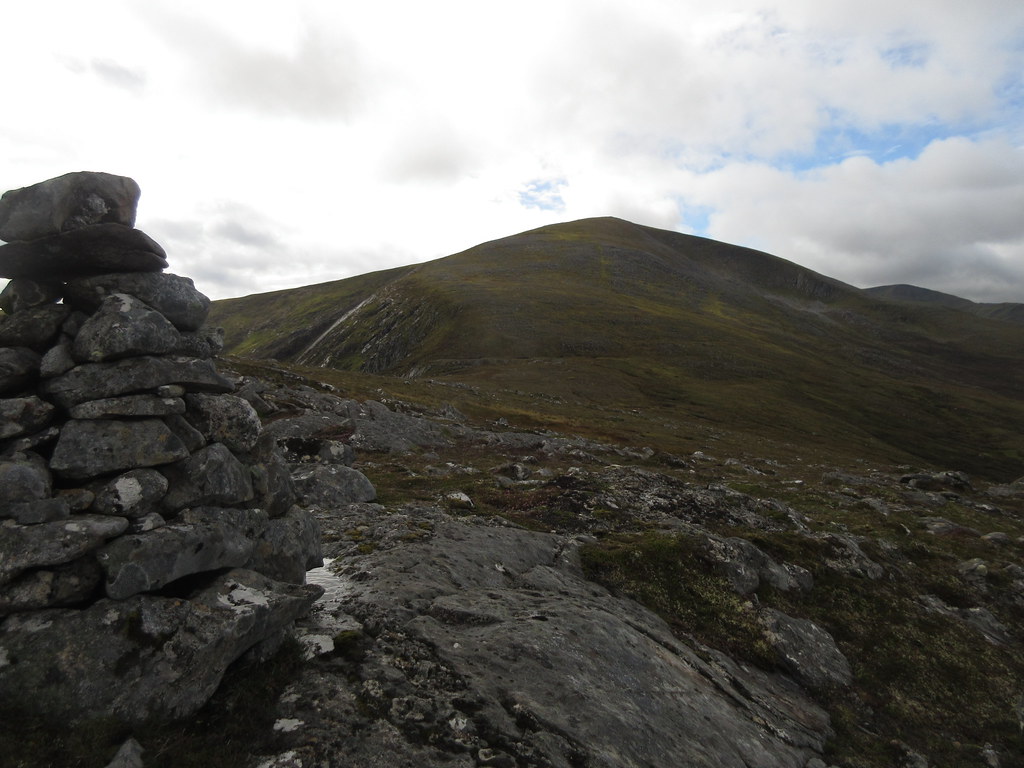 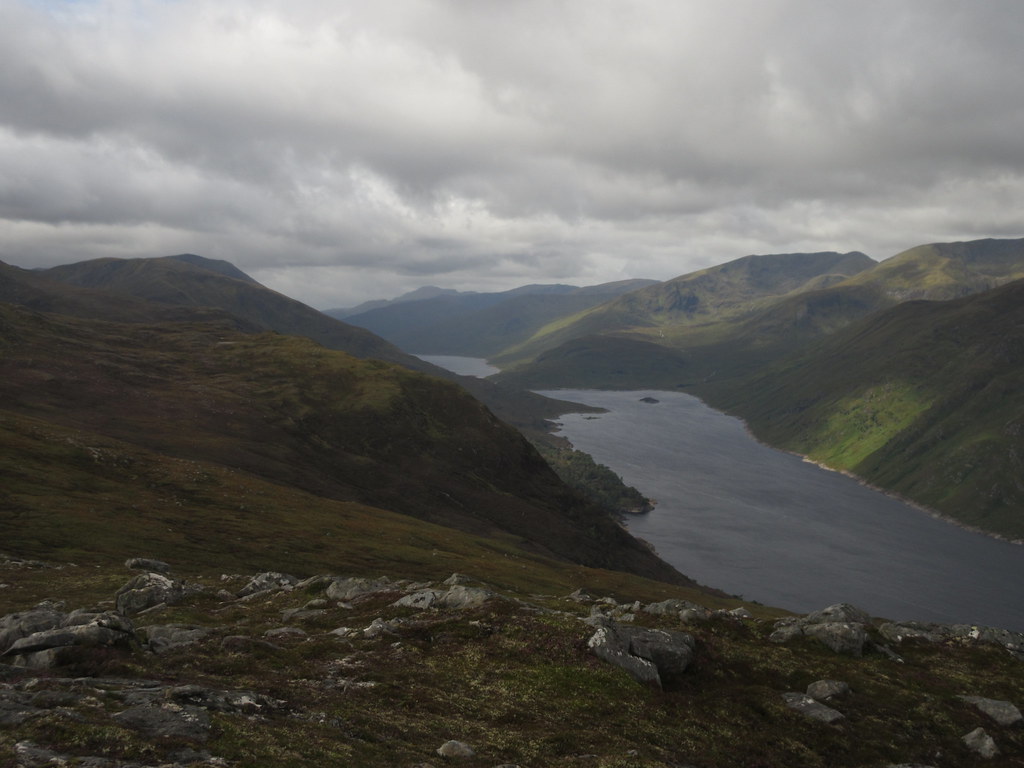 Down the loch to An Socach 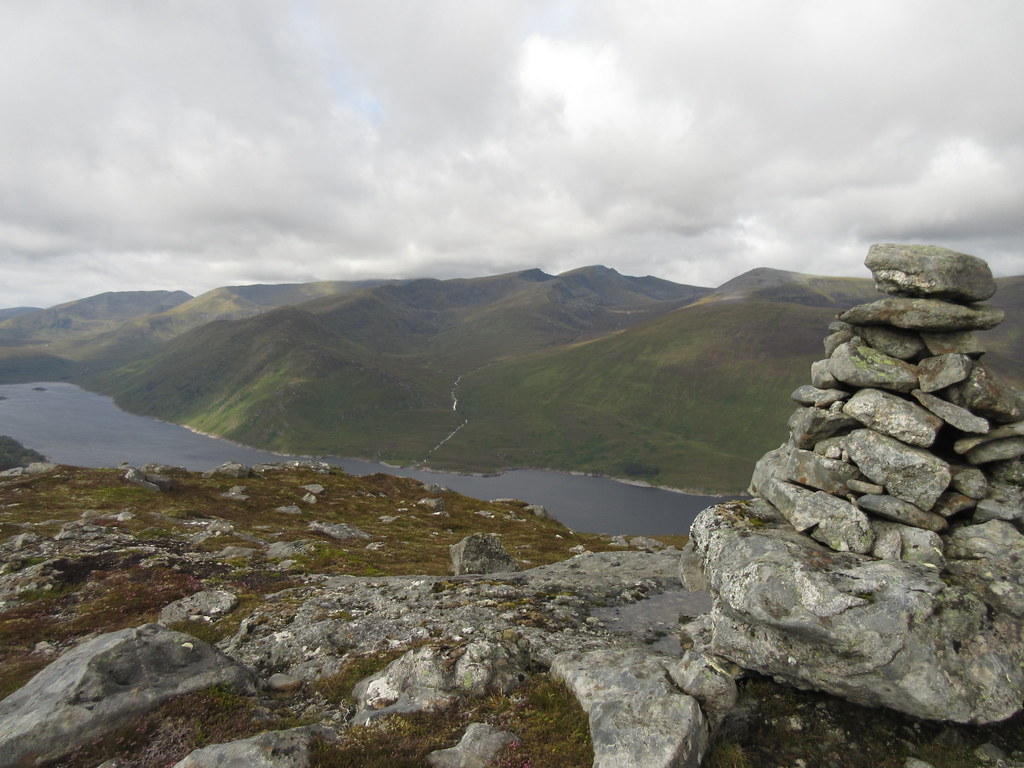 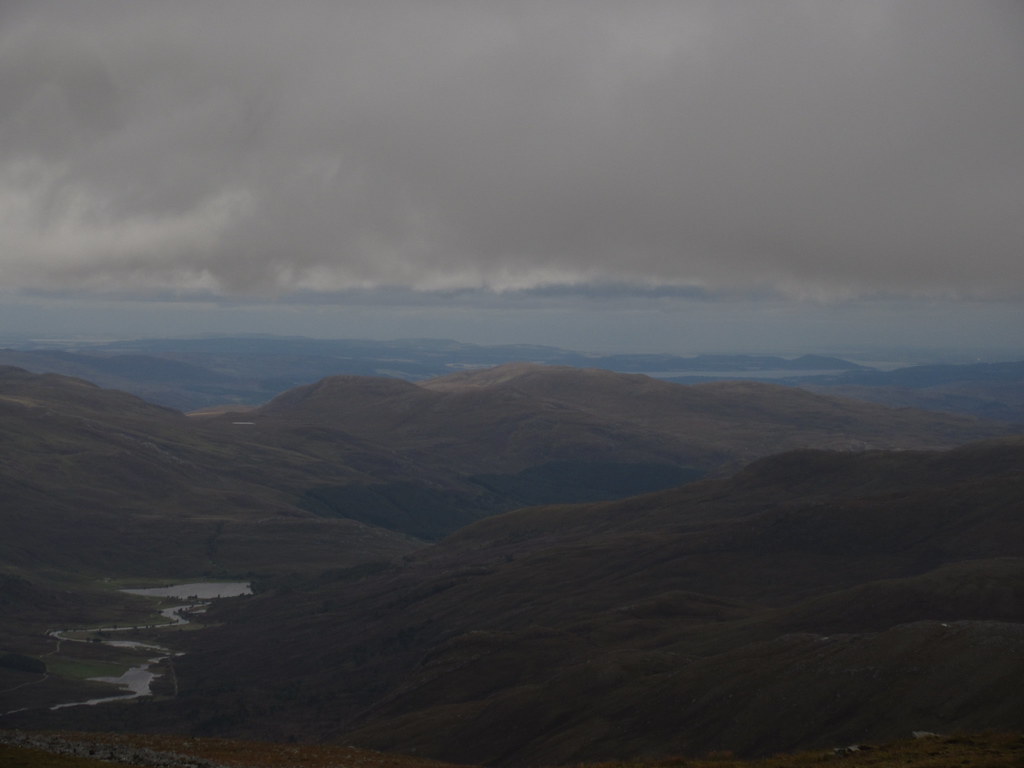 A glimpse of the Beauly Firth and Inverness

Beyond Tom a' Choinnich to the Stob Coire Dhomhnuill pinnacles was a section of ridge I hadn't been over. Although the weather was quite blustery and in/out of the cloud, I enjoyed it, and will need to do it again. Also I finally found the constructed steps on the ridge up to Sron Garbh that I remember being mentioned in a Ralph Storer guidebook years ago. They are a bit the worse for wear these days, partially collapsing into the scree in places. 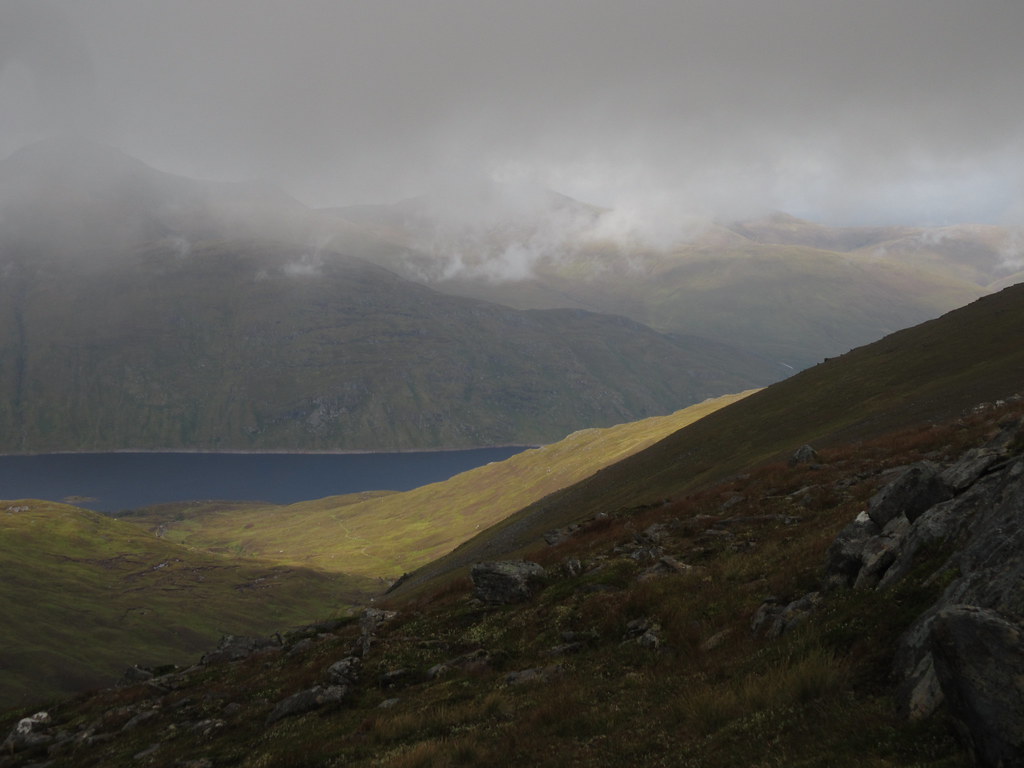 Spot of sun and Loch Mullardoch

The rain came on more heavily as we crossed the pinnacles, making them a slippery thing to get past as straightforwardly as possible rather than the fun they should have been, but after crossing Carn Eighe and descending towards Beinn Fhionnlaidh, we were treated to a reasonable clearing of clag and even some brief sunshine. We dumped sacks and raced up Beinn Fhionnlaidh, again just beating the cloud, but not completely. 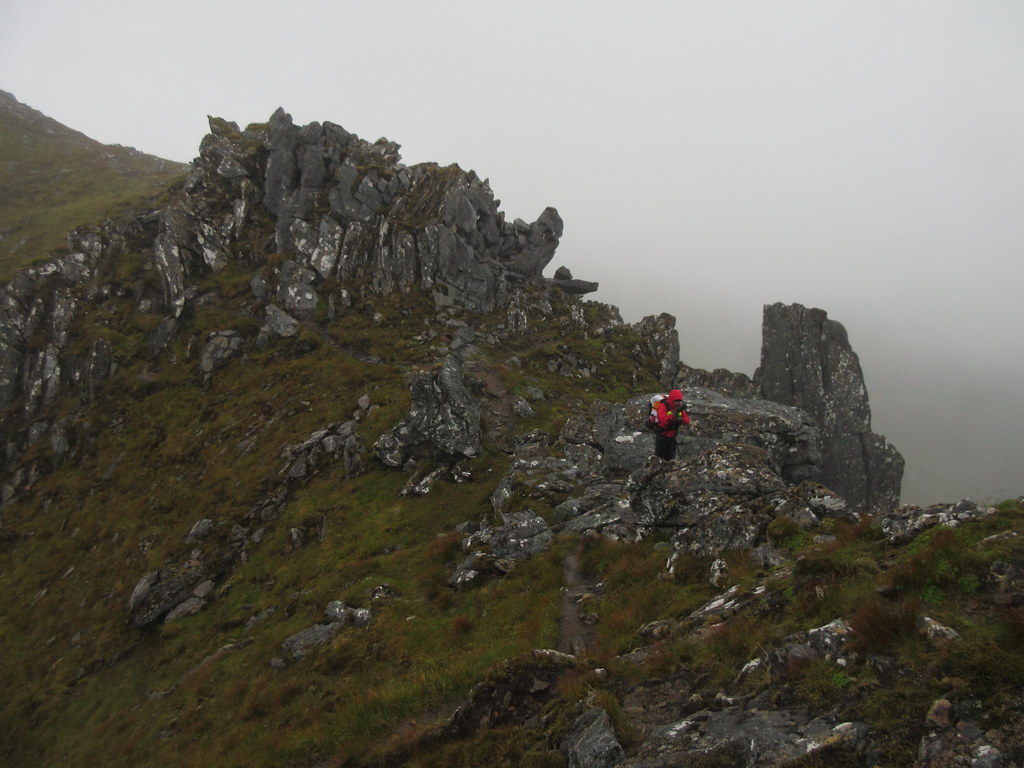 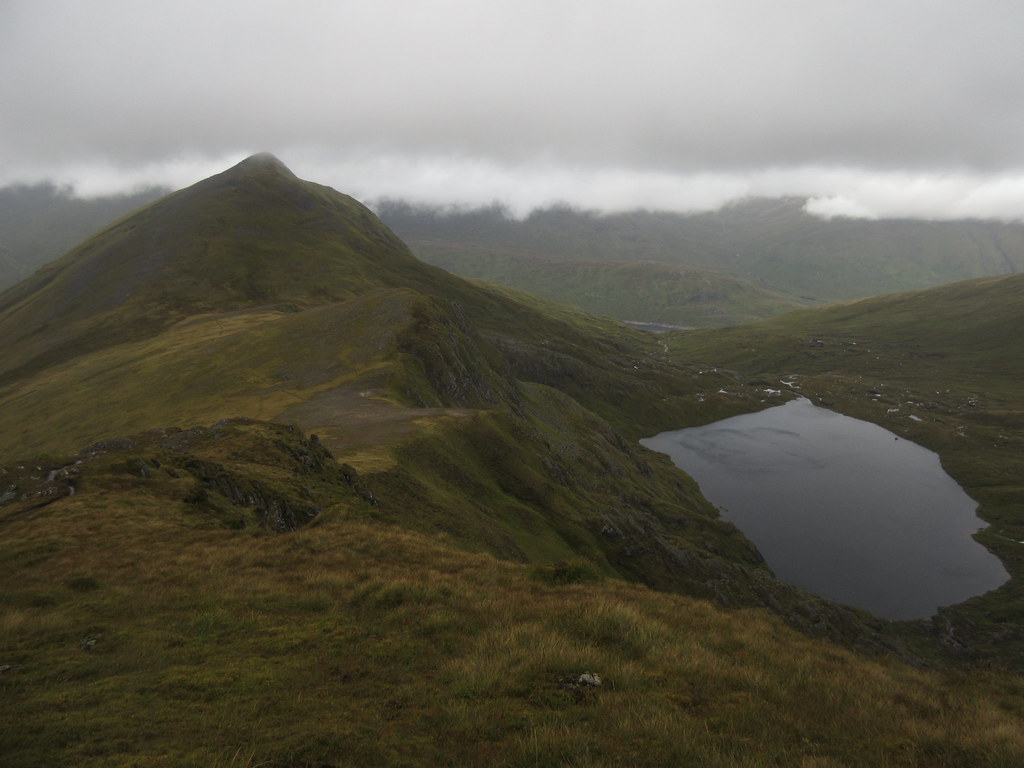 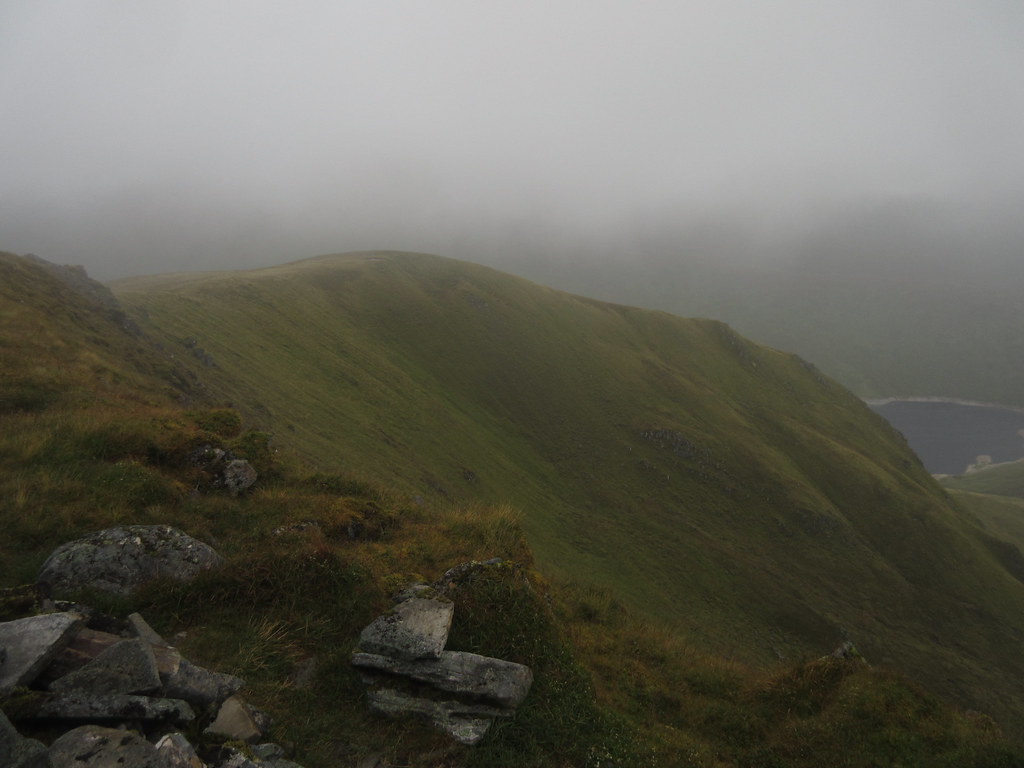 It was getting on a bit now, and time to find somewhere to pitch up for the night. We had Coire Leachavie in mind as it was definitely not a night to be on the summits. I was sure I had contoured round Carn Eighe before (this being my third visit to Beinn Fhionnlaidh), but it didn't ring any bells. The path which led us off in the direction of the col above Lochan Uaine soon petered out, and we were left sliding about on scree in the cloud again. In the end we came out on Carn Eighe a little above the col - better to end up too high than be contouring endlessly round the back of Mam Sodhail. On Mam Sodhail, the weather really turned to crap, and any thoughts of a last bit of sunshine to dry us off before camping disappeared.

We soon found the good stalkers path into Coire Leachcavie. We had to drop a good 170m down this before finding anything flat enough to camp on - unfortunate as the most sheltered section was immediately under the lip. We put the tents up on opposite sides of a burn, and followed up with a rather antisocial evening. The rain was back on with strong gusts now, so we both retreated to our tents (where it was too noisy for conversation) and went to bed. I heated up some couscous but wasn't too keen to have my stove on too long inside the tent.

Initially, my concern was that the burn would flood the tent as it didn't stop raining earlier in the night, but eventually it did, leaving us with gusty squalls. After a couple of t-shirt/barefoot runs around the tent to tighten guy-lines and replace pegs, a particularly strong gust hit and the tent didn't bounce back up afterwards. Bugger!

One of my poles (which had had some previous abuse to be fair) had snapped, and most of the tent was now lying on my face. I managed to repair the pole with a spare tent peg broken in half and inserted, but another gust soon destroyed that, and I had to settle for a shorter hoop and lots of wet, flapping material. Lovely, but I eventually got comfortable enough to doze as daylight finally started to appear.

At this point I knew a second night out wouldn't be a great plan, but I thought we could carry on with the Sgurr nan Ceathreamhnan range then walk out along the northern shore of Loch Mullardoch. However the squalling gusts had only strengthened overnight, and returning to the ridge in the morning seemed foolish. James had had a better night, the wind had even managed to bend his walking pole (which acts as the central support to his tent)!


map 2.gpx Open full screen  NB: Walkhighlands is not responsible for the accuracy of gpx files in users posts 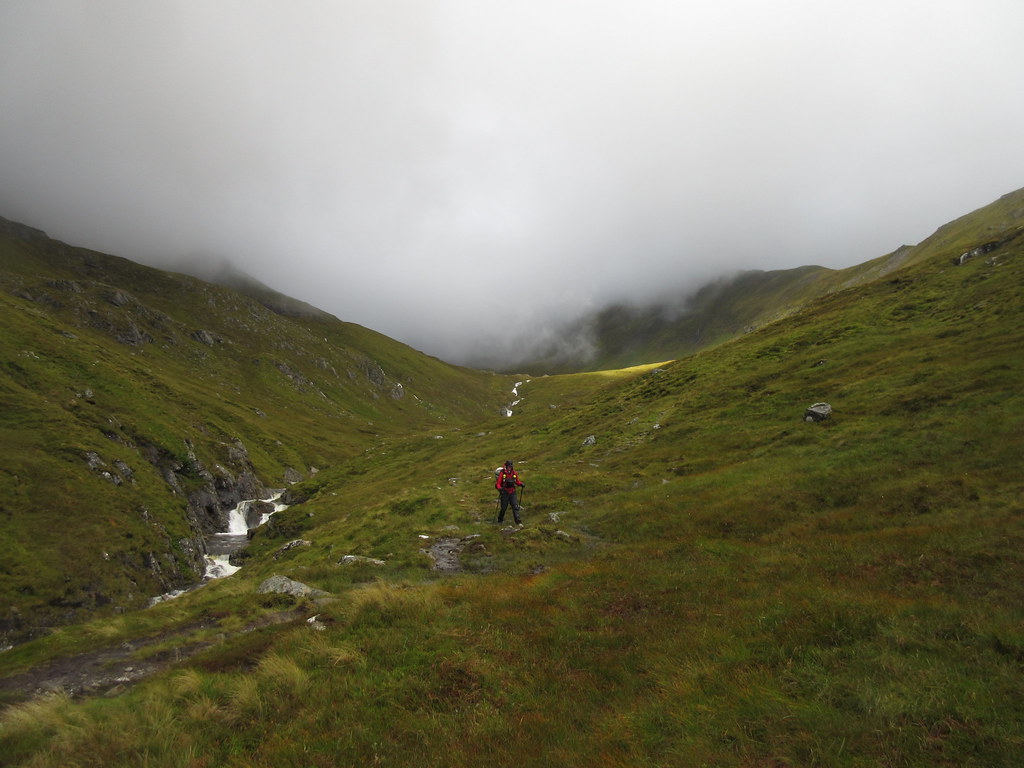 Instead we decided to descend to Glen Affric and find our way back over the ridge later in the day - perhaps the wind would drop a bit. Despite the poor weather, there were short bursts of impressive sunshine, although each one was sandwiched between heavy showers. 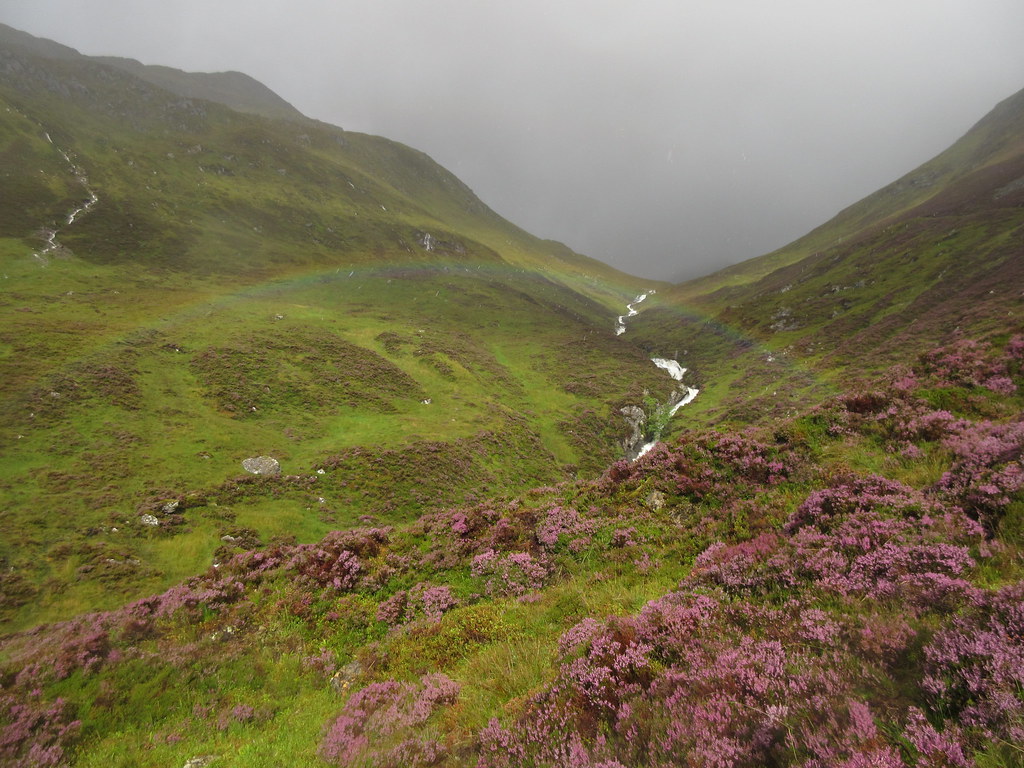 Down at Loch Affric, we were no longer the only people around, and the midges were also out in force. A stop for a brew at the car park was the worst I've known them this year (fortunately my first really bad encounter with them so far this summer). On the upside, the views along the side of Loch Affric were more spectacular than usual in the constantly changing weather. 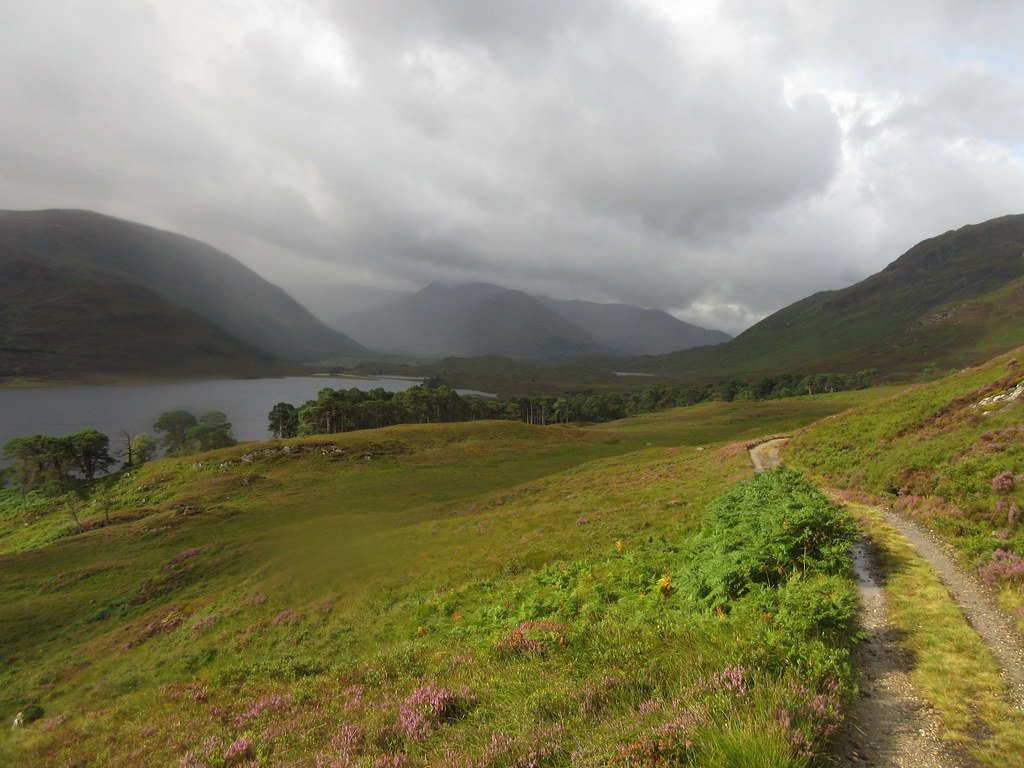 We decided to head for the Allt na h-Imrich to take us back over to the Mullardoch dam. Walking down the road, my lack of sleep was catching up with me and I was actually dozing off as I walked, my eyelids constantly drooping downwards before I meandered across the road and surprised myself awake again

. The steep pull up next to the burn soon woke me up properly though, and was one of those nice paths that I wondered why I had never got around to going up before.

Out of the woods, we had just decided to start bashing upwards through the heather when we met a stalker on a quad bike (deer attached as well). We thought he might tell us to stick to the path, but he was done for the day, and pointed out the line of an old pony path not shown on the map which led over to Glen Cannich. 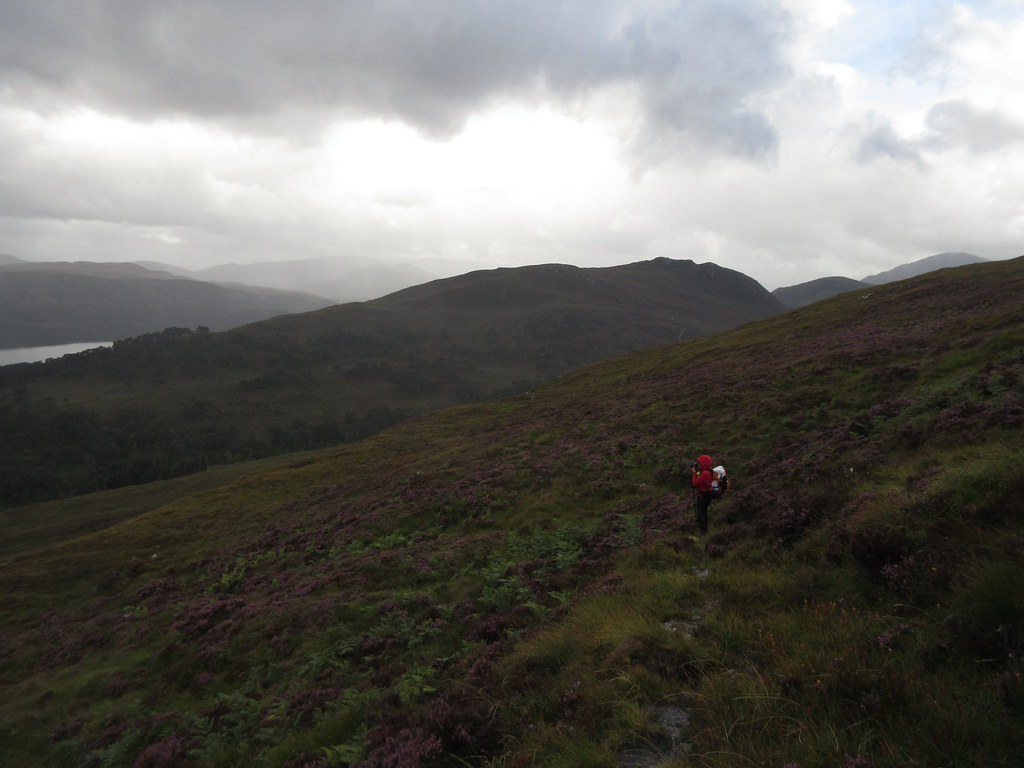 The pony path back to Glen Cannich

The path was barely used and quite overgrown but certainly easier than the surrounding ground. Higher up it petered out into the moorland, but not before leading us past a lovely hidden waterfall. Since I had been slightly dreading this crossing, this made me very happy. 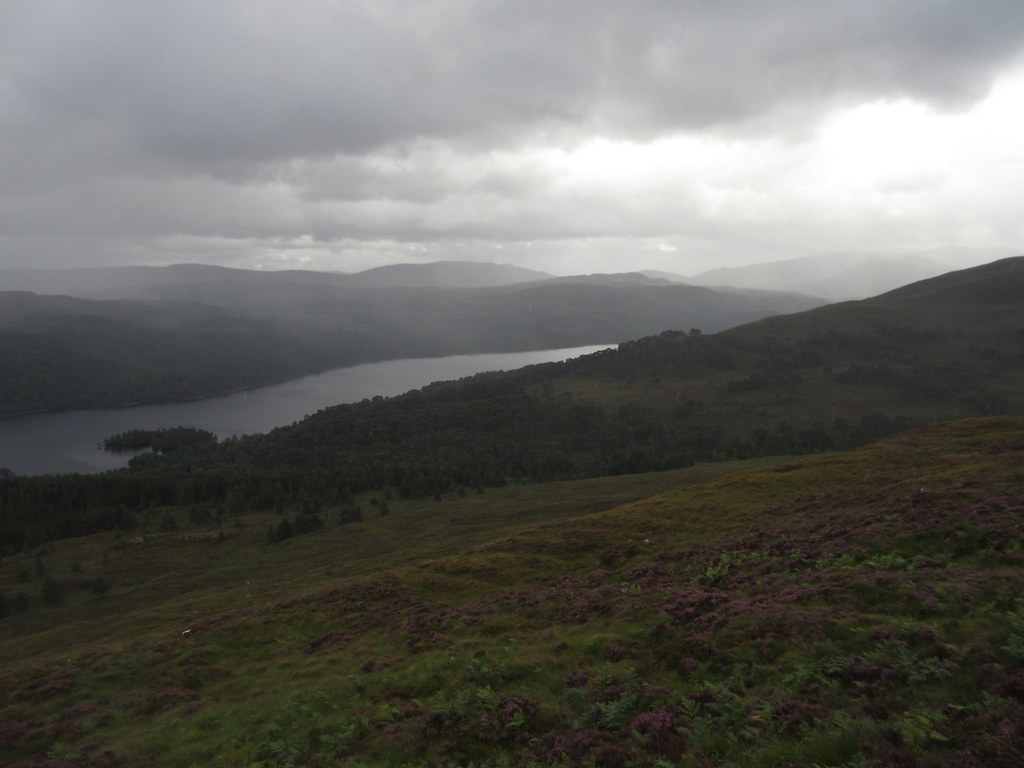 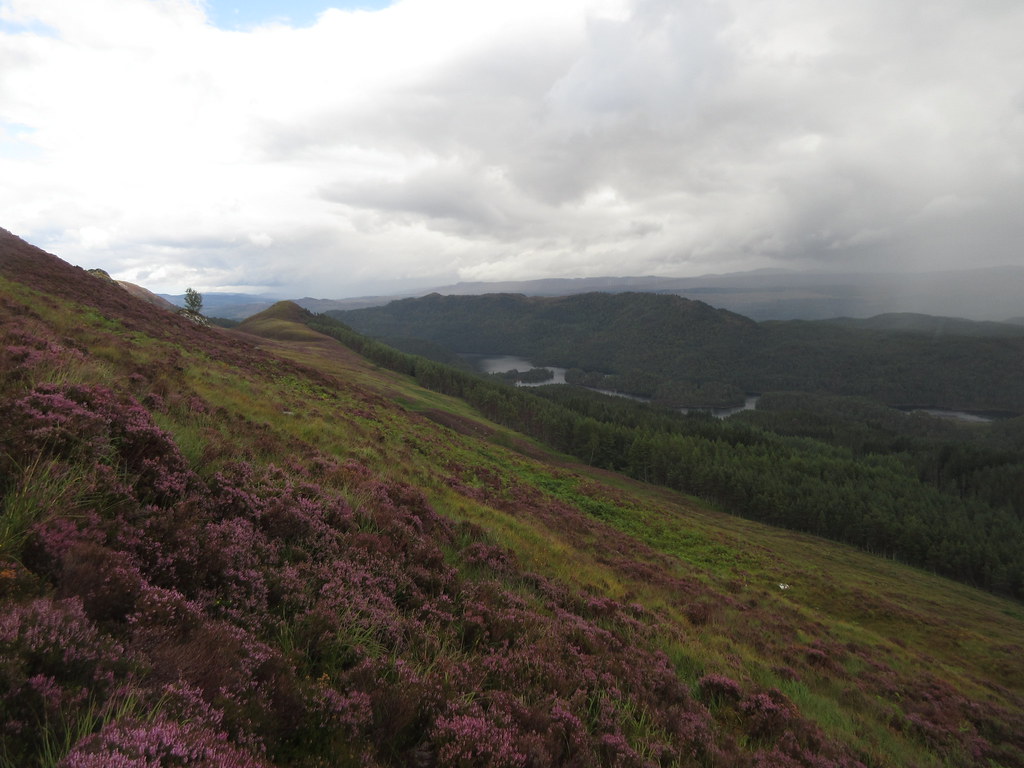 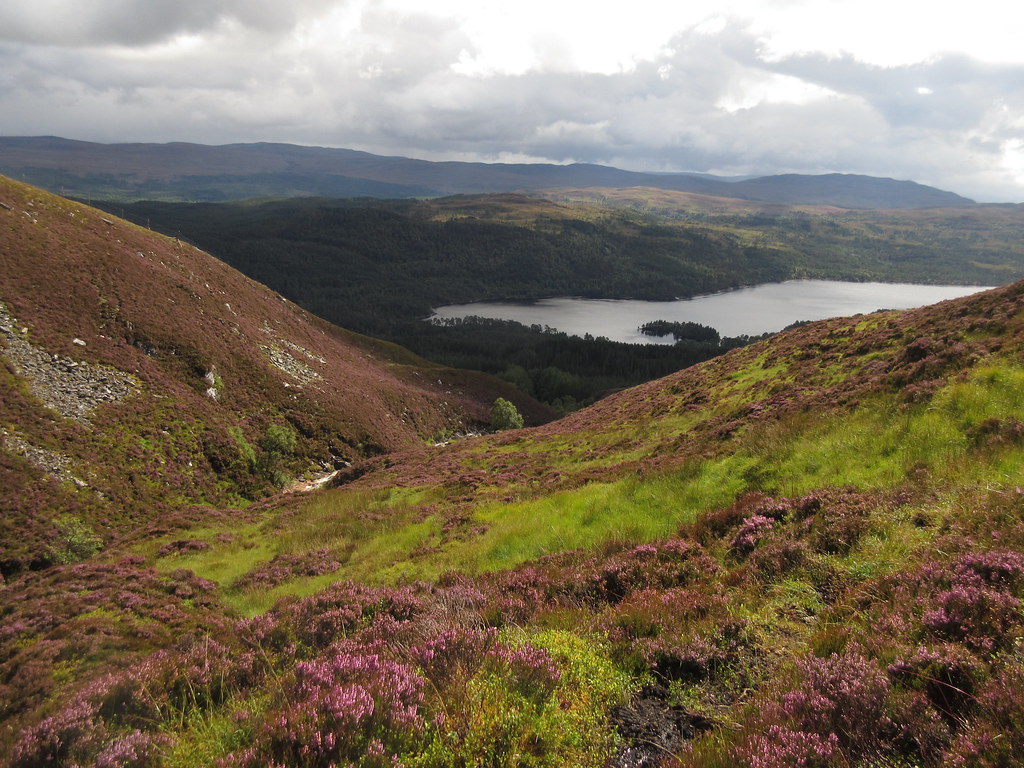 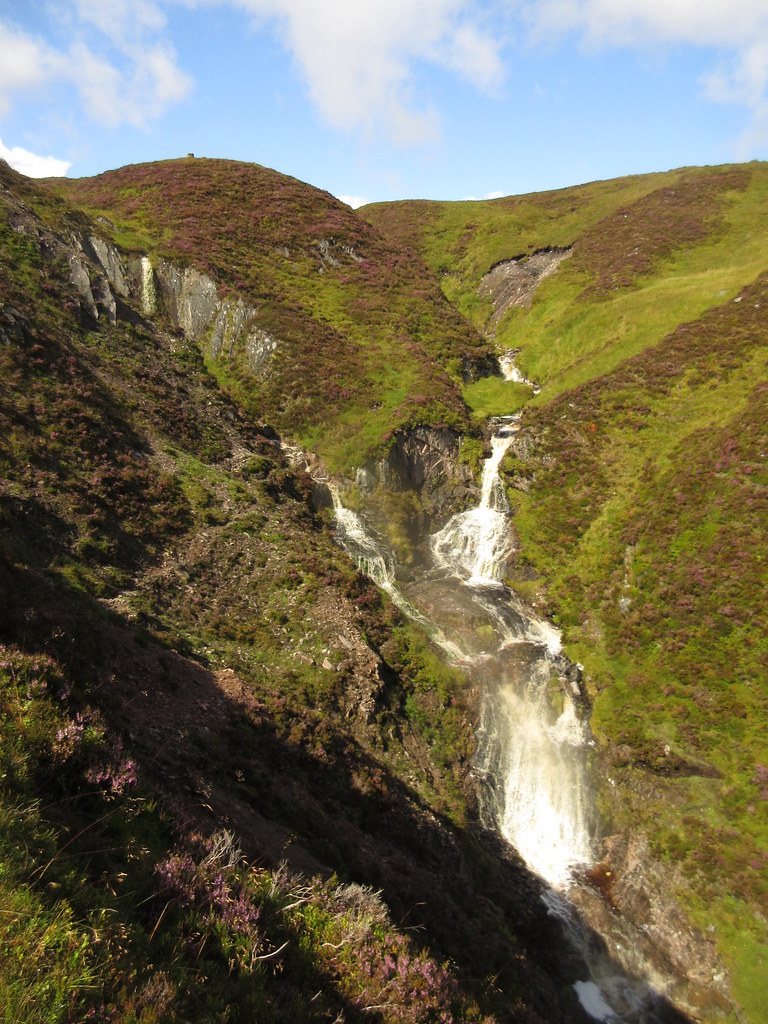 Waterfalls on Allt an Ruige Dhuibh

Beyond the falls, it was just a standard pathless wander across heather and peat bogs. Going down the other side was way slippier due to the vast amount of rainfall, and the last descent to the dam was quite a jungle. 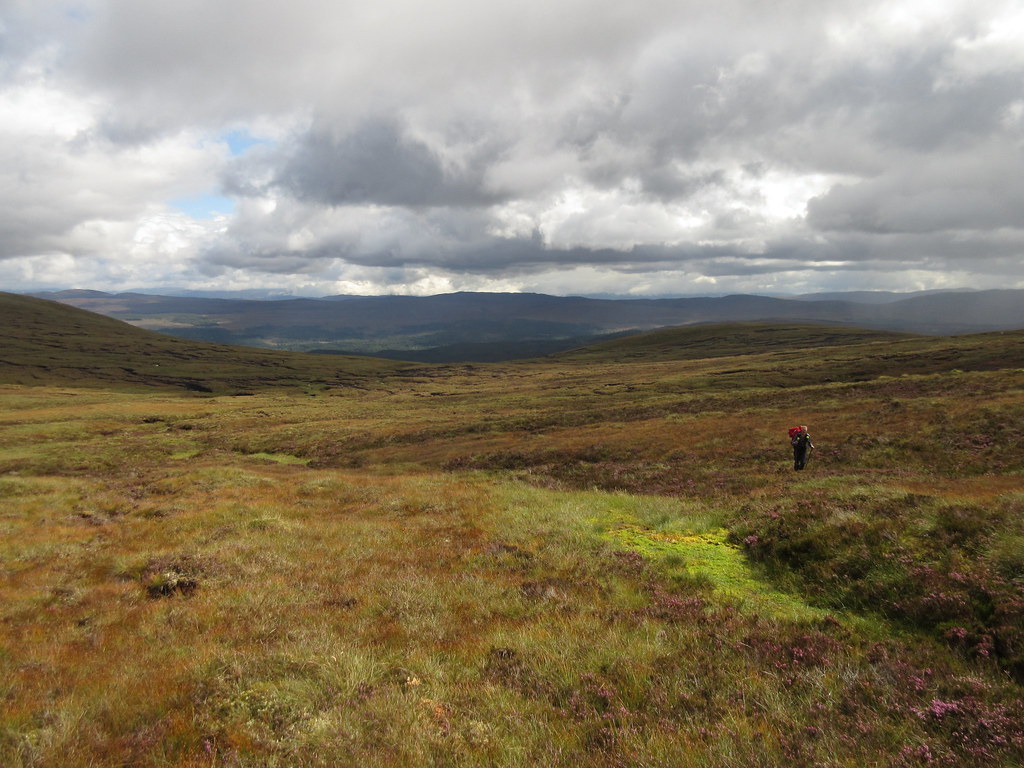 Hard going maybe, but again with great views, this time down Loch Mullardoch. 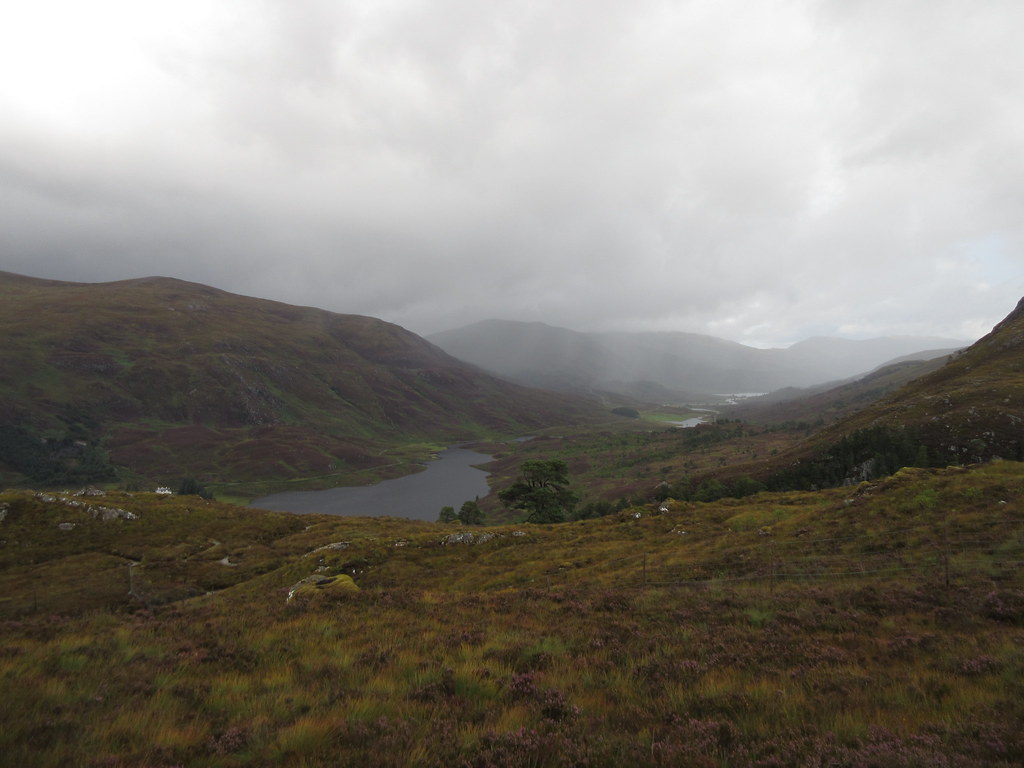 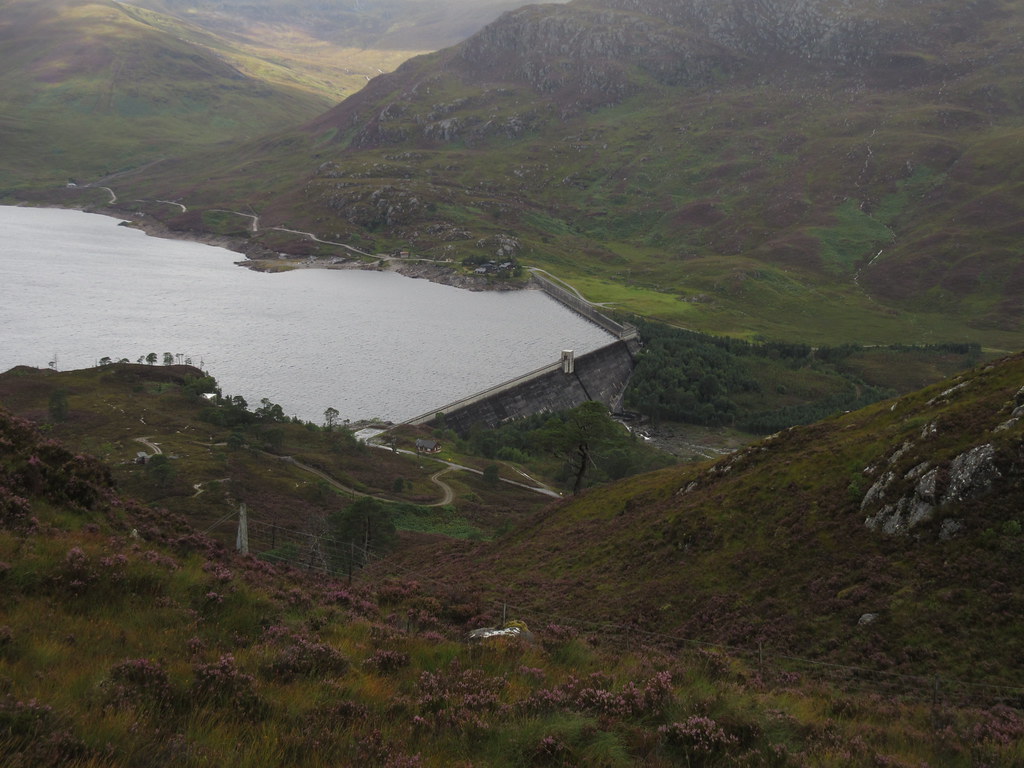 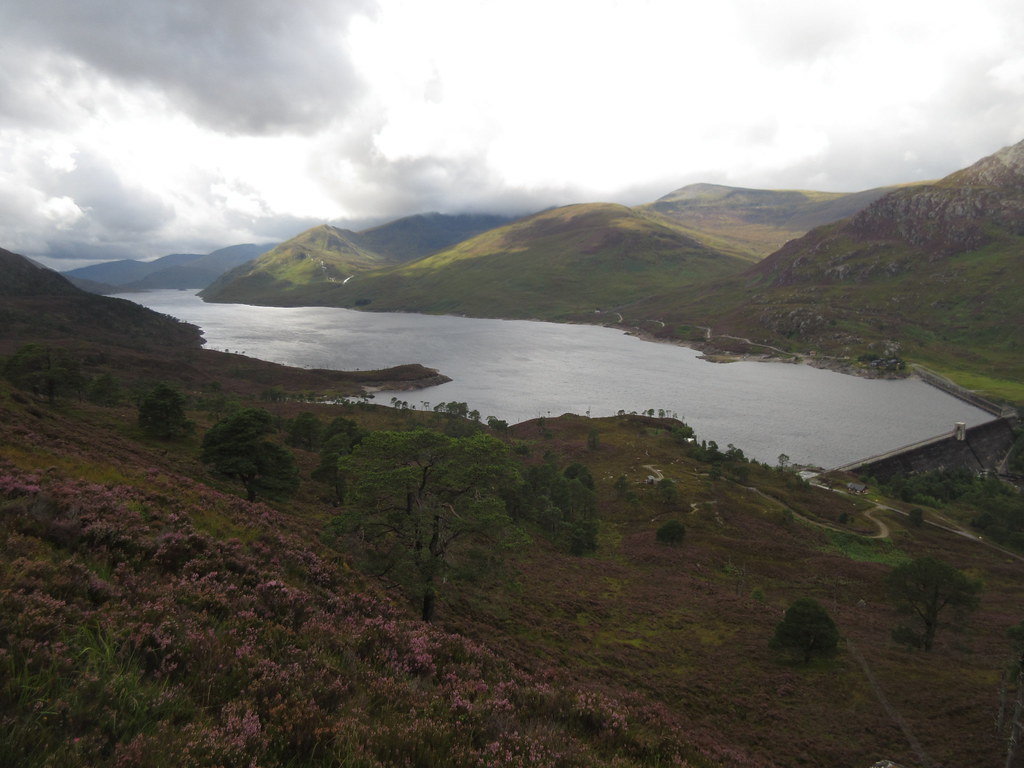 Loch Mullardoch from above the dam 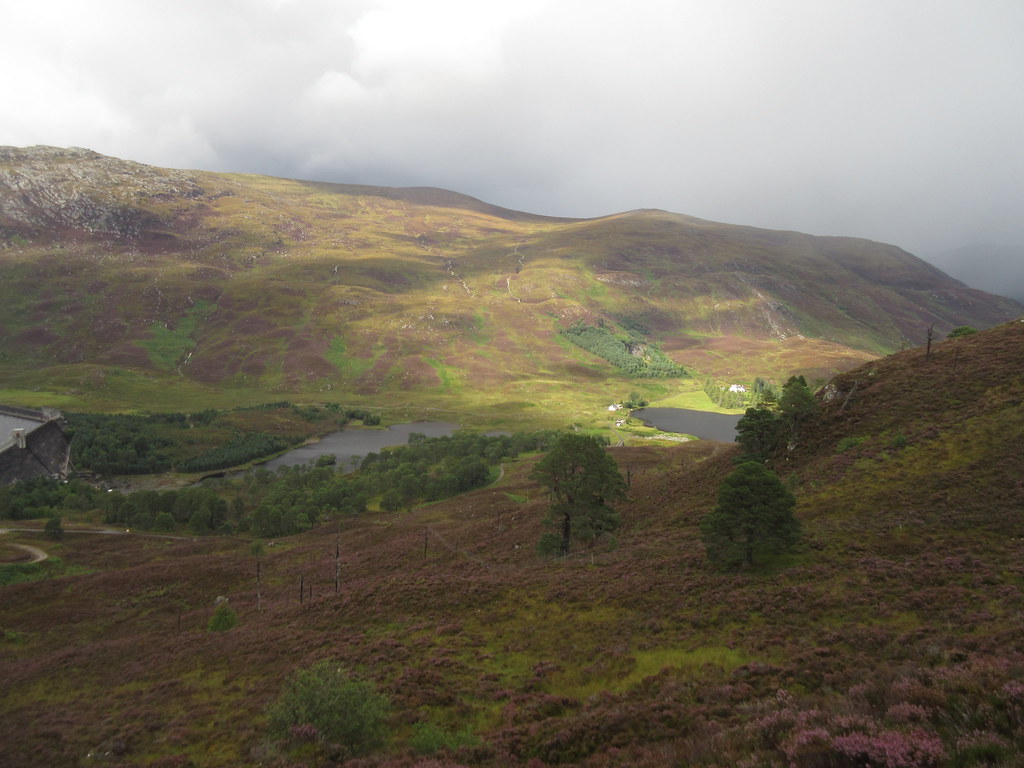 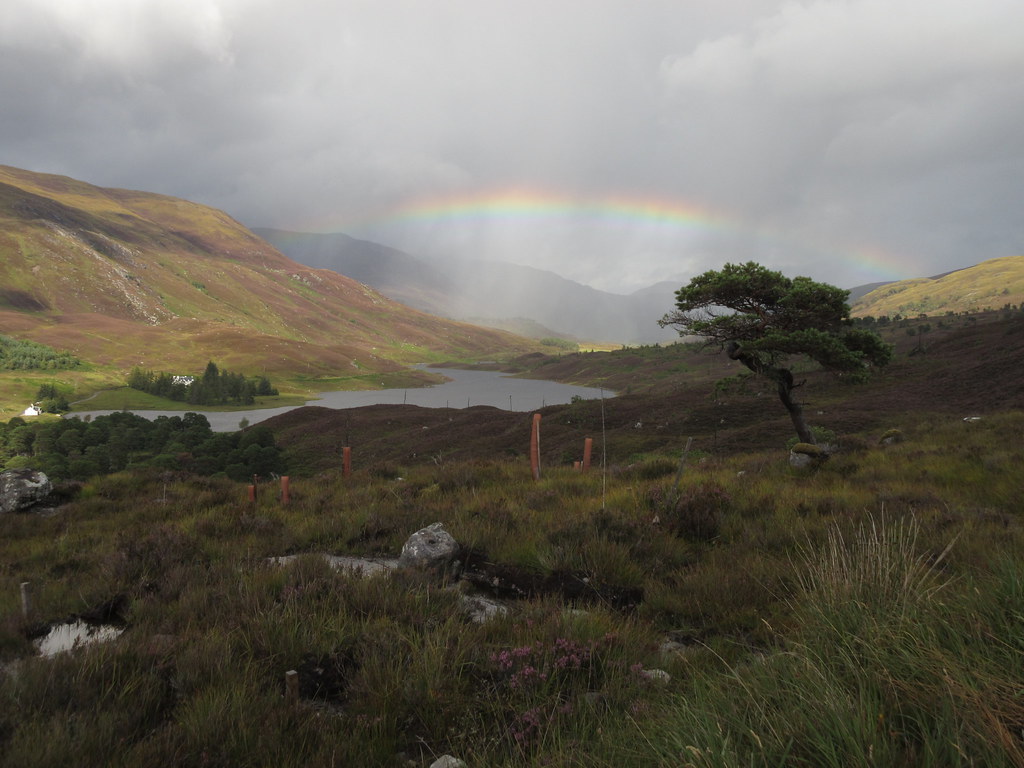 Soon we were on the road and wandering back round to the car a day early. Certainly not what we intended, but given that we got some interesting peeks into unexpected corners, not a wasted trip at all. Even the camp was worth it - I feel that I always learn from these sort of experiences, especially when they go wrong! Now the small matter of staying awake on the drive home.... 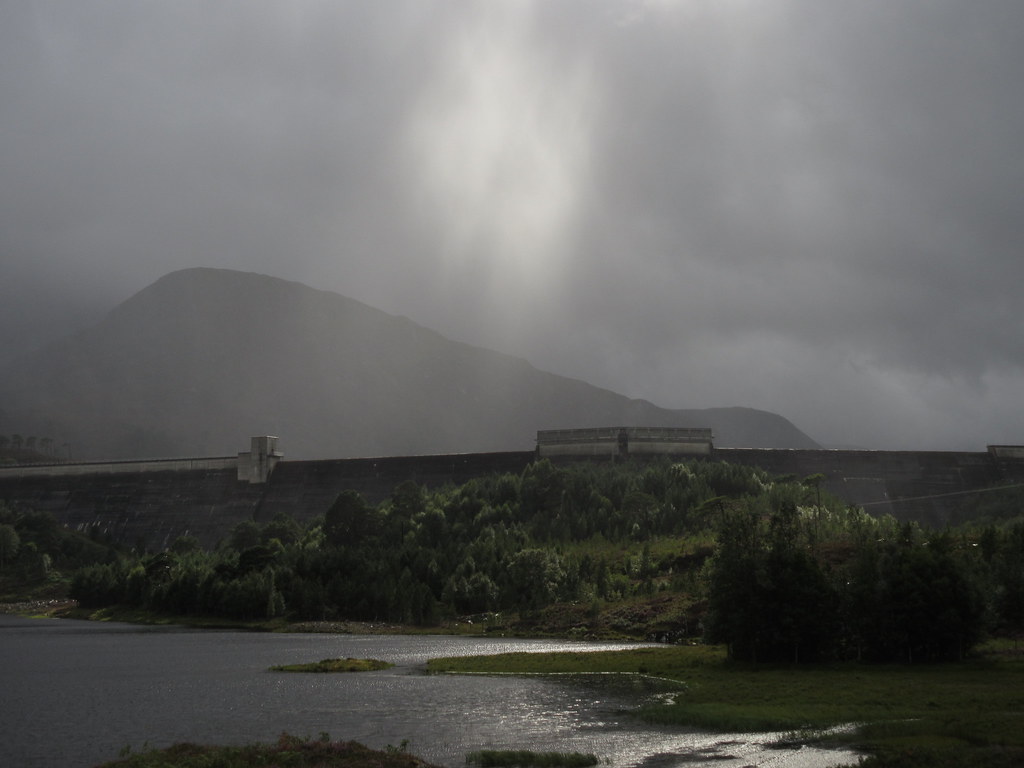 Last view of the dam

Since we had an extra day in hand and James wasn't due to fly home until Monday, we headed over to the Fannaichs on Sunday, up Sgurr Breac and A' Chailleach from Lochivraon. We chose badly, as the weather was quite reasonable just about everywhere apart from this pair of hills. While the walk was pretty benign, it was still showery with few views, hence barely any photos and no report. We took a detour into Ullapool afterwards for the chippy - it was pleasant down there and just about every other range of hills looked as if they had been out of the clag all day

Re: Not the Mullardoch round

Ha your some fella. Weather has been particularly poor over West this Summer.

I also have tendonitis of the foot to hamper my outings.