Creach Bheinn - singing in the rain

Creach Bheinn - singing in the rain


Creach Bheinn is rarely climbed on its own. Brave walkers combine it with the neighbouring Beinn Sgulaird or with Loch Creran Grahams. We had done Sgulaird last year (my 200th Munro it was

) so I was trying to work out some kind of circular, maybe adding Beinn Molurgainn, but mother nature intervened. During the week I suffered from some annoying stomach bug and come weekend I felt like chewed and spat out

Therefore, no giant walks in mind, but I wanted to get out and do some exercise. The simple up and down from Drumnavuic seemed a good option for slightly weaker Panther

Forecast for Saturday the 5th looked unsettled, with a good chance of showers and we did encounter a few on the way up, but all in all we had a reasonable day and added a new Corbett to our list!

Early in the morning, it didn't look rosy. I woke up still feeling a bit sick and couldn't stomach anything but hot coffee and cinarizine pills. Kevin made a flask of tea and packed in some breakfast bars. You'll eat something when we get there, he said. It's a long drive down to Loch Creran, over two hours, but when we arrived and parked at the small layby in Drumnavuic, I felt better, even managed a Go Ahead snack bar and some tea. Kevin knew I wouldn't be able to run up the hill, but as this route was only a half-day walk, he didn't hurry me. We had more than enough time.
We stuck to the WH route rather than trying anything too adventurous - it would be possible to make a circular by descending over Meall nan Caorach, but I wasn't up to any experiments.

Track_CREACH BHEINN 05-08-17.gpx Open full screen  NB: Walkhighlands is not responsible for the accuracy of gpx files in users posts
The first stage of this route is the same as for Beinn Sgulaird: up the track to a metal gate. The board on the gate says "Beinn Squlaird" I guess it must be the alternative spelling? Walking was easy on the track but I was glad we didn't pick anything bigger today... Views from the track are somehow restricted but a nice panorama behind us showed Loch Creran and Moidart hills on the horizon: We spotted two walkers in front of us, but they soon turned up Beinn Sgulaird, so we guessed we'd be alone on "our" hill and just as well in case I suffered an embarrassing return of the bug!
At the moment, we had a large herd of coos for company. They were not of highland breed, but not of an aggressive one, either. They just watched us as we walked past, waved their long tails and chewed grass in silence. I even tried to strike a conversation, but cows obviously don't speak Panther language... Higher up, still on the track, we had a good look at the cliffs of Creag na Cathaig...

...before Kevin warned me, pointing at the western horizon:
"Rain is coming. Better dress up!"
Yes, a big, dark cloud was moving very fast in our direction, so it was time to dig up waterproofs, put cameras away and get ready for the drenching!
Rain coming: The shower caught us close to the top of Coire Buidhe and with it came the clag, immediately restricting our visibility to 10-15 meters. Kevin had his GPS with WH waypoints in it, so we didn't have to worry about missing the summit. We found a grassy path branching off the main track (042440) but it petered out. In the rain, going up was slow and the ground was slippery, but the slopes were mostly grassy if steep in places.
The rain stopped when we reached the top of Creah na Cathaig (662m) and the clag began top lift, too. Here comes a chance for a cloud-free summit, I thought!

The shower moving on: As the clag disappeared, we saw the final stage of our climb. This is also pathless but mostly on grassy terrain. OK, the "face" looks very steep and intimidating, but no scrambling involved here:

The best line of "attack" for the steepest section is to the left of a small waterfall. The ground was soaked so we had to be careful and check every step, but there's nothing technical to be afraid of: 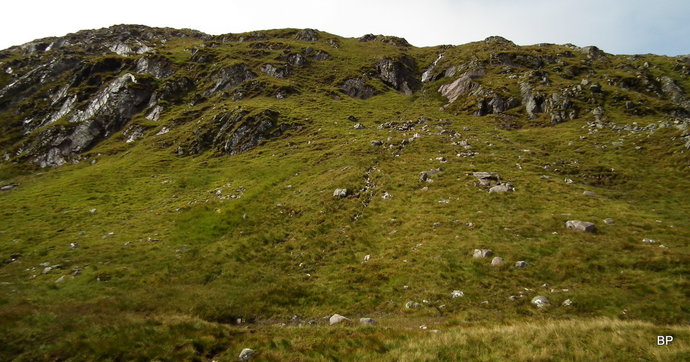 It took some time, but eventually we hauled ourselves up the steep section and onto easier slopes. Looking down, we could see Creag na Cathaig below, emerging from the remnants of cloud: 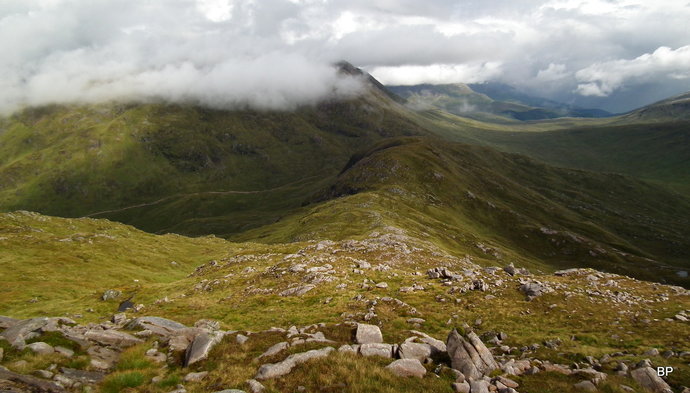 Beinn Sgulaird still covered, but the cloud was breaking: We continued up for another 100m, on mixed terrain of grass and rock, to the first top (804m). The summit it another kilometer away along the ridge but as weather was improving, we didn't mind some ridge walking.
The climb to the 804m top:

Beinn Trillieachan and beyond, the Etive Munros still covered in cloud: 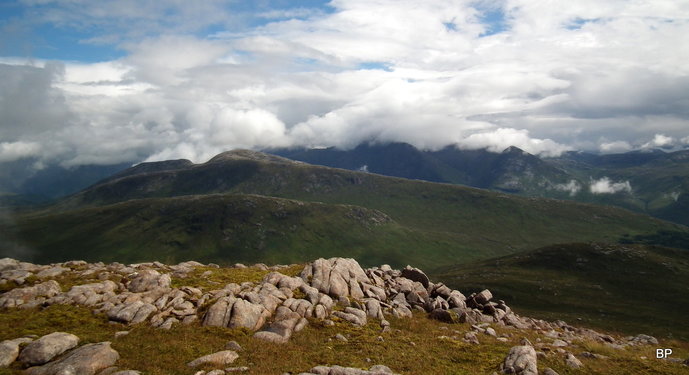 Walking along the ridge was a delightful stroll in the midday sunshine and soon we reached the summit. Wee Lucy popped out of my rucksack to pose for her half ton on Corbetts! Kevin grabbed his camera, because we spotted another darker cloud in the western sky, but it seemed we had some time before this second shower reached us. I must say, Creach Bheinn is an outstanding viewpoint, even judging by the restricted views we had.
West to Loch Creran and Lismore (well, some of it visible):

One of the Creran Grahams, Beinn Bhreac I think - a target for the future: 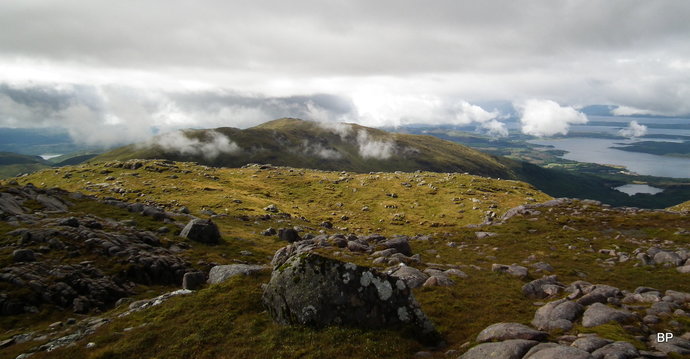 Let's go before we get wet! We had a quick sandwich and drink before leaving the summit of our 128th Corbett. The shower caught us as we descended from the 804m top, but it only lasted about 15 minutes. We carefully descended the steeper section and returned to Creag na Cathaig, to witness more "dancing cloud spectacle" as the sunny aspect of Buachaille Brothers was revealed:

The shower we just encountered passing east towards Glen Etive: 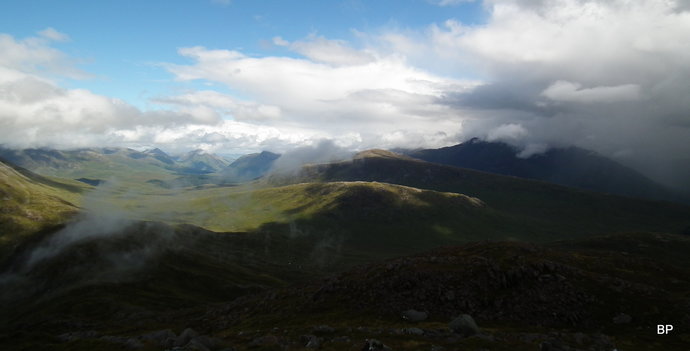 Looking very grim... The NE panorama from Creagan an Cathaig:

View west from the way down:

Zoom to Moidart hills (Garbh Bheinn and the other Creach Bheinn if I'm correct):

We slowed down on the way back, descending carefully over the wet ground to the track in Coire Buidhe, then retraced our steps back to the car. It took us over 6 hours but I wasn't up to scratch with my performance and weather didn't play up, either... Though it could have been worse. We still had some fantastic views from higher ground and witnessed the dancing cloud spectacle which always makes me gasp...
Had this hill been close to home, we would probably keep it for a winter walk and I think on a nice winter day this route should be a real cracker!
.............
I can hardly wait to post my next story. At last, we're coming to the tale of Foinaven Fortress and the stupendous day we had exploring the ridge. TR soon to follow

Re: Creach Bheinn - singing in the rain

Some very atmospheric conditions there.

The alternative spelling of Squlaird is for days when it is Squelchy. Most days, then.

Looking forward to the Foinaven Story!

Re: Creach Bheinn - singing in the rain

The alternative spelling of Squlaird is for days when it is Squelchy. Most days, then.

Looking forward to the Foinaven Story!

Ha ha, "Squelch-laird" sounds good. We did it on a cloudy day and also after rain, the bottom half of the climb was as "entertaining" as a slippery slope can be

We're celebrating our 10th wedding anniversary this weekend so I'll be busy but try to post Foinaven as soon as I find time.