I like hairy wild goats. The look of them makes me smile and I respect their ability to thrive in harsh places. I admire their fearless agility on steep, exposed hillsides and I like the slightly indignant way they stand and watch any humans who wander into their habitat. A walking friend once described me as a stubborn old goat so maybe there's a bit of kindred spirit going on in there as well.

I'd already come across goats on An Teallach, Slioch, Beinn Damh and at the foot of Beinn Ghobhlach, and was hoping for another ungulate encounter on Sail Mhor, which is meant to have a herd in residence. We parked in the layby beside the waterworks just west of the bridge over the Ardessie Burn, the only car there. We walked back to the bridge and had a look at the waterfall. We followed a rough path steeply up the east side of the burn with views of higher waterfalls as we went. In places the water had carved deep channels in the rock, creating some interesting shapes. These waterfalls make the climb worth the effort, even if going no further. We didn't follow the WH route but crossed the burn well before the crossing point at the confluence mentioned, which we kept for the return. From above it looked like there wasn't much water - although obviously enough to produce those waterfalls. Despite the large number of boulders both James and I debooted to paddle over while Ian managed to hop across with boots on. We then took a rising traverse before ascending the SE ridge, the route suggested by Hamish Brown. As we gained height we could see moving objects on the crest of the SW ridge which didn't look quite right for deer so must be the Sail Mhor goats! I hoped they'd still be on the ridge by the time we were on our way down from the summit.

At the foot of the SE ridge West side of An Teallach from Sail Mhor's SE ridge There wasn't any path to follow but it was a good route up with sculpted sandstone outcrops at the top.

Nice little scramble and James is first up It was clouding over and the wind was picking up so we stopped for a bite to eat before going any higher. Even under dark skies the views of the less seen side of An Teallach and into Fisherfield were breathtaking.

Ian and James enjoying a seat with a view 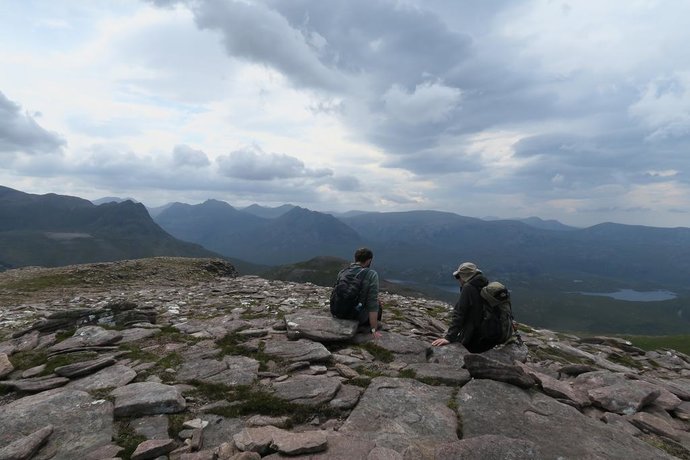 Walking round the rim of Sail Mhor's curving crest with views out to sea was magical and I would recommend this as a great way to climb Sail Mhor, with sea views on the way round to the summit and stunning views into Fisherfield decending the SW ridge. Beinn Ghobhlach and north to Coigach The first and more northerly cairn is the larger of the two and gives the best views west and north. But the true summit is probably the smaller one a little further south. The wind was so strong we didn't hang around for long - just enough for a quick photo by the cairn. 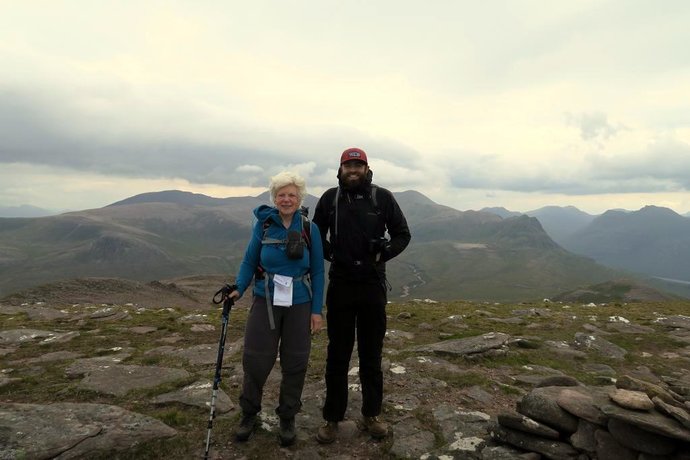 Then we spotted them. Grazing a bit lower down the ridge and to begin with unaware of our presence, perhaps because most folk climb Sail Mhor by the WH route and they didn't know we'd sneaked up by the SE ridge.

So now for some wild goat information, gleaned by googling "Scottish wild goats".

"Officially known as British primitive goats, these long-horned ungulates are thought to be descended from domesticated wild goats. Historically, there have been long established scattered populations all over the wilder hills of the UK. Goats first appeared in Scotland with the Neolithic farmers some 4,500 years ago. From then on, no other breeds of goat were resident in the UK until the late 18th century."

It's also believed that some of our wild goats are directly descended from domesticated goats released into the wild at the time of the Clearances, when people were forced off the land to make way for sheep. "Legend suggests that wild goats are protected by what could be Scotland’s earliest wildlife laws. It’s said that Robert the Bruce passed an act to safeguard the goats after a herd saved his life by distracting soldiers searching for him as he hid in a cave by Loch Lomond."

Not being originally native to the Highlands the kids are born in February, which is more suited to the climate of more southern parts of Europe, the result being many don't survive our harsh winters. Lacking a natural predator to control the numbers this has helped to keep the numbers down but recent milder winters have seen a rise in population. Goats are voracious and determined herbivores and in large numbers can do a lot of damage. They have also been involved in a number of road traffic accidents, although I doubt as many as sheep or deer. Whatever the reason there has been mounting concern and in Ardnamurchan measures are being taken to control numbers by culling the older males. When they first clocked us they moved away but when we stopped and waited they seemed to realise we weren't a threat and carried on with the serious business of eating. Or staring at us the way goats do. Mission accomplished and we'd had our encounter with the Sail Mhor goats.

Then it was simply a case of continuing on the path down to the bealach and turning left to follow the burn down to the Ardessie which we crossed near the confluence at NH045875. We then picked up the path over the moor, level at first and then steep as we dropped back down to the road. The dark clouds had looked threatening and the wind up top was strong but it stayed dry and by mid afternoon the cloud had mostly cleared to give us blue skies, making me wonder if we should have left later and timed it to get the good weather up top. Not that I'd any cause for complaint. It's such a hill of character.....with its stunning waterfalls, wee scramble, views of An Teallach, Fisherfield and the Summer Isles..... and of course the icing on the cake for me was finding the hairy goats!

I notice this is my 200th report which makes me realise that since joining Walkhighlands I've used an awful lot of hours writing this stuff. Really need to get a life. But I'm glad my 200th went to the goats.

One of my fav half-day hills

Lovely shots of goats. We met the very same herd last year in November, when we did Sail Mhor in winter conditions, but they were down below the waterfalls and on the way back we met them again tiptoeing along the road. I've seen goats on An Teallach and in the western Fannichs (Sgurr Breac I think) as well, they seem to thrive in Scottish climate. The only inconvenience for us hill-wanderers, is the smell they leave behind

They do sometimes give us that "ferocious" look which makes me shiver... as if they were saying "What are you doing on MY mountain???" Here's one from Beinn Enaiglair: 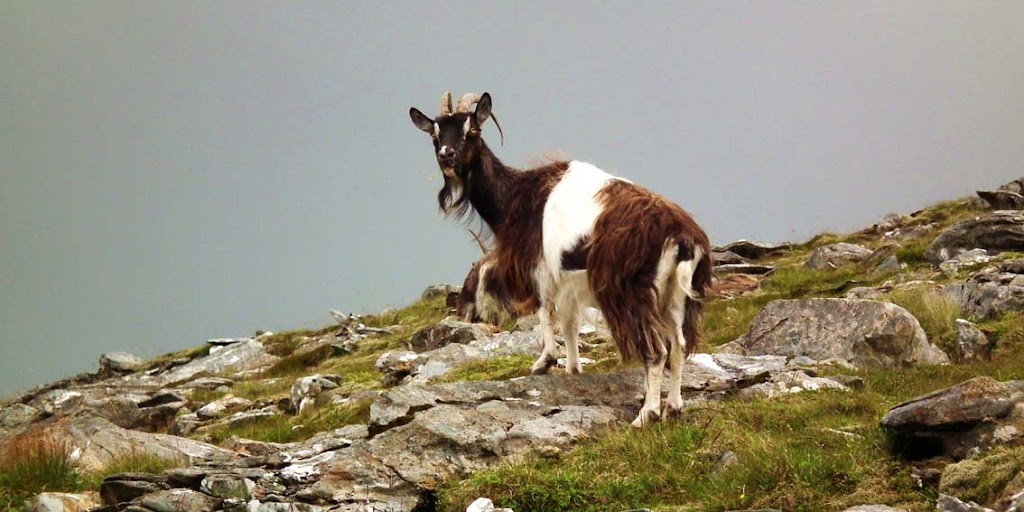 Nice to the see the views from the summit. Various parts of my anatomy nearly froze off up there in April in the course of a rather interesting day!

Lovely shots of goats. We met the very same herd last year in November, when we did Sail Mhor in winter conditions, but they were down below the waterfalls and on the way back we met them again tiptoeing along the road. I've seen goats on An Teallach and in the western Fannichs (Sgurr Breac I think) as well, they seem to thrive in Scottish climate. The only inconvenience for us hill-wanderers, is the smell they leave behind

Know what you mean about the smell but didn't smell a thing when we met them this time.

Graeme D wrote:Nice to the see the views from the summit. Various parts of my anatomy nearly froze off up there in April in the course of a rather interesting day!

Was that the day you started off near Gruinard Bay? Vaguely remember reading about it but can't find your report on it now.

That was the one!

I forgot to add that we came across a damp and slightly foostie Sherpa Adventure Gear hat on the way back down to the Ardessie.

I've washed it and it's come up quite nicely so if anyone's missing it let me know and I'll send it on to you.

You didn't find an even more damp and foostie OS sheet 19 by any chance did you????

Fine viewpoint up there, must get over myself, worth it just for the waterfalls, great photos

Graeme D wrote:You didn't find an even more damp and foostie OS sheet 19 by any chance did you????

Think that will have gone to the land of lost OS sheets - along with two of mine!

spiderwebb wrote:Fine viewpoint up there, must get over myself, worth it just for the waterfalls, great photos

It's got a lot going for it and only takes half a day.

Thanks for the info about the goats, I agree with BP they can look awffie fearsome! As for writing 200 reports you really put me to shame, I haven't even done anything with the photos I've taken over the las 10 months

Thanks for the info about the goats, I agree with BP they can look awffie fearsome! As for writing 200 reports you really put me to shame, I haven't even done anything with the photos I've taken over the las 10 months

Well I for one want to see them so you'll just have to tear yourself away from the childcare and gardening and get them on here!

I'm away behind with recent reports and need to get myself motivated.