I had been really looking forward to revisiting the Eastern Mamores for Binnein Mor and Binnein Beag and my OH's idea that we link them together by the scramble up Binnein Mor's rocky NE ridge (Sron a Gharb Choire) gave the plan added excitement.
At last a dry day between August's constant wind and rain arrived

and we managed to make an early start but the 100 mile drive meant it was 9am before we arrived in Kinlochleven. Half the car park at the Church was closed for some excavation work, (it looked like they were draining some of the woodland

), so were pleased we were not any later. 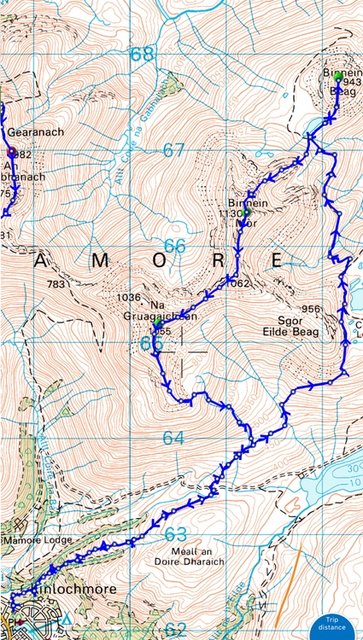 The eroded woodland paths made an inauspicious start to the walk, giving few clues about the stately summits, remote coires and rocky ridges that lay ahead, but at least we did not mislay the path and it was not long before we were out of the woods and could turn around and admire views. 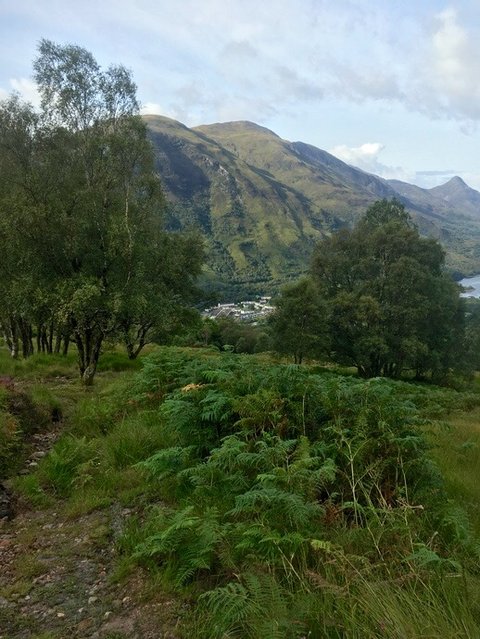 After several days of heavy rain the footpath leading to Sgor Eilde Beag was very wet and muddy, with streams running down the path and we had to quest around to find a secure place to cross the Allt Coire Nan Laogh. Although it wasn't raining the air was damp and I was concerned that our easy scramble may be a more slippery affair than we had anticipated

.
Following the path around Sgor Eilde Beag it seemed we would be on its summit before we reached Coire an Lochan

, but eventually the path divided and we continued on the lower branch, skirting the edge of Coire an Lochan with the view of Binnein Beag beckoning us forward. 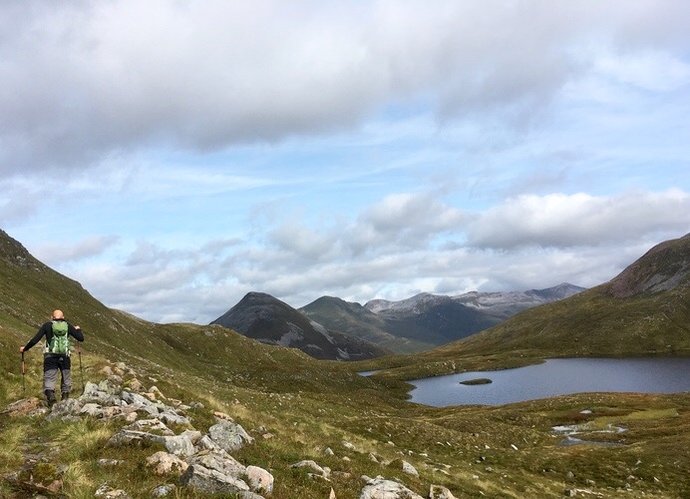 Coire an Lochan looking towards Binnein Beag with Choinnichs behind

We stayed on the stalkers path as we had visited Sgor Eilde Mor last winter and did not feel the need to add a diversion up its loose scree slopes today.
Walking into Coire a Bhinnein I was dismayed at the height loss and the distance we still had to cover to the reach the saddle between the Binneins, but my disappointment was soon replaced by admiration for this beautiful, remote valley, and the pure joy of walking through it more than compensated for the height loss. 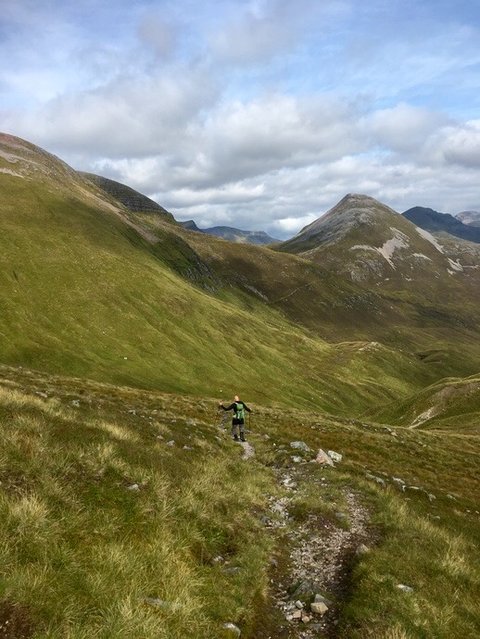 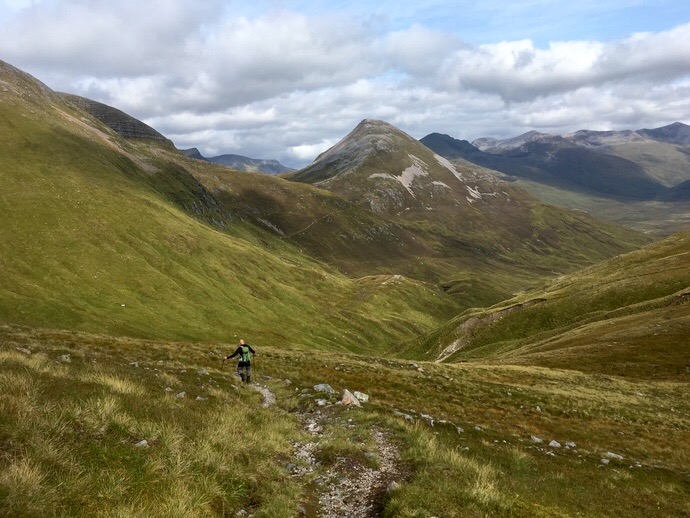 12:30 and we were on the saddle. Binnein Beag's, unusual curved shape and steep white slopes gave it a distinctive presence despite being the lowest Mamores Munro. The route up looked loose and steep but there was a path all the way and going up was straight forward, coming down felt far more unstable under foot and took at least as long as the ascent. We didn't stop long on the summit, which is a bit of a shame because it was a fine situation, but we were eager to get back to the saddle for lunch

and our scramble up to Binnein Mor. Coming down Binnein Beag, Sron a' Gharb Choire was directly in front of us and we kept stopping to admire and study it, feeling slightly anxious, as it looked very steep from this angle. 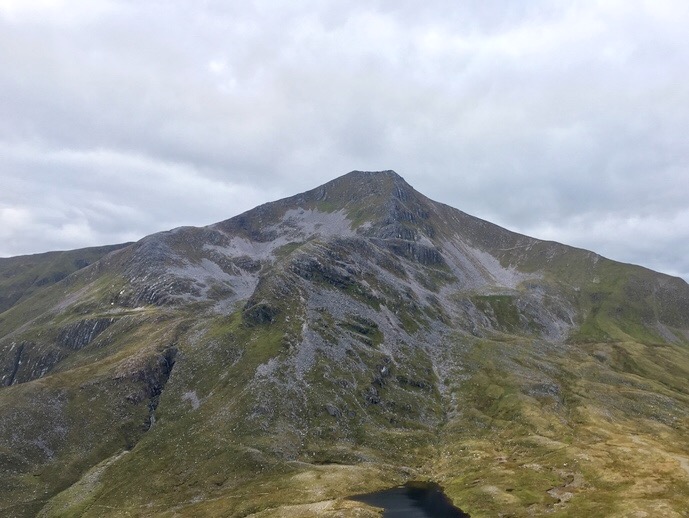 We stopped in the saddle to brew tea and soup for lunch, then, suitably nourished, and water bottles filled, it was time to make a move. 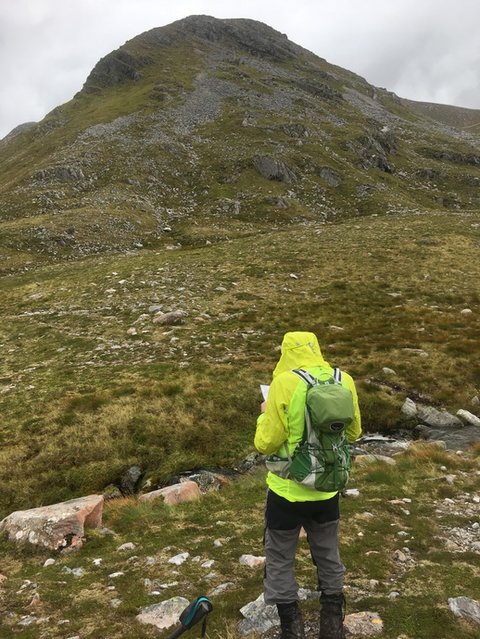 Binnein Mor and NE Ridge from the Lochan

The slopes leading up to the ridge were still looking very steep, but we were able to weave our way up on grassy steps to reach the easier ground on the broad crest. 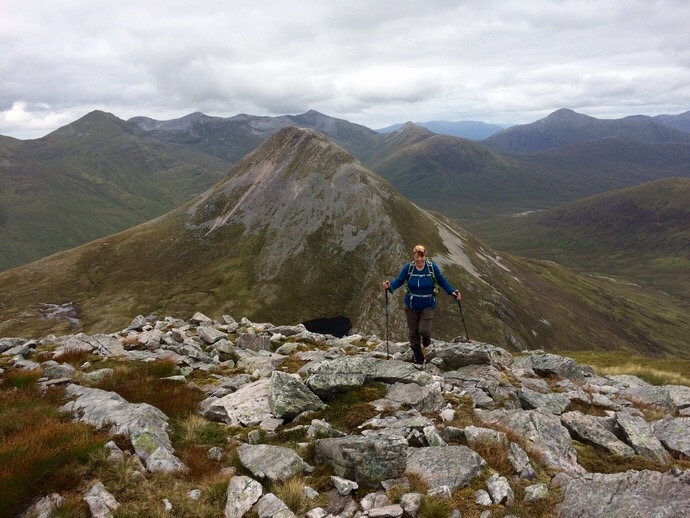 The crest was mainly walking on grass and boulders with the an occasional rocky section until the angle eased and we crossed a rounded hump of boulders to reach the crags behind.
I found a few walk reports of folk going up this route all whom described it as a fine scramble and Highlands Scrambles South grade the ridge as a grade 1 or 2 depending on which route you choose. Apart from this we did not find it mentioned in any other guide books or walking routes, which is really surprising as it was a magnificent scramble, on good rock, on par, with many of the classics and the required route finding gave it an added sense of adventure.
We sought out the easiest route up and I thought it a fairly hard grade 1, perhaps because of the damp quartz, but there were a couple of squeekworthy moments. There were three bands of rock (Schist and quartz) and on each band you could choose a line that took your fancy. There were good handholds, the schist was quite grippy but the quartz was damp and greasy. We wove our way up through the rocks but a direct line looked a very pleasing but harder scramble. 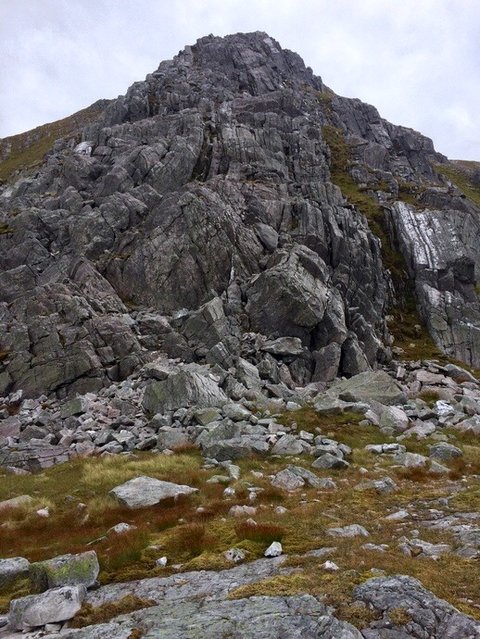 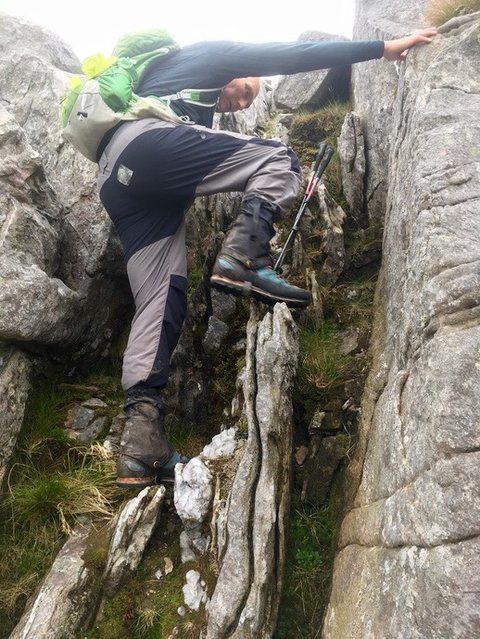 Choosing easiest route up the flakes 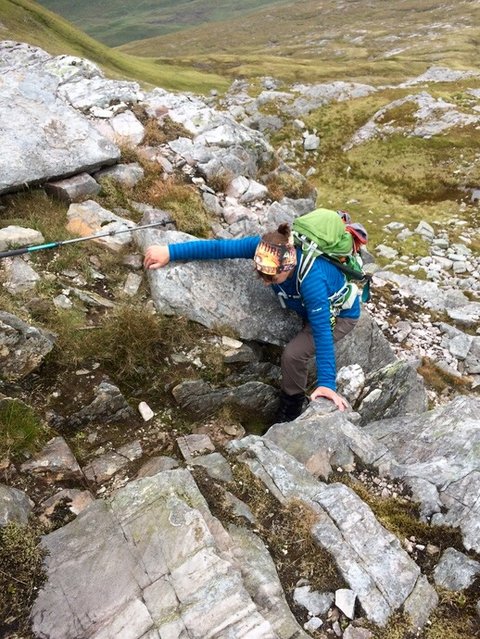 It was all a bit slippery 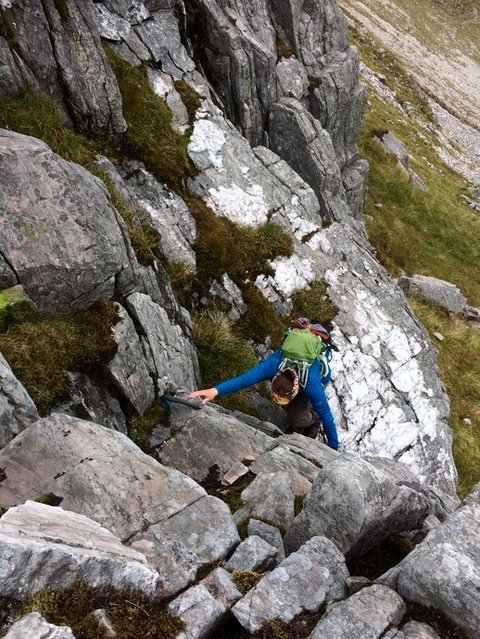 Topping out of a gully 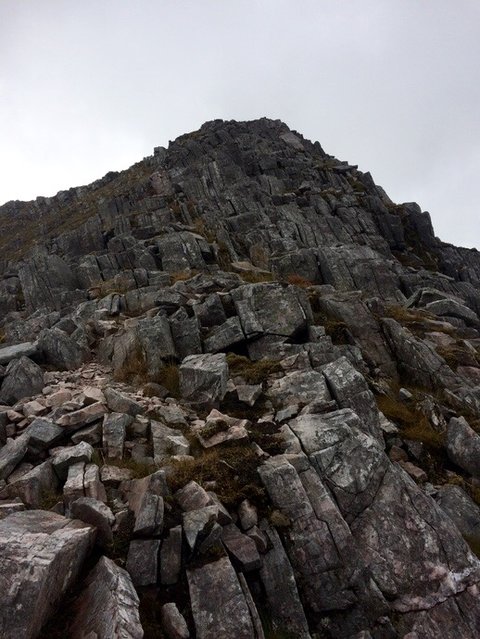 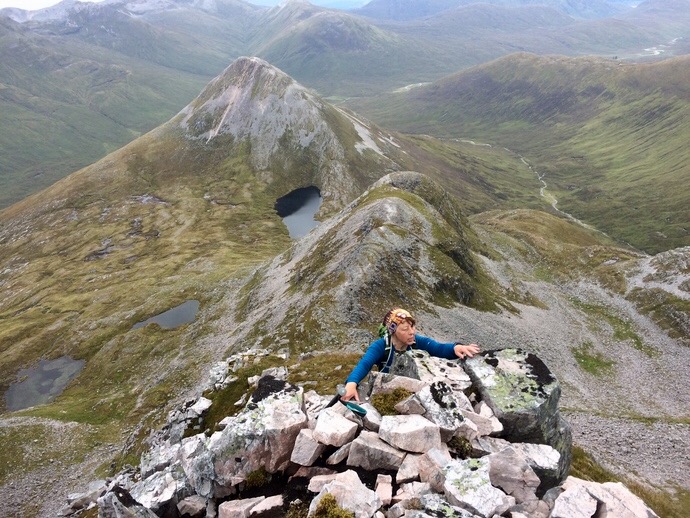 Would be good views if you could turn around

At the top of the third band was a final short steep scramble up onto the summit arete I felt my resolve crumble,

it looked like a friction was required and there was no friction available.

I think I must have let out a huge sigh of relief when himself suggested taking the bypass path.

The path was loose with a long drop to one side, but wide enough for you to stay well in and it took us around the side of the crag then up onto the arête.
Clambering over the boulders on top of the narrow arête was a great way to approach Binnein Mor summit. 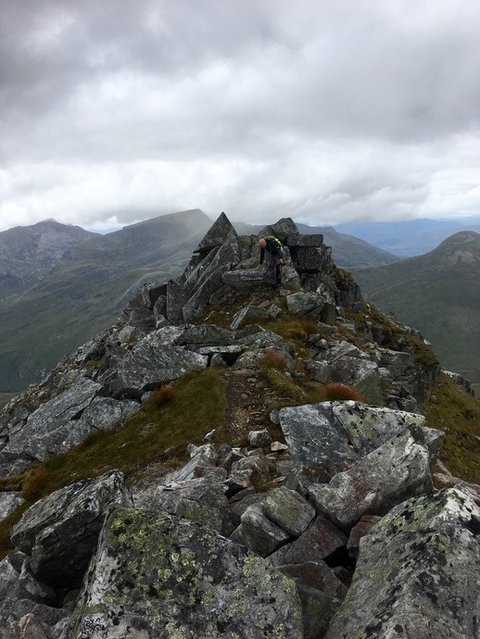 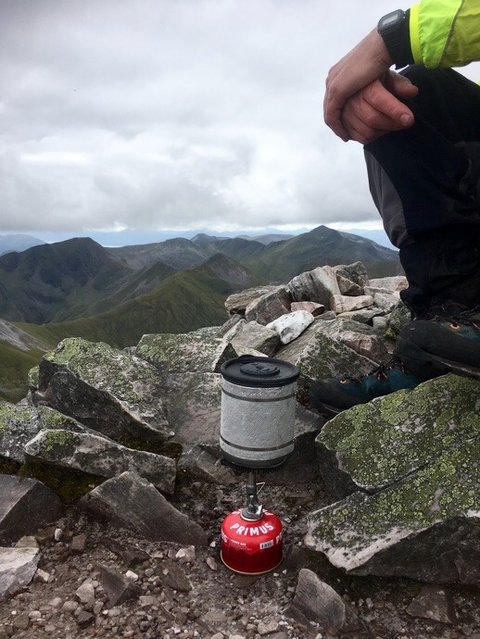 16:15 Jeremy Jetboil on Binnein Mor ( he didn't come out on Binnein Beag but shhh don't tell him)

We relaxed, enjoyed the views, made tea and as we were going chatted to a guy doing the round of ten Munro's, he had just two to go

, and was on his way down the way we came up.
From Binnein Mor we followed the ridge around to Na Gruagaichean. We partly followed the path but did a bit of clambering along the top, enjoying the views and the situation. We did not meet any other walkers although there were a couple of people in the distance setting up camp in the Coire.
At the end of the ridge there is a boulder field leading up to Na Gruagaichean summit, this came as a bit of a surprise as we had been along the ridge in winter and been completely unaware of the boulders. 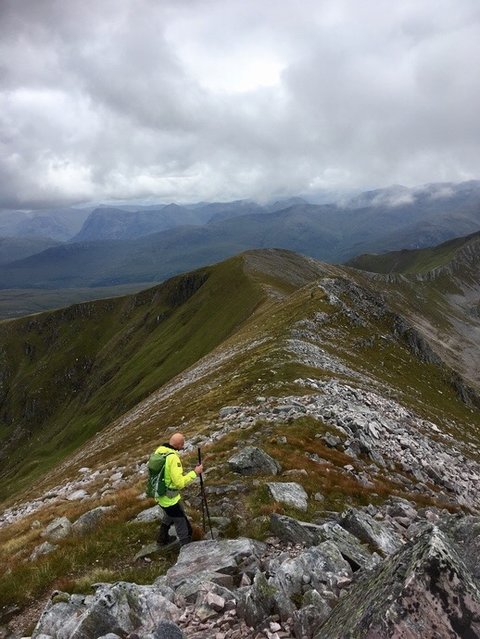 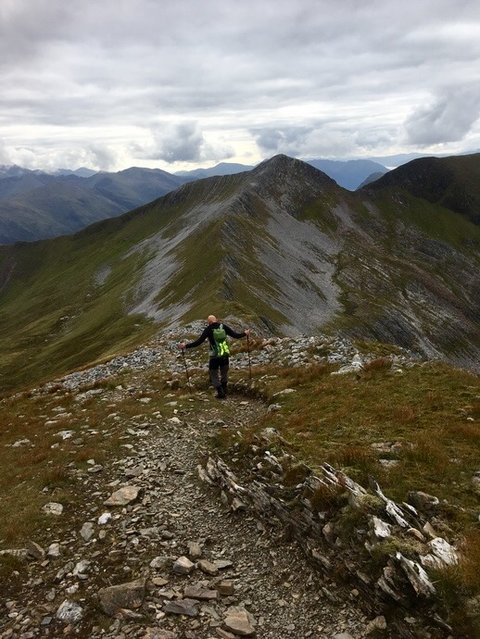 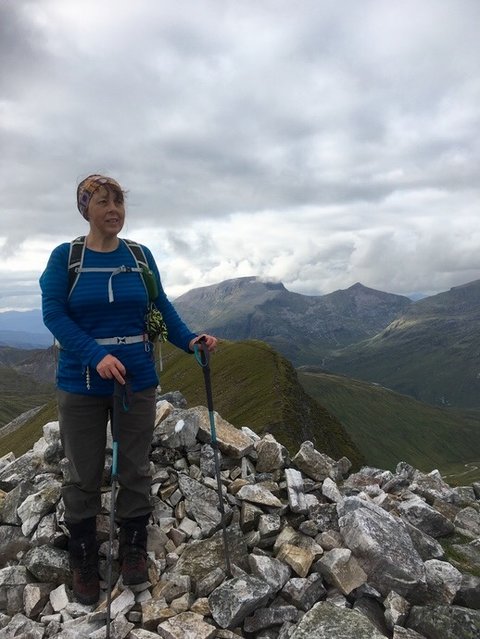 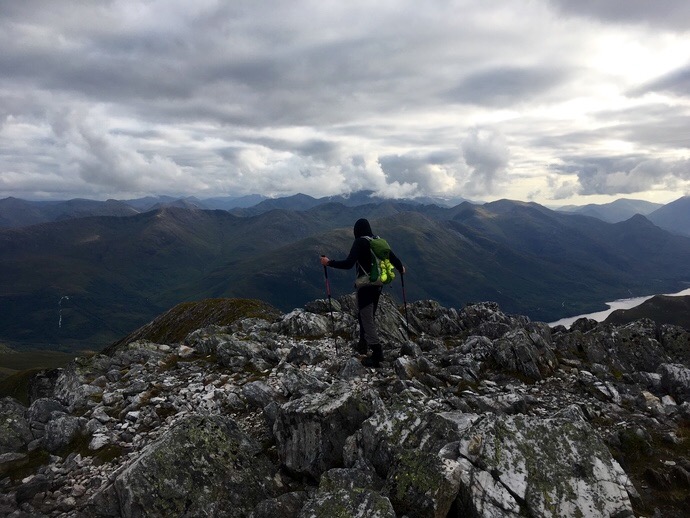 We crossed over Allt Leacann na Fair, continuing down between the two burns, the route started to get steeper so crossed back onto the right hand side of the Allt, then crossed back and forward at least twice more to avoid the steepest ground before we eventually rejoined the main path.
Walking back towards Kinlochleven, enjoying the views along the Loch, I was feeling rather sad that we have probably have explored most of the routes in this part of the Mamores and probably won't be back to these hill for a while. Although I am sure we will won't be able to stay away for long! 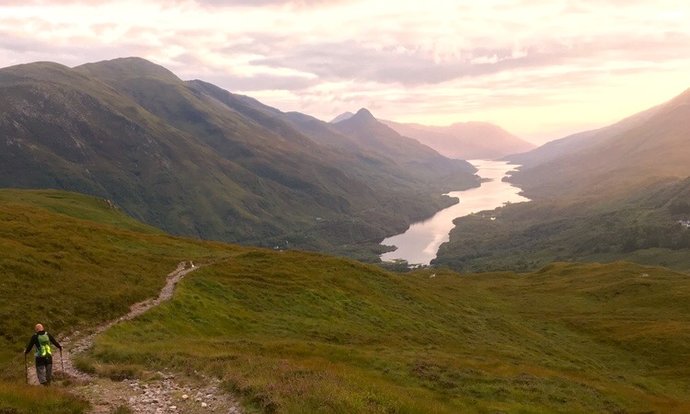