After a 5 month hiatus from the hills I used my wife's attandance at the Blair Horse Trials to explore somewhere new. I'd not climbed any of the Tarf and Tilt hills so I had a wide field to choose from. Since we were parking in Blair Atholl anyway I narrowed the choice to Beinn a'Ghlo or Beinn Dearg and feeling optimistic I decided to attempt the 3 Munros of the former and to follow the route set out by Cameron McNeish in his Munros book (Mistake 1).

The route is up Glen Tilt to Balaneasie cottage then SSE up the steep NNW ridge to Carn Liath, then onto Braigh Coire Chruinn bhalgain before a descent and ascent up to Carn nan Gabhar and back north off that into Glen Tilt. To make the trip easier and quicker I arranged to hire a bike from Blair Atholl bike hire for £20. I'd previously done something similar to get to Mount Keen in March and it was a wonderful return after descending the hill.

The trip started inopportunely half way down the A90 from Aberdeen when I realised I'd not put the insoles back in my walking boots. This meant a delayed start the following day as I travelled to Pitlochry to buy a replacement pair when the shops opened at 9 (Needless Expense 1).

The guys at Blair Atholl bikes were great and accommodated my delay despite being busy themselves doing Segway rides to the punters at the horse show and I was on my way up Glen Tilt by 10am. It was a beautiful day and warmer than I expected necessitating a quick change into shorts after a mile. It's about 8km to Balaneasie so I was feeling pretty pleased with myself as I moved up the Glen much faster than walking pace. That is until on the approach up to Marble Lodge there was a crunching clank and suddenly I had no pedal power. I thought the chain had come off and on stopping saw that it had, but then so too had the derailleur- sheered right off the bike frame 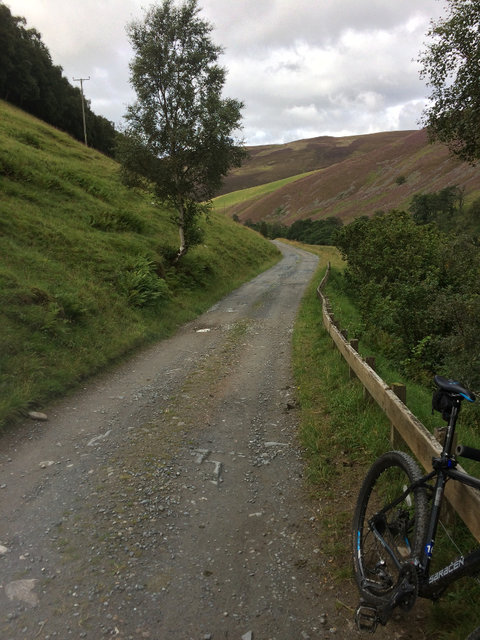 The gradual ascent where the bike broke

. I'm not a bike expert by any means but it was clear to me that it was not repairable without a replacement part. As a non-expert I had no idea how much that part would cost or how easy it would be to repair so I feared the worst and Needless Expense 2 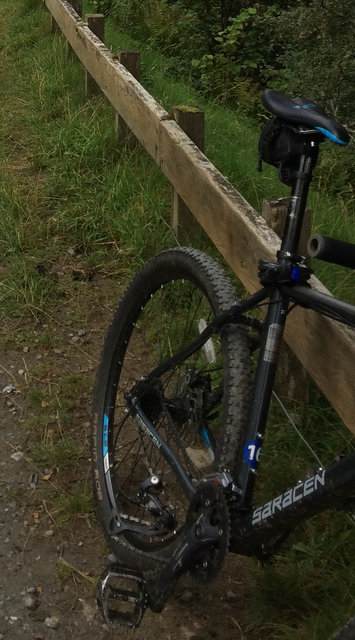 I decided I could probably still get some hills in so left the bike locked at the side of the road and set off the last kilometre to Balaneasie cottage off the Glen Tilt road and up the easterly path on the south side of the River Tilt. Balaneasie cottage was soon in site so I took a bearing towards Beinn Mhaol and struck off SSE. It is a steep ascent, the ground is thick heather and a bit boggy and so Mistake 2 - I adjusted my route away from Beinn Mhaol and towards the ridge from Creag-choinnich Lodge, then when that looked steeper on a approach I adjusted it back.I know there is a technique of zigzagging up hills but I took it to extremes. To cut a long story short it took me 3 hours to make it up Carn Liath, with frequent stops as it became clear I wasn't nearly as fit as I had hoped and some earlier midweek exercise had strained my legs so that I got cramp in various leg muscles for the first time in my life on a hill. Having not long ago turned 40 that could indicate I am now over the metaphorical hill!

The weather was glorious and walking up from Glen Tilt meant I was shielded from the wind for most of the day. 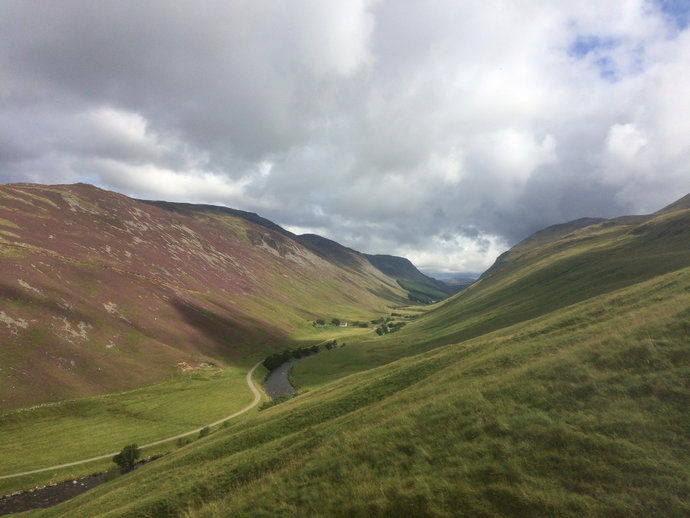 The view up Glen Tilt east of Balaneasie cottage

But with the cramps, summitting far later than planned (2pm) and with a long slog back to the broken bike and out of Glen Tilt I decided one hill was enough.

The view from the top was clear and anyone who has ever been up will know how beautiful that is. 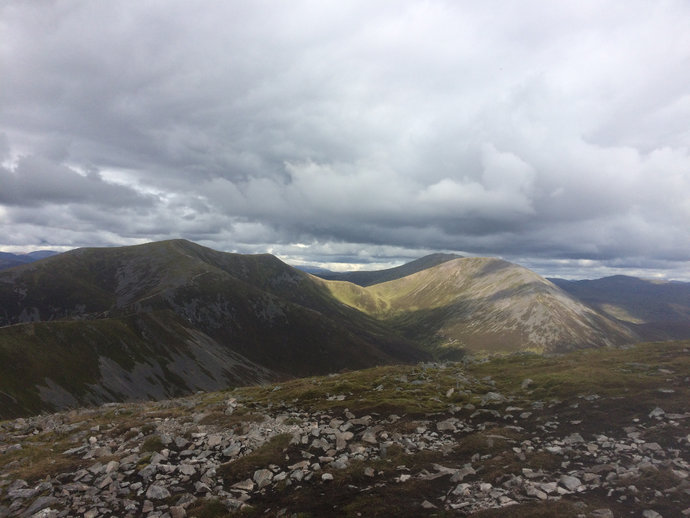 The view north north east from the summit of Carn Liath

If I hadn't been quite so disheartened with how the day had gone I would have lingered longer. So after wrapping up to keep the wind off, munching half a sandwich and a banana, and congratulating someone bagging her first Munro, I headed back down the way I had come.

Downhill was another slog but thankfully took only half the time. I made it back to the bike by 3.30pm. There I managed to use the lock to attach the derailleur to the bike frame so I could free-wheel downhill. A small success for what had turned out to be a disappointing day 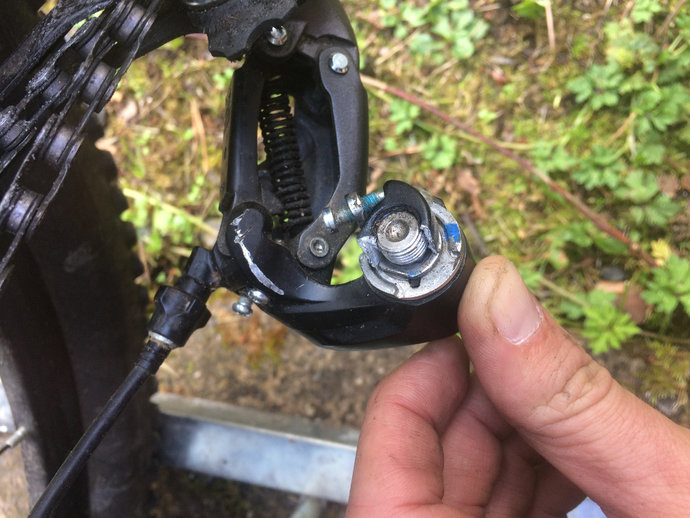 But the day improved substantially in the form of Phil - a geography teacher from one of the local schools who had been checking in with some pupils off on a Duke of Edinburgh expedition. I'd overtaken Phil when he was talking with some people only to be caught on one of the flat sections of the Glen Tilt Road. After taking a look at the bike and agreeing it couldn't be fixed much more than it currently was, Phil offered to accompany me down. The company was much appreciated, but an added boon was Phil offers to push me along the flat bits with his momentum. It was a generous offer and though I didn't want to hold him up from his day I am so glad I accepted. By freewheeling downhill and Phil's pushes along the flat (and some hills) we made it to Glen Tilt car park in 30 minutes.

Phil, if by some chance you read this then I would like to buy you a drink. I should have made the offer when we parted but I didn't want to hold you up any longer than I already had. If you're in Aberdeen anytime then send me a message.

After I locked up the bike I headed to Blair Castle to pick up my wife. There I found the Blair Atholl bike guys to apologise for breaking their bike. David's a good guy and reassured me the repair was straightforward so a bill wouldn't be coming my way. That was a weight off my shoulders and so with the sun on my back I walked through the milling equestrian crowds to find my wife. Her day had been better than mine but was also tiring so we headed back to the car and returned to Aberdeen via Dunkeld and Coupar Angus (a lovely Road if you've never driven it).

Alas, the day wasn't quite over as after arriving home and unpacking I discovered I had left my long-time hillwalking companion - my leather Australian Barmah hat - at the top of Carn Liath having used it as a shield to stop my bum getting wet. After switching to a woolly hat and cagoule for the wind I'd repacked my bag and got up without checking around me (Lesson 1 and Needless Expense 3, though actually 2). That hat had accompanied me on many walks over the last decade, come rain or shine where it excels. If you are lucky enough to find it please treat it well. Indeed if you found it and are reading this then please do let me know. I'd love to be reunited 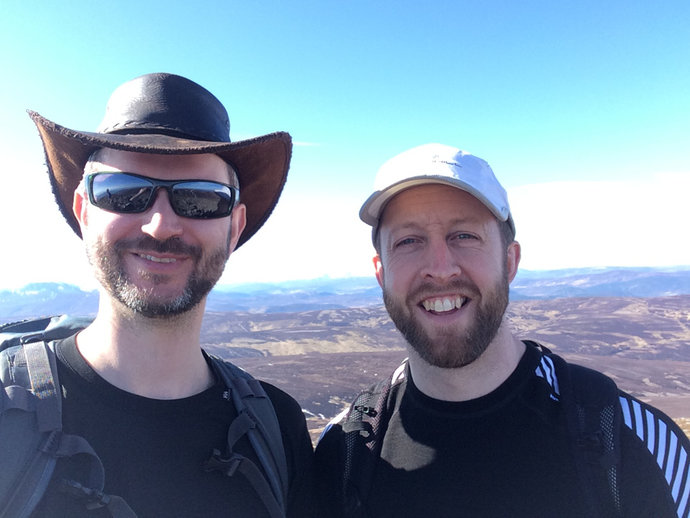 My lost hat is the Barmah leather hat on the left.

So ends my first walk report on walk Highlands. Lessons learned are:
1. Don't follow a Cameron McNeish route without checking that others have done it, and recommend it, too. I should have taken the path up from Loch Moraig like most people do.
2. Don't change your route without good reason. I probably added half an hour of walking through heavy footing for little gain.
3. Remember to check where you've been sitting when you stand up on the hill.
4. Be kind to strangers. My day was vastly improved from being on the receiving end of a stranger's kindness.

You're not over the hill at 40. Hill fitness just needs to be kept up a bit.

I'd have demanded my money back from the shop you hired the bike from never mind you offering to pay for it.

As Coop says, rubbish to being over the hill at 40. Just need to get out a bit more gradually. Try some of the wee hills in Fife if you want an enjoyable day out to build up without too much effort. Or pick and mix like I did in this report (got enthusiastic and picked them all, but you don't need to.) Or get out every week on the wee hills round Aberdeen.

A tale of misfortune, but success as well.

I've found the combination of a cycle in (even one cut short) and a day on the hill seems to make me more prone to cramp. And at 40, you're not at all necessarily on the downward slope, I am significantly fitter now at 49 than I was at 40. Though just as far from the hills unfortunately.

The bike hire company should have refunded you at least part of your hire charge, let alone not charge you for the breakage. A rear mech shearing off when simply pedaling along sounds either as if it had been previously damaged, or not properly secured and checked before you rode it.

Thank you for reading this long post and to Coop, Sgurr and Mal Grey for commenting on it. My over the hill at 40 comment was an attempt at self-deprecating humour and a bit of word play given the nature of the activity. I certainly have many more miles in me and plan to emulate my Dad who is still hillwalking at 70. 5 months is too long away so I'll be getting out again soon before the cold weather gets going.

Know the feeling with the derailleur . Been there.