Bank Holiday weekend… in spite of a less than ideal weather forecast we stepped off the ferry at 08:50am onto Rum thrilled to bits with the unexpectedly sunny Saturday morning. We admired Kinloch castle as we passed, and resisted the temptation to seek caffeine and explore the crafts shop… the hills were calling and we were on a mission! 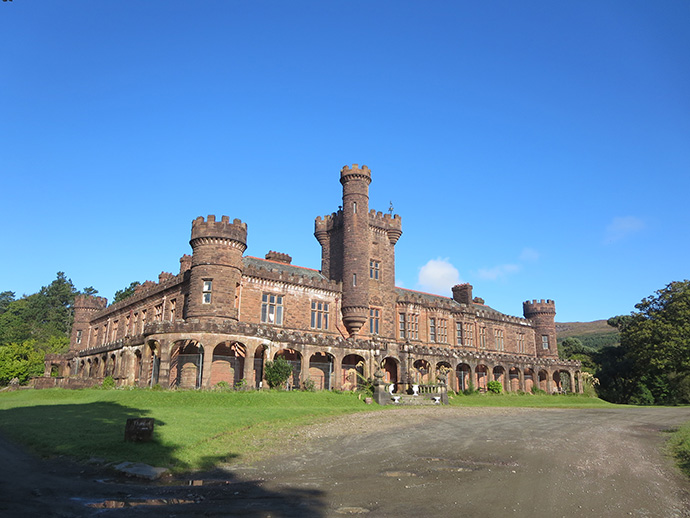 The plan was to complete the Rum Cuillin traverse with an overnight in Dibidil bothy, but armed with bivvy bags and enough food for a small to moderate army, there was plenty of scope to alter the plan as we went.
We stopped to brew up at the small dam on the Allt Slugan a'Choilich, and with impressive views already beginning to unfold, were looking forward to the walk ahead. 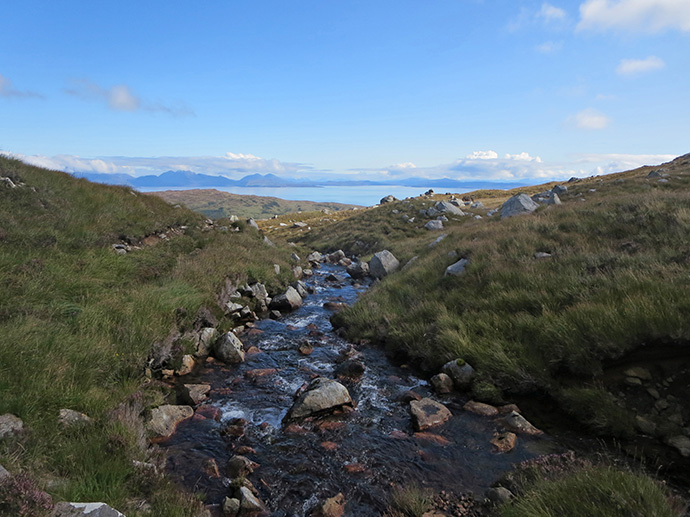 A brew with a view!

The weather miraculously continued to improve even further and the clouds that were shrouding the tops 30 minutes ago lifted before us as though to our command. 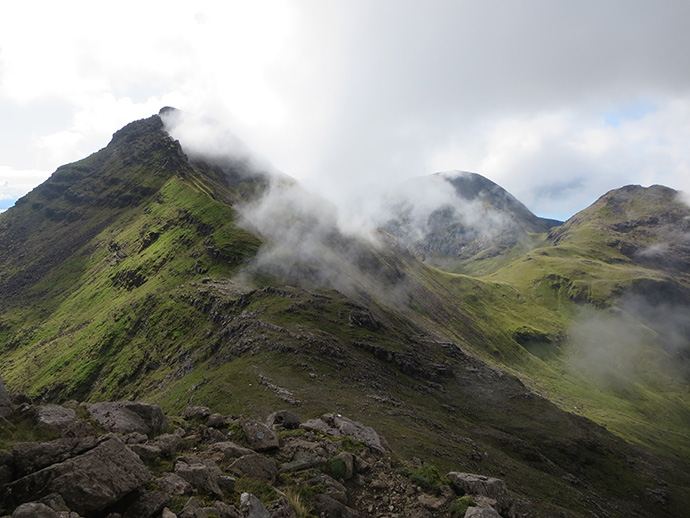 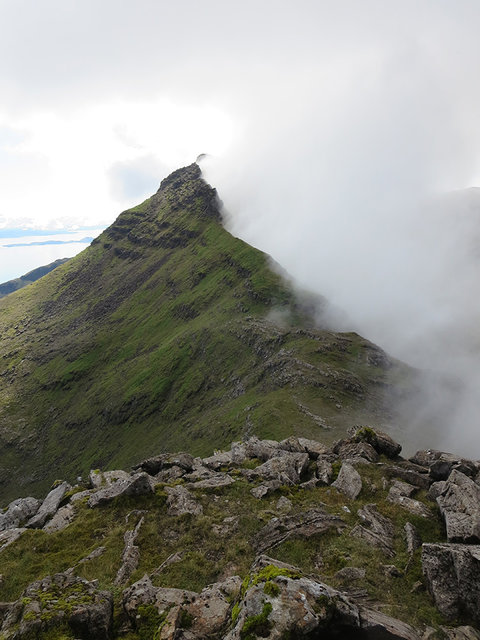 We were too late in the season to see any Manx Shearwater, just their burrows and a few sorry clumps of feathers on the ridge and happily there were just a few benign midges, not the infamous swarms those familiar with Rum were gleefully telling us about.

Being a bit too early to forage for cloudberries we made our way up to the first summit of the day. The views from the tops were stunning… a walk with 360 degree views of Harris, Muick, Eigg, the mainland, and Skye is going to be hard to beat. We lingered briefly on the summit of Hallival to soak in those views and the sunshine, had a bite to eat, and then it was on towards Askival. Unsure of how “doable” the ridge line was as a scramble, and Askival’s Pinnacle looking somewhat imposing, we opted to follow the path off to the left for a short while before cutting back up onto the ridge. 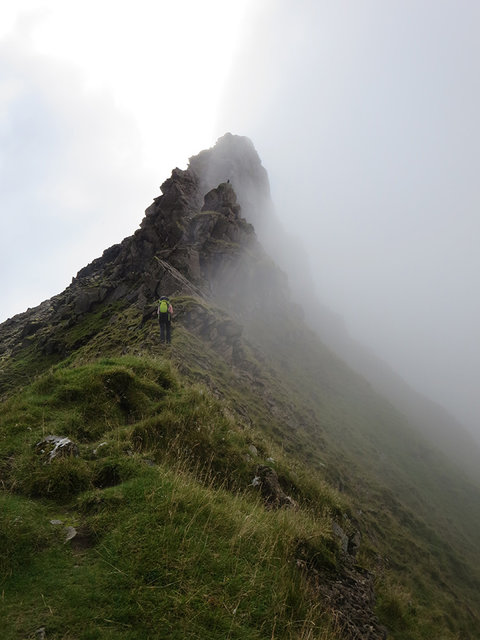 At the summit of Askival we once again paused to enjoy those incredible views and have second lunch (well, we did bring enough food for an army and are very much like Hobbits in our thinking when it comes to food

). The descent to Bealach an Oir was indeed long and tiring. We considered a bivvy here for the evening, but since it was still early afternoon and with a fair amount yet to do, we chose to continue on. The dual peaked Trollabhal was definitely a favourite of the day with some pleasant scrambling to be had. 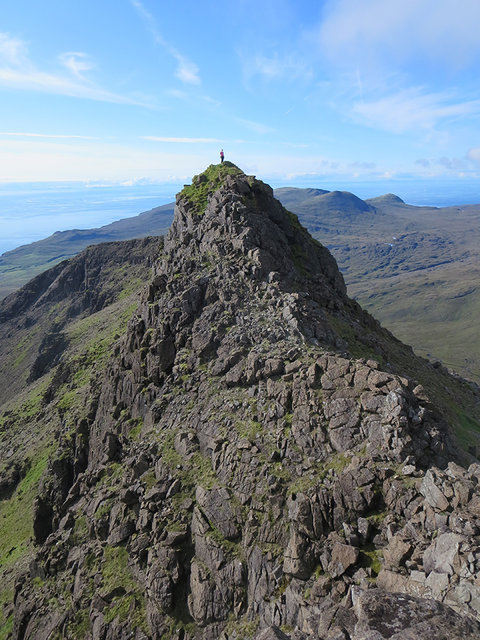 View from the Western summit 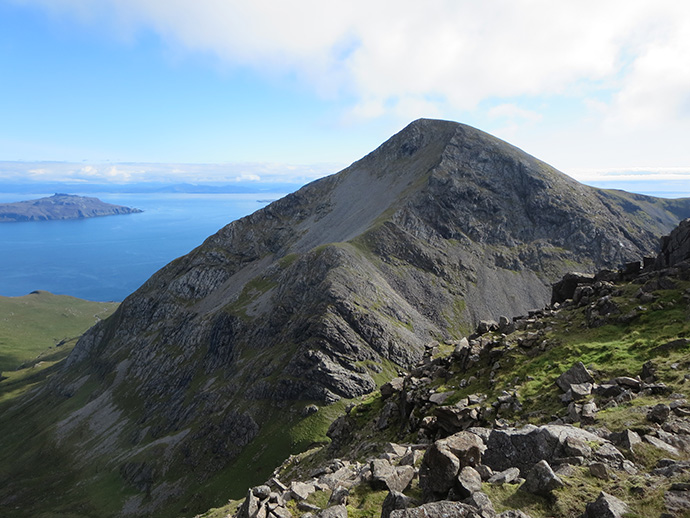 Any hopes that the ascent up Ainshval would be less draining that it looked were swiftly dispelled as we as began the gruelling slog upwards. Up above us, a long horned, long haired goat and her kid watched our pathetic progress with disdain. 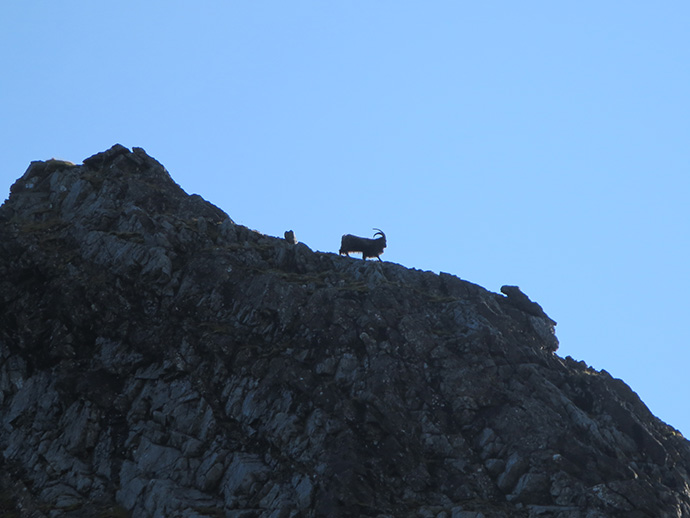 Stared at us for a while then walked off in disgust! :)


Having convinced ourselves that it would be an easy scamper along a mainly horizontal ridge to the next top, we were both very dismayed and indignant to be confronted with the next sharp descent and corresponding ascent! 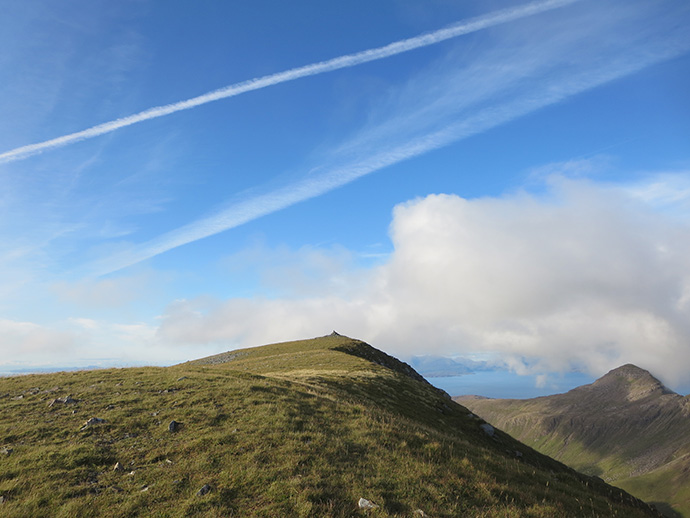 Looking back at the summit of Ainshval 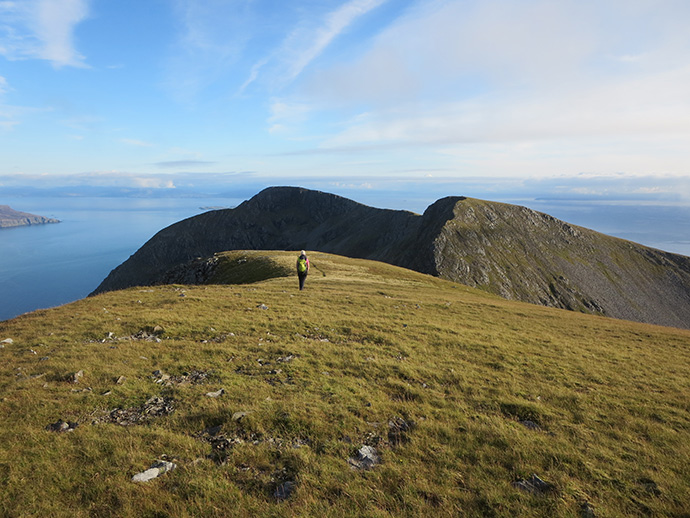 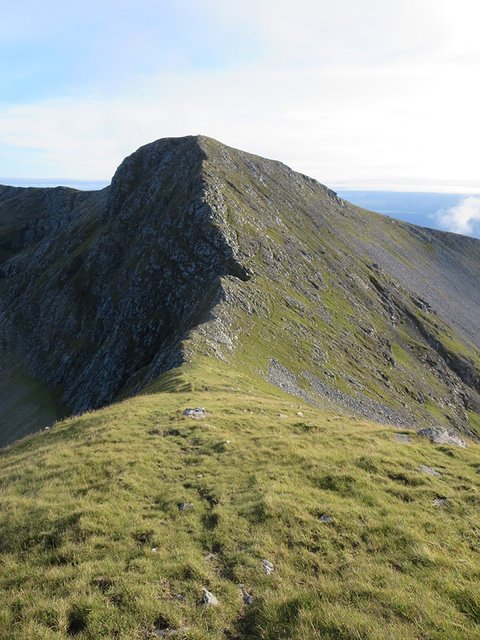 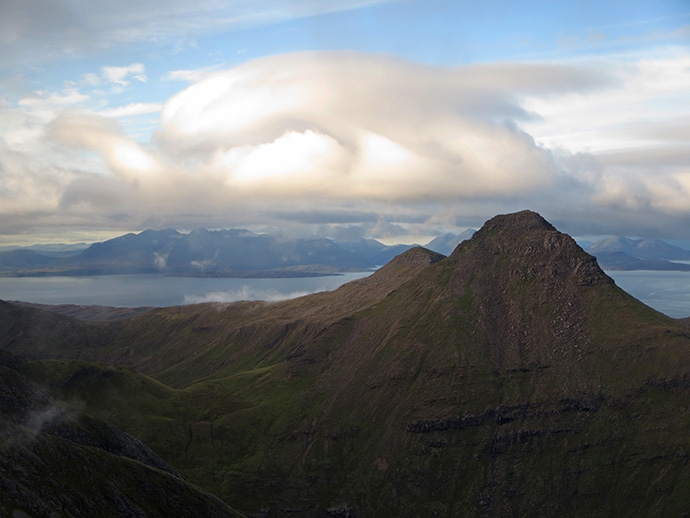 The Cuillin on Skye in the background

This time, however, the ascent up to the next top proved to be far less tiring that it looked and a pleasant scamper along the ridge line brought us to the top
A gentle ascent soon brought us to the final summit of the day – Sgurr Nan Gillian – and with some sea mist starting to roll in, we didn’t tarry too long, but started our descent downwards. 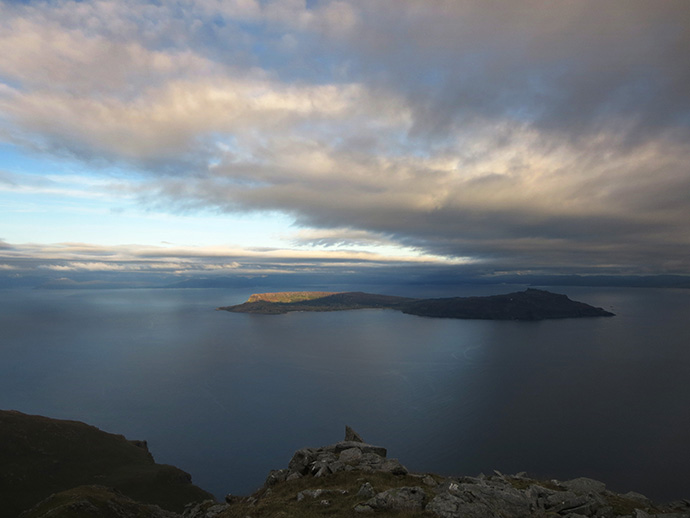 Eigg from the summit of Sgurr nan Gillean 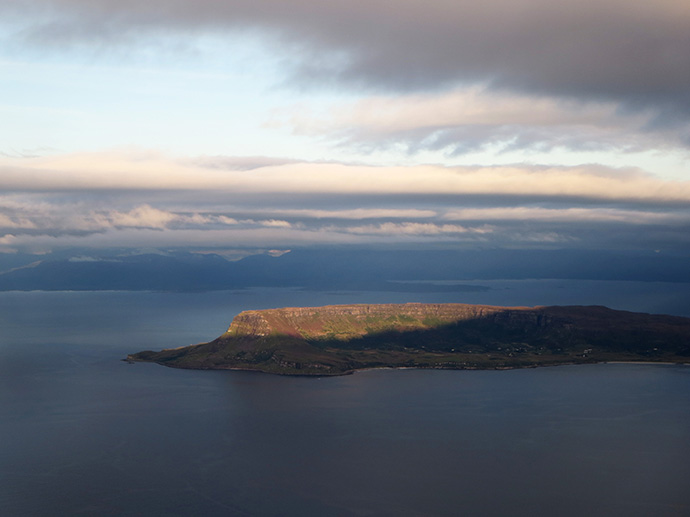 The last rays of sunshine..

The gentle descent gradually steepened and it seemed to take an interminable age before we finally slipped and slid down the increasingly boggy terrain to reach the welcome comfort of Dibidil bothy as the last vestiges of daylight slipped into darkness. 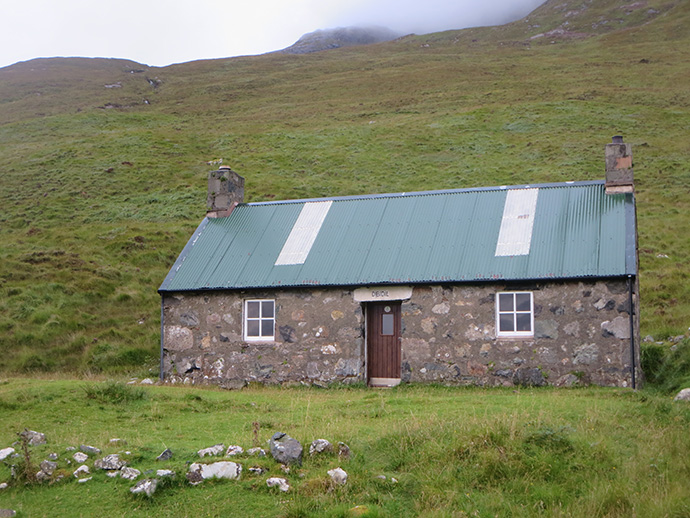 We had the bothy to ourselves, and after a good night’s sleep and a far too comfortable lazy breakfast, the boggy tedious walkout was completed in a blur as we raced to make the 10:45 am ferry… as we sighted the boat steaming in while still over a mile away our pace picked up faster and faster until we dropped onto the road and tore towards the pier at a flat out sprint. We made it…just…only by the generosity of the ferry staff who having just raised the ramp, lowered it again… if only to get the two crazy bog covered ladies off their island!

Spectacular! (Even Rum in the sun doesn't come without some clag!)