So I Txt my mother, whose initials, DB, I'd seen atop my phone's screen. Only I hadn't seen my mum's had I? No, it was my Boss, also DB. Much ridicule ensued. Great start to the day....

Heading north out of Edinburgh I enjoyed being one of the first to cross our shiny new bridge, the SatNav was thoroughly baffled, and got very annoyed I wasn't obeying her! A very nice bridge it is too!

What a glorious day it was becoming, a few scattered clouds offered a little shade every now and again, you wouldn't believe it was a day before Autumn begins. For such a beautiful appearance, it is a shame that the walk is a little uneventful. The path that has been laid is a great piece of work. The boulder fields which cover the last third of the assent, however, are a really nasty piece of work! 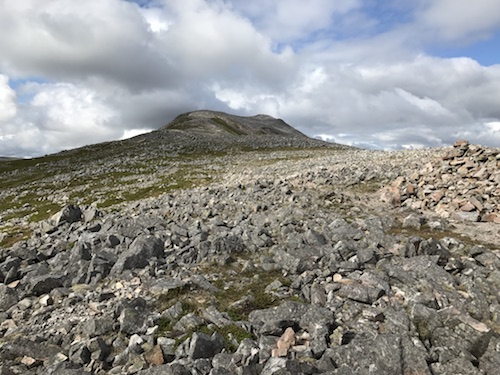 When I eventually reached the summit I became all to aware of what all the fuss is about! A really stunning top, enjoyably slightly craggy (reminded me a little of a miniature Tryfan)(not a great comparison I appreciate, but I was having one of 'those' days). The views are extensive, with famous vitas at every angle. Hard to better these views! Clouds starting to gather....

The journey down was simple enough, the journey home however was anything but, taking very nearly four hours, double what it should have done! I'll stick to walking in future.