Mosedale, the High Stile ridge, and the no good very bad day

Mosedale, the High Stile ridge, and the no good very bad day


Morning in Buttermere, and I was started on a plan which I'd been looking forward to for a while, a crossing of the hills which would leave me at Black Sail, to walk out again in the morning - a plan which had to take place over 3 days, since there was never any availability at Black Sail on a Saturday night!

The original plan had been for a fairly short crossing, up by Bleaberry Tarn to Red Pike and along the ridge as far as Haystacks - but now I had unfinished business from the day before. Looking up to Bleaberry Tarn from Buttermere

So having wasted time hunting around the village for anywhere that might sell plasters (I had blue hostel ones on both heels, but didn't think they would last very long), I set off for Mosedale, to visit the famous tree.

As far as the foot of Melbreak I was following a path I'd been over before, but from there I kept on up towards the Floutern pass, with the cone of Floutern Kop marking the top, until it was time to turn off for Mosedale. I wasn't sure what to expect from Mosedale, but the path ran along the side of the valley well above the flat base (which probably was pretty wet) and was a good easy walk. This was one of those odd places that I'd wanted to go to without having any particular reason for it, so I was quite pleased that revising my plans had taken me there - when things go wrong they usually do end up with me getting to go somewhere I otherwise wouldn't have done, which may be why they go wrong so much... 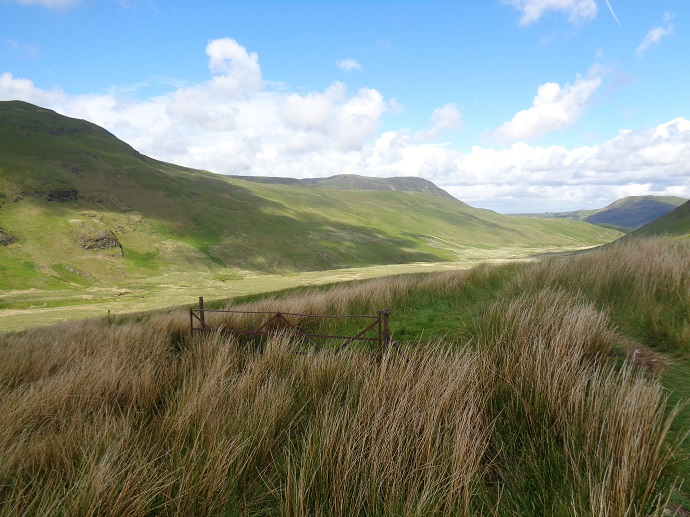 The tree did look a bit out of place, but it didn't seem to mind being the only one and was obviously flourishing. 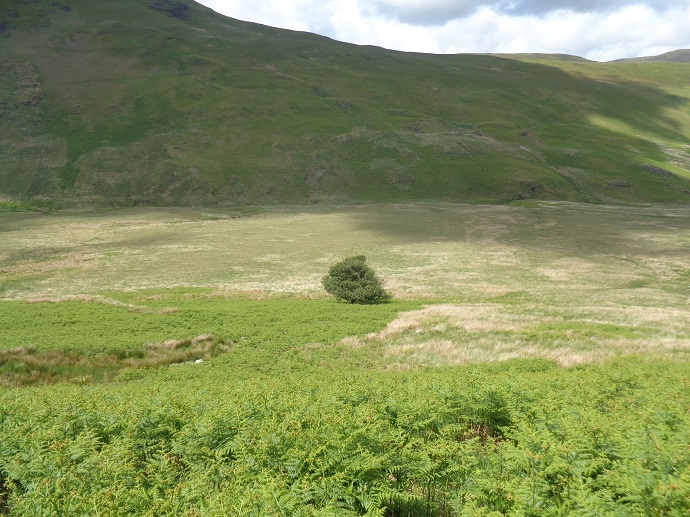 At the far end of the valley (where there were more trees), I left the track and turned up by the fence towards the top of the Hen Comb Ridge - here at its low end. I was definitely doing a long way round, as the ridge would take me back most of the way I'd come, just a bit higher up. That first climb onto the ridge was probably the hardest part of the hill - once up, the ridge was fairly flat before another climb over the shoulder of Little Dodd, and another flatter place before the last climb to the summit. The summit had nice middle-of-everything views - over Mellbreak to Grasmoor, Starling Dodd and a fairly end on view of the rest of the ridge, and the other Loweswater hills, but especially up over Buttermere. 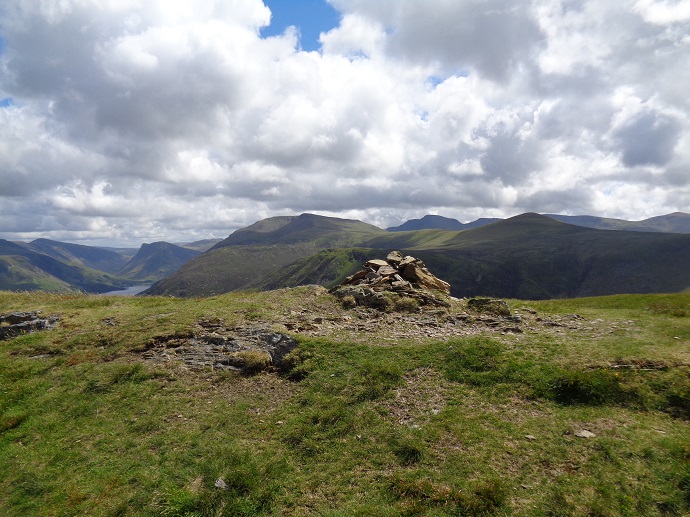 Back down the pass

In the base of the valley the path wound along more or less by the stream, with some surprisingly red rocks in the bed - or maybe not surprisingly, since I was now at the foot of Red Pike - and then along the foot of Gale Fell and above the fence to Scale Force, suddenly busy with a whole party, and the first busy place I'd been all day.

The only problem now was the time, as it was well into the afternoon - I love the middle-of-nowhere hostels in theory - and in practice - but they have one serious drawback for me, which is a fixed 7pm dinner time. I'm just not that kind of walker, at least not on a summer Saturday - I'm slow and distractable and love the evening on the hills, and so tend to drift along using all the light I can.

As the crow flies I didn't even have all that far to go, but the climb up onto Red Pike was slow and endless, I think partly because it was fairly featureless. The first part, up above the waterfalls in the gorge and then following the burn, was a lovely place, but tucked into a narrow valley with no views around. I missed entirely the path which was supposedly clearer, possibly because I was looking out for a clambery place rather than a junction, and so followed the second path by the tributary burn, and then on up a slow broad slope, still with very little to give me any sense of progress, until I suddenly met the bigger path along Limbcomb edge, with a dramatic view down to Buttermere below. The edge was a stunning but slightly precarious place in the wind, and I eventually had to slip a bit uphill from the path where it came a bit too close for comfort to the drop - but I couldn't complain now about not having a good view of everything around me. The other side of the ridge was completely different - the broad slope down to Ennerdale which I'd climbed, although not so high, on my way to Starling Dodd.

The summit of Red Pike is genuinely red, which is pleasing, and the views were good, especially the full length view up Crummock Water. Crummock Water and the north

Going on along the ridge I now also had a view of the hills to the other side of Ennerdale. From the dip on the far side of the summit I had a view down to Bleaberry Tarn, a place I was kind of sorry not to visit. The next summit wasn't far, less than a mile although about half an hour's walk, and marked by two cairns at the top of a rocky rise. I would have made the detour to the Hewitt summit if I had realised it was definitely different, but on the ground the spur really didn't look any higher, and I wasn't spending time prowling for the sake of it.

This was the top of the ridge, but although it was mostly downhill from here it wasn't necessarily getting easier. The way to High Stile was a bit longer, a full mile, and looked longer still, winding along a narrow ridge. The ridge to High Crag

High Stile is the end of the ridge, or at least of the higher part before it drops to Scarth Gap and climbs again, and the views are quite different from here - not that there isn't still a good view north, but the things which draw your attention are the head of Ennerdale, and Fleetwith Pike over Warnscale Bottom. 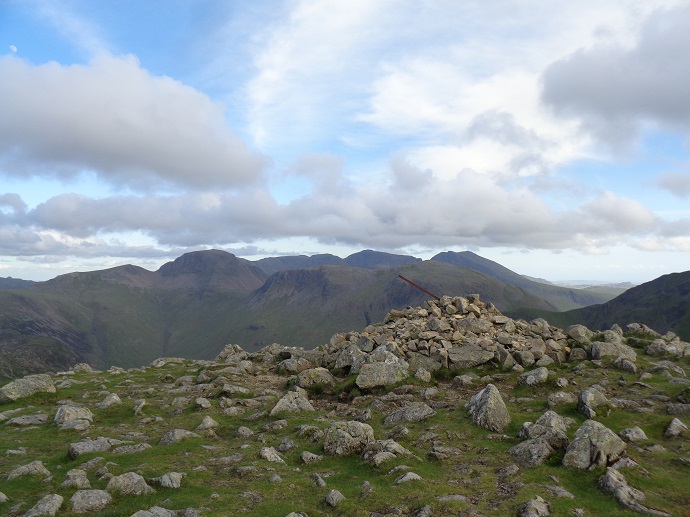 I could see the whole way down now, and the end of my journey, but it was a long way down in quite a short way. The head of Ennerdale

The first part of the descent was the worst, over a long streak of loose stones - a definite zigzag path had been built into them, but it was still far too loose and steep in parts for me to be happy with, and I did go down some of it on my bottom, even when I met a man coming up.

Below Gamlin End a grassy path led down to more rocks over Seat, which was more of a climb up and down than I had expected, but at least mostly solid. I got to the head of the pass about 5 to 7, which was better than I'd hoped at one point, although I didn't have time to do more than look up at Haystacks. The way down the pass was easier, especially where it was stepped, down to meet the forest fence and follow it down to the track. Then not much further to hurry up the valley and eat my belated dinner, and spend as much of the evening as I could sitting on the bench outside the hostel and looking up at the hills. 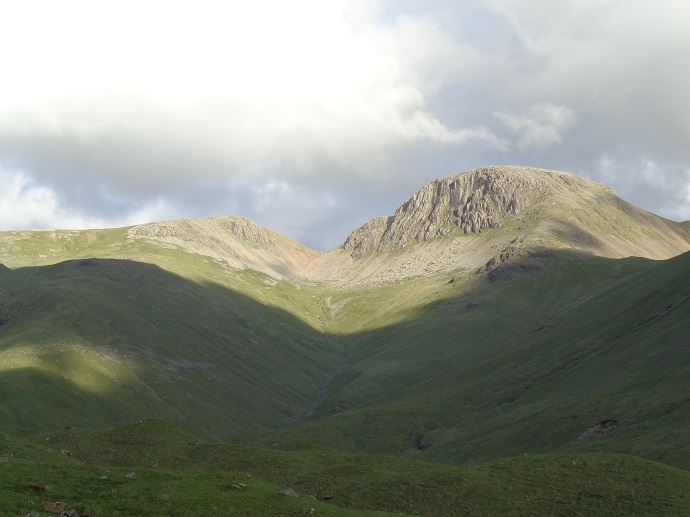 The only cloud over the journey - more or less literally - had been a very bad forecast for Monday, which had looked fairly impossible through Sunday. But just at the end of the evening the first clouds were moving in, and when I woke in the night the wind was howling around, and by the morning it was wet and cloudy and dull, and cows were sheltering under the tree just outside my door, which I wasn't very happy about.

I'm Scottish and don't melt, and I walk in the rain happily enough if I have to - long distance, or to get out of the wilds, or if the skies open while I'm out - but apart from safety in the mist there didn't seem any point in heading for the high hills when I couldn't see them, especially when Great Gable is supposed to be one of those hills you should appreciate. So I packed up slowly and headed for the pass, with the option of a detour to the top of Haystacks if the weather didn't get any worse, because at first it was the kind of hanging in the air wet which it feels quite nice to be protected against.

But it did get worse, a dismal trudge, the kind of day when you end up drinking pints of rain as it runs down your face, and water pouring down the path on both sides of the pass, and I just slinked down to Gatesgarth, where a long wait in a doorway eventually took me onto a bus to Borrowdale and tea and cake and a slight drying off, and another bus to Keswick for a late lunch, where of course it dried up in spite of the forecast and became quite a nice afternoon, but by then I felt that pottering down to the lakeside was adventure enough. Re: Mosedale, the High Stile ridge, and the no good very bad

You certainly made the most of the good day. Nice to see the views on the High Stile ridge I've been denied on both my visits

I'll just have to go back again then

Re: Mosedale, the High Stile ridge, and the no good very bad

The Sunday afternoon was absolutely gorgeous - it was almost impossible to believe that Monday's forecast could be right, but sadly it was!

I need to go back too, since I've got a Hewitt summit still to claim, but I'm not really complaining