Ben Mor Coigach is a special place for me. For one thing, because it's not one of the iconic hills, it gives you a chance to look at the iconic ones. For another, I've always loved the way it looms down over Ullapool and Ardmair like a great black angry beast (or McCaig's "Wagnerian devil") and yet up on top, the Garbh Choireachan ridge is surprisingly friendly and golden!

So it was a bit disappointing last year when I was up there with some other folk and we didn't set foot on the ridge - just went to the summit cairn and came down again.

Anyway, I suppose that gave me a good excuse to come up here again without anyone else this time. And I'm glad I did - it was more like my first visit back in c. 1991.

The drive there was a bit bonkers though. All of Assynt was bathed in sunshine, except this little corner beyond Achiltibuie. Here, and only here, black clouds were grumpily skulking. "Pah! They'll lift", I decided.

I donned my gaiters, waterproof trousers and jacket and was about to head off when a car pulled up. Out got a chap with two dogs, from Inverness, just wanting to check where he was and then which way I was going up. He'd been planning to climb up the nose of Garbh Choireachan. He got out the various bits of paper he'd printed off from the internet. "It says there should be a significant gorge." I pointed out the massively significant gorge: "There, to the left of Ben Mor Coigach's ridge." "Is that the way you're going?" "No, I'm going to handrail this gorge and go up Fhidhleir first." In the end, after a tale of broken clutch-pedals and car-recovery by the AA, he decided to follow me. "I've still got to get my boots on, so don't let me hold you up."

So, at a distance, I suppose I started to lead the way! I started off through the heather, surprising a snipe who flew up, but then realised it'd be easier to go to the bridge and start just below that. Fox-moth caterpillars move much more slowly than surprised snipe, so here's one: 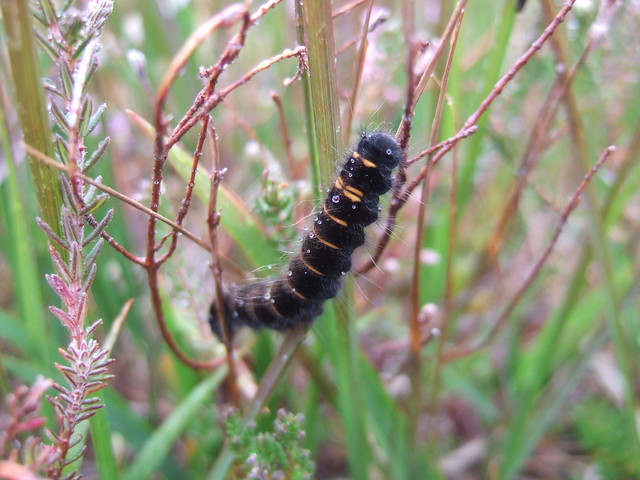 and a common frog (seems such a shame when something has such beautifully striking golden eyes that it's called a common anything, but there we are - don't suppose it cares). 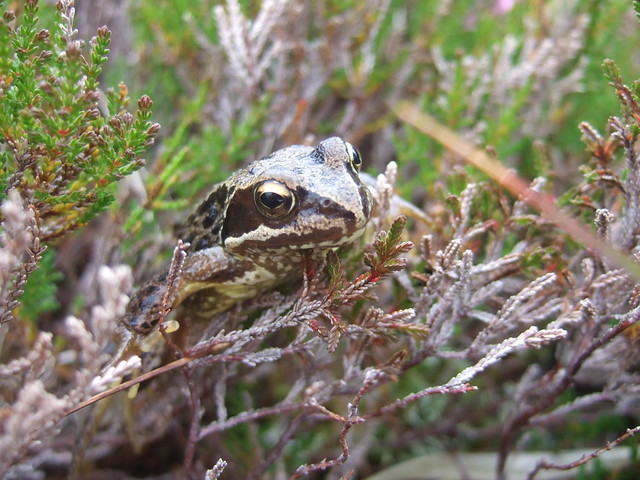 As Fhidhleir's top got nearer, I could see a small flock of grouse, and then a flock of something else wheeled away. For some reason I can't now remember (rain?), I hadn't taken my binos with me, so I don't know if they were redshank or greenshank. They looked and sounded like redshank. Anyone able to put me right, go for it 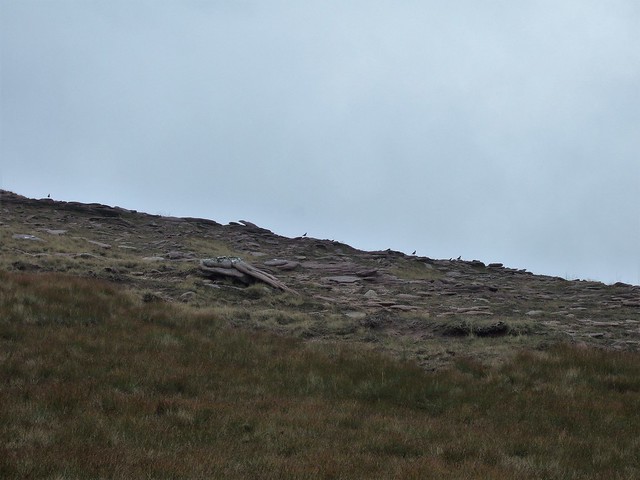 Nice to be up out of the sloggy bit and on to the rock anyway. 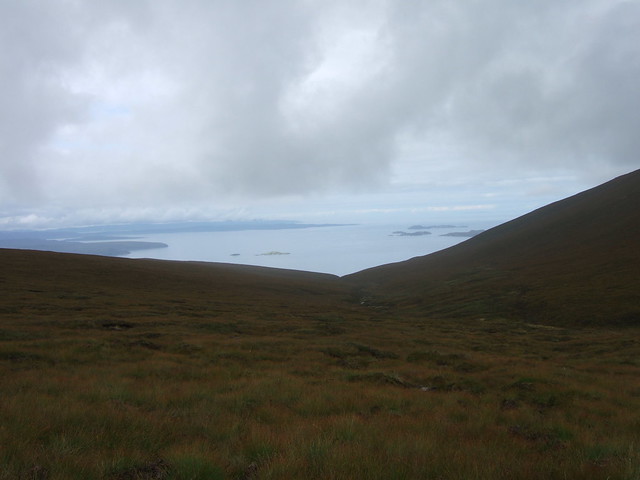 Though the cloud on BMC wasn't looking like it wanted to shift... 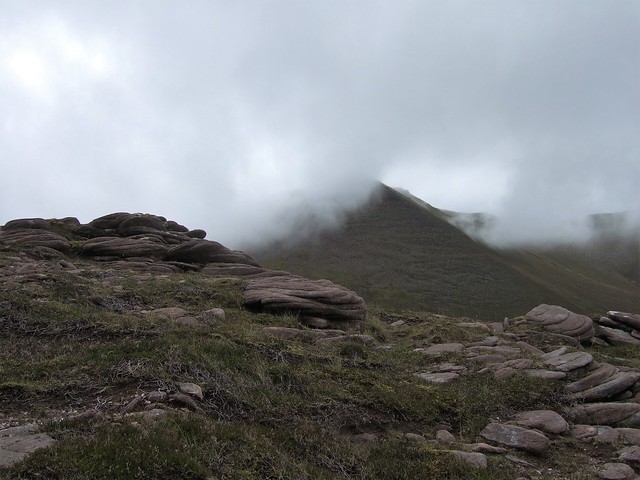 At the top, what should be a breath-taking view from Fhidhleir's brilliant, oddly small, middle-of-nowhere summit point, with the land dropping away from you on what feels like all sides, was instead almost identical to last year (1 August then). Bright bell heather over Lochan Tuath... 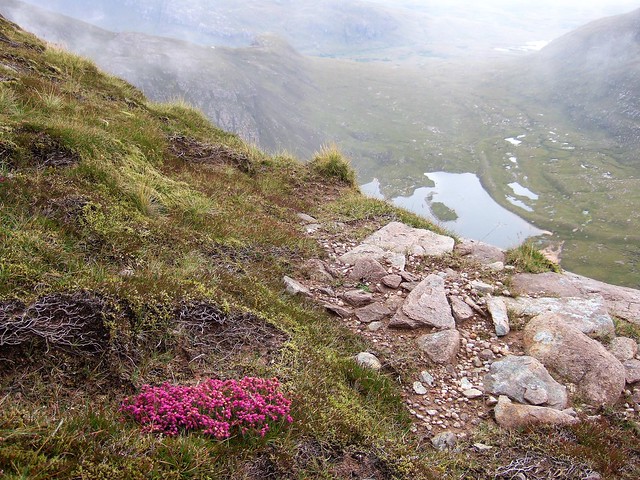 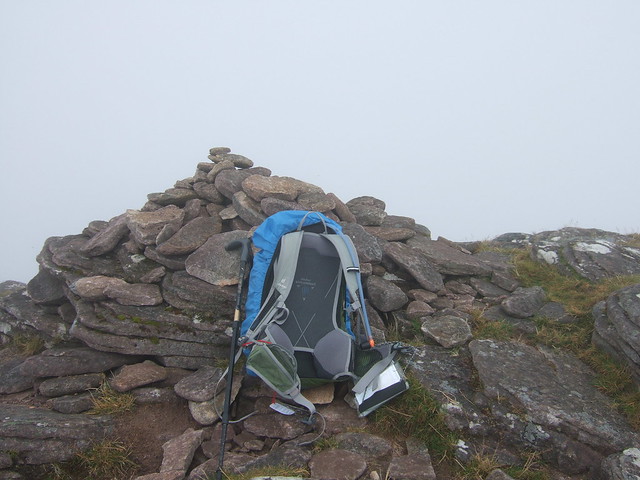 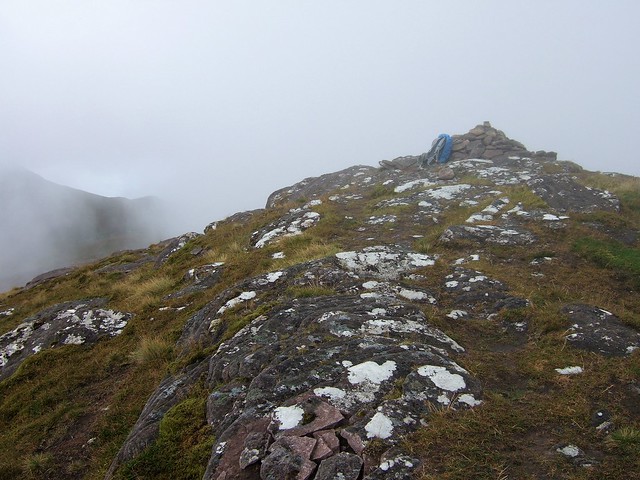 and then Ooh!! What would you call it? Just a double rainbow - it was awful tiny and cute and just hanging off the edge of the summit cairn!

I hung around, hoping the cloud might lift, and also just checking the fella with the dogs was ok. Dog number 1 appeared eventually, then dog no.2 and finally, himself. "Come away from the edge, Islay!" he said to his spaniel. "Ooh, that's quite hard-going up, isn't it. Come away from the edge! And you Jessie! Makes me so nervous when they do that." I was invited to give each dog a treat - which meant they licked off my Smidge - and then we all headed off for BMC. He started to tell me which way I should go, but that was really annoying, so I surreptitiously drifted away over the plateau and we headed up to BMC separately.

No kids chucking stones this time

In fact almost no one else at all. 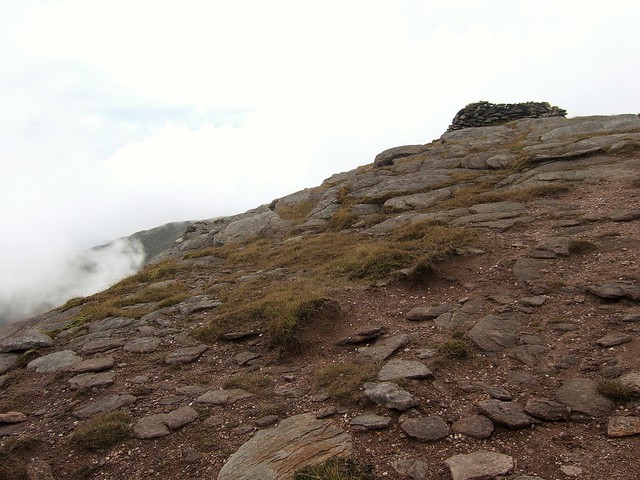 A group of four were coming off and heading over to Fhidhleir. There was no one at all on Garbh Choireachan though. And the sun was making an effort over there too. So off I went with a spring in my step. 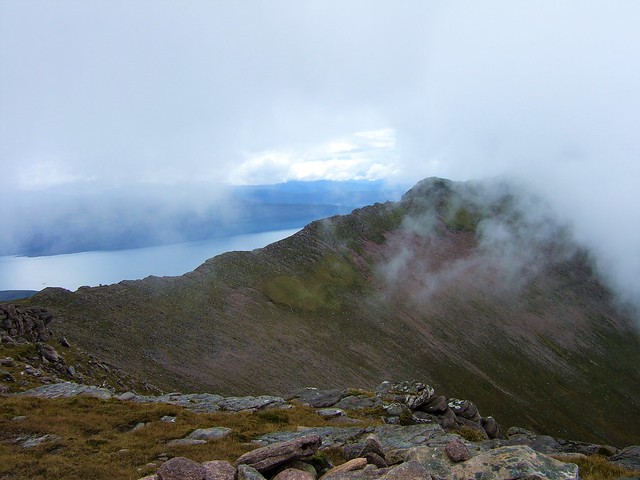 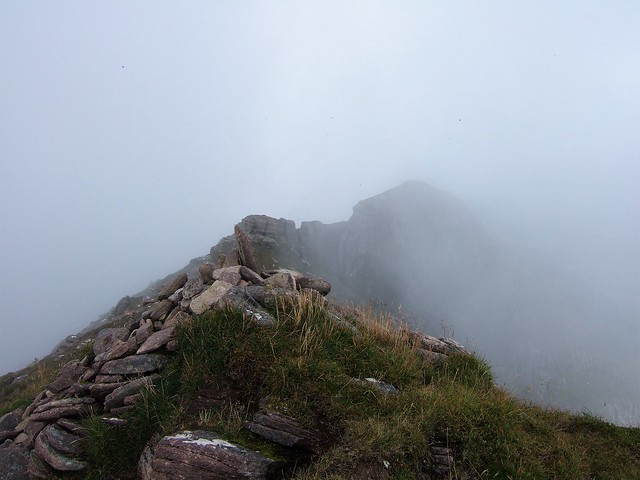 And, from the first glint of sunshine on the waves below, it just got better and better. I scrambled, gazed, lunched, peered, smiled, and soaked up the sun, enjoying the Summer Isles living up to their name, as they had the first time I was up here, and the views down Loch Broom, over to An Teallach and out to Skye and the Hebrides. 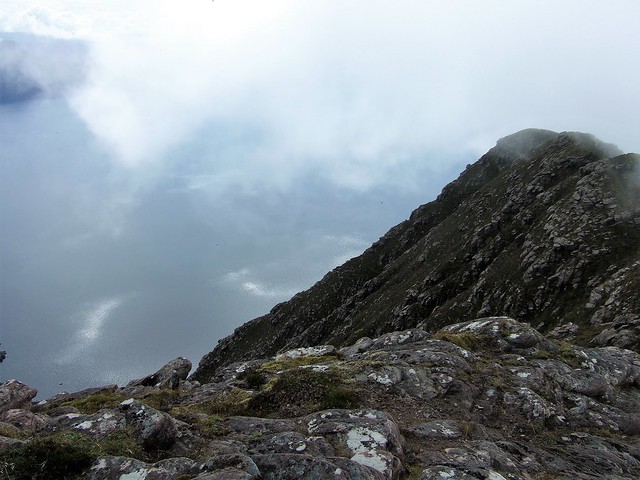 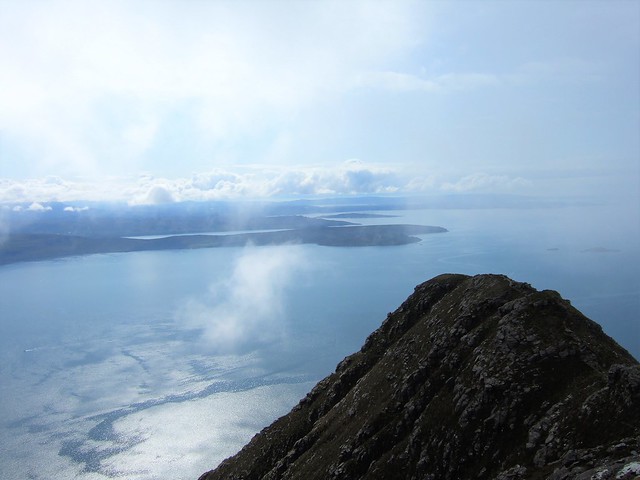 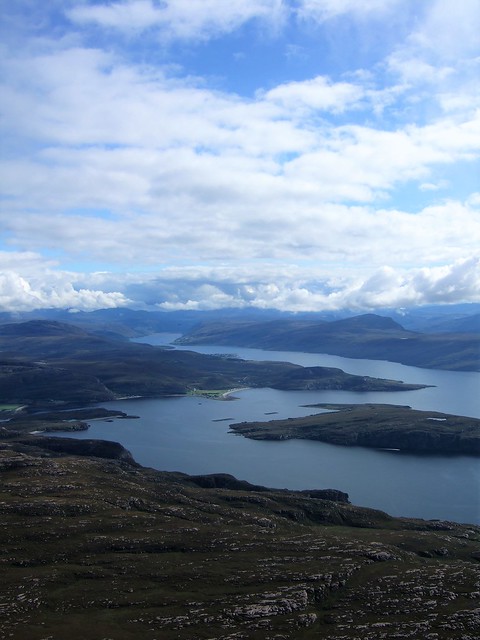 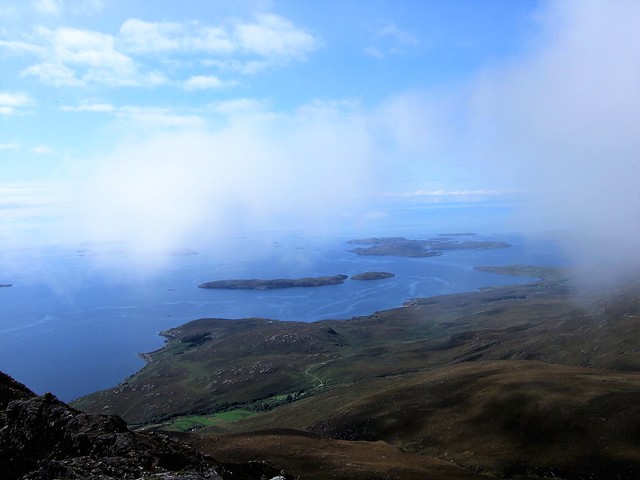 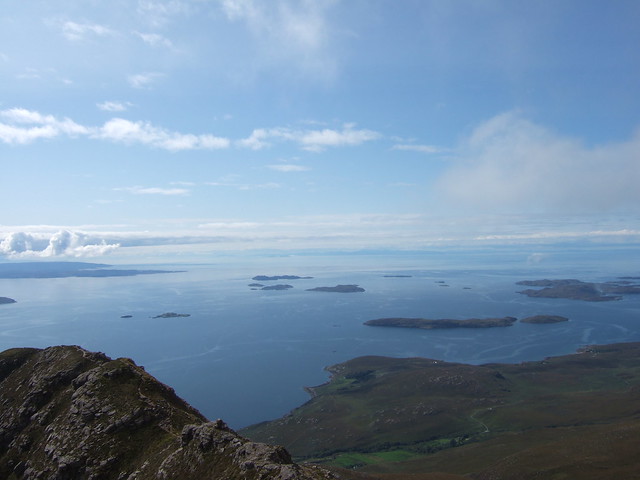 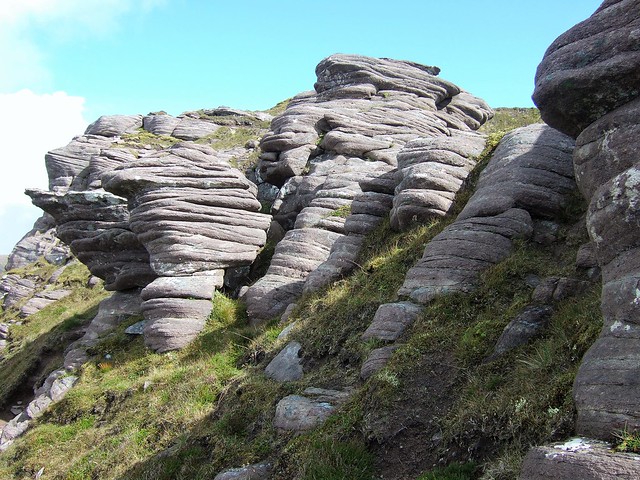 Finally, I pulled myself away and as I came back I ran into the fella with the dogs, just starting out on the ridge. He decided not to walk it though, because of the dogs - so I'm so glad he did follow me and not try to go up that way!

He descended there, but I headed back towards the summit plateau, to see if the clouds had shifted off Fhidhleir yet and whether I could see Stac Pollaidh, Suilven and friends. 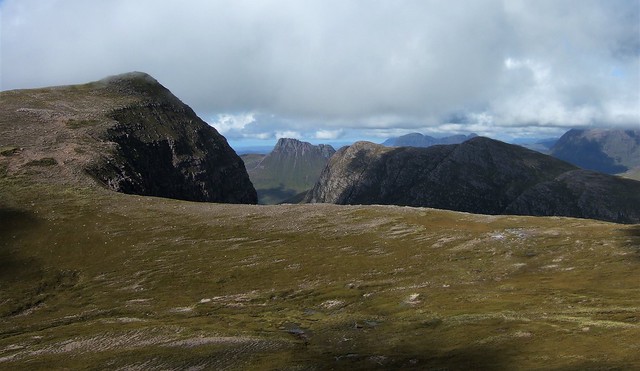 On the way down, a lizard ran out on to a rock for a moment, again too fast - like the snipe - for a photo. But I've never seen one on here before, so that was a treat. Last year, one of our party found an eagle-feather (sea-eagle it looked like but could have been golden), so I had my eyes peeled for raptors on the way down, now there was some visibility. No cigar today. The lizard - and raven feather I found above where I'd left the car - were to be the consolation prizes!

Good to see the little things catch your eye on your walks,
just as much as the grand views...

That actually looks like a broken spectre rather than a double rainbow, never seen one myself, but would love to get a photo.

Lovely report of a special hill.

Yep thats a brocken spectre, had plenty of those on Liathach one year

, but some folk never seen them. Was ages before I saw my first fogbow, yep I had to check it when i got home

onsen wrote:Good to see the little things catch your eye on your walks,
just as much as the grand views...

Jokester wrote:That actually looks like a broken spectre rather than a double rainbow, never seen one myself, but would love to get a photo.

Yep thats a brocken spectre, had plenty of those on Liathach one year

, but some folk never seen them. Was ages before I saw my first fogbow, yep I had to check it when i got home

Whee - thank you so much, folks. I love learning this stuff from you guys!
Nature IS great.