Easy Vorlich, then something a little more interesting

Easy Vorlich, then something a little more interesting


Ben Vorlich was one of the first hills we climbed after moving to Glasgow in 2014. The Loch Lomond one, that is. It was more than three years later when then weather forecast directed us to the hill with the same name on Loch Earn.


ben-vorlich.gpx Open full screen  NB: Walkhighlands is not responsible for the accuracy of gpx files in users posts

We left Glasgow a little late and as a result the laybys were already pretty full around the start point. After managing to locate a remaining space without an iffy looking ditch along it, we set off on the track past Ardvorlich House. Loch Earn at the start: 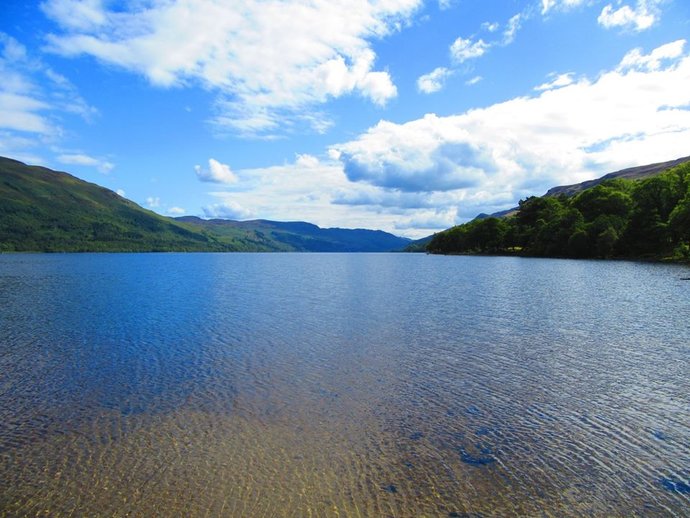 After passing the house the track begins to climb steadily with good views back over Loch Earn. 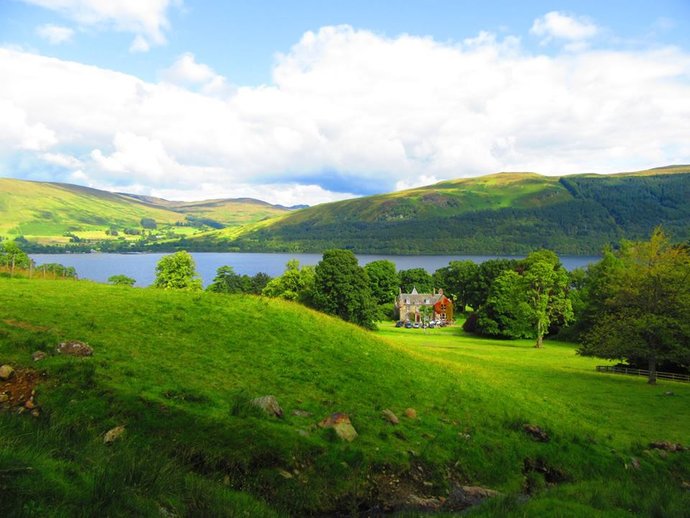 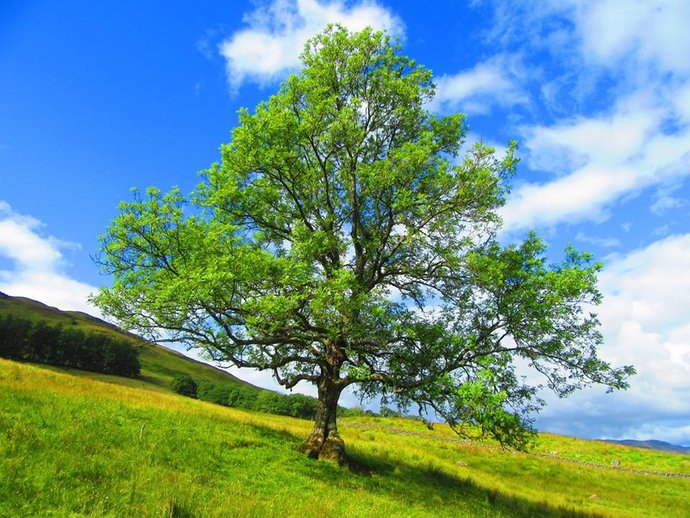 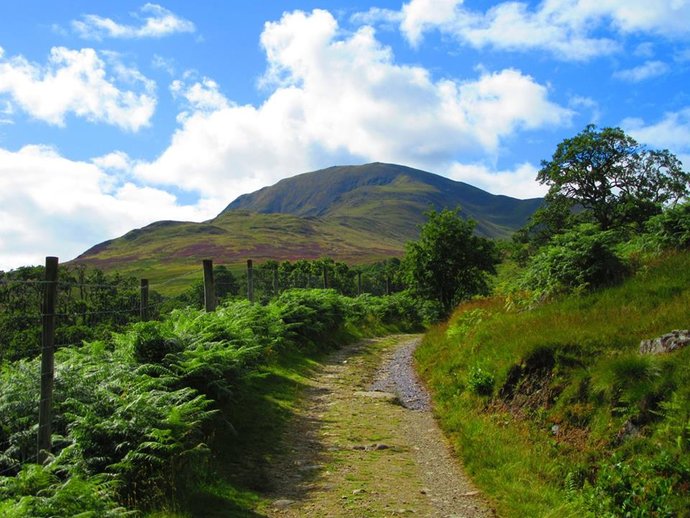 The track ends at a small reservoir, with a good path continuing onto open hillside beyond. Heather in bloom: 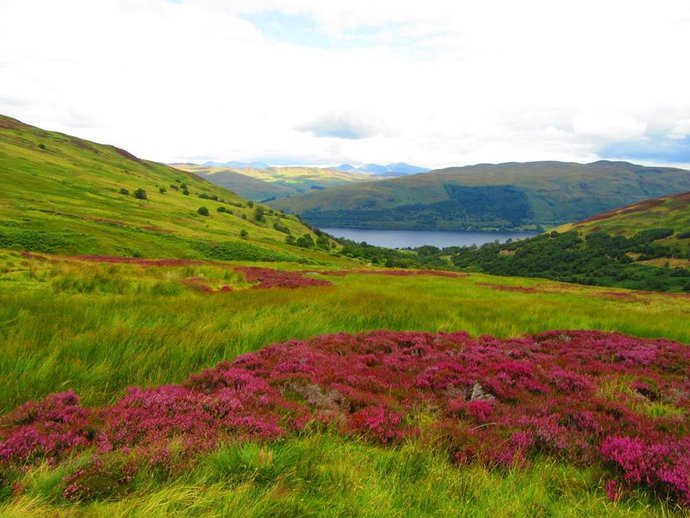 Path improvement works are ongoing on the next section (or possibly hydro works, I'm not sure), and for now, this stretch of "path" is a real mess while bulldozers drive up and down it. 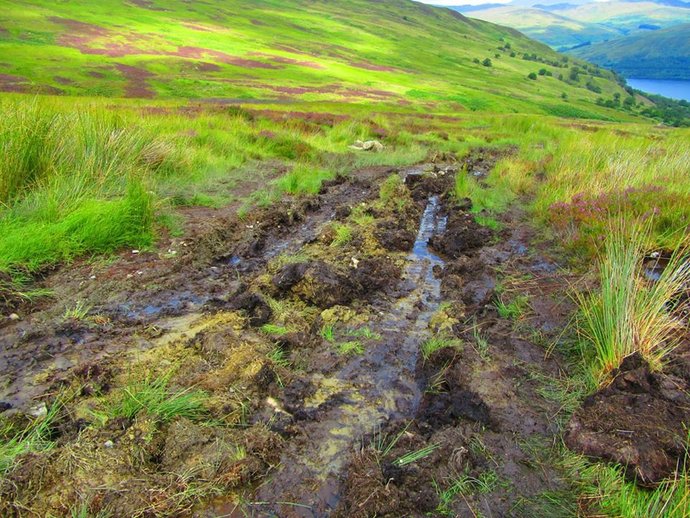 Beyond the construction works you can see the results on the part that's already been improved: immaculate! 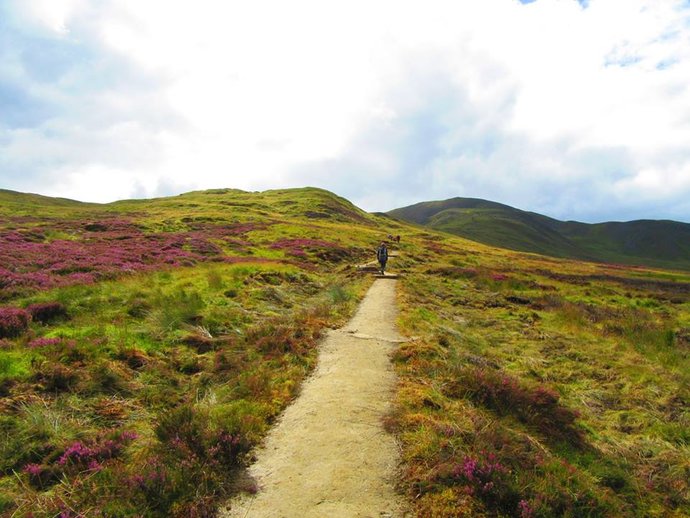 The path climbs slowly onto the north ridge, still with a good path though not as perfect as earlier: 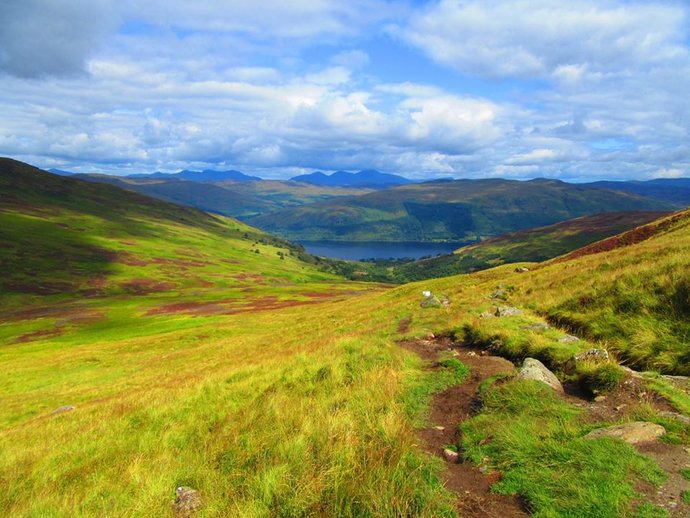 Cresting a small rise, there's a great view of the final, steeper ascent to the summit: 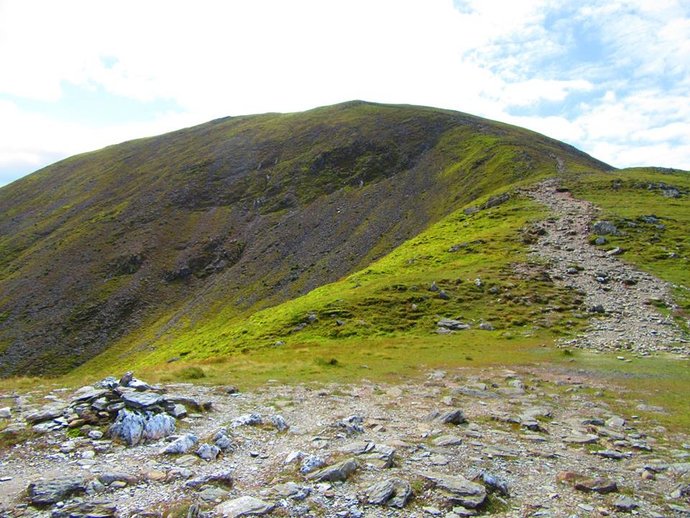 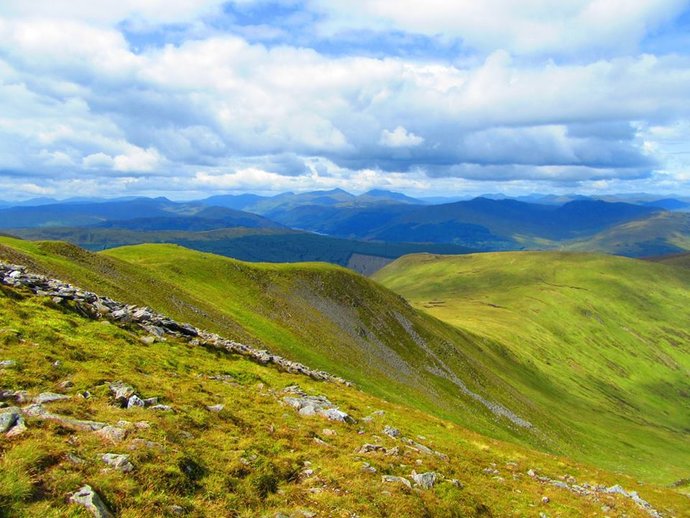 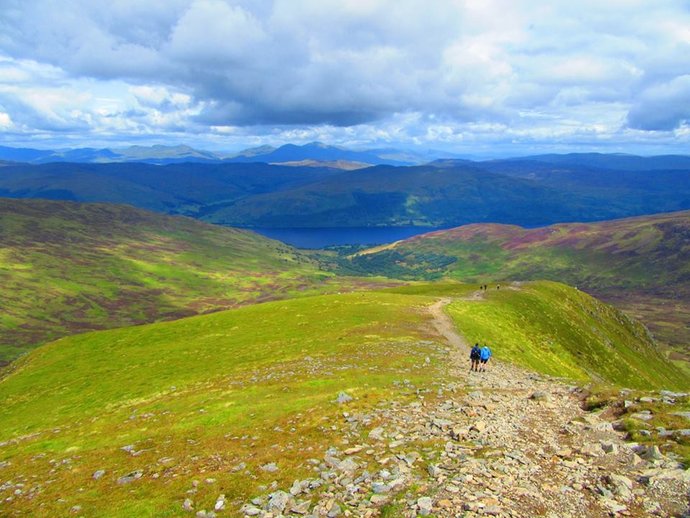 The trig point at the summit is reached very suddenly, with a further (lower) cairn just to the east. 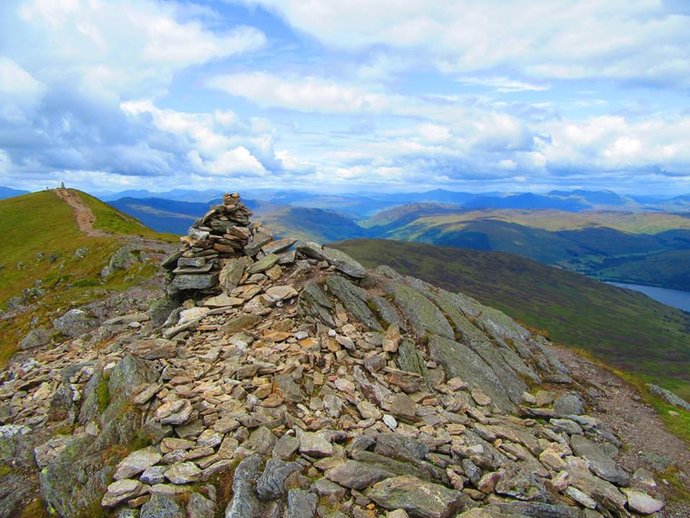 For now the hills were holding on to some decent spells of sunshine. Looking north: 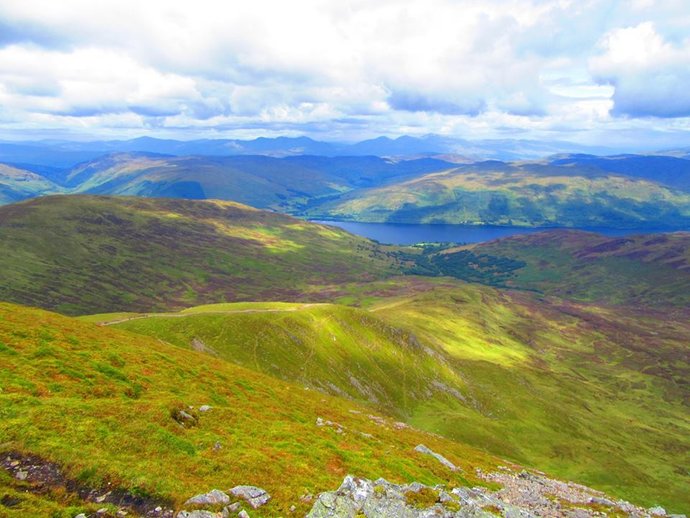 The huge Gleann an Dubh Choirean to the south-east: 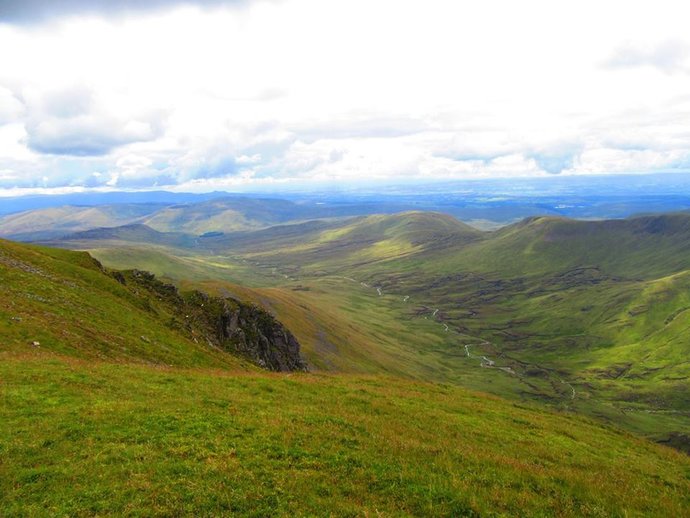 Lunch was cut a little short by a few midges, but ahead, Stuc a' Chroin looked enticing: 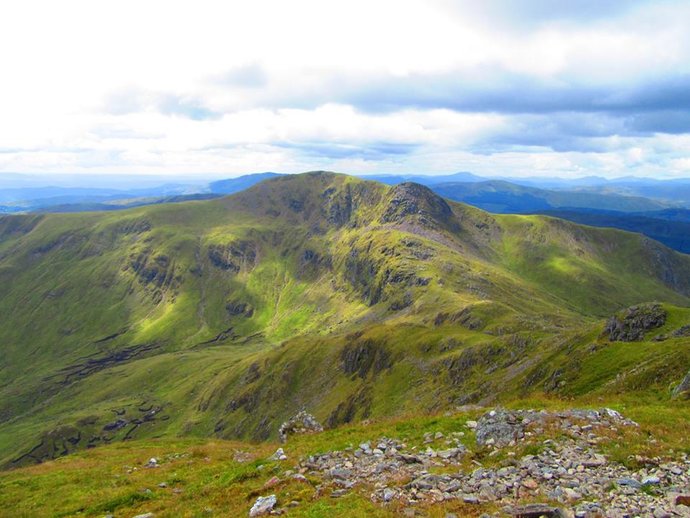 The path is a bit fainter but descends to the bealach at about 820 metres without any problems: 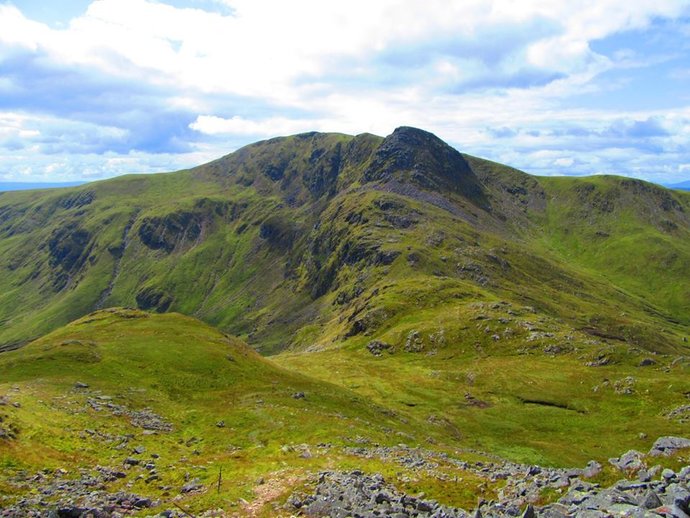 View back to Ben Vorlich: 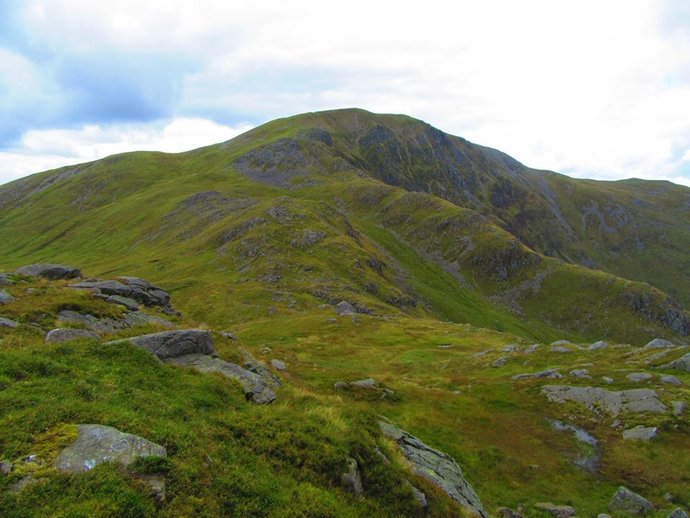 Now for the interesting bit. The path reaches the bottom of a a boulderfield / large scree. It continues to the left across even larger boulder, gradually fading to nothing. If you get this far, you've come a bit too far

- the correct (main) route ascends diagonally from left to right along the top of the boulderfield: 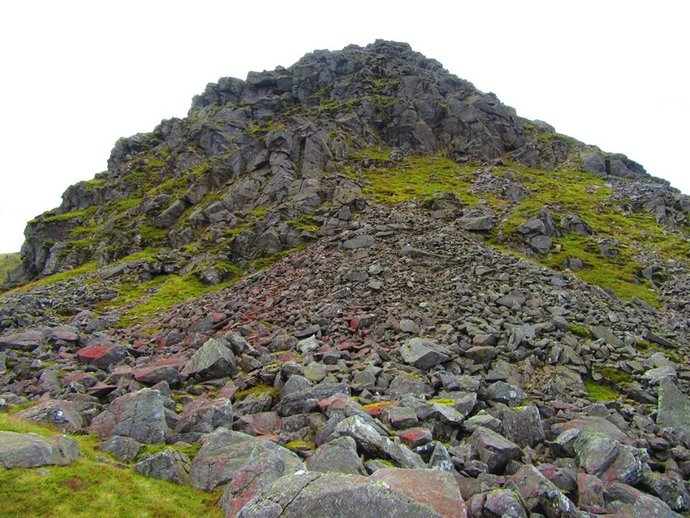 The path isn't visible from below but is fairly clear once on it. After the boulder field it braids into several branches, which (I think) all involve some fairly easy hands-on climbing to reach the "nose" of Stuc a' Chroin. Slightly tricker than expected, but nothing too difficult. View from the top of the nose: 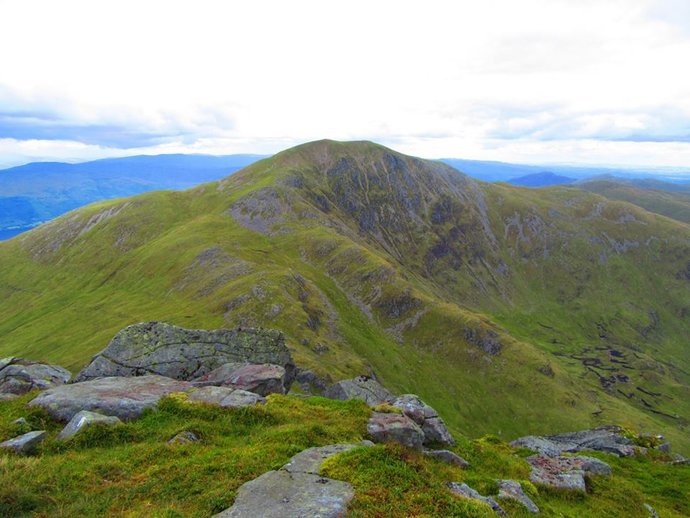 Ahead, you can see it's a straightforward stroll along the ridge to the second Munro of the day: 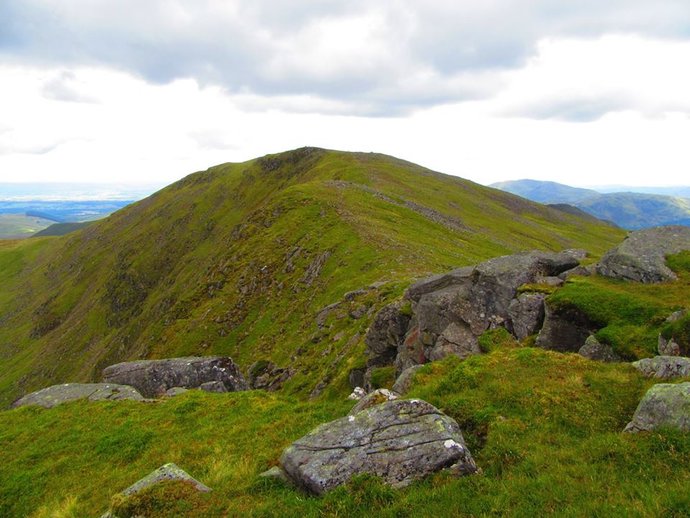 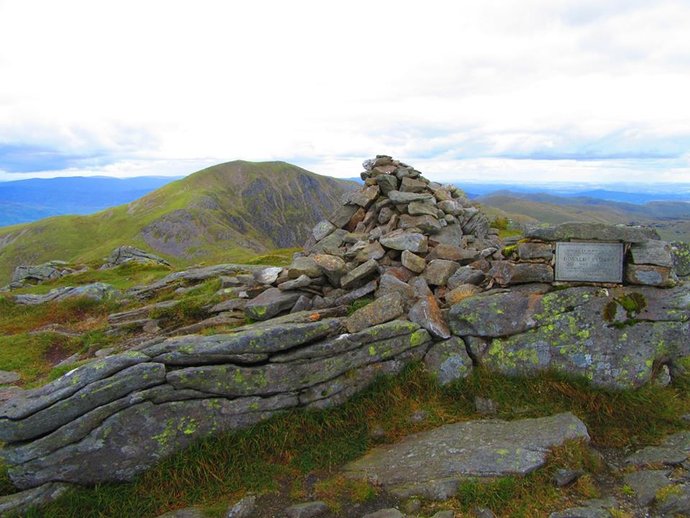 Rain was threatening but it didn't amount to much more than a few spots in the wind. Looking south-west to Beinn Each and the fair-sized Lochan a' Chroin under darkened skies: 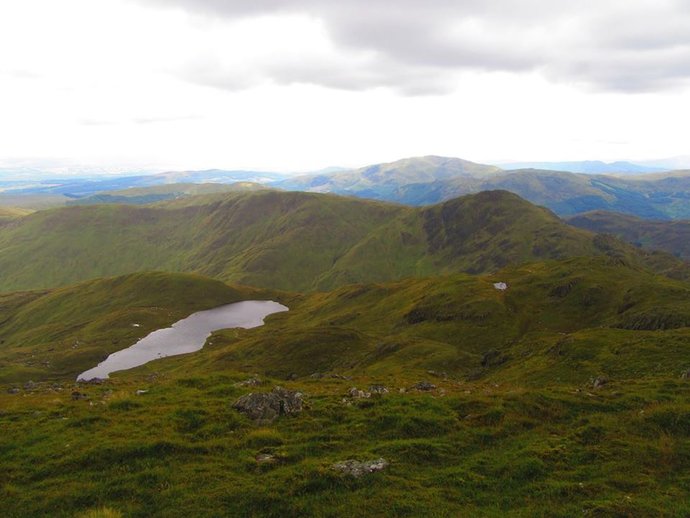 On the way back our route matched the Walkhighlands one, keeping to the left of the main ridges. There's a very slippery zig-zag descent off the north-west brow of Stuc a'Chroin which was especially entertaining with damp ground: Beyond this descend the path traverses north-east and nearly converges with the outward route in between the two Munros. They don't quite meet up, and the traverse becomes a slightly dull and very boggy slog for the next couple of miles - possibly better to re-ascend Ben Vorlich if the ground is very wet. 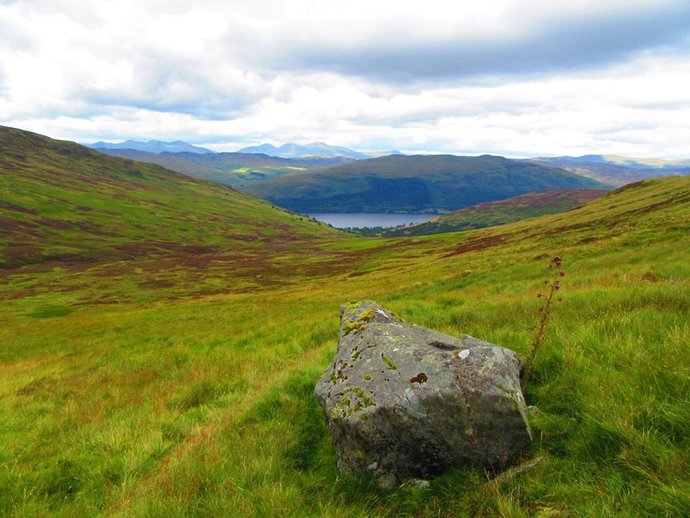 Nevertheless we somehow made it back to the outward track with dry feet, leaving an easy descent to finish the day.

An enjoyable, fairly straightforward day and pair of Munros despite the boggy return. And I've just noticed included our number 50

We're not planning to do them all though...