Great views from the Merrick

Great views from the Merrick


After a couple of great days in Knapdale, Kilmartin and Arrochar, I was on my way home and decided to go via Galloway as it was such a beautiful day. I'd thought of walking to Shalloch on Minnoch from Stinchar Bridge and then seeing how I was for time.

It was 25 years since I'd been there, and had been given this watercolour by a man who was sitting in his car, painting. His story was that he was now so arthritic that he couldn't walk the hills he loved so much any more, so he came and painted them instead. When he realised that I - a Southern English girl - had chosen to spend my bitterly cold (1992) 21st birthday overnighting and hiking in the hills, and my lovely (Ayrshire) boyfriend had made it so, he said it cheered him up to hear it. So he gave me his painting as a birthday present. I'm not sure which of us was the more moved! It's one of my most treasured possessions. 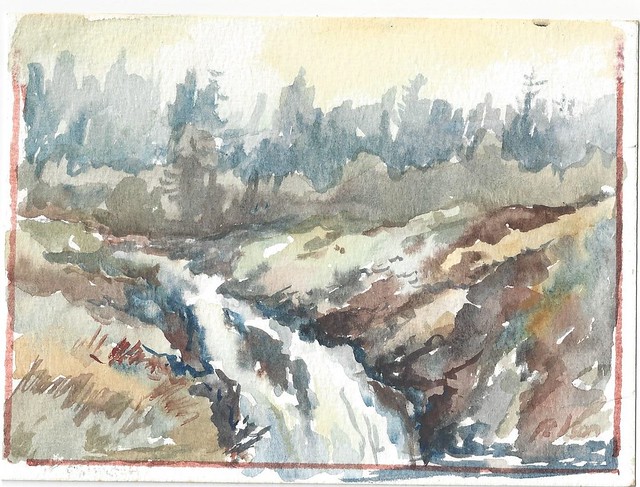 A bit more prosaically though, on this occasion, I was full of coffee and Stinchar bridge was full of people. All right for blokes, but a bit awkward for me. I scooted down to Glen Trool ('s loos) and decided to walk up the Merrick for old times' sake instead. It's 25 years or so since I last did that too.

As I booted up, a lady swung in next to me in the carpark, The Archers tum-te-tumming away in her car. "I don't listen to it," she explained, "but when I catch the beginning I have to listen to the whole thing to find out how it ends." She released a dog from the confines of the boot (and R4) and attached its lead to her waist. We ended up walking up together. My legs were a bit leaden from the previous day's Munros (Beinns Narnain and Ime), and when I saw how her dog was effectively pulling her up the hill, I was pretty envious. Must get one of those

We got to talking about wind-farms, and a guy behind us put on a spurt to catch us up so he could join in. They both basically bemoaned the fact (is it a fact? probably...) that Galloway and Dumfries isn't as protected from a proliferation of wind-farms 'n' things as the Highlands. I didn't say much. I see plenty of hydro infrastructure in the Highlands and bl***y vehicle tracks on moors for grouse-shooting. I did wonder, though, if there simply are more worldwide voices/wallets speaking up on behalf of the Highlands, rather than it just being a problem of local apathy, which was the line they were taking. They thought that might be a valid point.

Changing the subject, I asked what they felt about the Galloway Hoard and the NMS' bid to house it, and research, clean, protect, display it etc. "Don't see why Edinburgh should have it," was the answer. Okaaaay - I'll drop that topic then!

Ailsa Craig with the Mull of Kintyre in the background, ...and some wind-farm on the left. 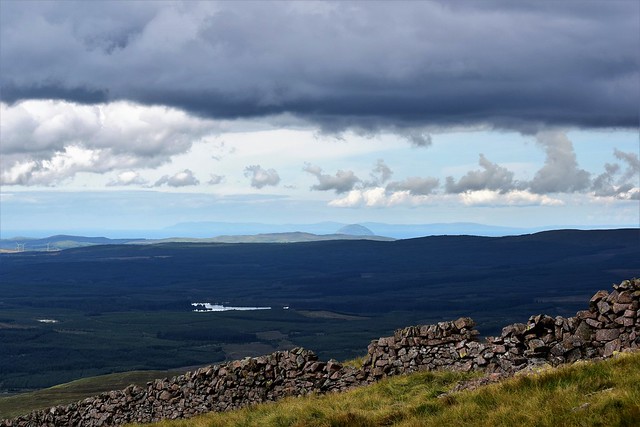 Northern Ireland in the distance.

The views across the Firth of Clyde and Irish Sea were great - a little hazy, but still. It was a joy to see Ailsa Craig again - funny how , like smells, there are occasional views which set off a flood of buried memories! The plug was clearly one of those.

At the summit, were scrounging ponies (so intent on trying to eat the camera or my pocket contents, I couldn't take a nice portrait shot of them)... 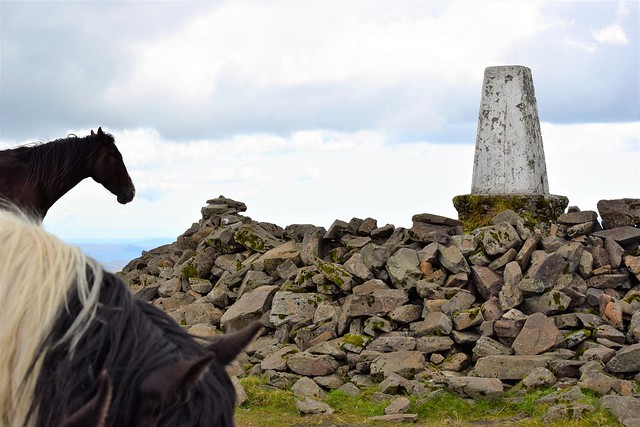 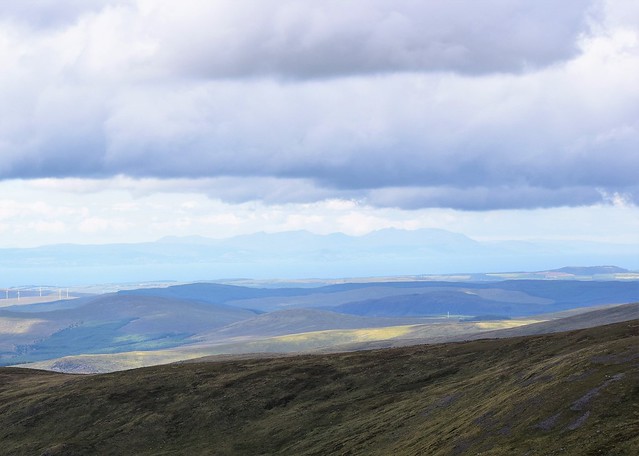 of Loch Doon over Hoodens Hill... 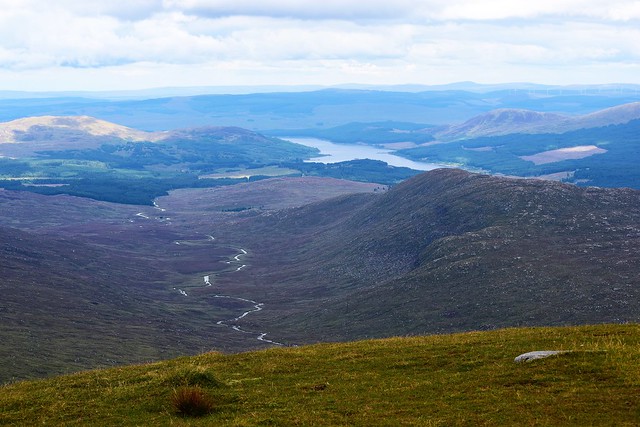 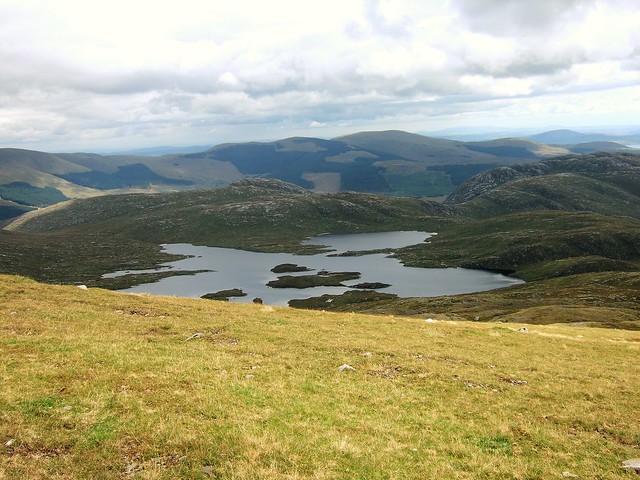 and a pretty smattering of Loch Arron, Crockett's "Murder Hole" and the rest of Loch Neldricken, and Loch Valley. 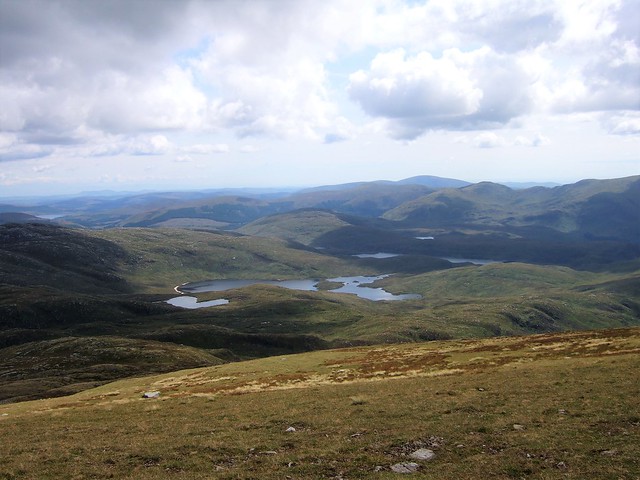 I confess though, on the way down - not helped by this being and out-and-back route, I was craving some craggy drama, wildlife, weather, something.... So mm, I think I'll revisit on another back-from-the-Highlands journey, when the snow's on the ground and wintery light bathes the hills and glens

Re: Great views from the Merrick

Really nice report bringing back memories of climbing Merrick on a stunning winters a few years back . The Lake District looked incredibly clear that day over the top of an inversion. It certainly is a great hill for views.