Blind flight to An Socach

Blind flight to An Socach


An Socach would be the last Munro of my 2017 trip to Scotland. The starting point was conveniently located on the road from Braemar back to Edinburgh, and the walk itself not very long or particularly difficult - if it weren't for the weather.

Like the day before, Monday started out with a sky covered in clouds, approximately at the same altitude as the day before. At least it did not rain, even though the forecast predicted some rain here and there.

The first part of the walk was on a good track up the glen along the Baddoch Burn. After fording the Allt Coire Fhearneasg, I left the track to the right and followed a small path up the flank of Socach Mòr. When crossing a boggy patch, I almost trod on a little bird, possibly a grouse chick. It did not fly or run away, which puzzled me. I looked closer, and it seemed to be stuck in the mud. With a soft twig, I wrenched it free, and it ran off immediately with a thankful (human thinking - probably it was just scared and wanted to alarm his/her mother...) cheep. 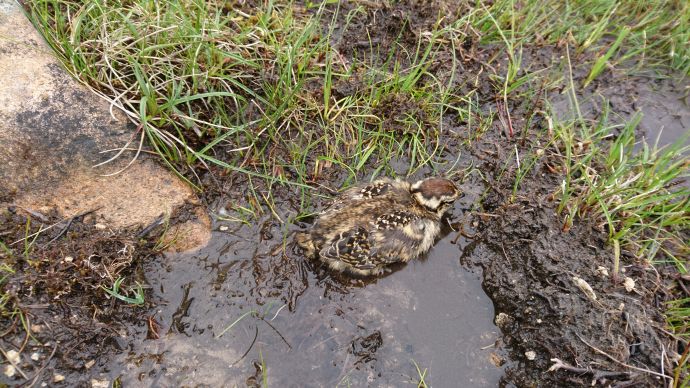 As I climbed steadily higher, now just straight up without bothering to find any path, the ground became rockier. Close to what I thought must be the eastern summit of an Socach, a path appeared. As I did not know where it came from or where it went, I ignored it for navigational reasons and continued to go just as uphill as possible. The strategy worked, as I soon arrived at the eastern summit, its elevation confirmed by the GPS reading. Having learned my lesson of the day before, I took out my compass and went WSW, keeping the GPS out as well for the distance. I did not see much further than maybe 20 or 30 meters, and it was absolutely quiet, no sound to be heard but my steps and a bit of wind.

I tried to look out for the little depression at a little less than half-way between the summits, where the Allt Boruiche starts. My B&B host told me there was a path up from the Glen to this point, which I intended to use on the way back down. However, I did not see any spot likely to be the depression, it was just too foggy. 45 minutes after the eastern summit, I reached the true summit cairn and shelter. After a quick bite to eat in the chilly fog, I went back to find the depression. Going back the exact same way was not very appealing, too much distance in the fog. I'd rather go down along Allt Boruiche, all the more if there was a path.
With the help of the GPS and compass again, I finally found what I thought to be the bed of the stream after some searching - but looking at the GPS data now, it wasn't. I went down too early, the path would have been a bit further to the East (see map in the end of the report).
Anyway, the bed was almost completely dry, and I more or less followed it down, joining other beds, filled with more and more water. It took much longer than expected to get out of the fog again, but once I was out, navigation was easier. At some point, the stream bed practically turned into a little path, which eventually joined the place where the track down the glen began. Following the track back to the car was an easy stroll, and I enjoyed my last one and a half hour of Highland walking for this year. Walking back to the car, goodbye to the Highlands for 2017. See you again next year.

20170529.gpx Open full screen  NB: Walkhighlands is not responsible for the accuracy of gpx files in users posts