For the third time in just the last few weeks, my grandson Matthew and I turned up at the Succoth car park, this time, determined to eventually conquer Beinn Ime. On the first occasion we were intending to do The Cobbler and then Ime, but the visibility was so poor that day, that not only were there no views from the summit of The Cobbler, Beinn Ime was not visible from either the Cobbler or when we had descended down into the bealach. I had done Ime many years ago and knew there were terrific views to be had, so knowing we would not be seeing them, we decided to wait for a better day.
Next attempt was meant to be Beinn Narnain then Ime. The weather was fine, but the frontal assault of Narnain, up the route that veers off at the beginning of the main path and via the spearhead, took longer than anticipated, and as I had commitments in Glasgow early that evening, time constraints meant that Ime was abandoned once more.
So here we were again. For the second time we headed off up the zig-zag path. At last we broke into the bealach and began the long walk to the foot of Ime. It seemed that virtually everybody branched off at the first path to The Cobbler and Matthew and I felt like intrepid explorers striking out for Beinn Ime on our own. Eventually Ime came into view and Matthew said that in his mind it reminded him of "Jabba the Hutt"! (Google a picture if you don't know what he looks like). So Beinn Ime became Jabba the Hutt! 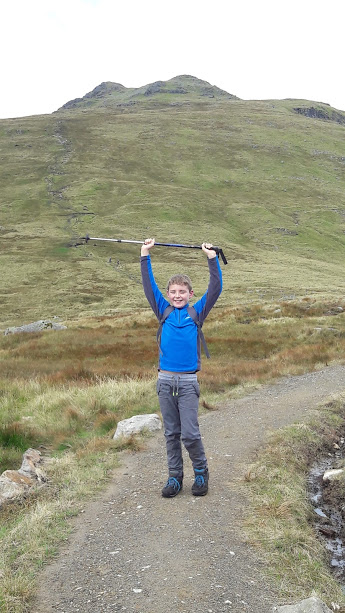 Matthew and "Jabba the Hutt"

We could now see a few people ahead of us, so we passed through the gate and began the long drag up the side of "Jabba". With all the recent rain we have been having, the route varied from OK to wet to wide bog. But we plodded on.
About half way up, Matthew (who is nine) began to struggle a bit and there was quite a bit of " bent over, forehead resting on the handle of his walking pole" going on. We have done quite a lot of walking together this summer ( 3 previous Munros and 2 Corbetts and Conic) but this was the most tired I'd seen him. It's difficult to know, when walking with someone so much younger, if you are pushing them too hard or not. It's easy for an adult to make a decision on whether to carry on or not, not so easy to make that decision for someone else. We continued on slowly till I insisted we stopped for some of our lunch, which Matthew had wanted to hold off until the summit (it's his reward). I figured some fuel and a rest would help him. That did seem to help, so we set off again and eventually we crested to see a short path with a final small pull to the summit. On the path we met a gent who had just left the summit. He congratulated Matthew, pulled out a Bounty Bar and offered it to him as a reward. Thank you sir, again.
A couple of minutes later, we were on the summit, seemingly on our own. Made it, at last.

We congratulated each other and began looking around, before taking the rest of our lunch. Matthew ate both bits of the Bounty Bar never thinking to offer his old grandad one!! 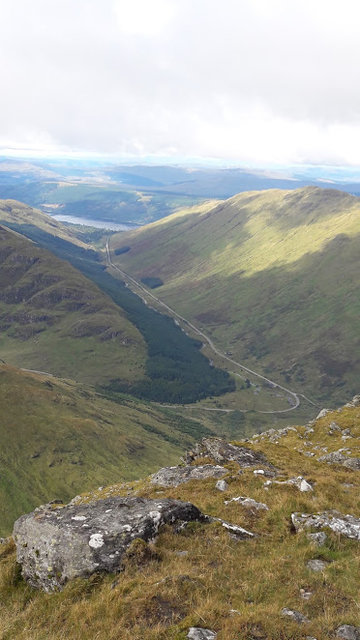 Butterbridge and The Rest and Be Thankful Soon a small dog appeared, to be followed shortly by an older gent, who we learned had come up the Butterbridge route. A conversation ensued where we learned that that the dog, called JD, was a rescued Romanian street dog. Also the gent was 80 years old, which put me, at 62, firmly in my place. He was impressed that Matthew called The Cobbler iconic, less so when Matthew couldn't give him a dictionary definition of the word! But we had a really nice talk together, 71 years between eldest and youngest!!! 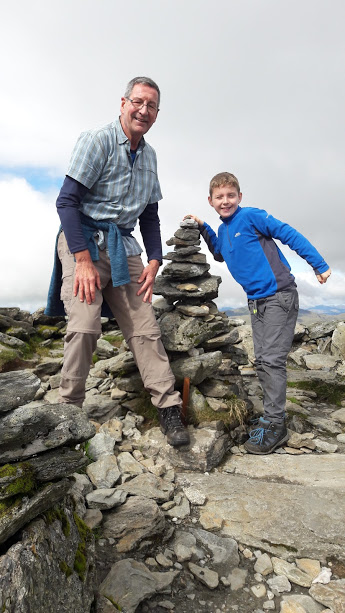 Me and Matthew, cairn Beinn Ime 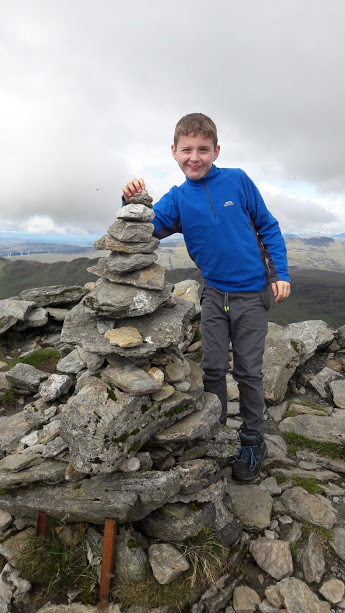 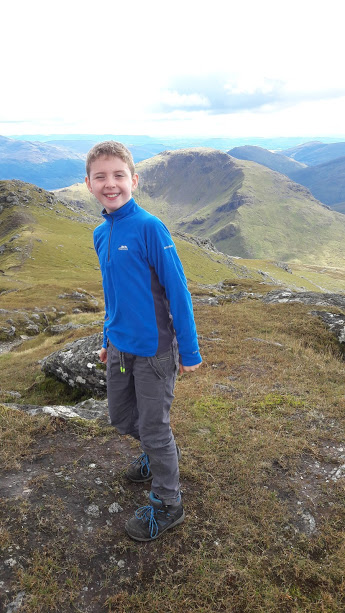 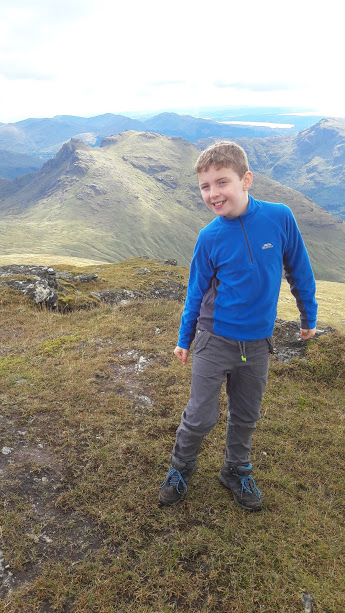 Matthew and The Cobbler

A few more people arrived on the summit and during a conversation with a lady and gent, the man mentioned something about the Walkhighlands website. I answered I had recently registered on the site. It transpired that he recognised me and Matthew from pictures on my only other report on Beinn Narnain and he had only just read it. What are the chances? Matthew was well chuffed. Our fleeting minute of internet celebrity!!
After a good time on the summit, we headed back down "Jabba", through the gate where the path became busier again at the three way junction with most people descending from The Cobbler. Past the Narnain Boulders and for the third and last time (at least for this year) down the, by now, boring zig-zags. Getting near the car park, Matthew mentioned that his legs were "vibrating", so I think he had just about reached his limit for the day. Anyway, mission accomplished. Not sure if Matthew and I will be able to do many more walks this year now that the schools are back and he also has a couple of clubs to go to at the weekend, but he is already bending my ear for next years outings!

Well done! I've still to get back there after my failed attempt where I settled for just Beinn Narnain at around the same time.

Saw nothing from ime when I did it so I reckon I'll go back up - maybe on a nice clear winter day.

Congrats go you and Mathew.

Stop and fuel up is the way ahead if your tired, or like me - have a bar of chocolate or mint cake in my pocket to have a little now and again.

- I found Beinn Ime a pretty unforgiving slog on my Narnain/Ime/bear day, so I'm glad you were rewarded with grand clear views at the top. I lunched on that stone in your Rest and Be Thankful photo - but had to imagine the view, so it's lovely to see what I was missing. And as for the octogenarian - wow!

Matthew (and me) says thanks for the comments.

Good things come to those who wait!