Track_2017-09-09 173533.gpx Open full screen  NB: Walkhighlands is not responsible for the accuracy of gpx files in users posts

It was time for the annual family get together at a cottage, this year's location was Gairloch, handily chosen so I could get back into Torridon should the weather give me a chance. The cottage had a cracking hill top position which meant I could see Skye out to the west and Torridon to the south, when they and us weren't covered in the rain showers that were a feature of the week's weather.

I'd pretty much given up hope of getting a decent day for hill walking when the forecast on Friday showed Saturday to be ok. Not much rain forecast, not much chance of a cloud free summit either but the wind was light and the cloud was predicted to lift in the afternoon. Liathach had long been ruled out without perfect weather so Beinn Eighe it was.

Manda was to join me for this one but Mountain Mutt was left with my parents as he has developed a limp that no one can find a cause of, so has been on restricted duties for months to try and let it heal. We had to be back to the cottage and ready for dinner at 7pm so an earlyish start was required. We got to the first car park for Beinn Eighe (the one next to the random cluster of trees) and found it had been resurfaced recently and is now an excellent place to leave the car. It was just after 9am and we were the only car, I started to wonder if everyone else knew something I didn't as it was a lovely day, so much so I felt the need to put on sun cream. Shortly afterwards a convoy of cars and vans arrived and it turned out SARDA were having a training day and soon 20 dogs and people were milling about. We had a chat with them and were given the jokey send off of "Well at least if you need us there are 20 dogs here to find you!"

Obviously someone who knows about my navigational lapses!

We set off up the excellent path heading north to tackle Spidean Coire nan Clach first. It was really easy to follow as it meanders up the slope following the path of the stream. I was starting to feel confident about having a good weather day. Most of the cloud was high, there were breaks to blue sky and the sun felt like it was going to burn the rest away. Stream falling down a big rock slab on the way up 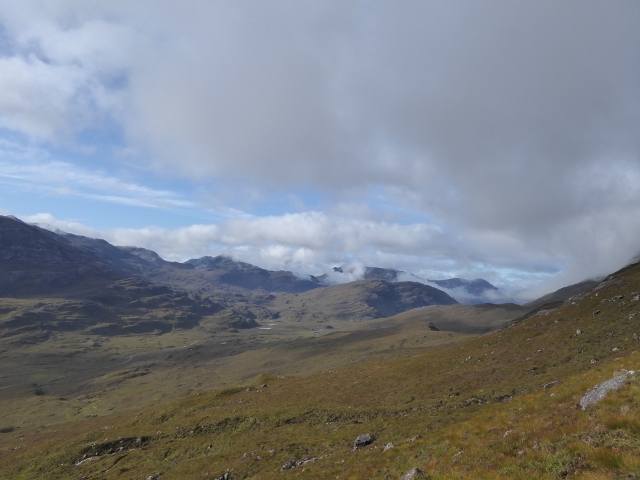 There was little let up in the slope until just before the path turned left into Coire an Laoigh when it flattened out temporarily and our legs got a break. You really do feel every metre of ascent when you start from just about sea level. 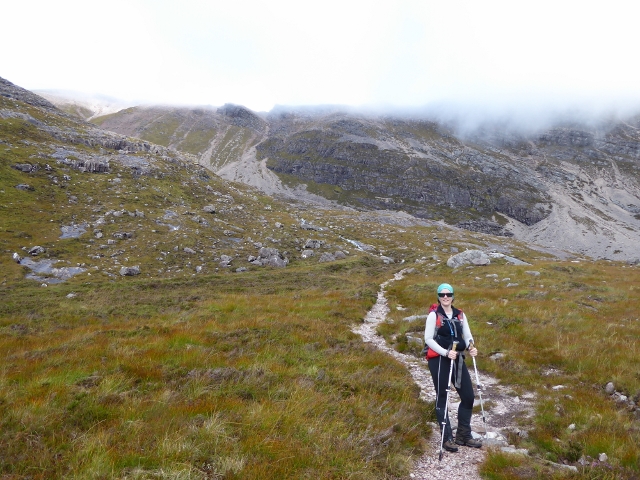 Manda just before we turned into the Coire

The final climb out of the coire to the cairn on the ridge between Stuc Coire an Laoigh and Spidean Coire nan Clach was incredibly steep and mostly on scree which made the going slow. The main ridge of Beinn Eighe was still covered in cloud but every now and then a section would be revealed. We turned north again and climbed the last short and steep section to join the main ridge. 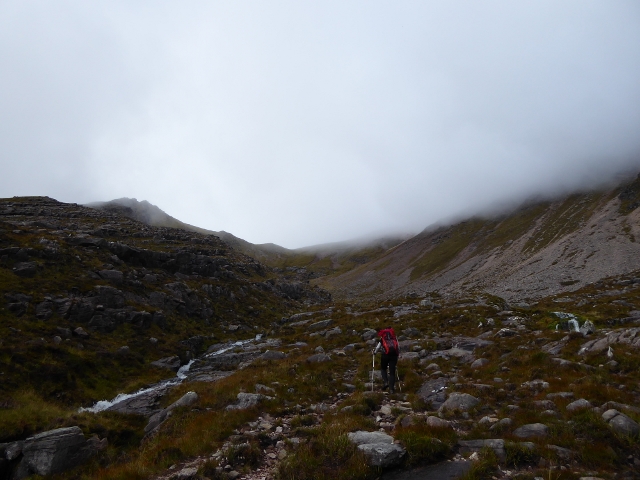 There was an OS trig point here but I knew the true summit was a little bit away to the right. This was where the fun started.

I love ridge walking, especially if it is narrow and rocky with a bit of clambering about and route picking involved and that was exactly what this section was like. I was as happy as the proverbial pig!

We were in the cloud and it wasn't going anywhere and out of the shelter of the hills the wind had increased so we had to put our jackets on. Just as we were doing so we heard voices coming towards us which turned out to be two Spanish guys wearing just shorts. I thought I was meant to be the one acclimatised to this weather

The final climb to the summit is easy enough to spot through all the grey rock and we found the tiny cairn with no problems. It was nice sitting here. Couldn't see a thing but couldn't hear anything either, very peaceful. The cloud made the summit feel very exposed too since we had no idea what was beyond a few metres in front of us. 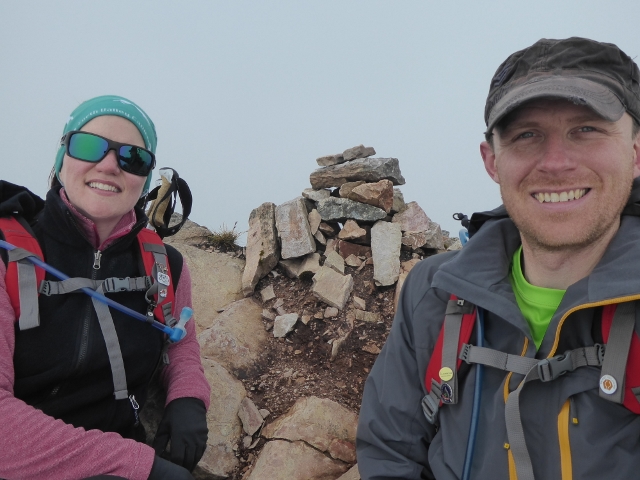 It had taken us 2hrs and 10 mins to get here. It was a bit early for lunch so we set off along the ridge for Ruadh-stac Mor. 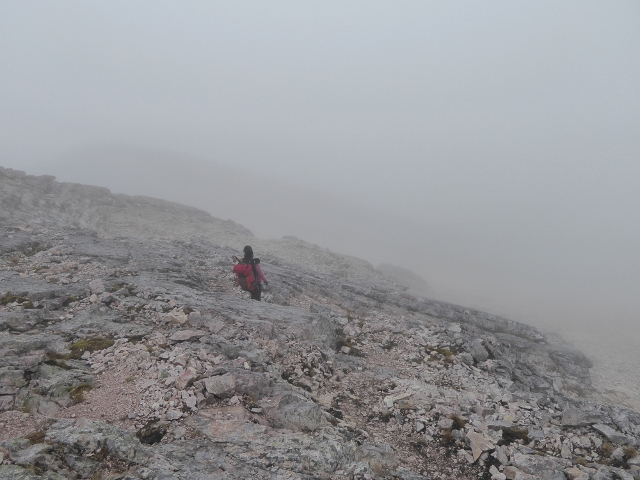 Manda on the way down from the summit of Spidean 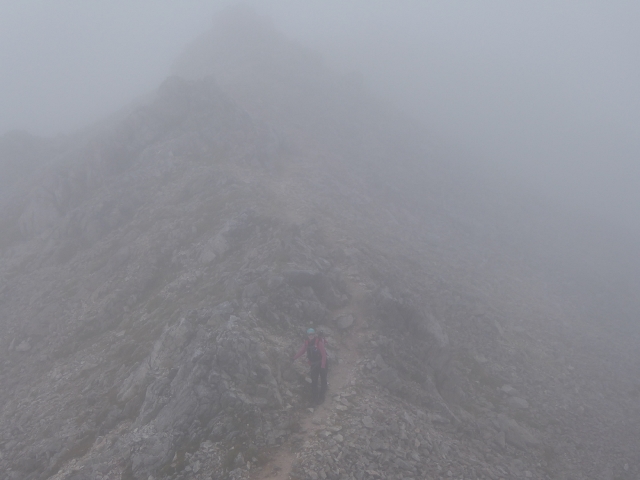 On the main path along the ridge

The ridge was quite varied ranging from the narrow rocky stuff to a wide flat grassy section. The path all the way along was easy to follow and there was no great exposure. The cloud kept on swirling about and I had to be quick to get a few clear pics of the route ahead. 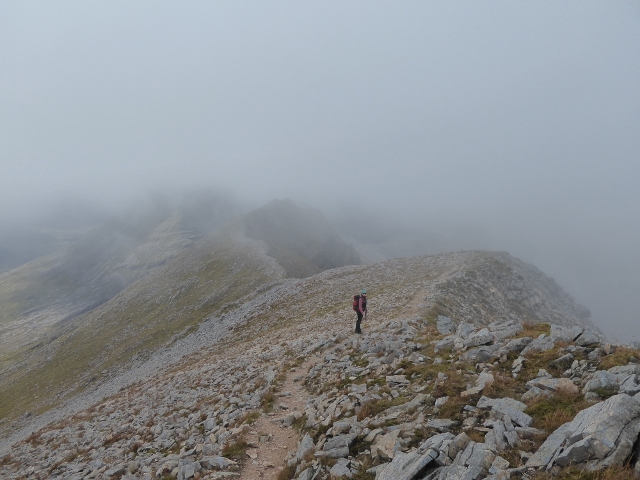 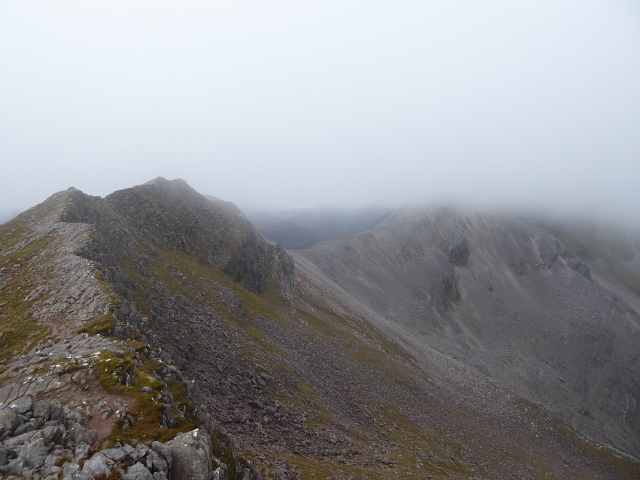 As we walked around the head of Coire Ruadh-staca the rock formations were really interesting. On the approach to Coinneach Mhor, Manda spotted what looked like a bypass path that contoured around the northern slopes and dropped us onto the bealach between it and Ruadh-stac Mor. We decided to give it go to cut out an unnecessary ascent of Coinneach Mhor and it was a great little shortcut. The funny bit was when we looked back at it from the side of Ruadh-stac Mor we couldn't spot it at all. Once we were on the bealach I turned round and got the best view of the day as the cloud had lifted high enough for us to see most of the way we had just hiked. The way to RSM summit

It was half 1 now and we were hungry so stopped for lunch before tackling Ruadh-stac Mor. Soon after we stopped and I took the picture of Coire Mhic Fhearchair we looked out to the west and realised this was going to be as good as it got and made a beeline for the summit. 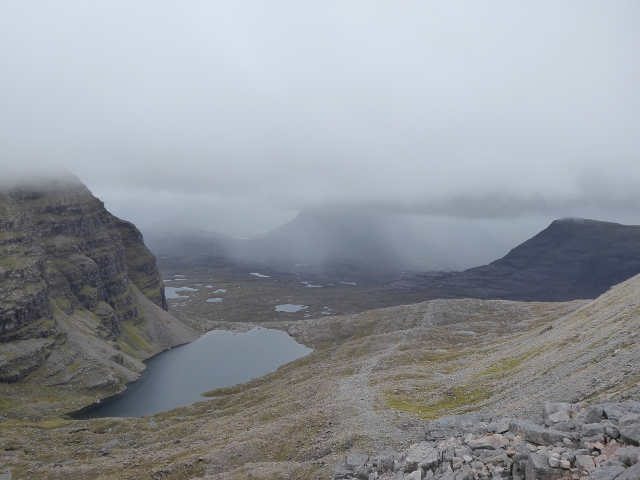 Storm coming in from the west

Again this was such a strange ascent. From the picture and view we had it looked to be all rocky and certainly started out that way but again we ended up on a wide grassy plain before the final rocky bit to the summit. It was also further away than I'd expected. 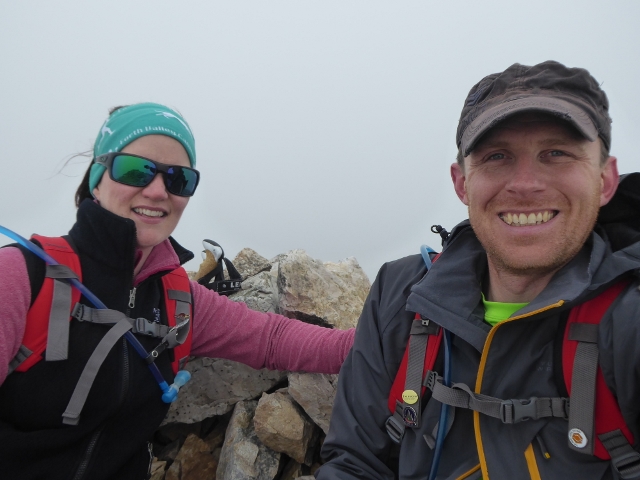 Now it was a case of retrace our path back to the bealach to descend via the red scree path down into Coire Mhic Fhearchair. The cloud had really dropped now and we had no view at all of the coire. When I told Manda the steep and loose scree was our way down I got a few choice words about my routes and not telling her about stuff until we were at it Manda starting the descent down the scree 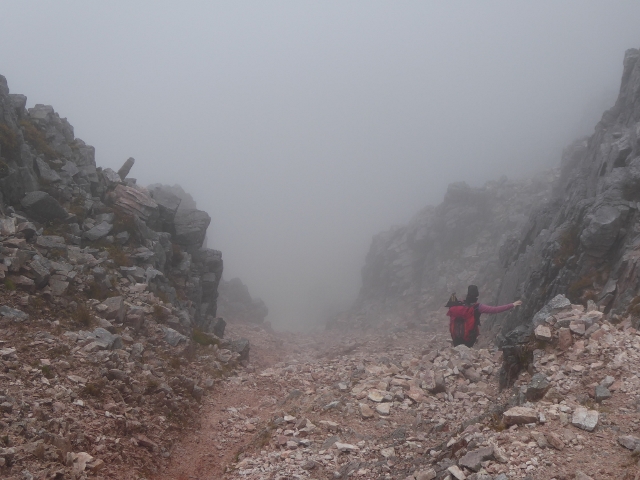 To be fair, she is really good at analysing things and finding a slightly less dodgy way to do things. I would've just ploughed down the scree had I been leading, but the erosion has actually made decent stairs in the rock down the right hand side (you can see Manda starting to negotiate this in the pics) which made this slightly easier. I think I was far enough away to not hear the lovely comments my wife was making about me 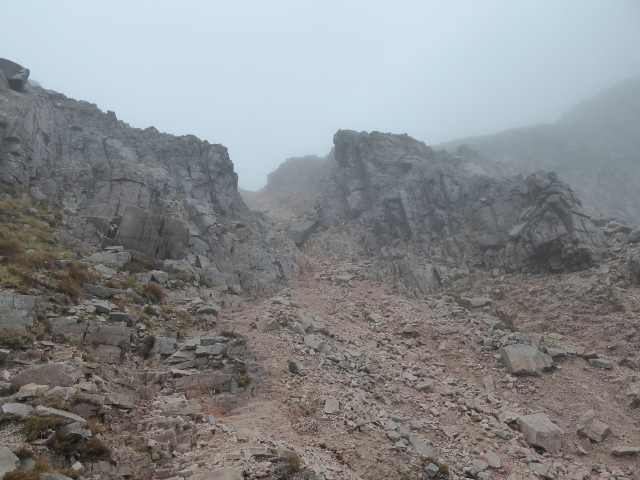 Yes, there is a way down that

The cloud was really low now and I couldn't see the cliffs of the buttresses at all and just see the lochan. Once down the scree we still had to negotiate a large rock field and the large sandstone steps down to the lochan. A bit of route finding was involved here and we did go round about trying to find the safest way down. Sandstone is surprisingly slippy when it is wet!

The water system in the coire is fantastic. Each step has its own lochan which in turn feeds the lochan below via a series of stunning waterfalls. It's fantastic just to watch. I know, it's just falling water but there was something almost engineering like to it in my mind. 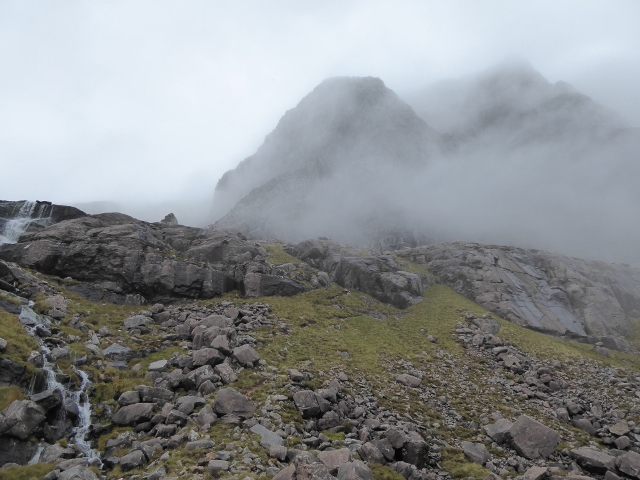 Only view of the cliffs 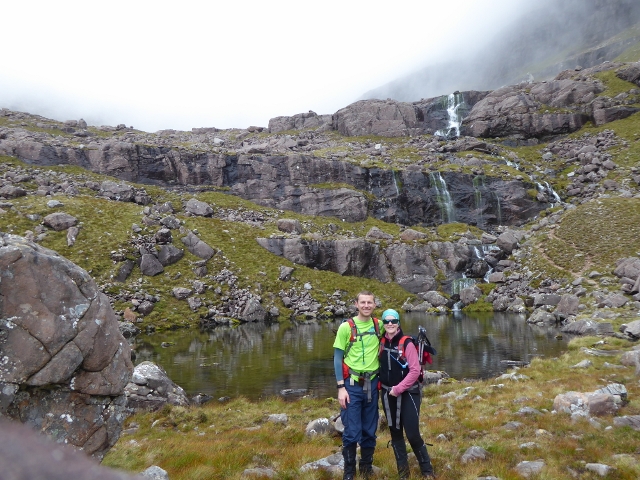 The final pic before the rain set in

Just after this final small lochan where the picture above was taken we saw the path which led down and round the main loch. What we weren't expecting to find was some large chunks of metal that were scattered about. Turns out this was the wreckage of a Lancaster bomber that crashed into the coire in 1951. The metal was still in very good condition, hardly any rust.

As we walked round the north shore of the loch the rain and wind set in big time and it was time for full waterproofs. We could see nothing and to be honest were hunkered over to keep the rain out of our hoods. The path crossed the stream at the head of the loch at the top of the waterfalls then it was a long, long, long walk back to the road. It was such a shame we couldn't see more of these waterfalls as they sounded immense. 2 hours later we were back at the road at the other car park and half an hour along the road took us back to the car. The rain didn't let up and we saw so little of the country we were walking through. At least the re-waterproofing of the waterproofs had proved to be a success. Phew!

This was my first torridon hill and isn't it just fantastic?!

When you go back try going the other way round. The view when you walk into Coire Mhic Fhearchair is something else

My fav Munro, always good, no matter what conditions

Worth returning to for the views, especially in winter conditions. Fingers crossed you have more luck with weather next time!

And hopefully the Mutt recovers soon