Saturday the 9th was forecast to be nice enough for a hill wander and I was eager to tick off another Munro. Kevin, who was still in a recovery mood from his case of shingles, wasn't sure how much he would be able to do, but desperate to give it a try. Having climbed all easier mountains near Inverness, I suggested driving down to visit Ben Challum (or Challuim - I've seen both spellings). Might be a long way to get to the starting point, bit at least the Munro itself is only a half-day's walk and the usual route is in non-stalking area.

We had originally concocted a plan of "Glen a'Chlachain circuit" including Challum and two neighbouring Corbetts, but that was now out of question, no way Kevin could cope with 1500m of ascent today, so we were doing the Munro only - the Tyndrum Corbetts have to wait for another day

So what we did was the basic up-and-down from Kirkton, with a slight variation in descent:

Track_BEINN CHALLUIM 09-09-17.gpx Open full screen  NB: Walkhighlands is not responsible for the accuracy of gpx files in users posts
I was worried about parking space, but the layby on A82 was almost empty, only one car, which was surprising - I always thought that the southern Munros are busy every weekend with Glasgow/Edinburgh baggers

Weather was promising, sunny and relatively warm. We crossed the bridge over River Fillan and joined the West Highland Way:

There's a lovely panorama to Ben More, Stob Binnein and Cruach Ardrain from the WHW path near Kirkton Farm:

Just past the farm buildings we turned off the WHW and took a grassy track heading uphill past a small cemetery: Hidden in the trees in front of us, is a railway crossing:

Beinn Chuirn (with the quarry) and Ben Lui from the railway crossing:

Past the crossing, the track ends quickly, but a small cairn marks the start of a path, very wet and indistinct to begin with. We had to fight through some high bracken to eventually pick a good line of ascent along the fence: The ground was wet and somehow squelchy ("mushy tatties") but I didn't mind it and marched up with confidence, sadly poor Kevin struggled to keep up with me... He was still not fully recovered and I didn't expect him to run up to the summit, so I had slow down and adjust my pace to his. Thankfully, he was slow but persistent. We kept close to the fence, with improving views south to More/Binnein group:

There are two stiles to negotiate, of course Kevin couldn't resist photographing me in a silly pose; a cat on the fence

The climb felt a bit of a slog to be honest and I was impatient to get high enough to be at least able to see the summit above us!

My wish was granted eventually, but with the perspective of more bog in the foreground

Mesmerized by that view... beware, the Southern Uplands, the meowing one is coming!

The final push to the lower top is about 250m of steep-ish, grassy slope, wet in places but easy otherwise: We took our time on the final ascent, allowing ample stops for photos ant to catch a breath, I really didn't want to push Kevin too far, but he was doing all right. Of course he hasn't regained all his strength yet and reaching the top of a Munro would be a success today, so I didn't even mention any Corbetts that could be added

I was surprised to how lovely the views are from Ben Challum, ever from lower slopes. Especially due west: Slowly but surely, we plodded on until reaching the lower top. There is a large cairn by the path, just below the first summit...

...and the panoramas are superb in all directions! To the north of us - countless hills, big and small:

The true summit of Challum lies 600m further along the ridge but there's little drop and re-ascent to be done:

View south-west from the lower top:

As we strolled casually along the arete, the sun came out and warmed our old bones

It felt fantastic to be high up in the sunshine, surrounded by great views!
Back to the lower top:

The summit is topped by a large cairn, where wee Lucy celebrated her 57th Munro (she's catching up Lucy posing with Creag Mhor, another mountain still on her (and our) list! Kevin the warrior - he was hit hard but he's fighting back! Enjoying a photo session and the autumn sunshine: I'll leave you now with a few panoramas from the summit. We spent over half an hour on the top of Bein Challum. Another walker came, we exchanged a few pleasantries, but he soon carried on down the eastern slopes (probably doing the Glen a'Chlachain circuit). We just lingered by the cairn, unwilling to leave. There was a touch of cold in the air, the first sign of coming autumn. Hopefully we'll get good Indian summer.
Now to the panos...
South-West to the lower top and More/Binnein group:

Due north to the hills of Bridge of Orchy and Loch Lyon:

Fantastic Glen Lochay to the east, Lawers group on the horizon and the familiar shape of Meal Glas in the foreground:

Would that be Cruachan group? Another cluster of superb-looking mountains!

The Ben wearing a hat of cloud:

Ben More and Stob Binnein, still waiting to be climbed... probably will have to wait till next year... They look painfully steep!

We spotted a pair of ravens bullying a large bird of pray - possibly an eagle, but before I managed to grab the camera, the ravens chased the bigger bird away... I stared east into the vastness of Glen Lochay, but the potential eagle never returned 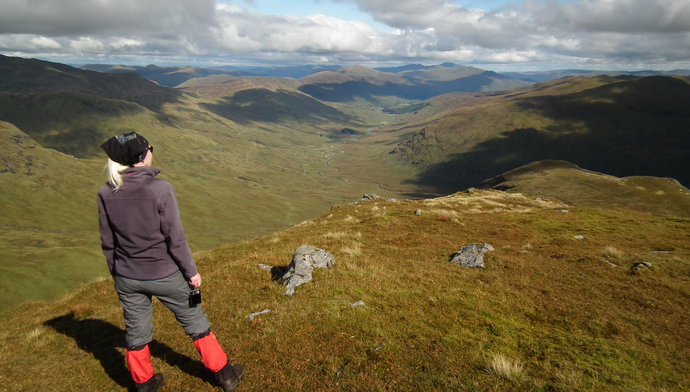 It was hard to leave such surrounding, but we still had the 2.5hrs drive back home, so we returned to the lower top and started the patient plodding down back to the car park. We passed a few other walkers heading for the summit. About half way down, we saw a familiar face, waving to us. It was Dave (stirlingdavo), whom we had met before during the spring WH meet in Kinlochleven, so we stopped for a wee chat

Weather was actually improving in the afternoon, so there was no need to hurry and with lovely views around who would care about time anyway?

We took a slightly different line of descent on the lower slopes, a little bit to the left (north) of the main path, circling around the fenced-off wooded area and avoiding the two stiles, but the ground was just as wet everywhere

The last moments of freedom:

Back down by the crossing, we spied an old footbridge hidden in the trees. The WH description says its use is "not permitted" but we broke the rules and had a look around Back on the track by the farm, we still couldn't get enough of the superb views...

It took us 6 hrs 20 min to climb Challum - of course we were slow that day, but I didn't mind, I was happy that Kevin was fighting back

...
My husband's recovery proved quick and last Sunday he almost run up Streap with me following with my tongue sticking out, begging him to slow down

Nice hill, this one, especially because of the views one gets from the top. Which you certainly took full advantage of! Those panos look brilliant on a big screen

Another good one, some wonderful panoramas there.

I will probably never do this one, as it requires me to finish all the other Munros first

. A long time ago I told myself that "Malcolm's Mountain", Beinn Challum, would be a fitting completion summit for one so named. Given my recent rate is about two a year, I need to live to about 120!

We did this one on a gorgeous May day when Moira found it too hot on the way up so instead of doing both Ben More and Stob Binnein the next day I moderated it to just SB. That was two hears ago and we've still not managed back to do BM. We should have just gone for it when we had the chance!

I wondered if there was any hill called "Evvie's Mountain" (or Eva's, Iva's, Eve's - any version of my name)... There's Eva's Tower in in Red Rock canyon (Nevada) but that's a pinnacle for rock climbers. Other than that, the only one remotely similar is... Mount EVErest

That's a mountain to finish on (not literally)

Nice report with excellent pano's. Weather looked just right, not too hot and not too cold.

I really enjoyed Ben Challum, glad you did as well. Especially interesting wee bit between the summits and the views all round as special

Glad you got the weather for it