The Monadhliath Bog with a camp and a double ton.

The Monadhliath Bog with a camp and a double ton.


We finished our circuit of Creag Meagaidh in mid-afternoon and had a wee tea break in a short burst of sunshine - encountering the only midge of the week sheltered behind a tree! Would we be able to do the Lochaber Traverse or not? Sadly the forecast was for rain, cloud and wind, so we decided to ditch that idea for now and come back to it on a better week.
So now we are on Plan E I think.

monadhliath 3.gpx Open full screen  NB: Walkhighlands is not responsible for the accuracy of gpx files in users posts
Why did we choose to do the Monadhliath Munros? I have done my research and I knew it was boggy, but the attraction of a sweet line of blue balloons north of Glen Spean/Spey where before there had been only red was too much to miss. Also it was on the way to the in-laws' house in Deeside. And we've walked in Scotland all our lives, what could be so bad???? even after a prolonged wet spell?
We drove to Glen Banchor and set off about 5pm planning to walk for about two hours and find a camping place in Gleann Ballach before it got dark. Glen Banchor was lovely and it was a pleasant evening when we set off, not cold, not raining though overcast. The track a short way up the glen and up the East bank of the Allt Fionndrigh is good going and takes you nicely to the footbridge across the allt. From there a path sets off up across the bealach to lead into Glen Ballach. this is where the bog starts in earnest.
There are ATV tracks across the bealach which are easily followed but extremely wet and we were glad to reach the burn in Gleann Ballach and find a small flattish, green area right by the water's edge. We managed to get a brew on and make our tea before the rain started but we ate it inside the tent and went to bed shortly after that.
In the morning it was clear when we got up. I spotted what I thought was a helicopter a distance away but when it flapped its wings it became apparent it was an eagle!
The weather looked like it was quite promising with a shaft of sunlight on Carn Dearg as we ate our breakfast but sadly this was not to last. once we reached the bealach north of Carn Dearg it was pretty windy and we were careful not to go too near the edge when approaching the summit cairn, which is perched right on the edge of the cliff! 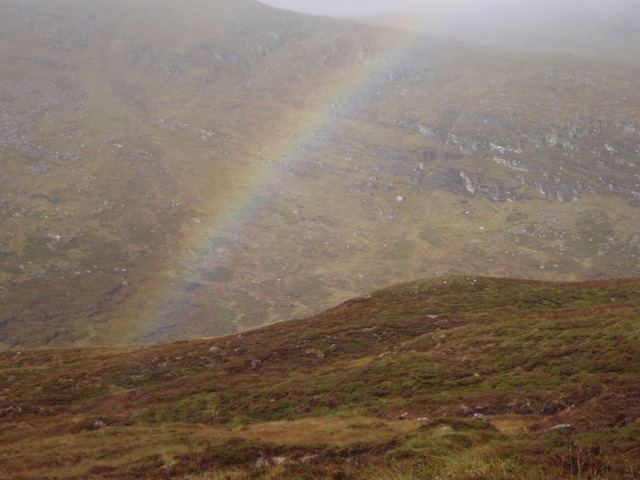 The bog we crossed yesterday evening not sure what this pose is about, but that is the top of Carn Dearg From Carn Dearg you retrace your steps a bit to the bealach then go over 5 - or 6 - or is it 7 featureless lumps over 8km to reach Carn Sgulain. For nearly all of this way there is a line of fence posts which is very helpful and fortunately once we turned eastwards from Carn Ban the lashing wind and rain was mostly from behind. To be honest at the beginning it was fairly stony but as we got further east it got more and more boggy. It was too cold to stop really so we kept going on handfuls of trail mix and jelly babies. As we went on we got occasional glimpses of A'Chailleach somewhere on the top some featureless bumps. I'm sure on a glorious day this would be superb. but not superb enough for me to want to come back. One of the magnificent bogs Hurrah we made it at last! celebrating being alive, not realising it was my 200

The top of Carn Sgulain is the first cairn but we went to both to be sure as neither of us has any intention of climbing this hill again. Although technically not difficult the last 8km had been psychologically very hard.
And to add to the irony, this was my 200th Munro, although I didn't realise it until I updated my balloons!!
To get to a'Chailleach you have to retrace your steps a bit and then cross some more bog and by this time we were just splashing through stuff. You have to be a bit careful on the hags not to step on the smooth flat bits where you could lose a body, but by some miracle we managed to avoid any of these. Poles are handy for this too as you can poke the bog to find out if it is just a bit of peat or moss suspended in water or has a bit of substance to it. It's the lime green moss you really have to watch out for!! you could hide a body in ponds like this There was a brief respite from the wind and rain and the sun almost came out when we stopped by the burn Allt Cuil na Caillich for a belated lunch. By this time I was at the stage of only really tolerating Jelly Babies.
It's a funny thing, I used to be quite astounded at people who said they could not eat when out on the hills. Now I find myself in a similar position; sometimes I cannot manage anything except sweeties. Any hints and tips on this gratefully received.
Actually the rest did us good and it was not long before we were at the summit of A'Chailleach and all that remained was to get back to the car. can I go home now please? We took the path south westish towards the bealach with Geal Charn and picked up the ATV track which more or less follows the burn down Coire Dubh. The track was very wet so it was easier to splash about in the grass round about it, and it does come and go a bit as well. However we reached the burn at the bottom of the hill, forded it carefully - although my feet were sodden already I didn't want any sudden rush of cold water to them! and picked up the equally boggy path on the other side. We were extremely grateful to reach the track at 691013 which took us the last mile back to the car. One more river to cross

After that we stopped at Joe's chippy in Kingussie (highly recommended, you can sit in as well!) before the drive over the Lecht to the in-laws and a soft, warm bed.

Well, congrats on the double ton! Pity it had to be under such "mixed" conditions! I really admire your determination and fortitude in persisting when it's somewhat dreich. It reminded me why I work hard to avoid this kind of weather - although I know that often it looks a lot worse in pics than it is as actually experienced on the day.

BTW : Your mention of plans to do the Lochaber Traverse caused me to look it up, because I'd never heard of it. It turns out I unknowingly did it, albeit as a round, starting and ending in Glen Nevis. Duuuhhh!

Thanks Alteknacker. It was pretty awful weather but we are all dry warm and rested now and it doesn't seem to be so bad in retrospect!
anyway we are ready for another foray into the equinoxial gales next week!

Congratulations on the big 200! As for hiding bodies in bogs, remind me not to walk with you any time soon!

Congratulations on the DBL ton,only three behind me now

Well done on your 200 - especially in the recent non-conducive-to-walking-in-hills weather.

Graeme D wrote:Congratulations on the big 200! As for hiding bodies in bogs, remind me not to walk with you any time soon!

Oh its OK we haven't needed to use that facility yet.....

gammy leg walker wrote:Congratulations on the DBL ton,only three behind me now

Thanks Gammy, you'd better get cracking!

Thank you. It's getting a bit wearing seeing nothing at all!

Thanks Robert. We'll never catch you up though!