The plan, as always, was a bit vague until I picked Steve up in Penrith and we decided on Sphinx ridge, one of the non-tourist routes up Great Gable involving some scrambling up Napes Crags. The weather was fairly good but we were expecting low cloud and strong winds, with possibly some rain coming in from the west, so Sphinx ridge seemed like a good plan, with the option to bypass the ridge and go up the (long and arduous) screes to the west of the ridge, if the weather turned or the scrambling turned out to be harder than the last time we did it, which always appears to be a 'standard' 30 years ago for us - not that we can remember the exact decade.


Gt Gable 23_9_17.gpx Open full screen  NB: Walkhighlands is not responsible for the accuracy of gpx files in users posts

We parked on the roadside near Seathwaite, noting the new campsite and car park (£3), as we walked past. We took the track through the farm buildings and over the footbridge to take the path up to Sty Head via Taylor Gill Force. This path involves a bit of minor scrambling and is less busy and more interesting than the usual route via Stockley Bridge.

We made good time to Sty Head and picked up the Climber's Traverse without too much trouble, although it is a lot less well trodden now that climbers tend to use the climbing gym rather than the high crags. The path passes Kern Knotts crag and then meanders over the screes, with little difficulty until a short scramble up the scree to the west of Napes Needle, that needs a bit of attention. Napes Needle - the birthplace of rock climbing. From the Dress Circle, the traditional place to sit and watch climbers on the needle (no-one was climbing anywhere on Napes Crags today - something unimaginable 30 years ago).

We reached the Dress Circle no problem and this is where the fun (not) began. The Climber's Traverse was always a well-polished scramble, with the odd airy step over a long drop that kept you focused. However, either the lack of travel over recent years, or the long wet summer, or both, coupled with the cloud-base that we had now reached, had left the rock slimy-green and very slick, making even a slightly sloping rock ledge a major hazard. Nearing Sphinx Rock (or Cat Rock, depending on how you look at it) there is a 'bad step' where you have to traverse out over a gully. With the slick rock, this step (which I have to say I don't even recall from previous visits) was a serious, nerve-wracking couple of moves. Looking along the traverse to Sphinx/Cat Rock. The 'bad step' is around the corner ahead.

Sphinx Ridge itself starts as a rock climb directly above Sphinx Rock, but we intended to avoid the difficulties via the scree-gully to the right (east). After the bad step, I was all for missing the ridge out altogether, but actually the greasy rock can be almost completely avoided to the right and the start at least didn't look so bad, so we decided to give it a go with the option to back down if necessary. There is one airy step quite early on, but the footing here is more broken and, with the condition of the rock, more secure, so we got above this without any problem and had a brief stop for lunch in a hollow out of the wind. The rest of the ridge was actually straightforward, but always interesting, requiring both hands and feet, but with any serious difficulties being turned on one side or the other. We arrived on the grassy arete joining Napes Crags and Westmorland Crag after what seemed like about half an hour. The grassy arete at the top of the ridge leading up to Westmorland Crag.

We aborted an attempt to get up the main gully in Westmorland Crag due to the slick rock and skirted around the crag to the west. The summit is a short walk to the north. 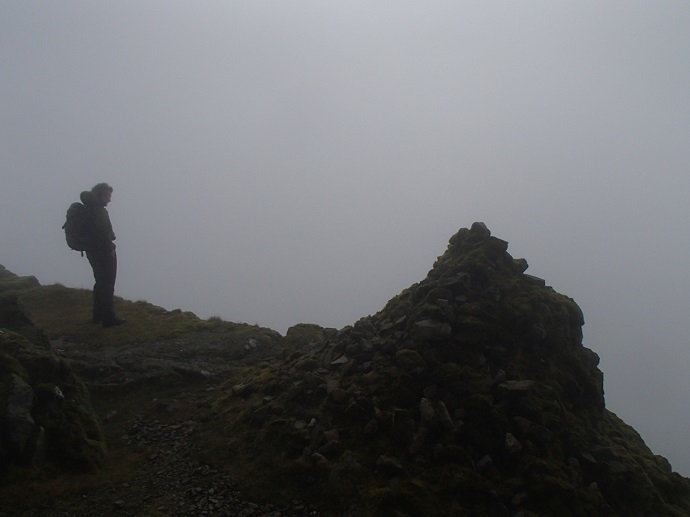 The F&RCC memorial at the summit of Great Gable.

Since we had now completed the original plan and it was only just after lunchtime, we needed a new plan, which was obviously 'the pub', but which one? The Wasdale Head Inn was the obvious choice for the historic surroundings, even though it was going to add a painful descent and even more painful climb back up to Styhead - but that was later.

We descended the line of cairns to the northwest (I'll admit we thought we were heading down the western slope) and came out of the cloud to realise we were at the pass to Kirk Fell - which in hindsight was probably the best option anyway, avoiding the much steeper more direct line. Wastdale, Wastwater and our destination the Wasdale Head Inn, revealed as we came out of the cloud at Beck Head.

Even so, it was a steep, long and bone-jarring descent into Wasdale, but with a very nice pint in the Wasdale Head to make up for it. We weren't as enthusiastic about the return journey up Wasdale as much as the way down for some reason. despite a much better view of Great Gable and Napes Crags as the cloud briefly lifted in the late afternoon.

The return up to Styhead and the drop back down via the somewhat faster Stockley Bridge route in the gathering gloom were definitely not the highlights of what was another great day out on the Western fells. The long trip back up to Sty Head.