Munros included on this walk: Sgòr an Lochain Uaine

27 people think this report is great. Register or Login free to be able to rate and comment on reports (as well as access 1:25000 mapping).

our_route.gpx Open full screen  NB: Walkhighlands is not responsible for the accuracy of gpx files in users posts
A week or two after tackling Ledge Route on Ben Nevis, my appetite for scrambling routes was understandably thriving. High on my list was the north-east ridge of Sgor an Lochain Uaine. Its remoteness - and therefore inaccessibility - only added to its romantic appeal. Both my previous visits had taken in the summit in transit on a longer traverse, so there would be refreshing novelty in this approach. Media coverage of the potential melting, for the first time in 11 years, of the near-by Sphinx snow patch – as close to a glacier as Scotland gets – sowed the idea of paying it a visit. A perfect weather forecast had arrived, but falling on a working Tuesday wasn’t ideal. However, work hours could be made up, and this opportunity was too good to resist - the snow might not last much longer! I’d made my mind up the prior afternoon, printing the maps I needed with – for once – clarity of intention for the day to follow. With the thermometer reading -1 and the skies crystal clear, I left the chilly shade of the Linn of Dee car park a little after 7am, pedalling along the familiar, easy-sloped track to Derry Lodge. Beyond the new bridge (barely wide enough to push a bike across) the path crosses a boggy area before it climbed out of the shade into the morning sunshine, with the Scots Pines beside the river lit up beautifully. 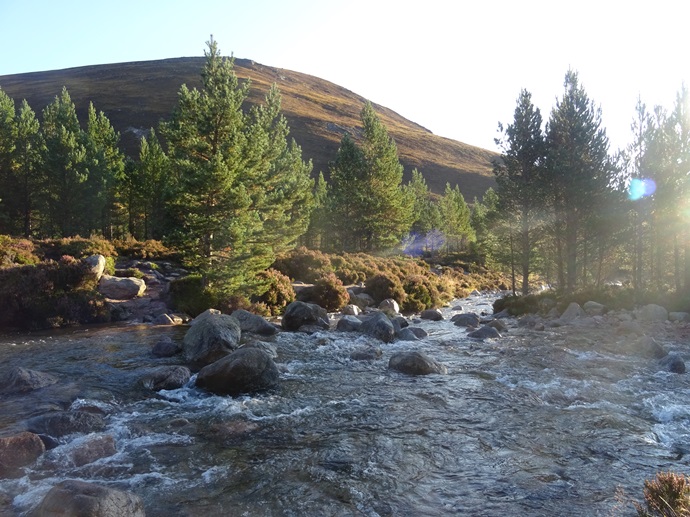 The path narrows as it heads into the young pines beside the river ford, and in hindsight I should have left the bike here. But intent on cycling into the Lairig Ghru, I dragged it through the strong current whilst precariously boulder-hopping across. To reach the opposite bank dry-shod was a minor miracle. The bike was hauled onto my shoulder for the steps the other side, with the reward being a picturesque array of colours looking up Glen Lui to Sron Riach. My hybrid bike was a tortuous accompaniment to the path as it continued across the hillside, with countless drainage channels cutting across the track, requiring energetic, back-tyre-pounding hops, if requiring a dismount altogether. Pedals scraping ankles and clattering off rocks left me cursing the advice I'd read that taking a bike into the Lairig was straightforward - far from it! However the stunning landscape more than made up for any frustration. I love this time of year as the lush summer greens transform into a fiery palette of yellows, oranges and reds. Blue sky, warm sunshine; just perfect. With the arrowheads of The Devil's Point and Cairn Toul looming into view, the path became even rockier as it dropped into the Lairig Ghru, and eventually I saw sense and ditched the bike. Corrour bothy emerged from the dawn shadows as I passed. Eventually the time came to branch off the main path, cutting across pathless heather to boulder-hop the River Dee. The route to Lochain Uaine, from where my grade 2 scramble would begin, proved to be a steep plod up Cairn Toul's grassy northern flank. 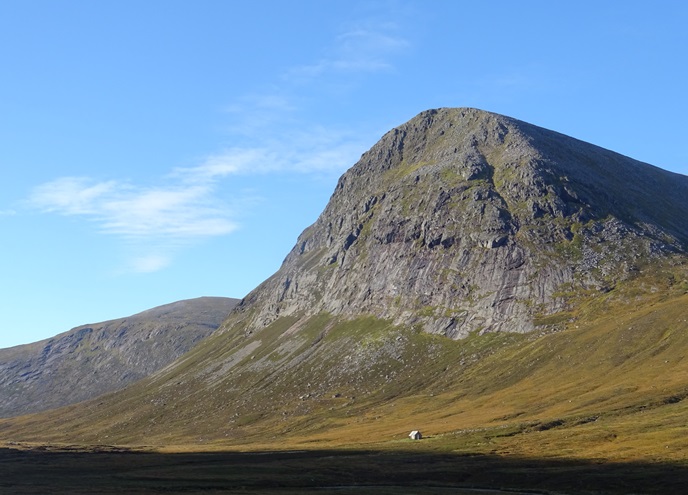 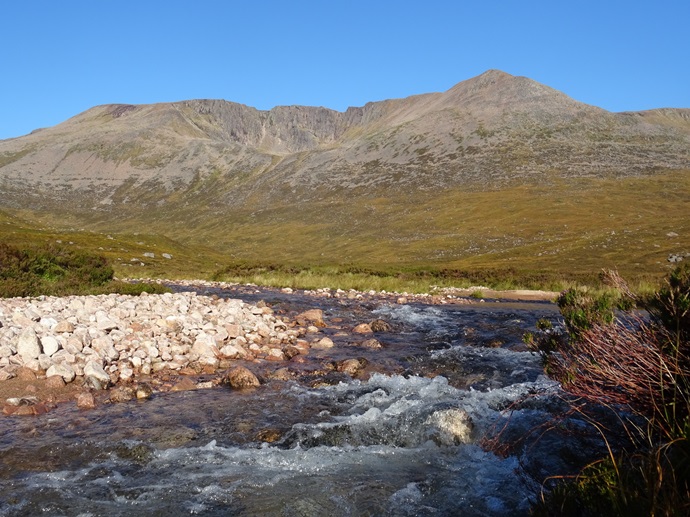 The view that suddenly opened up as I crested the ridge was breath-taking - my north-east ridge soaring from the calm waters of the lochan to the pointed summit. What a prospect it was. I stopped for some lunch besides the calm of the lochside, not a breath of wind, only sunshine and the chatter of the burn departing to meet the Dee. 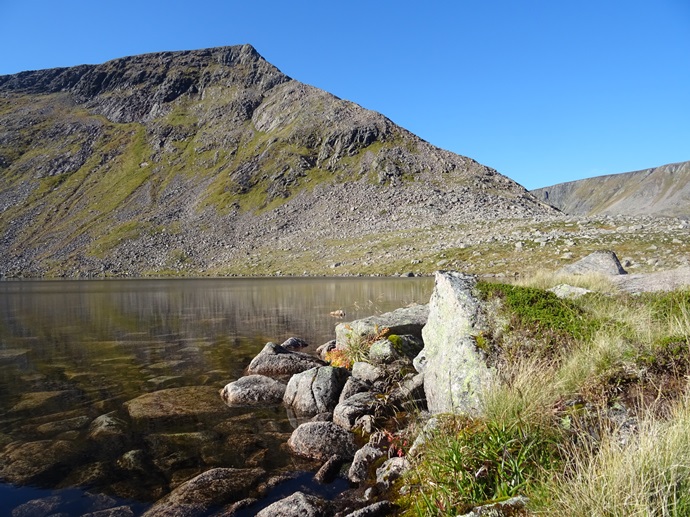 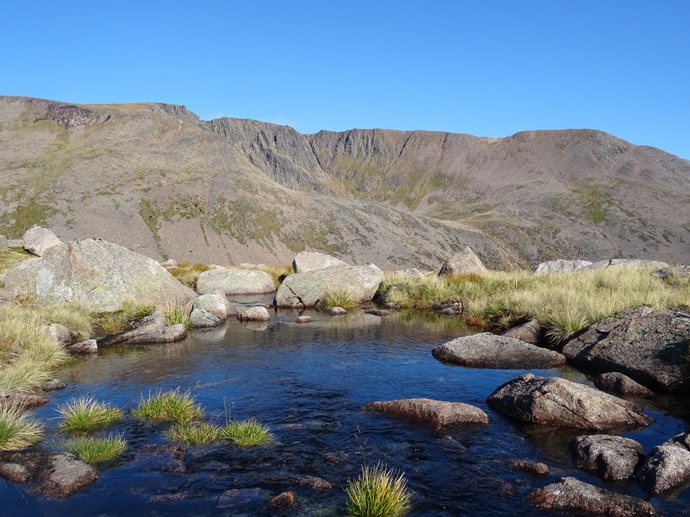 The lower half of the ridge was wide and boulder-strewn, traces of a path but using the large stable blocks as a staircase is the easiest way. I paused frequently to photograph the lochan below me, with the muscular Ben Macdui rising behind, as the Coastguard helicopter flew past. As the gradient increased the crest became narrower, converging on the summit like a church spire. I felt confident on the abrasive, dry granite. It felt like I could put my boots anywhere and they would stick. Regardless there were amble blocks and flakes of rock to haul myself up with, including a couple of sensational sections of narrow shark-fin rock to edge along. As the guidebooks had explained, there was easier ground either side of the true crest, but I was having too much fun, and followed the purest line the whole way. I broke into the sunshine before the final few feet on easier ground brought me abruptly to the modest summit cairn. A superb route savoured in ideal conditions. I picked out the Lomond hills amidst a horizon filled with Grampian summits, contemplating whether to continue the scrambling via Cairn Toul and its east ridge. However the novelty of seeking out “Scotland’s last glacier” won the contest. I walked swiftly around the corrie rim, eyeing up the best place to drop down into the great bowl of Garbh Choire Mor. I followed the edge round past the summit of Carn na Criche, before a mossy slope took me down on steep, loose ground. I skirted under the crags before cutting upwards, quickening my pace to reached the snow patch whilst it remained in sunshine. Aptly though - for a snow patch that probably receives no sun at all in winter - it had retreated into the cool of shade by the time I reached it. As the melt-water dripped away, it was an odd feeling to briefly share the final days of a snow patch that had only melted on a handful of occasions in 100 years. The snow I was touching had fallen in 2006 - a lot had changed in those intervening years in more ways than one! I finished my lunch with the odd sound of gravel tumbling from the surrounding crags, including the Sphinx pinnacle that has given its name to the snow patch. However I had a long way to return so eventually set off again, stepping back into the warm sunshine, and boulder-hopping down into the glen floor. I found the walk back along the infant and boisterous River Dee very enjoyable, stopping numerous times to photograph the tumbling white waters with the blue sky, multi-coloured grassy and moss and rocky mountain backdrop behind every aspect. The bizarre building that is the Garbh Choire Mor refuge was investigated. It looks identical to a large cairn from most directions, but in a winter blizzard the aesthetics would be irrelevant to the life-saving shelter it could offer. Having crossed the Dee for the last time, a short stretch of heather bashing took me with great relief back onto the Lairig Ghru path. There are few sanctuaries more treasured to a tired hill walker than a well-worn path after miles of uncertain footing. I passed the time munching through my remaining food rations, one grape or orange-segment at a time to keep my mind occupied, gazing over at each landmark I passed. 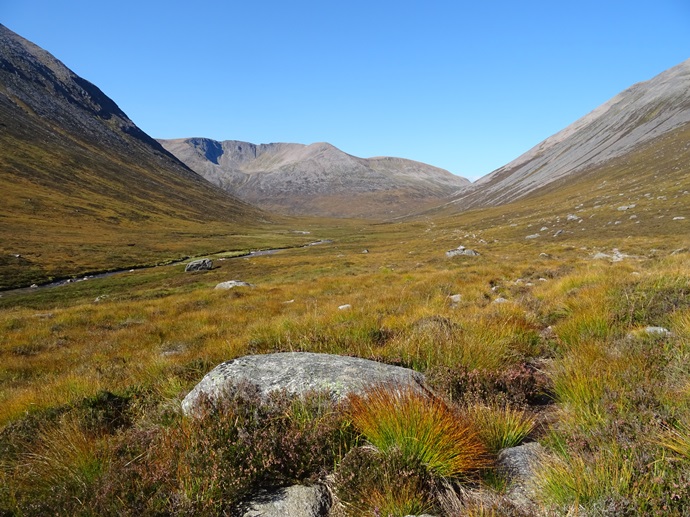 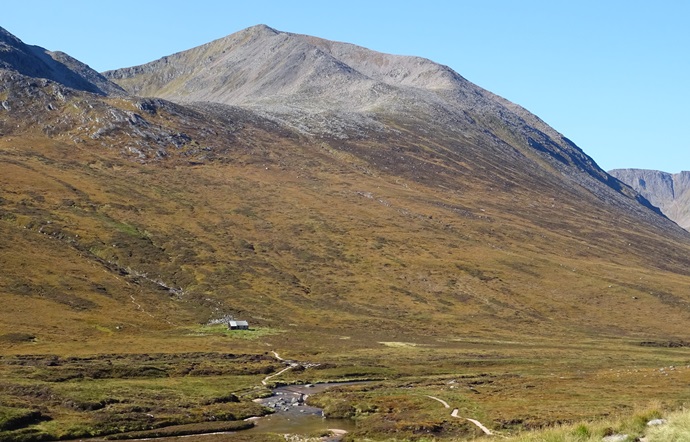 With some feeling of dread I retrieved the bike and resumed the tussle that was progress along the narrow path, ankles and pedals in the firing line again. Another big effort to drag the bike through the rushing waters of the River Luibeg, and - sanctuary - a wide enough track to cycle along. The journey homewards was sheer enjoyment with one moment of interest, being propelled over the handle-bars having misjudged the bikes ability to make it through a bog, I continued, the front wheel didn’t! Wet boots and mud up to the knees was a worthy price for a magnificent day on the hill, and memories to last a lifetime 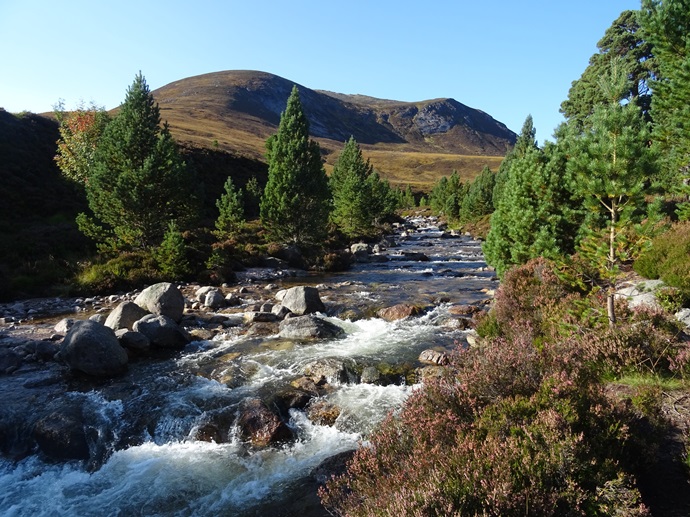 As you say: "A superb route savoured in ideal conditions."

Excellent report, what a great day in some of our wildest lands.

Would love to re-visit all three. Did the first two on consecutive rainy days in 2004, so would love to return with the sun on my back to really savour them. The Cuillin? Can't wait to go back. But not ideally located for one based on Deeside!

Closer to home I'd like to redo the Stuic route up Lochnagar. A similar Grade 2 scramble to Angel Peak's NE ridge as I recall.

What an interesting idea for a beautiful day, and a really enjoyable read!

Your report has sorted that and a fine report it is too, really enjoyed reading it and well done

. Well in, and always good to read of something a little different.
I'm up in the cairngorms next week for a few days - a combo of a few hills in the area ( no climbing for me though).
Hopefully the weather picks up.
Cheers again

that was smashing - what a gorgeous day!

What a fantastic day and great report. Angels Ridge has been on our list for sometime, one day we will get there, and I am taken with your descent route. thanks for posting

Superb! Looks like a wonderful day - excellent photos and very well written. Thanks

Cairngorm creeper wrote:What a fantastic day and great report. Angels Ridge has been on our list for sometime, one day we will get there, and I am taken with your descent route. thanks for posting

Long rough descents have often been the scourge of a day for me.

Experience tells me it's better to stick close by the burn/river. Ironically can be a bit drier on the river bank and you have the interest of the waterfalls etc. Plus more likely to find traces of a path there.

A great little scramble - probably ignored by most people as it takes so much effort to get to the foot of! The sunshine and Autumn colours definitely add an extra little something to it. Last time I was up there (2014) was only a couple of weeks earlier season-wise, but it was a lot greener.

That was a great read and photos

A fabulous day for you

Top
27 people think this report is great. Register or Login free to be able to rate and comment on reports (as well as access 1:25000 mapping).