Between The Peaks on The Breariach Traverse

Between The Peaks on The Breariach Traverse 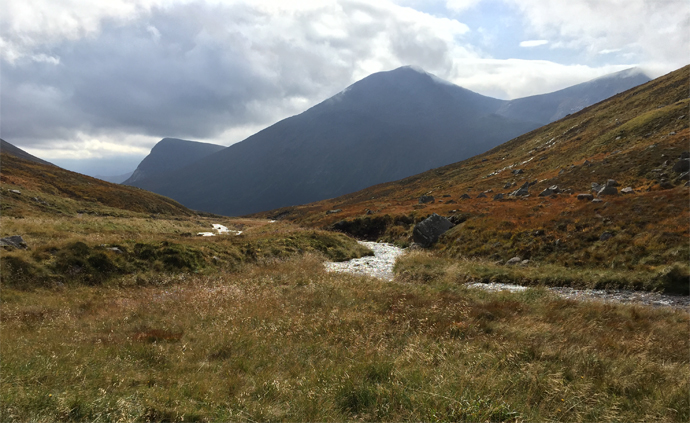 Devil's Point in the distance

I opened the two doors to the Corrour bothy and entered the room that was pretty much empty except from some chairs, a fireplace, some cloths on the floor as beds, and a girl preparing her food. We started to talk and I got the impression that she didn’t really like me. Perhaps because I was wearing my jeans and sneakers and laughed when she pointed that out, and at the same time claiming that the paths in cairngorm are really easy to walk, and that I might change my trousers only for the Munro accents the coming day.

In fact, I came walking all the way from Glen More and was pleased to find out, that in dry conditions, the path I was following was excellent. I’m sure that it was to some amusement for my fellow hikers, to see me jump between the rocks in the Chalamain Gap wearing fashionable city clothes, and with a paper cup of latte still in hand! But I manage well, and it felt like I was sneaking into paradise through a hidden mountain pass without really belonging there. And isn’t Cairngorms beautiful when you enter Lairig ghru and the sun is shining, and the landscape stretch far into the distant? 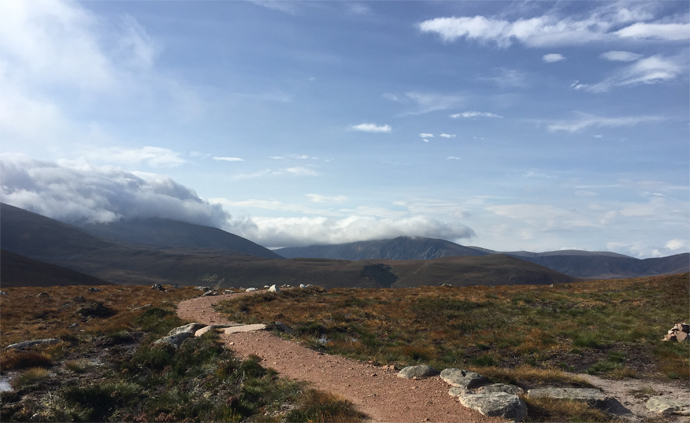 It is a grand view and an excellent path for sure, and to whomever laid out all those big blocks of stones as stairs on the steeps and for water to clear from the paths I’m grateful, and it is an achievement worth to admire. It was a really long walk thou, and I have to admit that after miles of walking passed some of the boulder fields in the Ghru my feet hurt, and that sneakers after all doesn’t give the needed protection. Still it went fast and around three o’clock in the afternoon I could see the devil’s point in the distant.

Well, she didn’t seem to like me, and I thought this would turn out to be a long silent and akward evening. With not much else to do I therefore got comfortable on the floor. I had the lower “bed” in the corner of the room, and as more people entered the bothy and it was getting darker outside I found myself mostly observing the events that started to take place from the background.

First two young lads entered the bothy after their quick visit up to Devil’s Point, and they got a fire going which was much appreciated. At one point a man from Latvia entered the bothy to eat and warm himself after he had quitted his plan to do the whole Braeriach traverse in one day. After he had left a man from New Zealand arrived, then an older gentleman with English accent, later in the dark two Germans guys who had been lost up on the Braeriach Ridge appeared, and even later a corpulent Sir who had struggled through the Lairig Ghru in heavy winds join us.

People cooked their food, talked about different routes, the weather forecast, about potential mice in the bothy, and looked at map until the older man, who by the way could answer most questions about Cairngorms, declared that it was time to sleep. He first began to brush the floor clean, and soon after everyone had found a place for their sleeping bags. The alarms were set for 6.30am.

And all of us woke up more or less at the same time, and I was anxious to get going. I was not sure how long it would take me to get back to Glen More, especially after talking to the Germans who had arrived at 7pm the night before after leaving from Aviemore in the morning.

I wish I had some nice pictures to share, especially after such a long walk, and especially after my personal best of doing four Munros in one day, but the fact is that the weather was crap. I walked the whole day in rain and fog, and it wasn’t pretty.

8.08am
I made it up to the summit on Devil’s Point and it felt good, it felt easy, I was prepared. 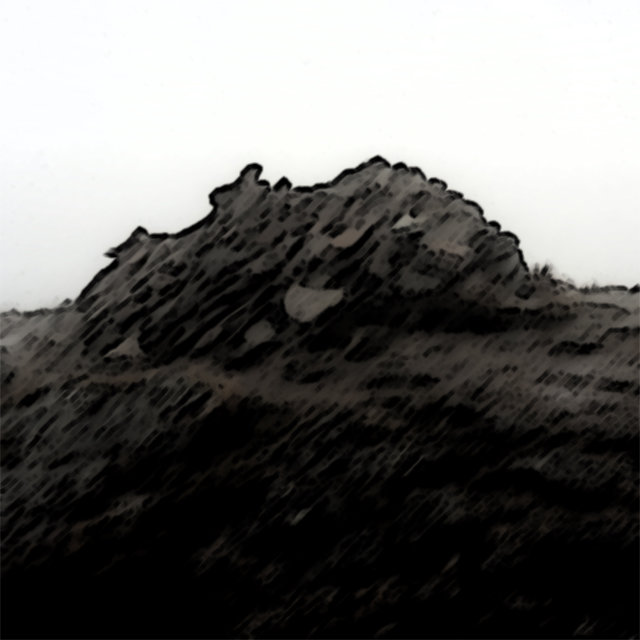 The summit of Devil's Point

9.33am
I made it up Cairn Toul and it felt good. There were a lot of stones and scrambling and the path faint but I felt strong. 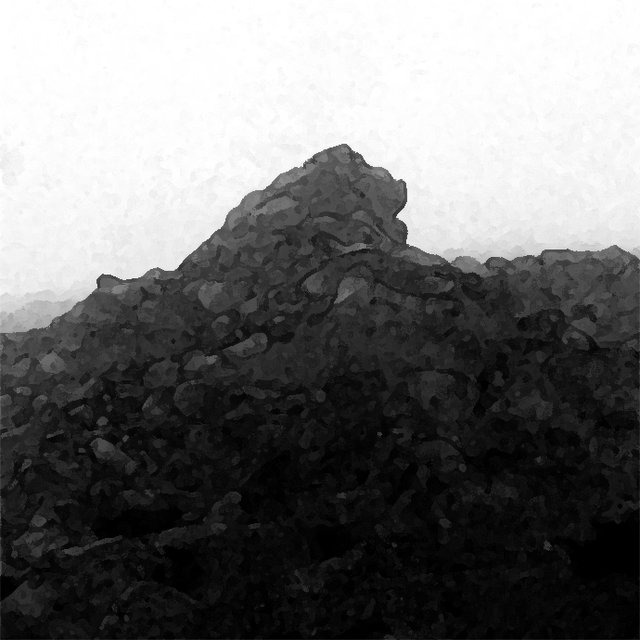 The summit of Cairn Toul 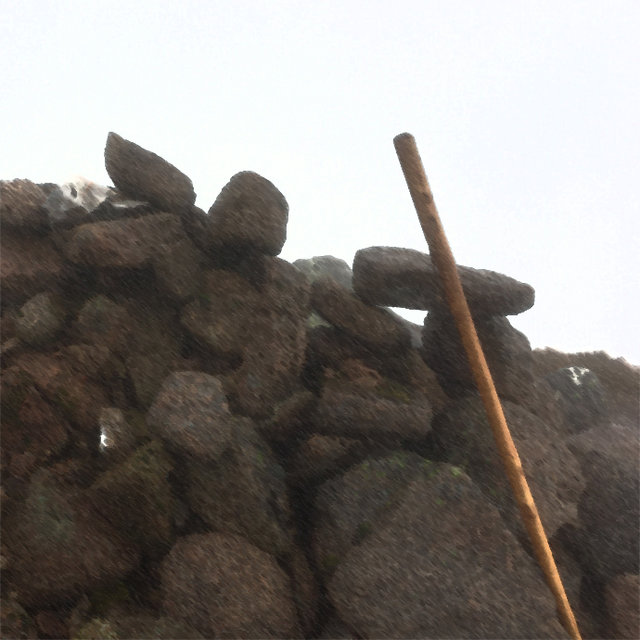 Walking stick at the summit of Angel's Peak

11.42am
I had made it up to the summit of Breariach, and it was tough. The cover of my backpack had blown off and I was too tired and my fingers to numb for me to put it on. I thought to myself that I should put some snickers bars my pockets so I didn’t have to open my backpack to get them again, but I forgot this rational idea as soon as I was eating. I continued and my bag was some extra kilos heavier because soaked in water. 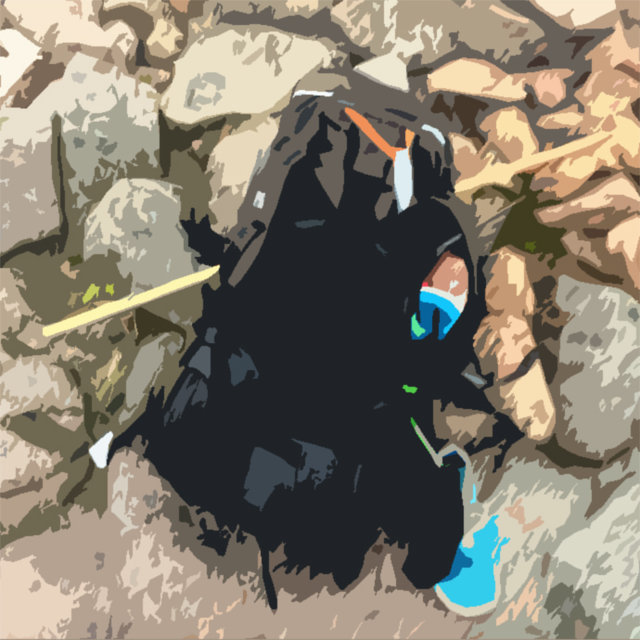 Backpack at the summit of Breariach

This is where my phone ran out of battery and I lost track of time, but I know that to get to Glen More from Breariach took me more time than to walk up and down all the Munros. In the Chalamain Gap I was extremely slow, and every stone was difficult to climb. It took be forever to even decide how to get around these rocks, because my mind was lagging as much as legs were tired. What was easy the day before was now a challenge, and so subjective is our experience of the world that even old stones remaining much the same for decades, can change their character in an instant in fragile thoughts of a men.

But I must say that after completing the Breariach traverse, I carry some hope, after walking in both in rain and sunshine, in pain and in pleasure, and from the Devil’s point to the Angel’s Peak, that there is a slight chance to reach objectivity. Because it is almost as if the truth become more visible when the experience of life is fluctuating between the extremes…