The best forecast of the weekend was for Saturday, but high winds were forecast at hill/Munro level. Helen was keen to visit the Island of Erraid, having recently re-read “Kidnapped” by R L Stevenson, the son of Thomas Stevenson the ‘builder of lighthouses’. Erraid features in the book, and is now home to the Findhorn Community who occupy a lovely little row of cottages facing the Ross of Mull. It also has an old observatory, restored inside to provide a seat and window overlooking the coast and many little rocks and islands offshore. Then there’s the high point, Cnoc Mor, at 75m giving good views all round. Erraid is accessible at low tide by walking across the sand. This sounded like a bit of an adventure, so 4 of us set off to reach the beach an hour or two after high tide.
After driving as far as we could on a single track road, and being faced by a gate indicating who lived beyond, we turned and drove back only a few hundred yards to find a grassy parking area with very small blue “P” signs on the fence posts: very easy to miss this. Parking area near the end of the road

Togged up and ready to go, we walked back towards the gate, went through and passed the cottage with bits and pieces of farm-ware, sea-ware and geese basking in the sun. 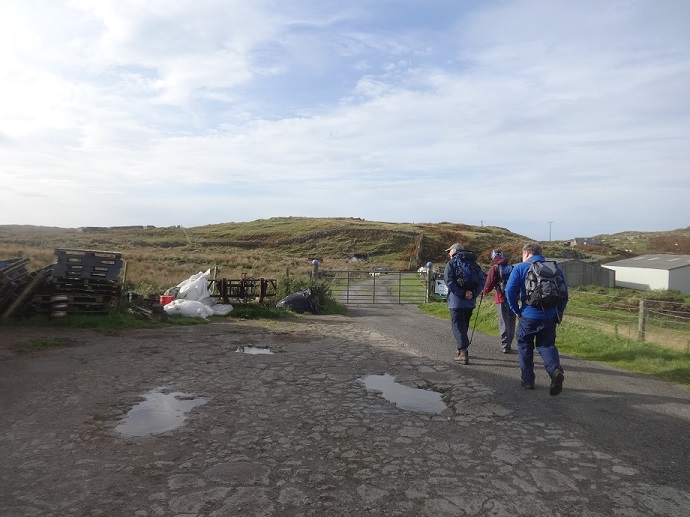 Walking towards the gate 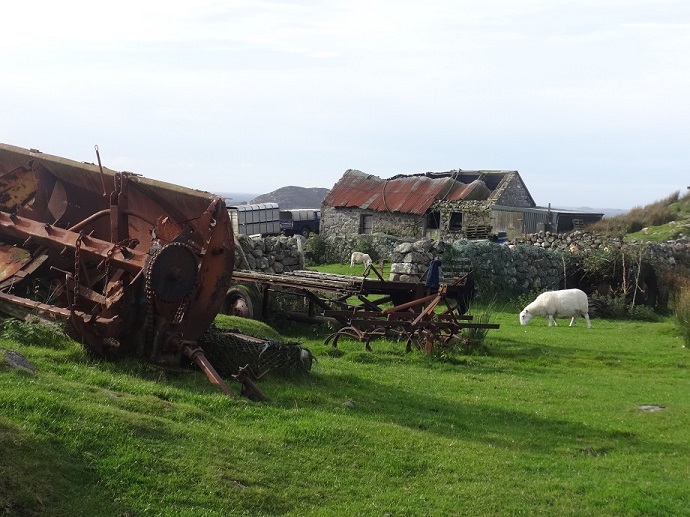 ... past the cottage and old farm machinery

The track continued down towards a bay, where we followed the track swinging to the right, reaching another bay. 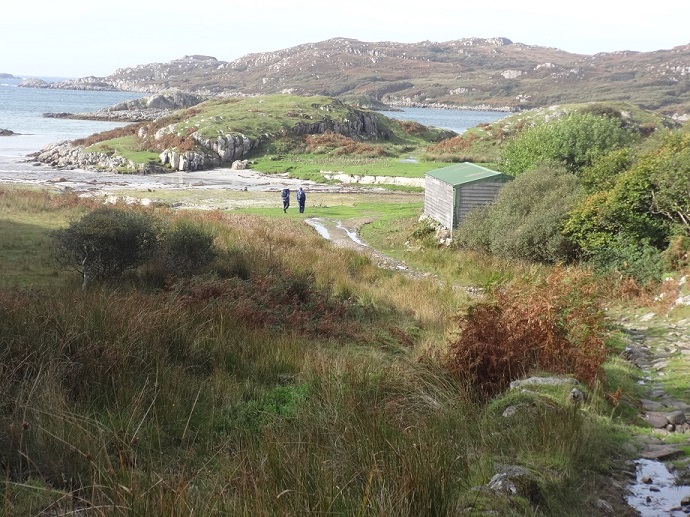 walking towards a bay 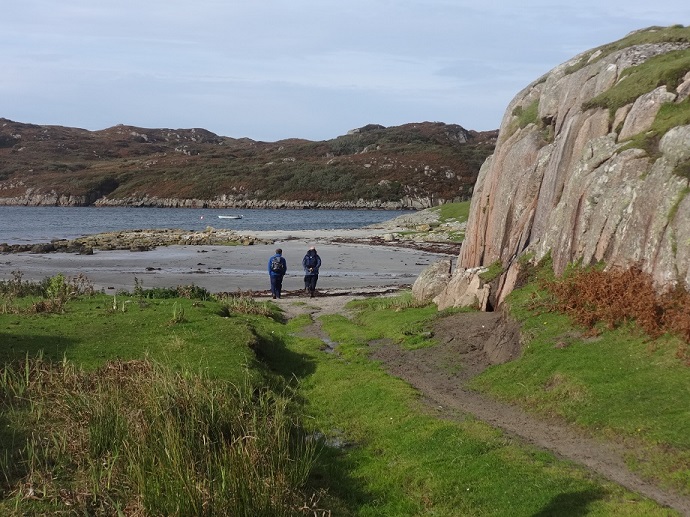 swinging round to the right - another bay

Here we were faced with a short but wide causeway of exposed sand and the island of Erraid at the other side. At two hours beyond high tide, we were able to walk further round on the sand and get on to the island very easily. 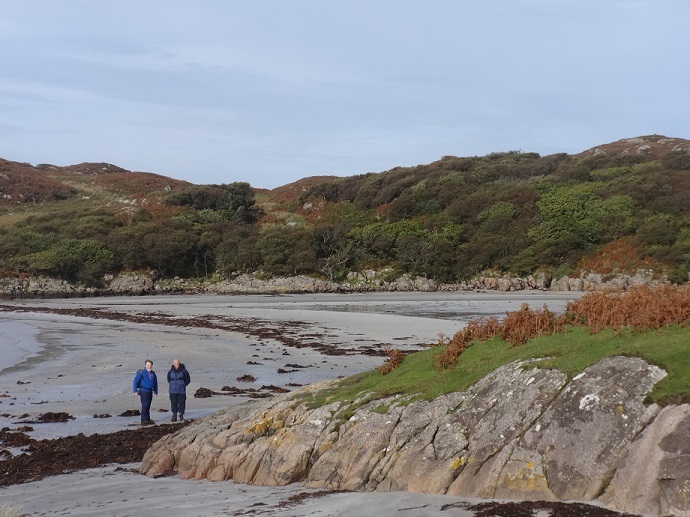 the sandy causeway with Erraid beyond 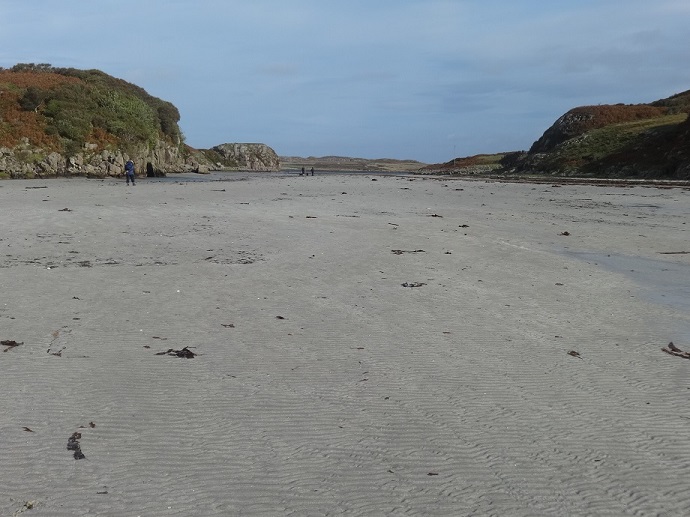 A short walk across grassy meadow took us to a white cottage, another small bay and a “statue” made of flotsam and looking distinctly person-like. 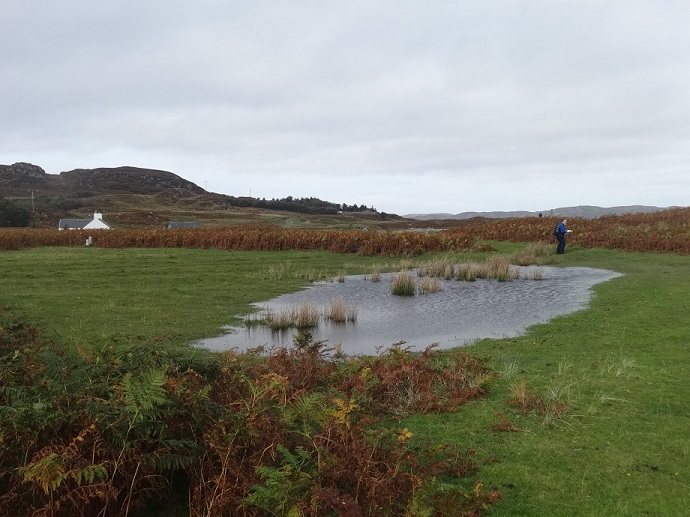 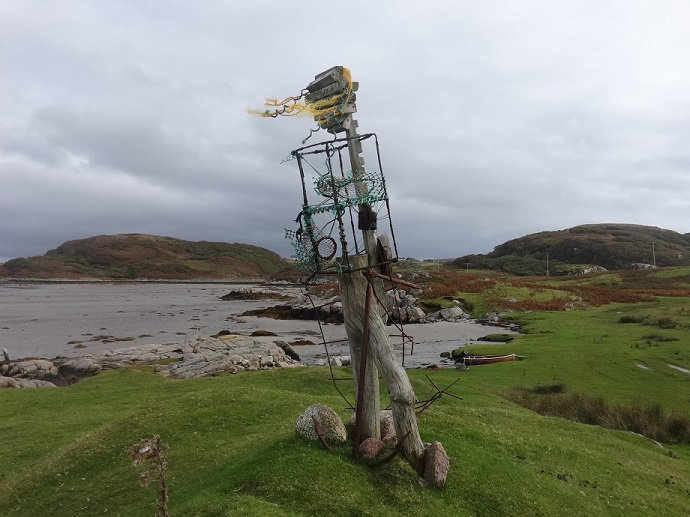 Walking round this bay, we continued on a track which soon met the wall by the row of attached cottages now used by the Findhorn Community. Beyond this protective wall was a productive garden cultivated by the Community. Their “jetty” was close by. The cottages were built in the latter half of the 1800s by David and Thomas Stevenson when they were building lighthouses a few miles away. At the end of the wall, we turned left through stone gateposts and for a few steps walked toward the cottages, stopping to chat briefly to a couple of residents living at the Community. Here we saw an old sign on a gate warning of a 40 shilling penalty for not closing it! We didn’t have that kind of money, so just as well we didn’t need to go through it! 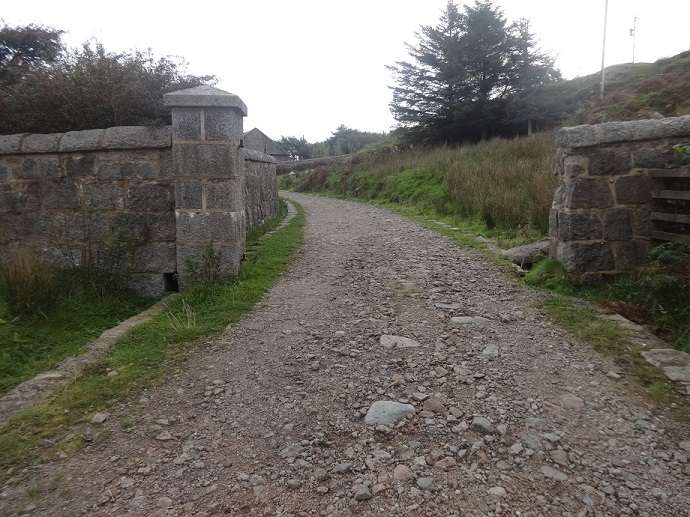 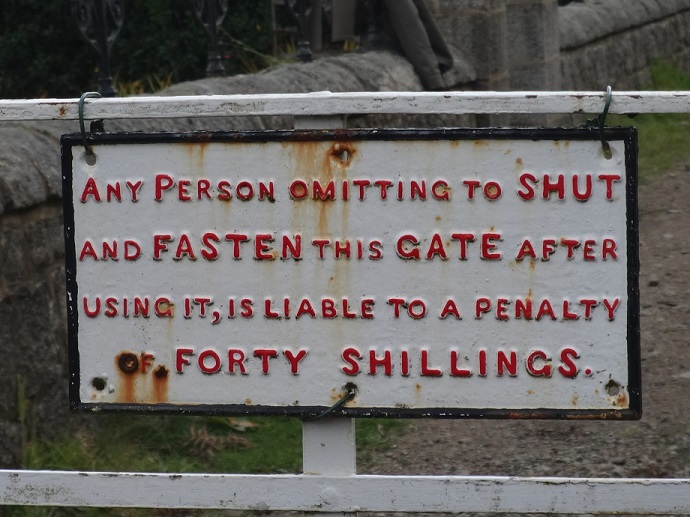 Turning right just before the cottage, we continued slightly uphill on a track, through a gate and on past the disused granite quarry of the mid 1800s, and a ruin of a cottage of the same time. The quarry was started by the Stevenson family in order to use the rock in the building lighthouses. The track eventually became a path, somewhat wet in places, which began to go uphill. On the right, stone slabs enabled a climb to a little knoll which was topped by a white structure, known as the observatory. We went inside to find it well maintained, with a little bench and a window looking out to sea, and some information on the two lighthouses built by the Stevensons. 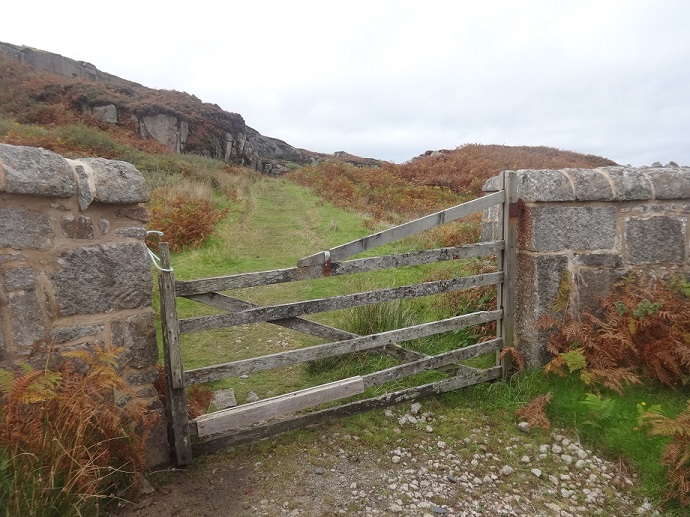 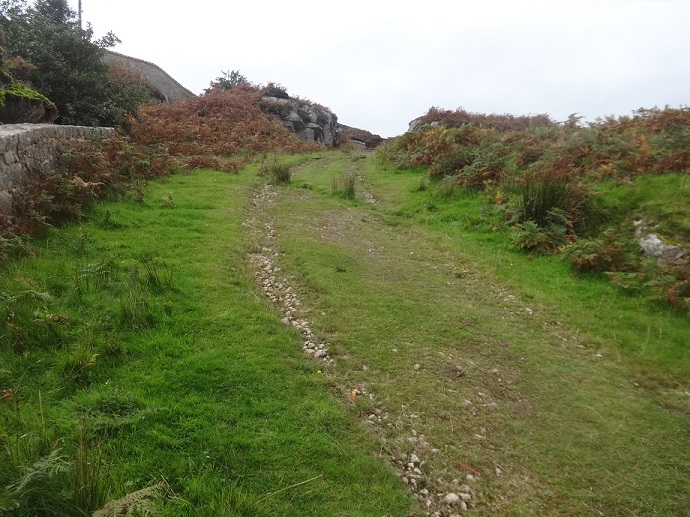 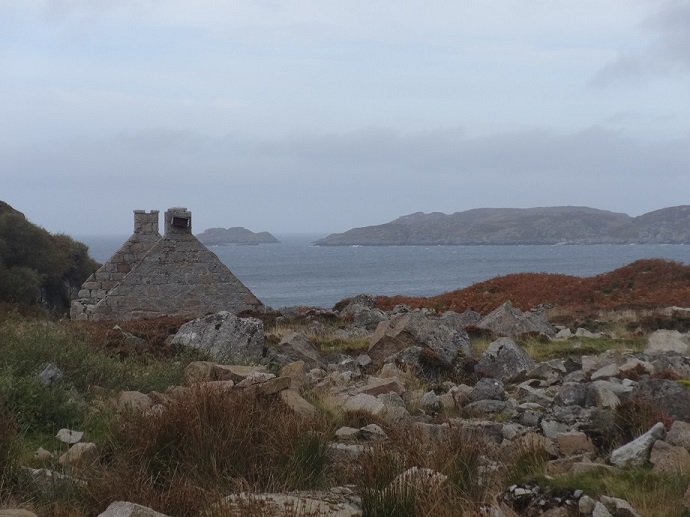 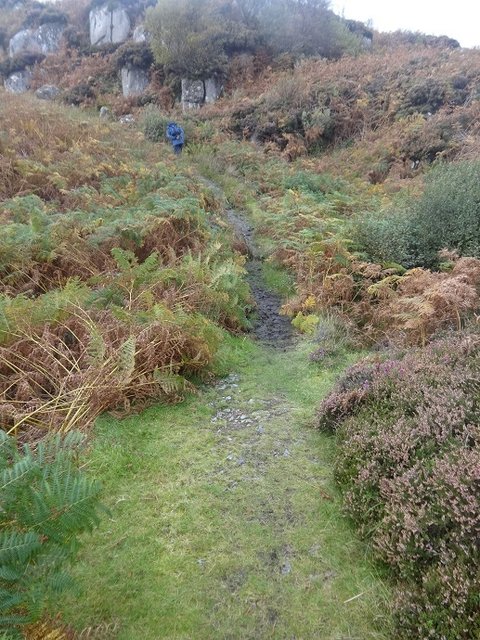 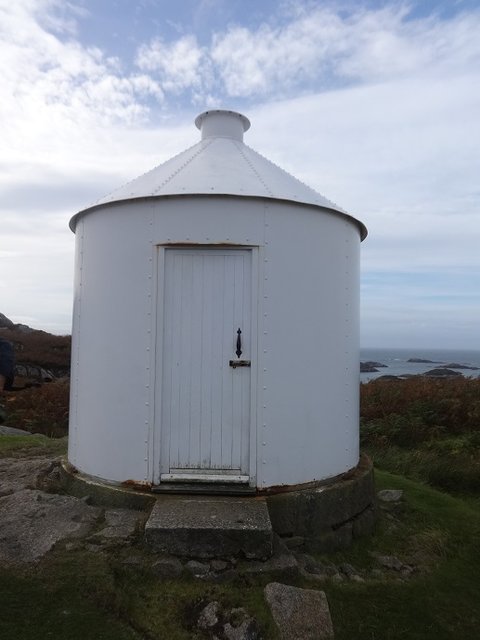 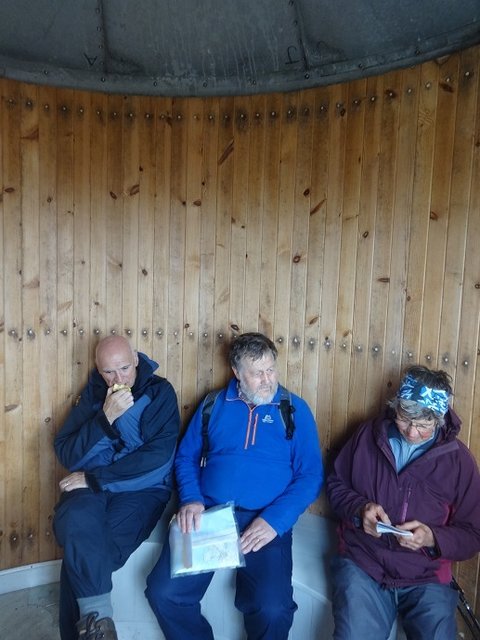 Our goal was to go to the highest point, which we heard from various sources was pretty boggy. As the previous day had been wet, we were not hopeful, but with walking boots and gaiters we were not going to be deterred. We did encounter a flat boggy area where the “path” disappeared, but we seemed to find a route through and once on the last short uphill section, the grass was short and there was also a path leading round and up to a large flat stone set in the ground, marking the highest point. 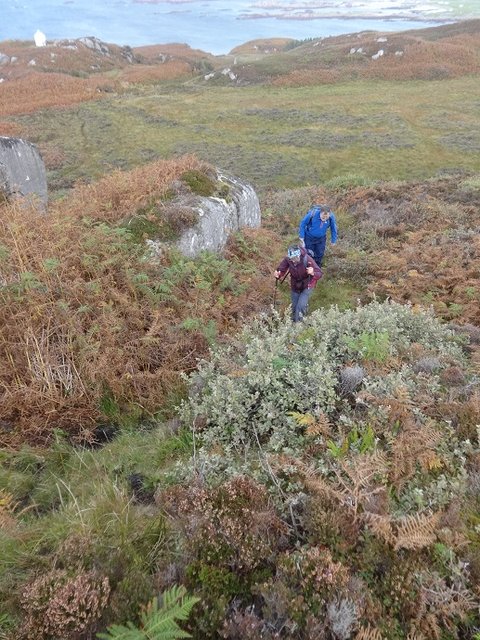 From here the views all round were beautiful – little islands, sparkly seas, remote sandy beaches, Mull and Iona. A great reward for very little effort. 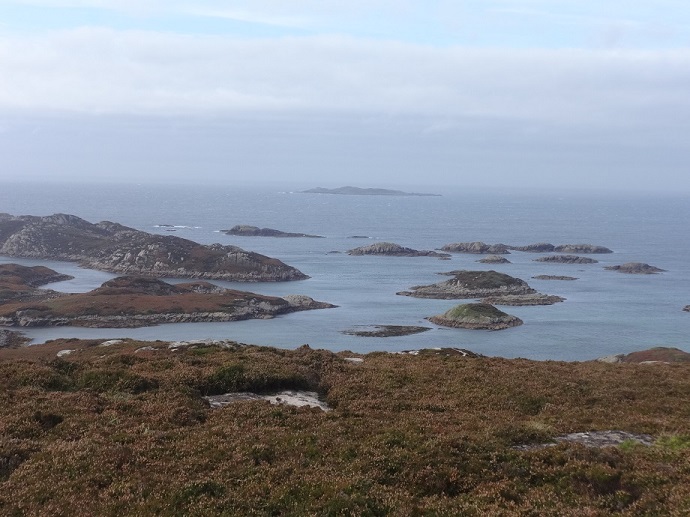 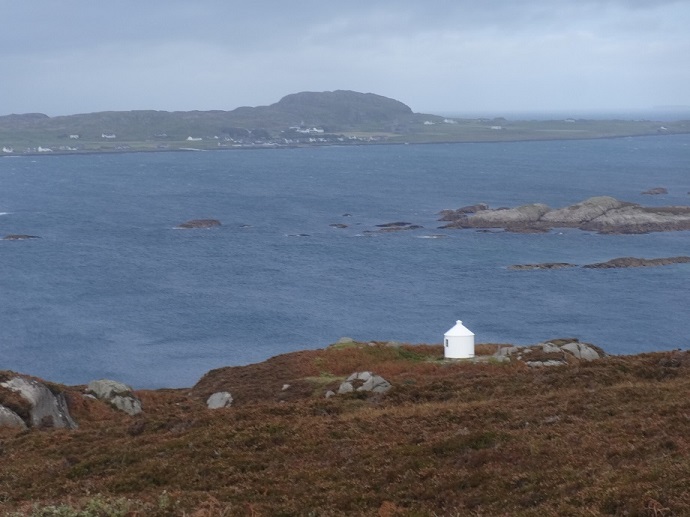 The island of Iona across the water 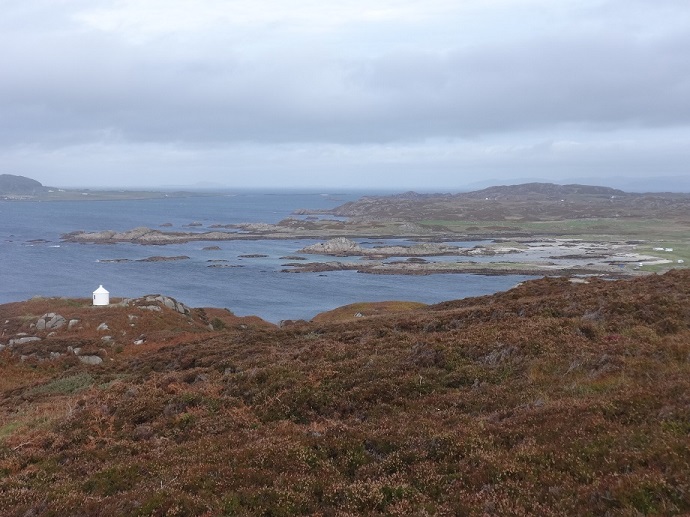 We met another two friends there, and they dropped down to a beautiful sandy cove for lunch, then carried on at that level back to the causeway. The rest of us meandered back the way we had come, chatting to more residents of the Findhorn Community, some of whom had just arrived by a small boat. After lunch near the “statue” we noted that the sea had receded even further, so we left the island at that point and walked around it on the vast expanse of sand, back to the point where we came from. 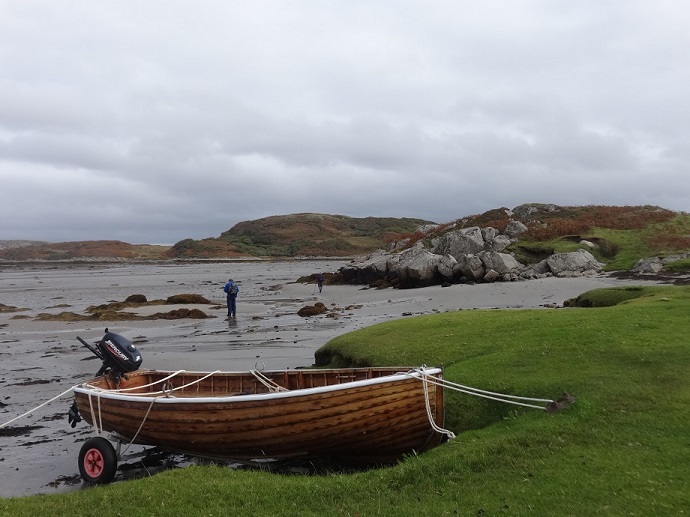 We left the island at this point... 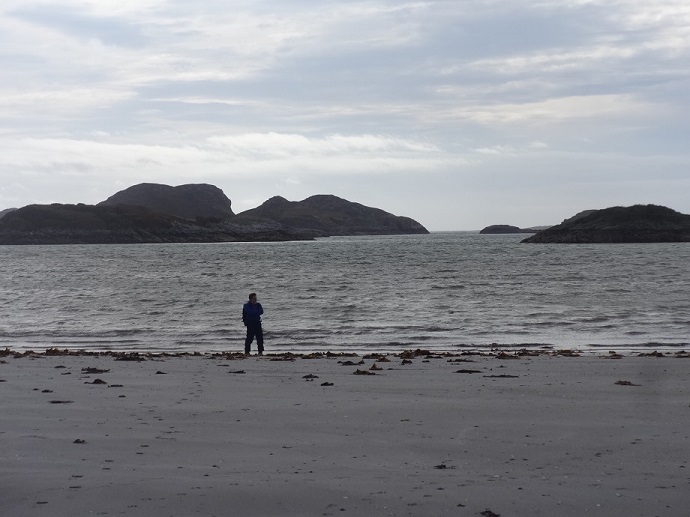 This walk was achievable well within the tide and time limitations, with a number of interesting features to enjoy along the way. Well worth a visit. For more information on the history and activities of Erraid, look online at www.erraid.com

What a lovely informative report. If ever we're back on Mull will try to go there!

Thanks Dogplodder. This wee gem is well worth a visit.

Always intended to go to Erraid.
Never knew of the existence of the nice little biscuit tin Bothy either.

Yes, it is an excellent description in words and photographs which awakened memories of my own visit in September 2020 on a bright day. It is worth walking a few hundred metres along the sands of Bagh a'Chnoic Mhoileanaich to climb a small hillock for great views of the offshore islands and a remote feel.