Deciding where to go on a day that The Met Office chnaged its summit forecasts so frequently as to be almost useless and the MWIS were unable to be more specific than a narrow band of rain would be heavy and sustained somewhere in the Highlands, was tricky. We settled on Gulvain by Walkhighlands route and hoped the weather gods would be kind to us. . Spirits were dropping as the waters levels rose but in Corpach the rain slowed to a drizzle then fizzled out and when we started walking at 8:10 the immediate area was encompassed in an eerie blue light. Starting out in the eerie blue light

As we walked along the track the Gleann Fionnlighe woods were still mostly green, with just the birch trees turning yellow, but the surrounding hills were showing more signs of autumn. We reached the bridge across the Fionnlighe sooner than expected and although Gulvain loomed in the distance we were less than halfway along the track. Through the open woodland we could see the mist swirling around the hills, sometimes lower in the valleys then rising to hide the summits. Gulvain with a ribbon of cloud

The track became a path, crossed by a number of streams, just shallow enough to wade through with dry feet

and close to the base of Gulvain were boggy pools that seriously tested my rock jumping range. It was not long before we were surrounded by cloud and our steep ascent was marked by sound rather than sight, the roaring of the Fionnlighe, and our boots beating a rhythm of squelch, squelch splash splash squelch. As we gained height the roar of the river became a hiss and the rock under the mud muted the squelch to a thud. The crackle and crunch of loose stones under foot and the clunk of treking poles hitting rock added further percussion to our slow marching beat.
Whilst the outlook ahead was uniformly white looking back the shifting clouds provided a more varied vista. 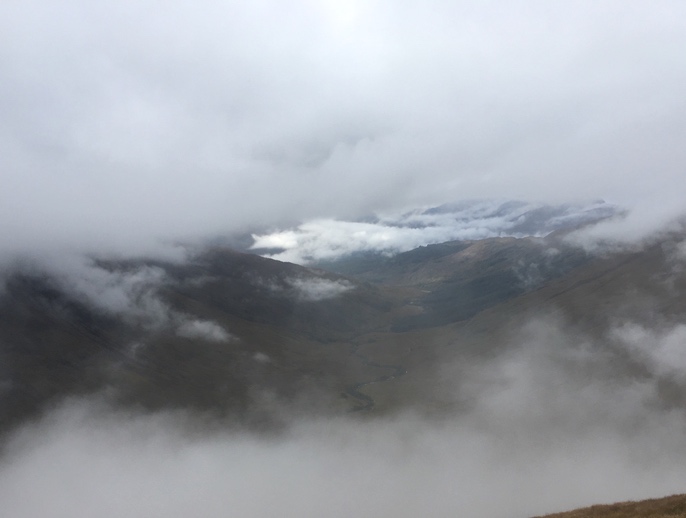 Then a return to an Island of Fog

The reports of Gulvain being a steep slog are not exaggerated, but the angle eases on final ascent to 853mt. spot point. This minor summit is marked by a cairn, followed by a short descent onto a plateau with a Lochan before the path leads uphill to the trig point. so we decided to stop for lunch Jeremy Jetboil was singularly unimpressed with the lack of posing opportunities. Revived by tea and noodles I enjoyed the final atmospheric walk to the summit and I am sure this would be a superb ridge walk in sunshine. 
We were not in a hurry so decided to linger on the summit and see if the weather cleared. Having been alone for most of the day several other walkers arrived and we passed the time of day. Jeremy had to be coaxed into action again and has threatened that in future no view will mean no brew. As we left the summit the clouds were shifting again, giving impressive and tantalising glimpses of the views that we missed, Looking back at the summit ridge Summit Ridge

Then for most of the descent we were treated to an impressive display of changing cloud formations over distant summits. Cloud to the West Ben Nevis and friend in the SE .
The boggy section of the descent was as slippery as one might expect, and going home iwith a dry bum was just not going to happen And then all that remained was enjoying the evening sunshine during the long walk out through the Glen. Evening Sun Lights up the Glen

.
The shifting cloud and the autumn light really made the day for me and with far more variety than wall to wall sunshine and we finished our day with a visit to Sammys Fish Bar just outside Corpach. Another attraction that made our journey worthwhile

Re: Shifting Cloud on Gulvain

I call it "The dancing cloud effect"

Makes for very atmospheric photos. Shame you missed the full extent of the views, Gulvain is a great viewpoint.

We did it after a dry spell of weather an the ascent path was still squelchy and gloompy, I don't think it ever dries out. That slope was one of the steepest, most annoying climbs I've ever done - maybe because it's so monotonous, especially in the clag.

A little sneak of what you see there on a good day:

Re: Shifting Cloud on Gulvain

Makes for very atmospheric photos. Shame you missed the full extent of the views, Gulvain is a great viewpoint.

We did it after a dry spell of weather an the ascent path was still squelchy and gloompy, I don't think it ever dries out. That slope was one of the steepest, most annoying climbs I've ever done - maybe because it's so monotonous, especially in the clag.

A little sneak of what you see there on a good day:
>[/img]

Dancing cloud describes the effect really well. Thank you for that photo, it does like a great viewpoint on a good day. We wondering about a return visit in winter if there were the right conditions, frozen bog, hard snow and lots of sunshine, but that may be a bit too much to hope for