Check out the vlog I made of this walk on YouTube:


So every day when I go to University I get the train from Saltcoats to Glasgow Central and on my way I ride past Lochwinnoch and the Clyde Muirshiel Regional Park so I decided I would look on OS Maps to see what was out there. I saw that there was a Sub-2000 hill called the Hill of Stake and that it was also on here, Walkhighlands.

So I had a Hill to climb now I needed a route, I had a look on here and found that there was a circular route that other people had previously done before, the route headed up through Lochwinnoch town and into the Clyde Muirshiel Regional Park visitor center and then onto the old mines and eventually up the hill to the trig point, it then descended back down the hill via a large sheep pen and out down a "path" that leads to the Lochwinnoch cemetery. I decided that I would do the route in reverse and head up the cemetery way then down past the visitor center.

I set off from my house on the first Sunday of October a headed down to the train station when I got down there I realized there was not a single soul around which is unusual as the town and train station is usually packed with people and cars. 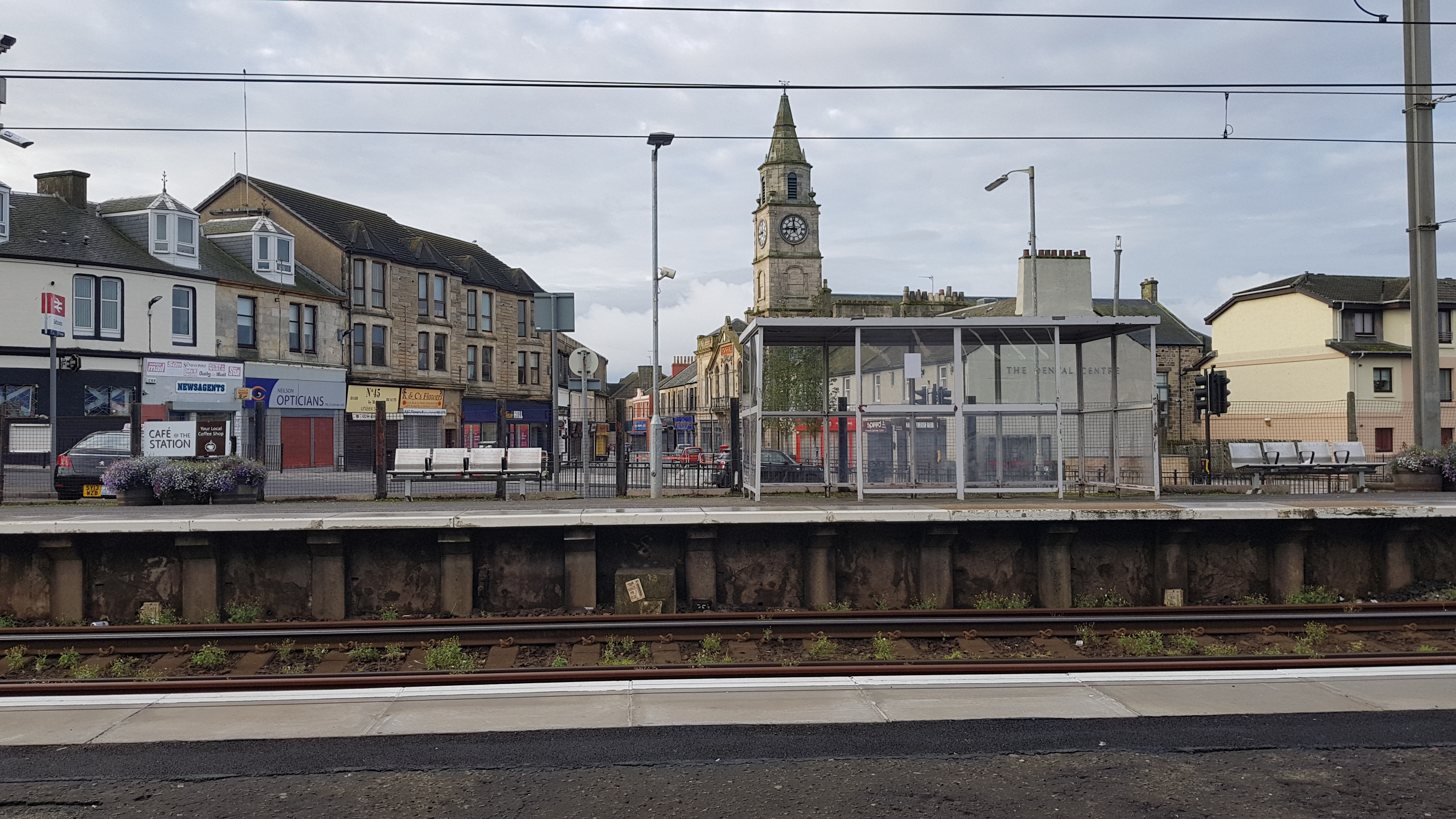 After a while, I met a man who was also waiting on the train, he proceeded to tell me his whole life story, in the space of 10 mins I had found out that he lived in Ayr, had a wife and 2 children, loved camping never went to university and that he used to be a sniper for the army.

After that the trip to Lochwinnoch was uneventful but the views to Stevenston beach from the train window were quite good. 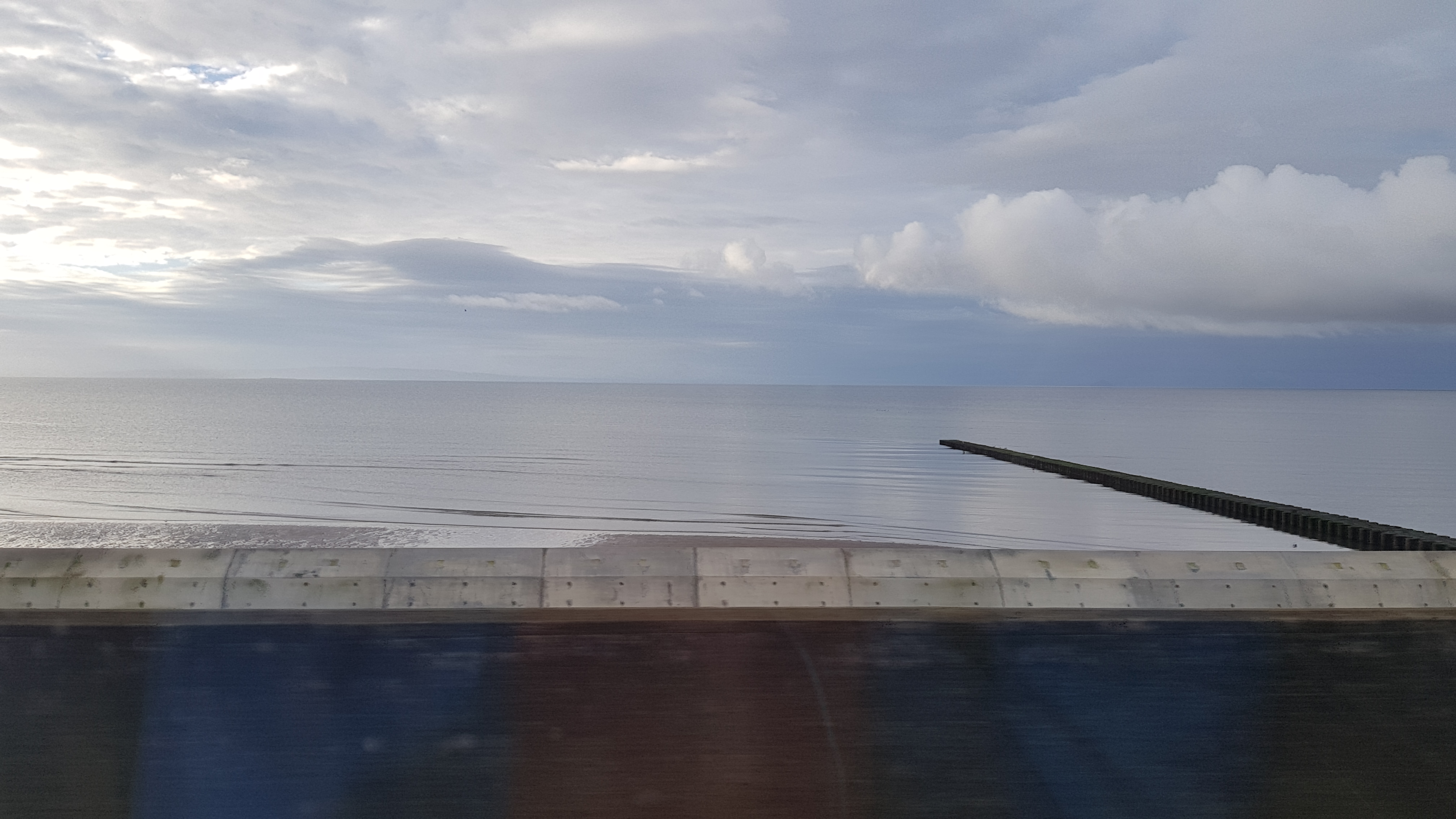 Once I got to Lochwinnoch I made no delay in getting to the start of the path up the hill at the cemetery, halfway up the path I seen a house that was on fire from a nice viewpoint and pointed out to the vlog that it was somewhat recent due to the colour of the smoke. 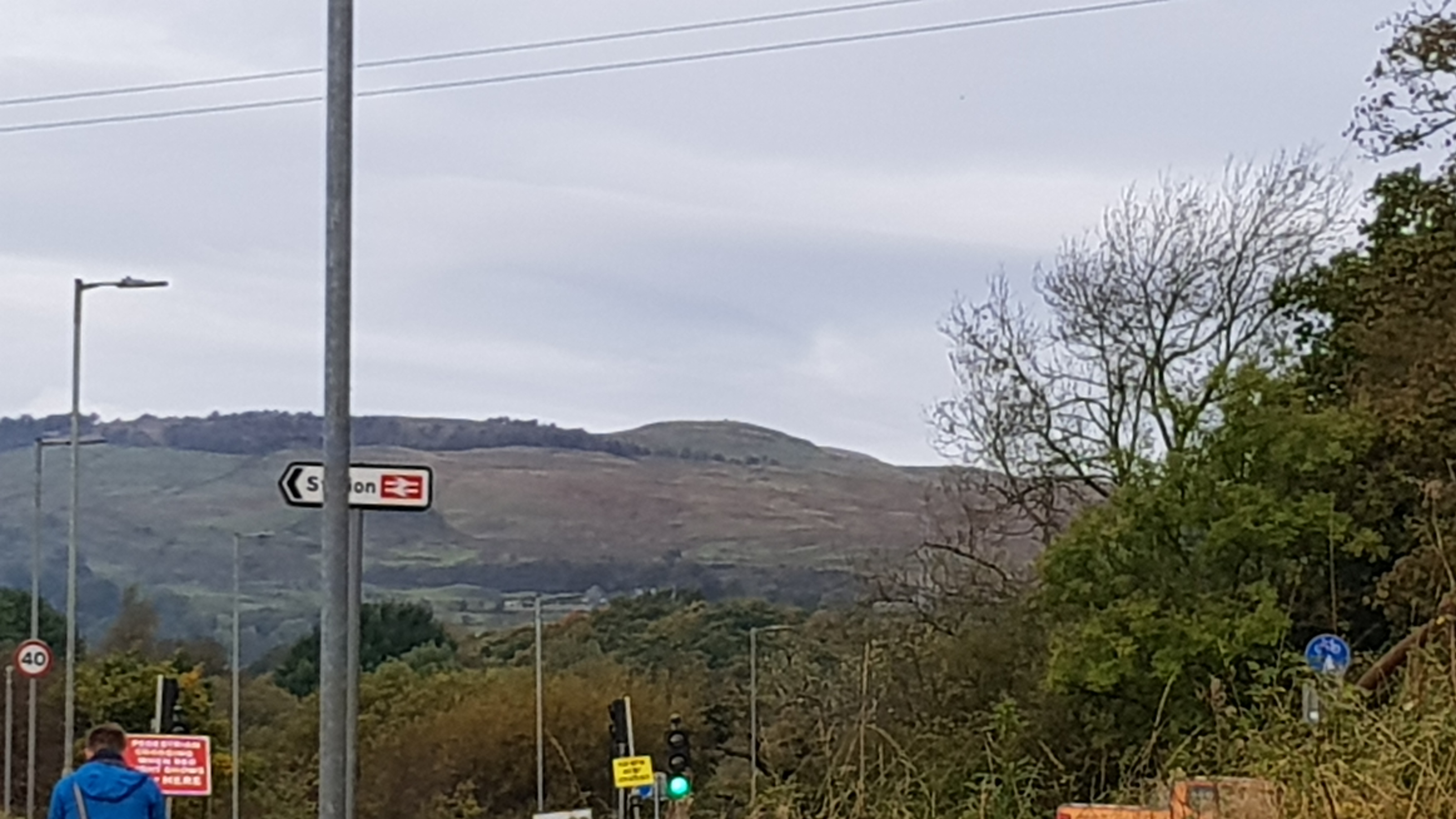 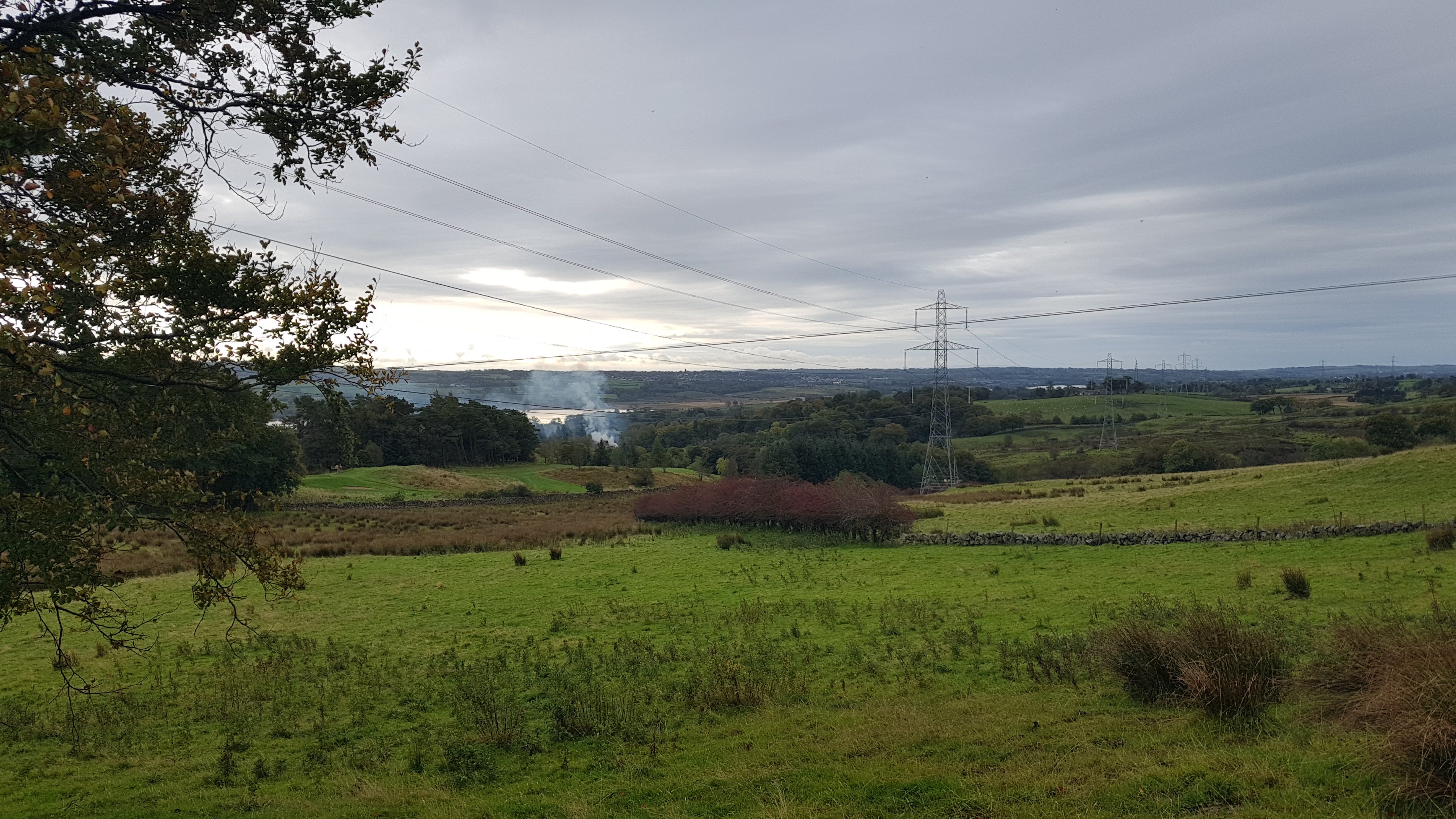 At the end of the proper track, I reach a farmhouse that I needed to pass through to get to the landrover tracks luckily the farmer was outside playing with his children and happily let me pass through his land and even gave me directions.

Now on the landrover tracks, I continued onwards towards the Hill of Stake, but the tracks quickly became very muddy and then boggy(a sign of what was to come) I decided to push on anyway and managed to get quite a good view of Loch Semple. 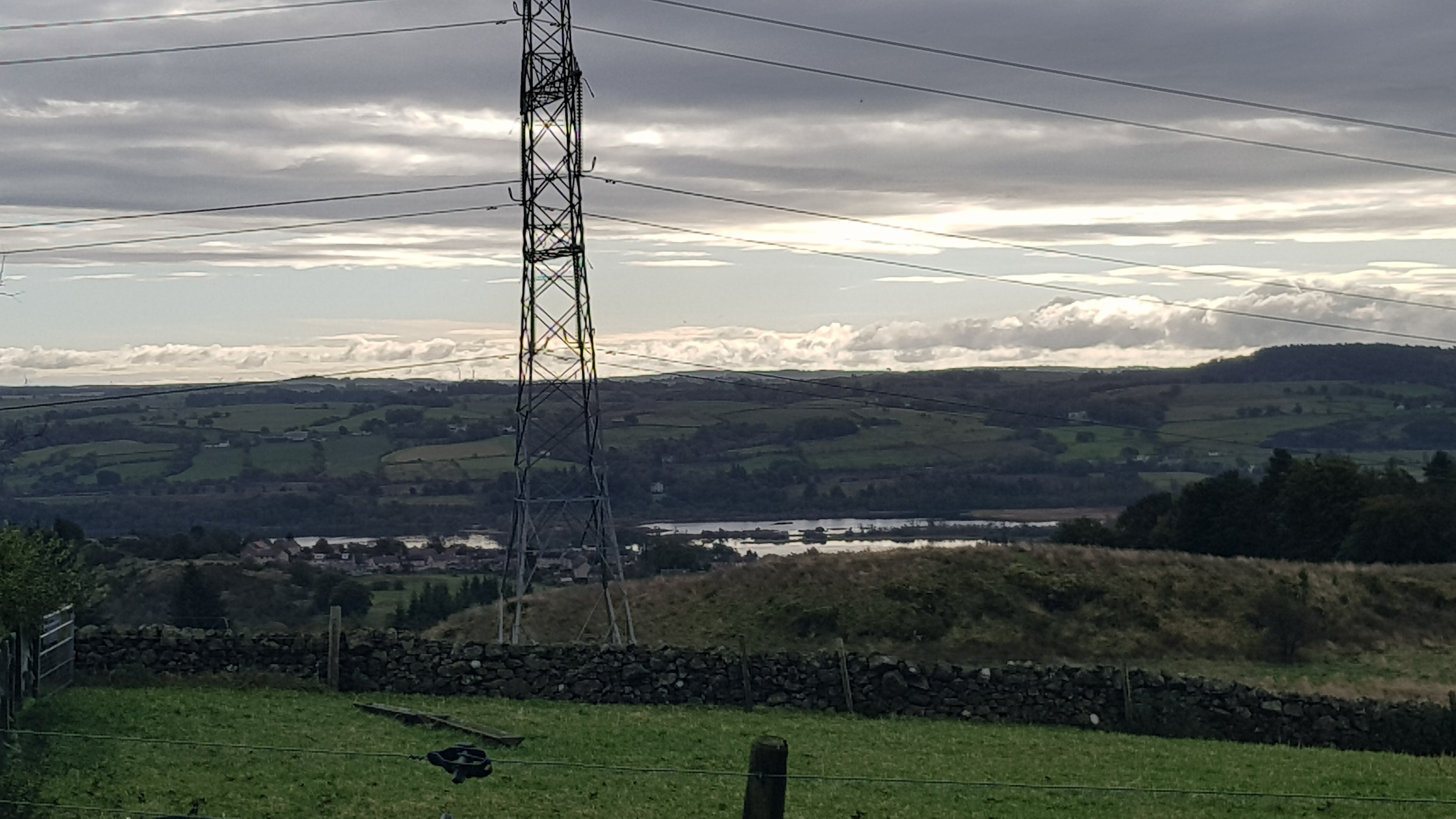 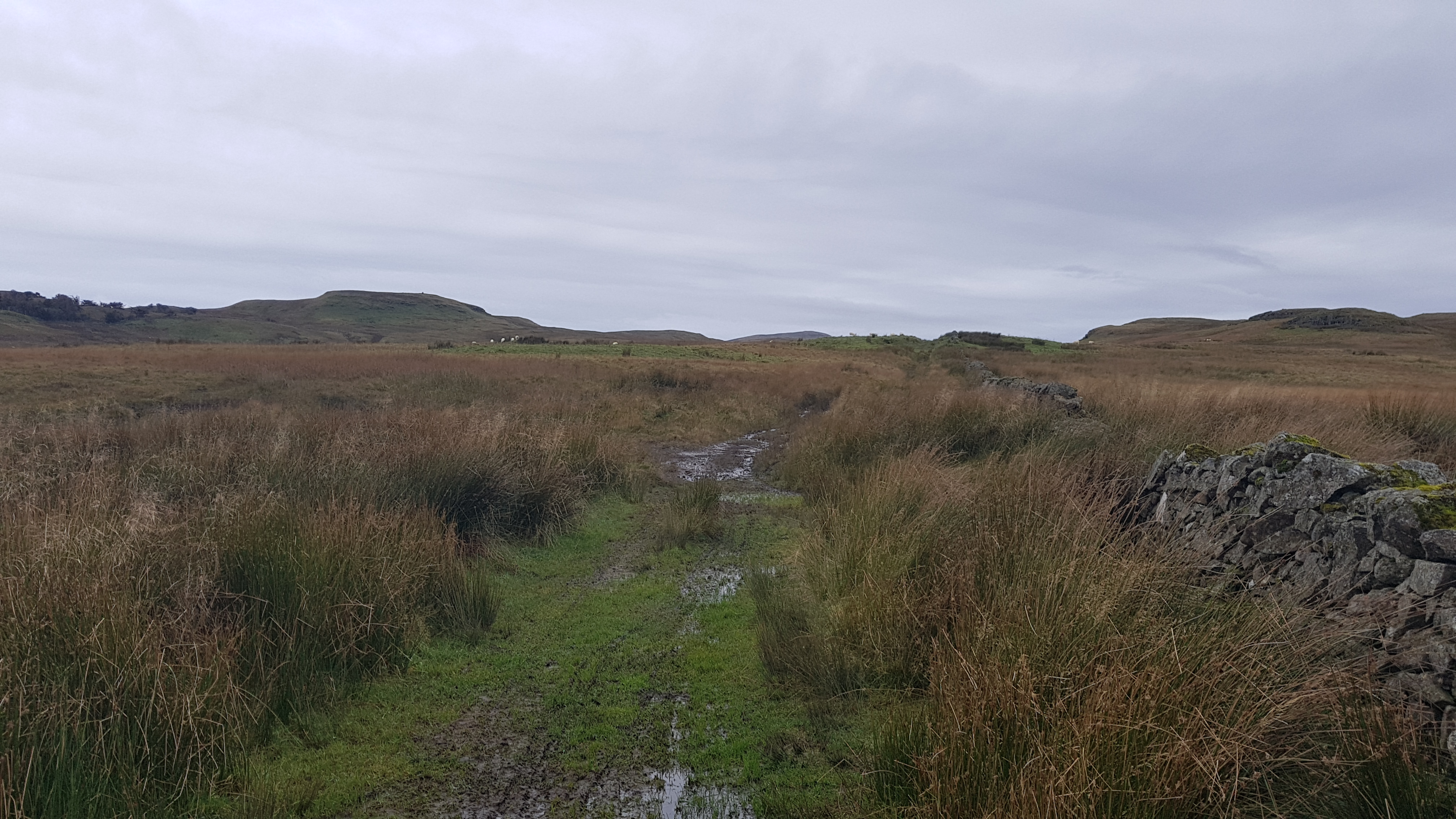 After a while, I had to cross through a sheep pen, the sheep were, for the most part, pleasant and did not bother with me that was until I came across a ram which did not like me very much and tried to charge me, so I decided not to dily daly and run away up the path.

As I continued further on the conditions became worse and worse until I came to a very small waterfall/river junction that was flowing onto the path, which at the time I thought was what was making the path muddy. 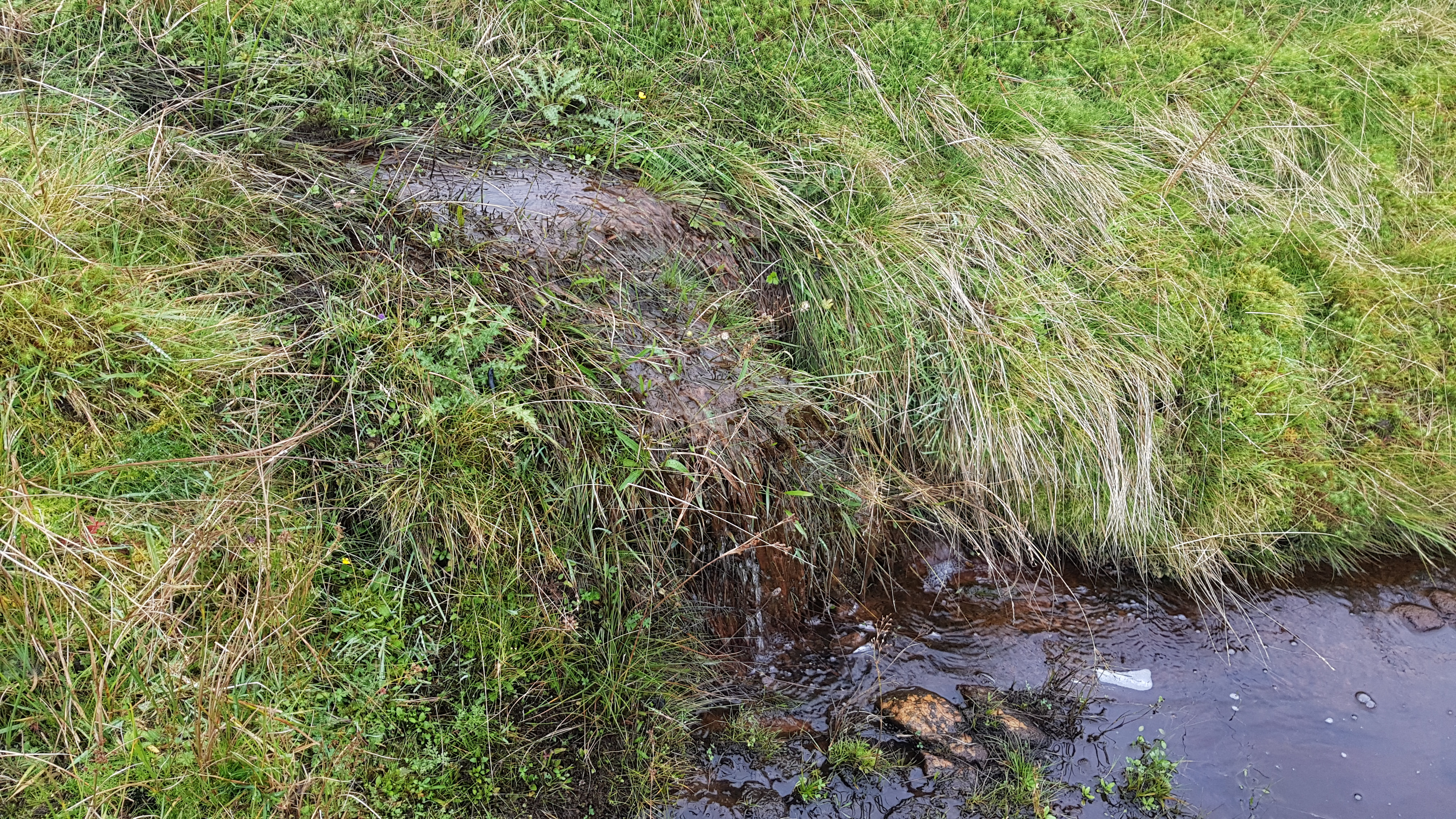 Sadly the small waterfall was not the source of the bogginess and the conditions only deteriorated further, eventually, I came to the first of 3 "Swamps" and had to try and find a way around which required me to wade through dirty mud 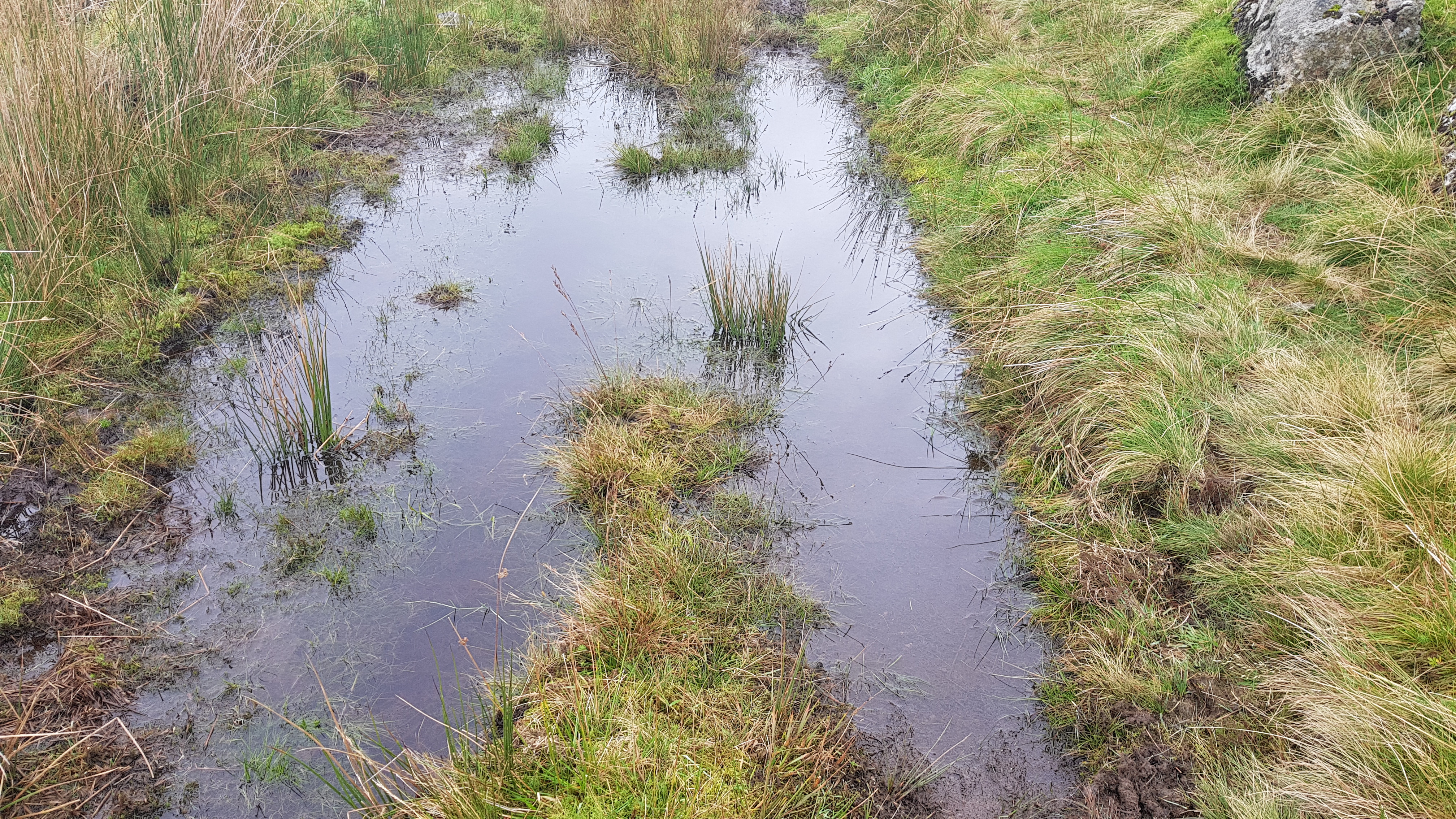 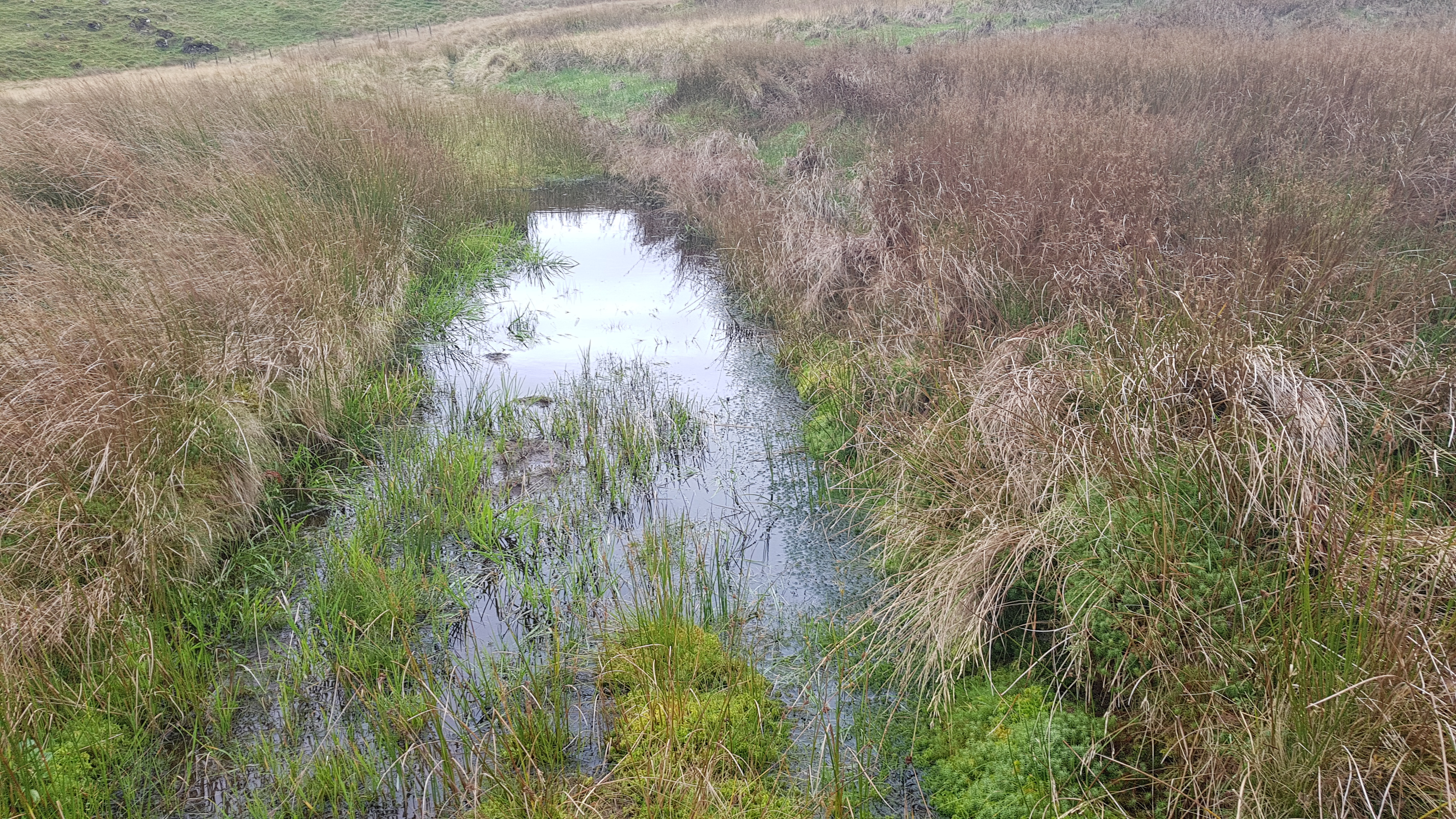 But still I continued on and waded through yet another "swamp", at this point I was becoming fed up and irritated but yet I still went on. It was at this point where I came across a huge "Swamp", I could see no way to get past it without taking a literal swim in it so I decided enough was enough and turned around and headed back to civilization

the only problem now was that I had to go back through the 2 "swamps" I had previously crossed already and also avoid the angry sheep.

On the way back down I managed to get some very nice views of the town and the surrounding lands. 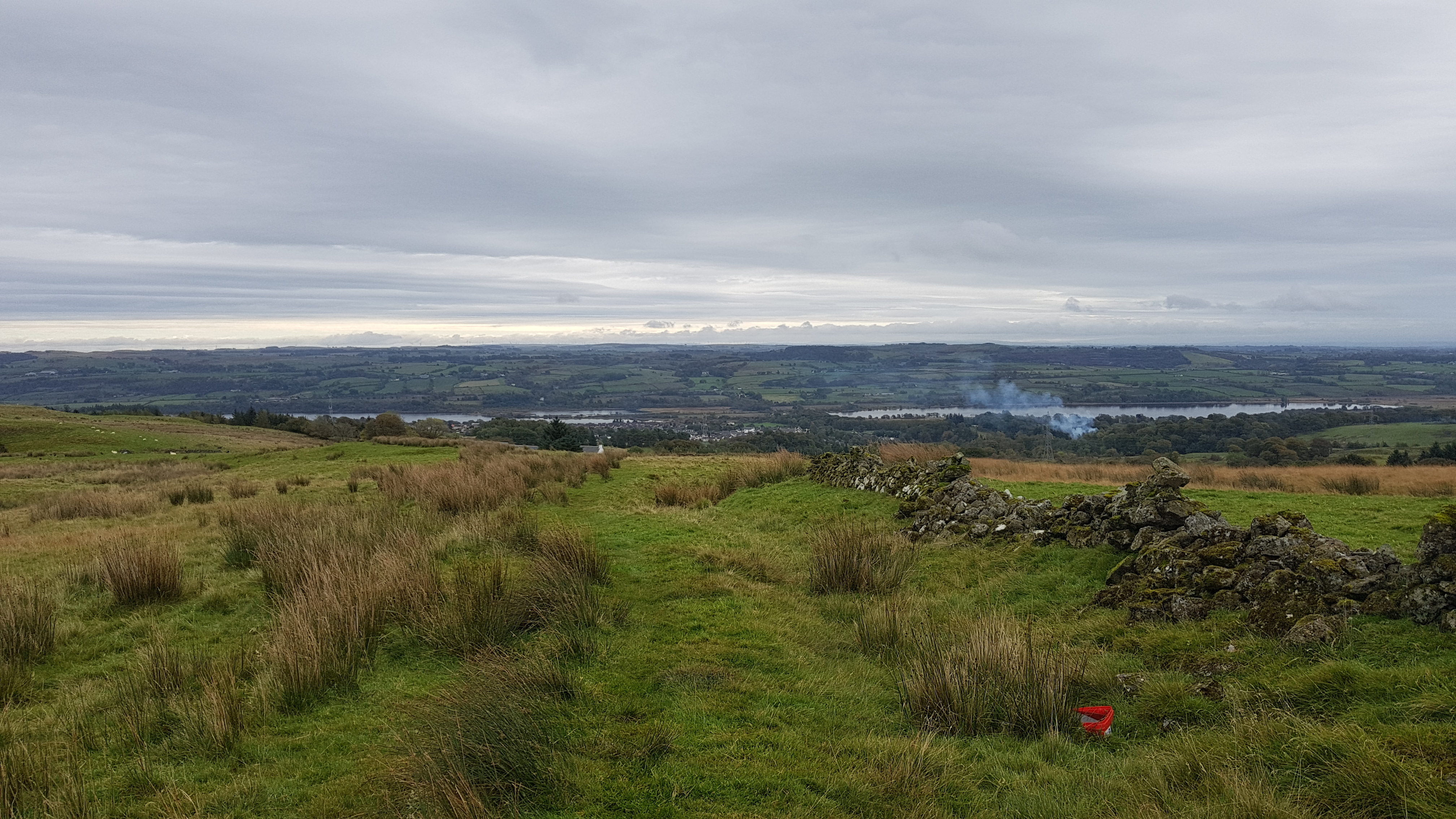 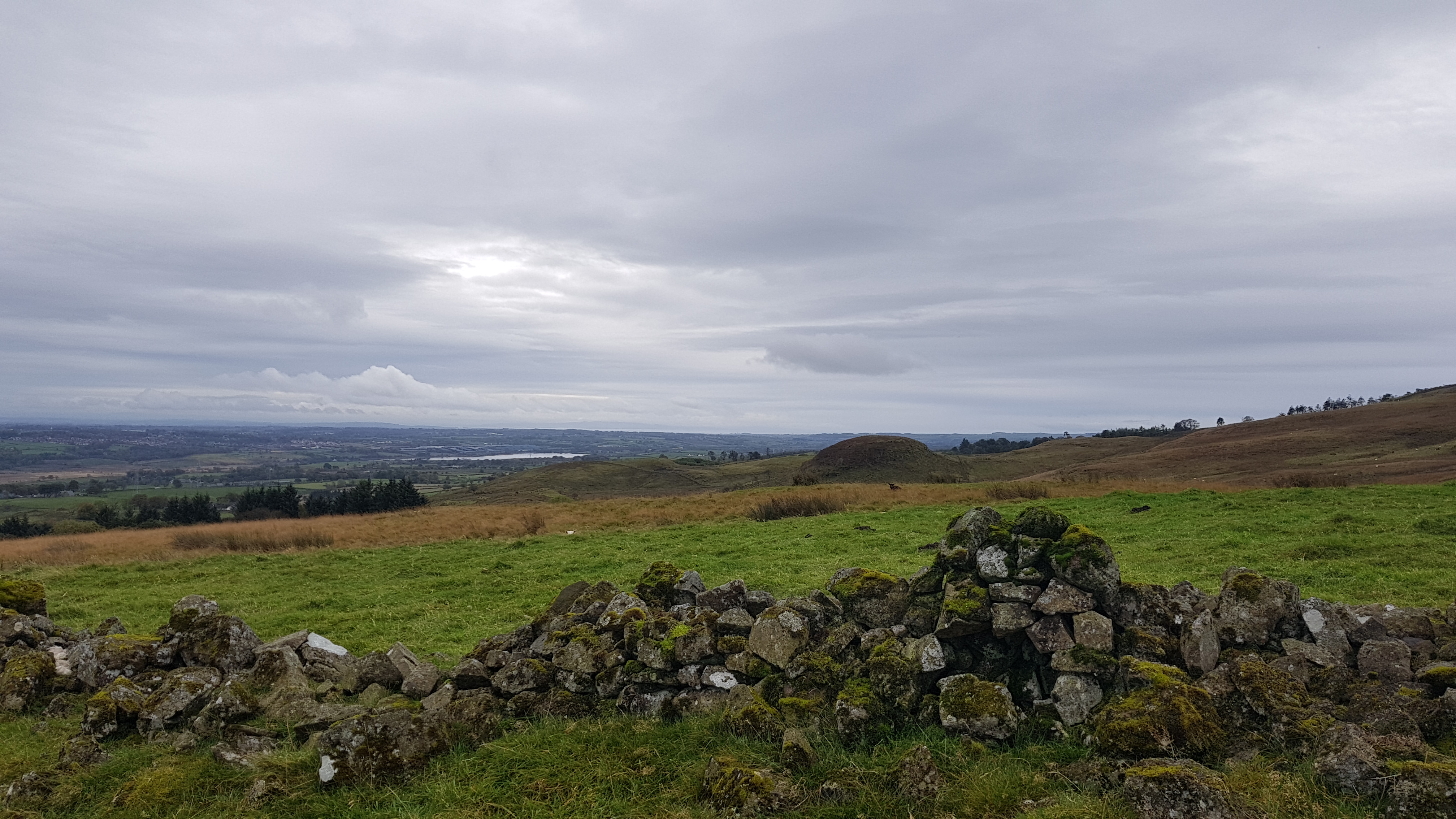 After a hard 4 hard hours on the hills, I made it back to civilization (Lochwinnoch) covered in mud from the knees down. I decided to go into the local spar and get a bottle of Lucozade, looking back it must have been quite a sight for the locals to see some slightly wild looking 17 year old boy soaking wet and covered in mud.

In conclusion, I would not say I had a pleasant time and would rate it 1/10 (Stay as far away as possible). I may go back up one day the Clyde Muirshiel Regional Park visitor center and head up to the abandoned mines there as apparently it actually has a proper path, but won't be for a long time.

Hill of Stake is the nearest marilyn to me too, when I'm back in Greenock for the summer. Not climbed it yet but from past experience, Clyde Muirshiel can only be described as an enormous sponge. Think that's the main reason it doesn't get many visitors! I'll definitely be taking the wellies when I venture up the 522m. Hope you conquer it one day!

I conquered the Stake from near Largs earlier in the year. Don't give up on it though, as I quite enjoyed the summit views when I got there. Just wait till winter, when with any luck the ground might be frozen over

I conquered the Stake from near Largs earlier in the year. Don't give up on it though, as I quite enjoyed the summit views when I got there. Just wait till winter, when with any luck the ground might be frozen over