Wee Jimbo and Big Jesper had been planning to spread their wings further afield and so, the time came for our first overnight outing. The far north was our destination, hoping to take in the four most northerly Munro's, on a two night trip and having Lawrence along, to look after us young chappies. The plan was to overnight at the Inchnadamph Lodge, do Conival and Ben Mor Assynt, the next day, then move on to the Crask Inn. After a night there, do Ben Hope, then Ben Klibreck, the motor on home. Only downside appeared to be the 6 hour drive each way, but hey-ho, who's complaining at a day away from the wumin, as the other lads said Early view through to Conival from hostel, while I wait for the others to come round :)

The trip north went well, no major hiccups and we got to Inchnadamph, early evening. It was Charles' and I, first time hosteling, but we were quite happy with our bunks, in a room for 8, at cost of £20 for the night. Our plans to dine local took a bit of a jolt, when we were advised the Inchnadamph Hotel, may, or may not be serving food, however perhaps the additional advice, to buy a pint, or two before asking for the menu, worked in our favour and we were soon tucking into a fine meal. It was really good and we enjoyed a few more pints after, just to show our appreciation On our return to the Lodge, we joined a few other lads and lady for some socialising. It only seemed right for Jasper and Lawrence, to be very sociable, digging out a nice bottle of malt each, for the company. I felt rather miserly, with my pathetic contribution to the bar, but being the driver perhaps influenced my modest supply. Enjoyed some banter with a couple of vets (not the Viet, type) and lad walking umpteen miles from down south. A retreat to the dorm for more stock, found we had company of two others, to our surprise and subsequent annoyance. Snoring is a hellish affliction, isn't it Early view back to Quinag.

Anyway, the banter was good till the wee hours, as most of the malt evaporated into thin air, apparently. Unfortunately, I wasn't there to fully witness this miraculous event, having retired a wee bit early, knowing I couldn't keep up with these two, if I was carrying a large hangover with me. Unfortunately, my plans for a good sleep were disturbed by thunderous German snoring for much of the night. Even loud retorts to "shut up" and "be quiet," went unheeded, but morning comes, as it always does. Unfortunately, my morning came, about an hour earlier than Lawrence's and at least a couple of hours earlier than Big Jasper's, as our plans for an early take off to evade bad weather, gradually slipped back Through to a broody looking Conival, still dry at this point.

Eventually we got ourselves pulled the gether and set off, dark clouds beginning to loom ominously, though we could sometime see Conival pop through cloud and mist from time to time. Progress along Gleann Dubh, was quite pleasant for most of us, though one person seemed to be hanging back for some reason. I wonder why

It didn't seem to take too long to pass the branch off to the Traligill Caves, till the hike began to steepen considerably, but on the return, this stretch seemed considerably longer! 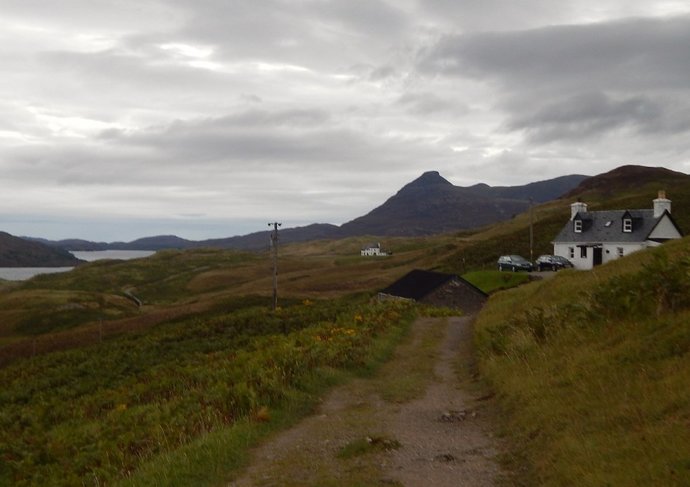 The climb up the side of the burn was quite (very) boggy in places, but gradually views began to open up, or they would have, had sheets of rain, not began to head our way, from the SW, as the wind also moved up the gears, from 1st, into top, just as we were nearing the hanging valley, beneath the bealach. It soon became apparent, the forecast pooh, was indeed going to be and there was no other option but, to get on the waterproofs. Alas, at this moment I was to cause much consternation, when pulling on leggings, as my shoulder near dislocated, or at least that's what it felt like to me. The other lads were quite perplexed at my near outflowing of tears, till I could explain what was up. 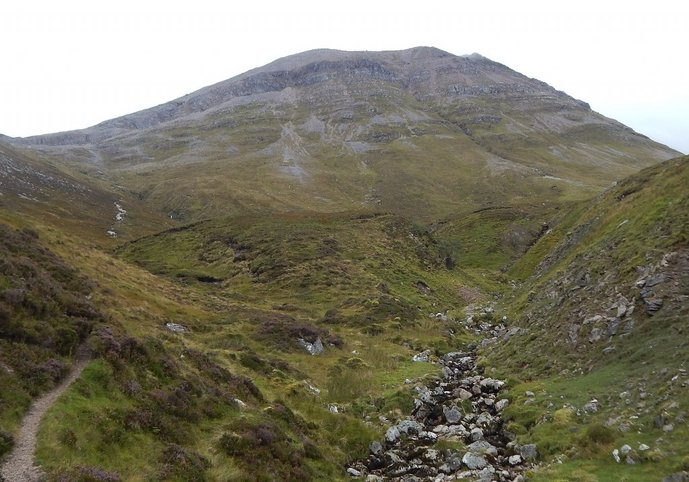 Near the bottom slopes of Conival. Still dry! SW to Cul Mhor, Cul Beag and Stac Pollaidh, among others. Lawrence, eyeing up the job ahead. Still dry!

Much to my and am sure, the others relief, the excruciating pain gradually began to subside, now able to move again and get my gear on, with a bit of assistance. I've had the odd similar twinge, extending the arm, where it didn't want to be extended, but this was far and away, the worst. Anyway, it continued to settle and I was able to re-assure the boys it would hopefully not be a problem. By now vis and the weather was very poor, but there was a fairly good track to follow and we had no problems continuing upwards and on to the summit, aside from trying to see ahead, due to the driving wind and rain. It was pretty woeful, so no point lingering here, aside from a quick photo to mark the occasion. Despite the weather there was little debate about continuing onwards. Alas, what could have been a magnificent ridge walk, proved little more than a wet, miserable trudge, till we made it to the second summit, Ben More Assynt. There's a couple of pointy bits here, so we covered our options, by visiting all, one of which provided a great shelter from the elements, allowing us to stuff some grub and fluids down our throats, replenishing some lost the previous evening, no doubt. The return journey was unremarkable, aside from the growing sensation of cold and damp, splashing through boggy bits heading back to the glen. On reaching the turn off to the caves, Lawrence and I decided to go for a nosey, whereas Big Jasper, still suffering mildly, decided caves were not for him. Unfortunately, we didn't find much to get excited about at the caves, though we didn't feel much like venturing deeper to see what could be seen. Maybe another day. Bit of a wasted half hour. Never mind. Eventually got back to Inchnadamph, in about 5 hours 50 mins, including our wee diversion. Quickly we changed out the gear and got loaded up for the second part of our trip. Crask Inn, Ben Hope and Ben Klibreck, here we come 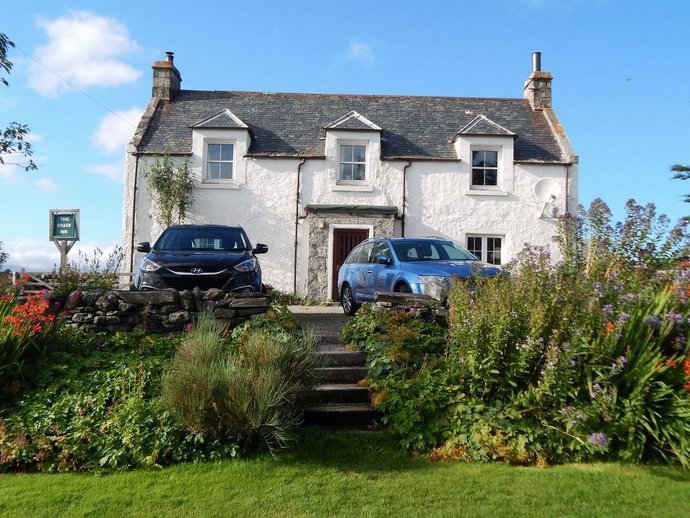 Fresh, but dry at our new abode, the Crask Inn. Big Jasper, toasts a succesful, if wet and windy first day, amid some of our gear, strewn around the fireside. Somewhere over the rainbow ..... Ben More Assynt and Conival.