Conival, Ben More Assynt and a right good soaking, were in the bag, but it was time to say good-bye to Inchnadamph and head for our new base, The Crask Inn, with the aim of doing Ben's Hope and Klibreck, the following day. Can't remember precisely, though think it took about an hour and a quarter, or so to wind round the single track roads to get there, just as the skies cleared a bit and stiff breeze got up. Perfect for getting the gear dried off on the drying green, if it didn't blow away

As well as that, mine host, Douglas, was most accommodating and allowed us to spread other bits and pieces around the very welcoming fire-place and in the genny-room. 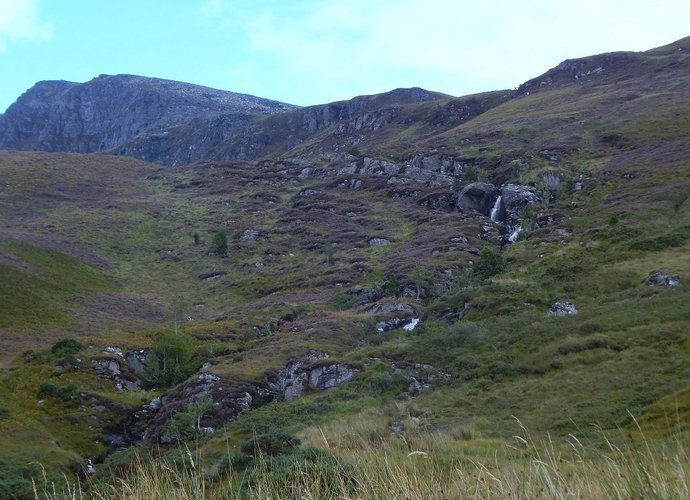 Some of the initial ascent from the car park. 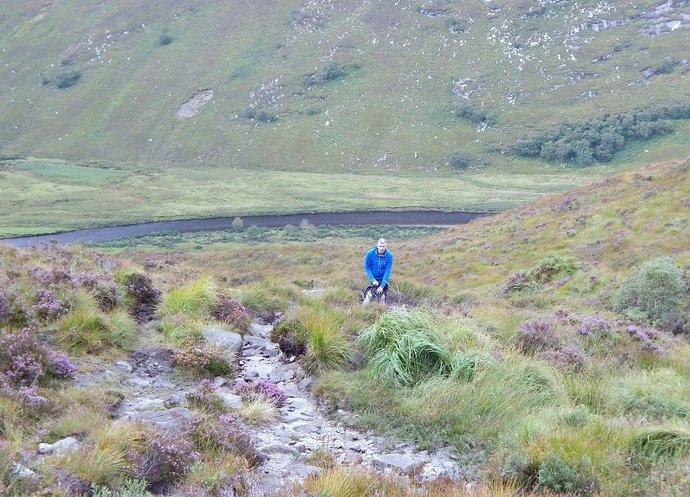 Big Jasper, bringing up the rear, on the ascent from the car park, at Ben Hope.

After a good shower, we made ourselves at home in the bar, the boys trying a bit of beer therapy pre dinner, while I availed myself of the opportunity of a bit of spiritual therapy

For a wee, remote place, there were quite a good number of folk dropping in for a coffee, cake, or pint, among them, half a dozen guys, camping on the lawn for the night, en route between John O'Groats to Land's End. 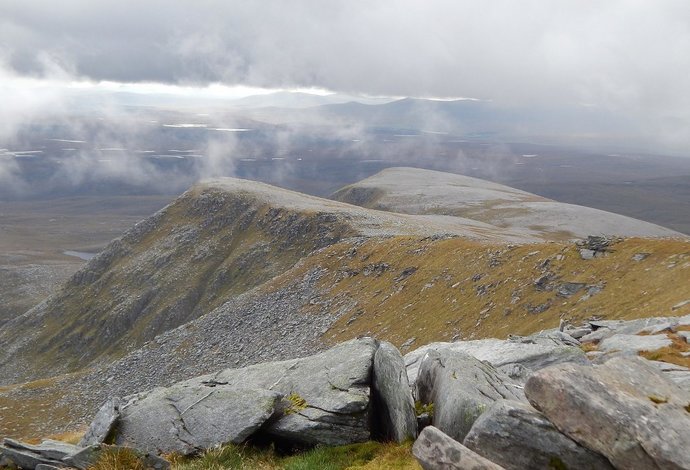 Corries to the east.

Dinner was a bit different from usual, with an excellent, fixed, three course meal, taken post-grace, which was thoroughly devoured by ourselves and the cyclists, before retiring to the bar, for similar socialising to the night before. Well, actually, the driver was once again, the more restrained, despite all temptation placed in his way. The other pair made good my deficit. When will they learn 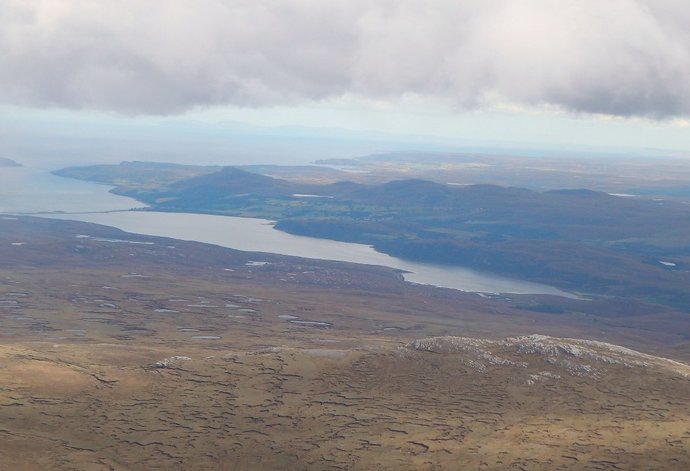 Over a few peat bogs to Tongue. Some of Orkney Islands in distance?

After a fine breakfast, we saw the cyclists on their way, once we had divied out the heaps of dried clothing, boots, gloves, etc to their rightful ..... or, wrongful owners

The journey round to Ben Hope takes a wee while, the single track road, changing to just about single bicycle width, beyond Altnaharra. One wouldn't wish to meet too many cars going in the opposite direction on this stretch, as passing places are very few and very far, between! 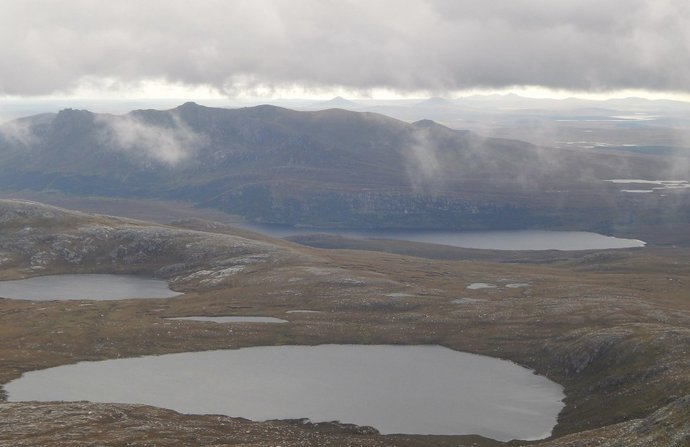 Lochs to the east of Hope.

Anyway, enough bleathers about roads. Much to my surprise there were already a few cars in the carpark, when we got to Ben Hope. We soon passed several couples, as we made the initial steep hike, up by some nice waterfalls, although the young fella seemed more happy to keep pace with the stragglers for some reason

After this stretch, the route was very squelchy for quite some distance, gradually becoming more stony as one gets onto the broad ridge, which seemed to feature many a false summit. If I remember rightly, the start height is not much above sea level, so despite not being the highest, it was still quite a tough wee hike to the summit, which unfortunately, seemed to attract some cloud, as well as cold, stiff breeze, as we arrived. 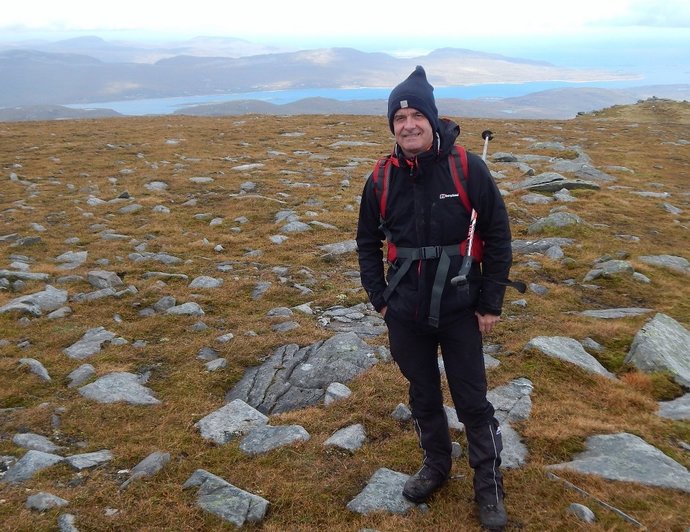 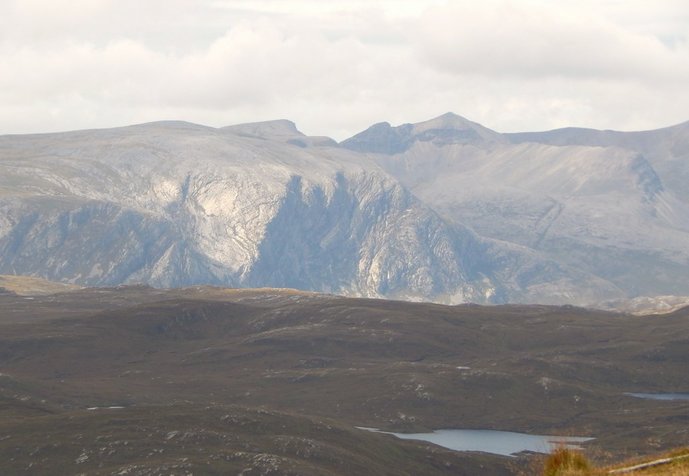 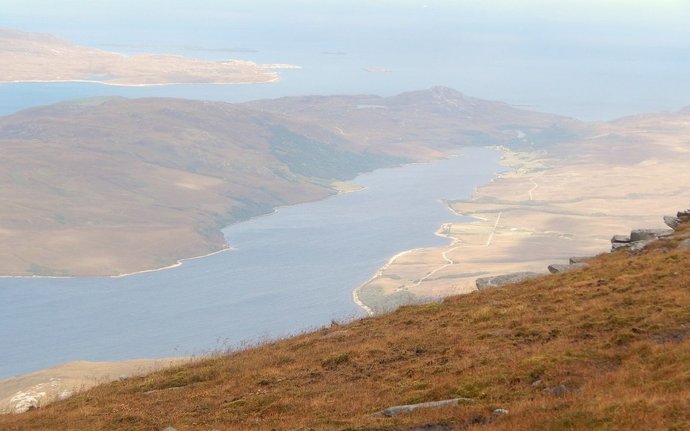 Looking down on Loch Hope.

At least it was drier and brighter than our soaking the day before,as we managed a few photo's, food and fluids before setting off on our way down, ever remembering that we had another Munro and six hour trip home to face. We were back down the bottom, in just under the three hours, joined now by another half dozen or so, cars. Busy place for a September Tuesday, we thought. 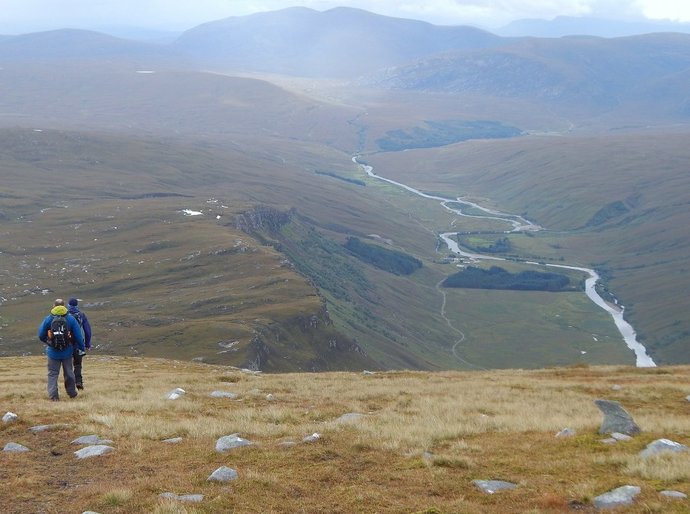 Looking down on Strath More and Creag Rhiabhach. Ben Hee, in the distance. 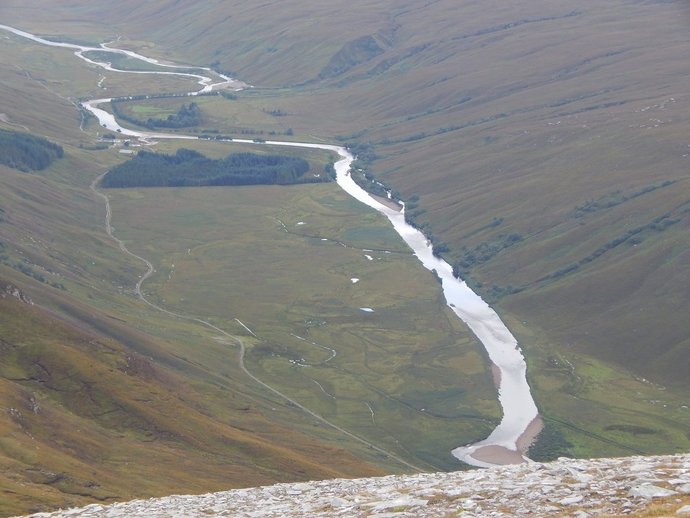 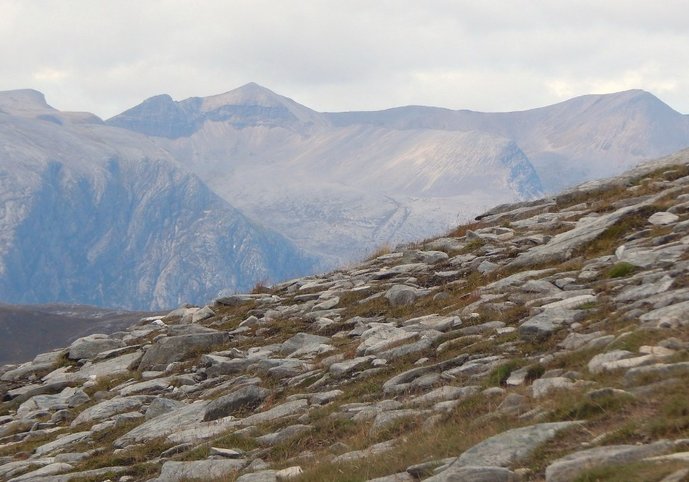 Fortunately, as on the way in, no cars encountered on the narrow stretch, as we deliberated whether to tackle Klibreck, via Loch nan Uan. The vets had suggested otherwise, due to bogs and steep climb up to the ridge, hence we opted to tackle it from Vagastie Bridge. There seemed to be a distinct lack of enthusiasm, as the lads got togged up, ready to go once again. Before long my legs felt like jelly as we splashed most of the way up to Cnoc Sgriodan, trying to keep up with Lawrence and not helped by the earlier blast up Ben Hope

Much to my chagrin, there is quite a drop and several peat bogs to negotiate, before the welcome, easier going, along the ridge above Loch nan Uan. It certainly would have been a steep ascent for my wee legs, up this way. 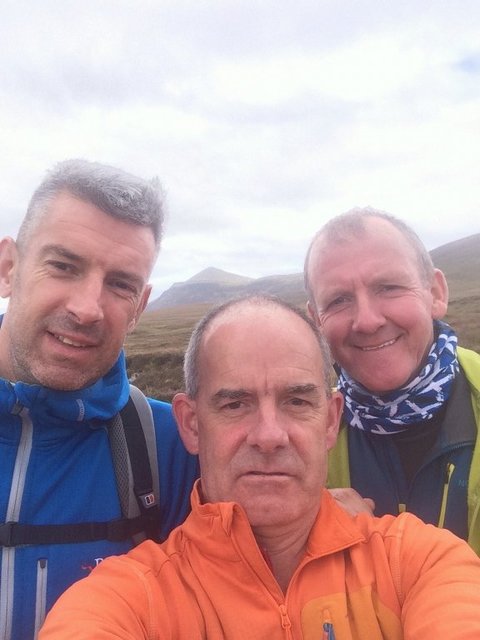 The lads, suited and booted, just about raise a smile before tackling Klibreck. 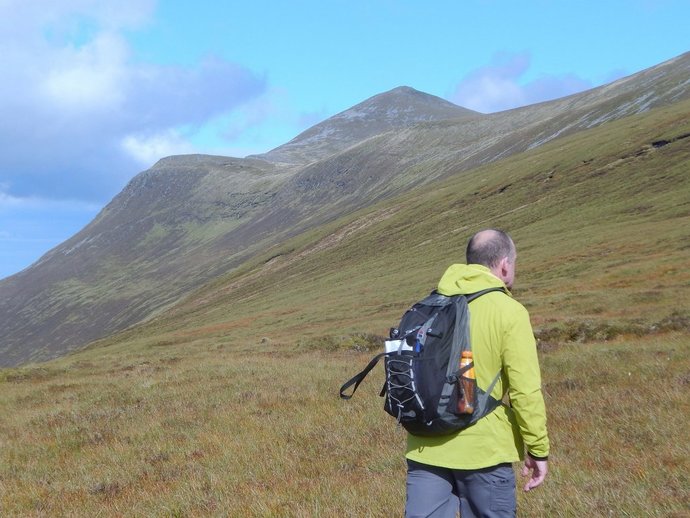 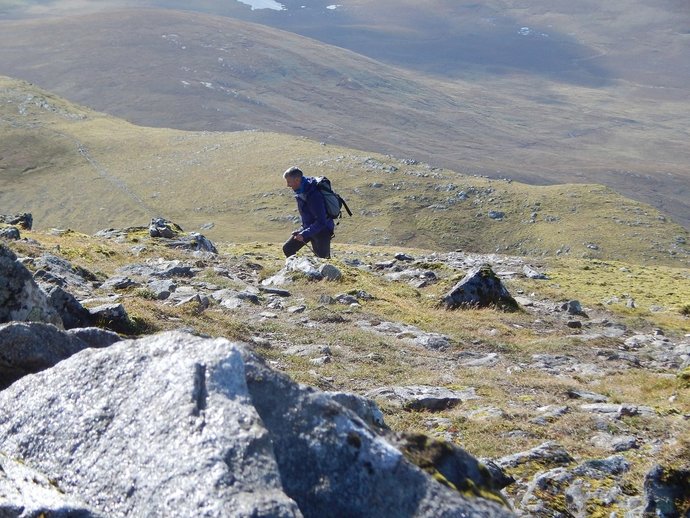 Batteries slightly re-charged, it didn't take us too long to make the last ascent up Meall nan Con, as it is called, with Big Jasper staying rear gunner much of the way for some reason

We enjoyed the clearest views of the trip, toward the spectacular looking, Ben Loyal, although it was still pretty cold and breezy. No time to hang around, so after some grub and photo's we beat a fairly rapid descent, past a few others we'd met the day before, back to the car in just over the four hour mark. 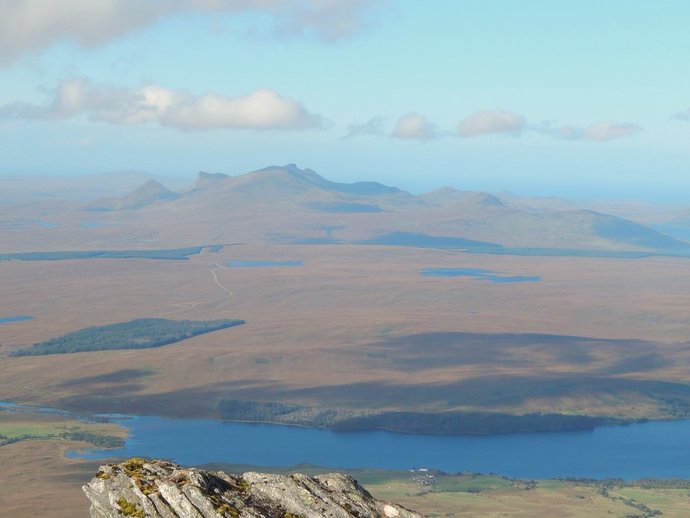 View over Loch Naver and Altnaharra, to Ben Loyal. 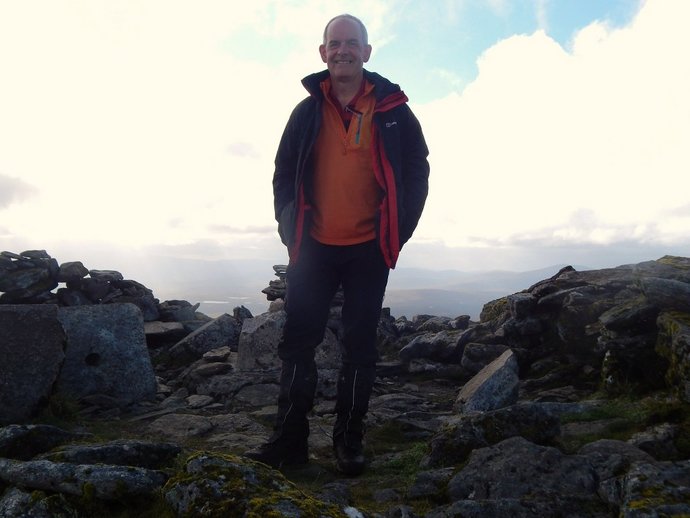 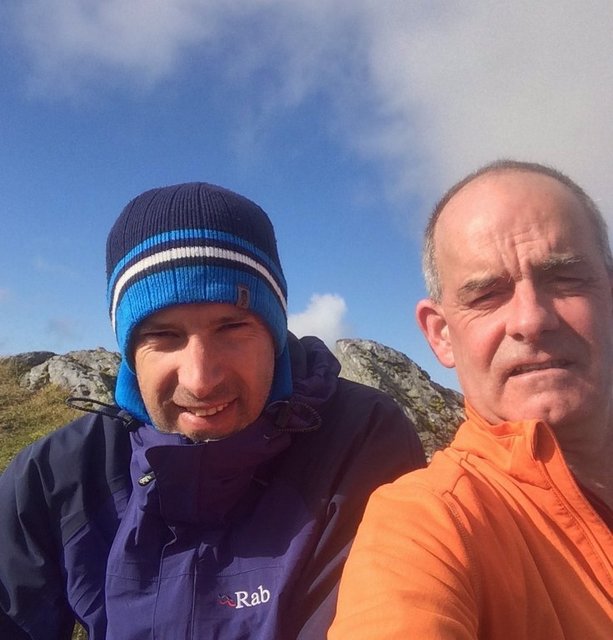 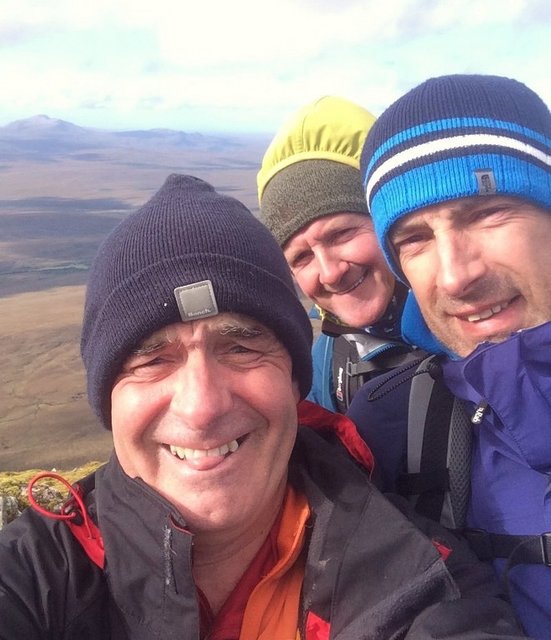 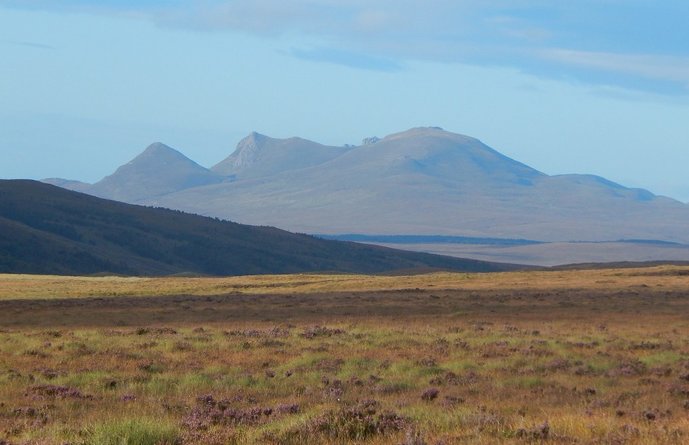 So, our fantastic, wee trip was complete, aside from a quick pit-stop to the Crask Inn, for coffee and scones, then a six hour journey home, but well pleased with the great fun, company and hikes. 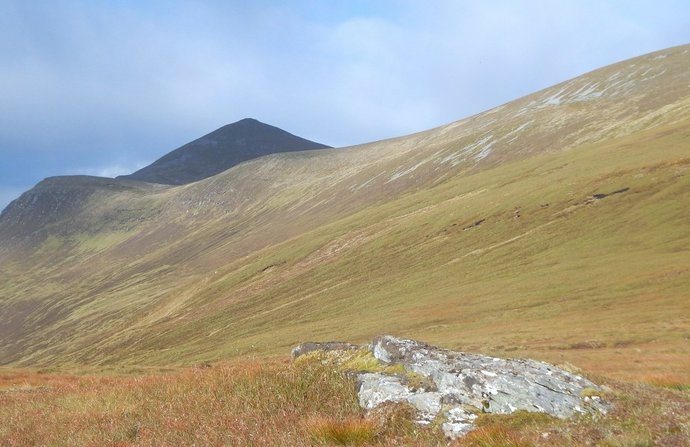 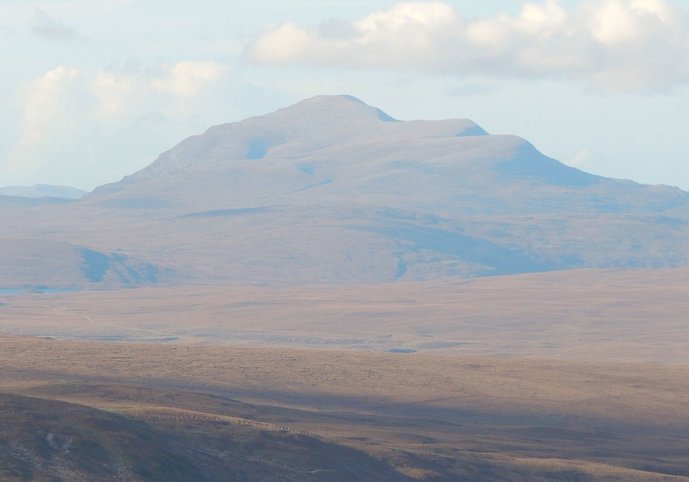 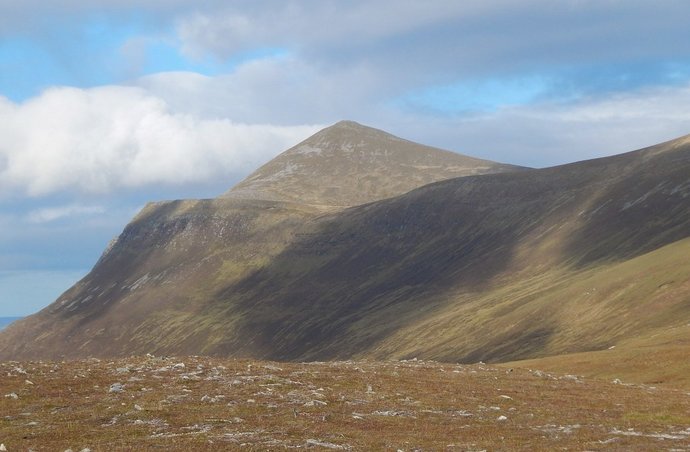 Ben Klibreck. Path along the side, perhaps more visible in this shot. 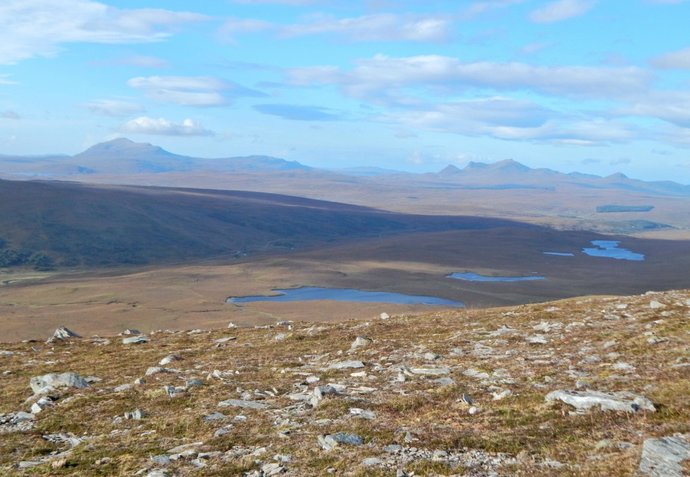 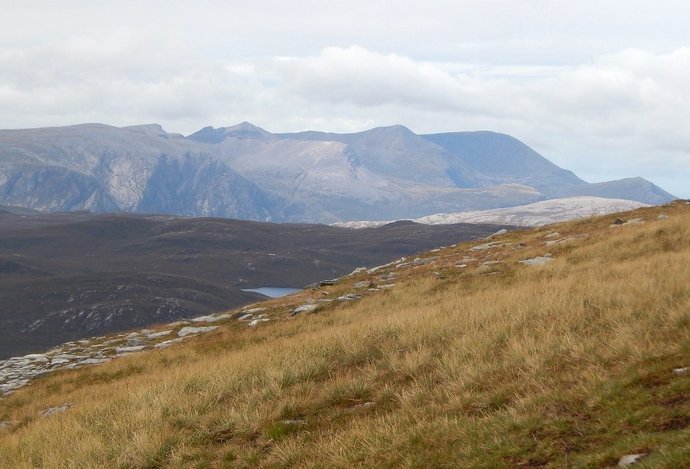