Not my finest hour(s)

Not my finest hour(s)


17 km by bike and 15 km on foot.
Just writing this report so it may help anyone else who is thinking of approaching these hills from the east.
Much planning for this, studying maps and aerial photos on Bing (excellent resource, highly recommended), advice from McMole and discussion with my son, the latter delegated to be my point of contact for the days I would be in Galloway. A route was decided. 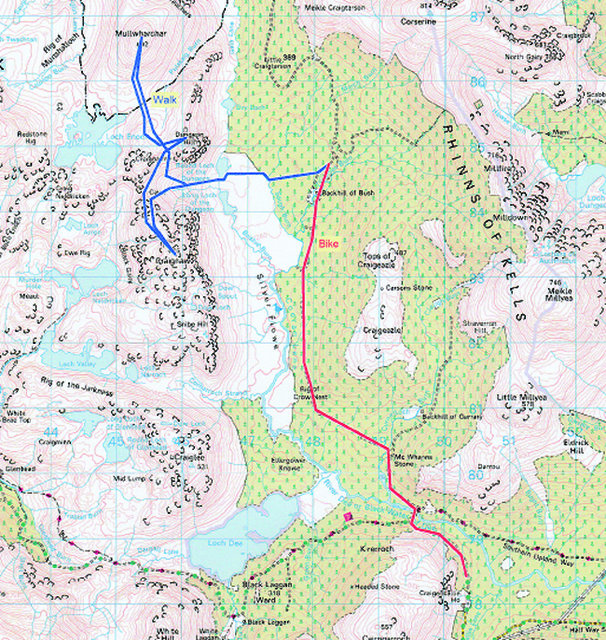 The plan as shown on the map above - after leaving the car at the end of the public road just past Craigencaillie House, cycle approx 8.5 km north on the forest track, leave the bike. Walk west to cross 'the bog' then up on the col just south of Dungeon Hill, south to Craignaw, then retrace towards Craignairney and Dungeon Hill, on to Mullwharchar and then back to the col between Craignairney and Dungeon Hill to regain my route of ascent and the bike. The day was a success in that I 'summitted' the three Donalds, but was not without incident.
First of all, timber operations are ongoing; I heard machinery but never saw anyone, although logs were stacked each side of the track at two locations (with accompanying hard hat/no access signs). I left the main forest track at NX483849, followed a side track then left the bike by two spruce trees. One ditch to cross then on to a small (deer?) track, still heading in the right direction. Just before the fence I crossed the most AWFUL tussock area I have ever encountered - almost waist-high tussocks with dark pools between. I had been concerned about crossing the Saugh Burn, but found an easy crossing point where I could gauge the depth over a shingle bed. The next damp area was crossed easily following another deer track, round the south end of the Round Loch of the Dungeon and up on to the col.
Comfortable going along to Craignaw, back to the cairn and then contoured round and up to Dungeon Hill and finally on to Mullwharchar.
So far so good - but not for much longer! Now 100% cloud over Mullwharchar, heading off the hill

The problem started with a really slow descent from the col between Craignairney and Dungeon Hill. The slope had looked ok on the way up but my descent (with one very old knee and one very much younger) was difficult with copious boulders and tussocks (again). As I made it back to the Round Loch, the light was beginning to go ..................... I tried to send a txt to my son to say I was off the hill. (I knew there was no signal at the time but hoped there would soon be a connection somewhere off to the east.)
Crossing the bog (small tussocks and fading light) was ok, across the stream - and then the man-eating tussocks. By now it was too dark to make out the water and deep holes. At one stage I sank below the tussocks and, as I fought my way out, briefly wondered if the top of my head was a large enough target to register on the thermal imaging in a rescue helicopter! Finally I regained the small path at the edge of the felled area where my head torch (Petzel with new batteries) ably picked out the way ahead.
So back to the bike .............. the back brakes had jammed and I couldn't fix them, so decided the fastest way to get back would be to undo the callipers. That freed the back wheel - but again slowed my return to the car. The track is good, but I was very wary of going at all fast in case I had to brake suddenly, risking a somersault over the handlebars.
By now I knew I was going to be very late. Clear skies and no wind. The night was black although lit by thousands of stars; this area is a superb 'Dark Sky Park' but I couldn't delay to appreciate it. Finally it was with some relief that the white of the car showed up at the end of the road.
I dismantled the bike as quickly as I could, stowed it in the car, and was about to drive off when, horror of horrors, I saw car headlights approaching fast up the road towards me. With a sinking feeling, I knew my son had raised an 'overdue person' shout. The two young police oficers (they're all young when you're as old as I am!) were brilliant - they kept asking if I was alright and I kept apologising. Just mortified.
So, I have very mixed feelings about this day. On one hand I was pleased to have completed the challenging round; on the other hand, I very much regret that my lateness caused concern.

Would I recommend this route? Probably yes - provided no timber operations, long daylight/a good torch, a better way over the man-eating bog, and a bike in good order. (I had mine serviced the day after I got home.)

Wow that sounds like a bit of a nightmare

Well done for persevering and overcoming plenty of challenges

You probably saw my WR from earlier this year, these hills should not be underestimated and by the sounds of it no matter what direction you attack them from. Not only are they remote but the terrain is anything but walker friendly.

Had a look to see what Donalds you have left and could only see one & I have to be the bearer of bad news, Cauldcleuch Head - is far from exciting

I always read reports of these 3 hills with interest, as they get a pretty bad press for being tough.......which I won't deny they are. I approached them from Loch Trool, taking in Benyellary and Merrick too. Despite the extra climbing I'm convinced it made an easier all round circuit.

As for the police.......at least you had someone concerned looking out for you and better they show up and there's no major incident to deal with.