An invite from my cousin to go up to Glencoe could not be ignored as i wanted to do the buachaille since last year when i walked the west highland way. We set off knowing it was going to be a dry sunny day, but never sure of the amount of cloud up top. Sure enough as we came round the bend in the road where this majestic mountain apears it was in fact covered with a huge wispy, white wig. Still I felt pretty excited about the day ahead. It was soon clear that the wind up here blows much harder than in arrochar and loch lomond where i`ve done most of my walks and i got wrapped up pretty quick. this one looks clearer !

There`s a short walk in from the car parking area (not exactly a car park with all the rocks and holes, not to mention the absence of an irratating, tempermental parking meter) over a footbridge across the river etive(?) and gradually leading you to the first initially, steep climb up through a kind of narrow corrie which is a competely different from the iconic image of this mountain. During the first twenty minutes or so i thought my thighs were going to burst but eventually after finding my rhythm and stopping for lunch an hour in i was absolutely fine. The path up is essentially a giant staircase and i imagine a lot of work has been put in on this path otherwise you`d be scrambling up through lots of scree for hours. the view behind us

Anyway as we got to this bit it was pretty obvious the cloud was here to stay and we headed off left( or east or south or something, i don`t know) for the closer and higher summit of Stob Dearg. It didn`t take us much longer to reach the summit and the path is quite clear through the boulders even in the cloud. We stopped at the top for something to eat and watched some foreign climbers who had scrambled up the "front" smoke incredibly large cigarettes before taking just the one pic as there was absolutely nothing to see from up here today. 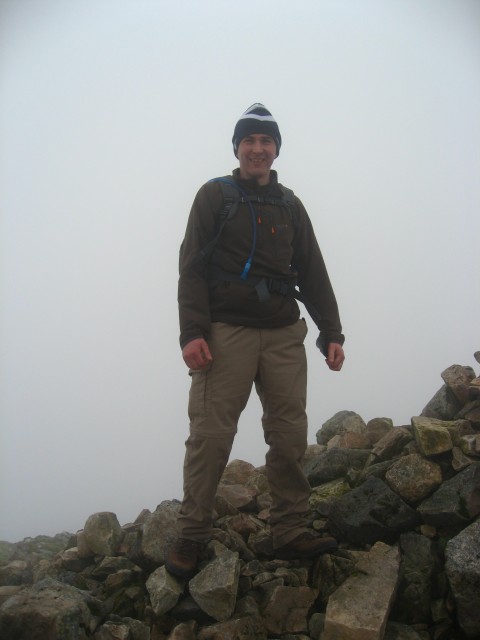 We decided to head down rather than do the other munro, but i will return and hopefully have a clearer day. NIce one tomyboy, enjoyed reading that. You got some nice atmospheric shots there.

cheers skuk, just checked out your report of this, so jealous !

good report tomyboy, atmospheric is the word - be thankful, for my last visit to both hills was a friend's topout - clag and rain from beginning to end
-