Last weekend we had a good day up on a Graham despite low cloud. This Saturday, wind forecast was dreadful, gusts 50mph on higher ground, therefore we looked for an interesting spot to ramble on lower levels. Struie Hill is less than 400m high so we hoped that winds would be bearable. Plus it's only a short drive from home so it wouldn't take us half the day to get there

The true summit of Struie is only about 130m above B9176 and we drove past so many times when heading for the hills of far north, but the whole hill is much longer, 2.5km from Struie summit (373m) and the mast on the opposite end (called Struie Hill for more confusion!). Every time I saw this prominent ridge I kept saying: one day we'll come and walk it!
The obvious way would be to start from B9176 and walk the ridge up-and-back, but we wanted to do some kind of circular, so started from Rheguile farm, where there is space to park. We visited the eastern summit first, then traversed to the summit (it's a sub'2 Marylin) and finally descended the SW shoulder back to the starting point. The whole circuit shouldn't take longer than 4 hours. We were slowed down by very strong winds and a heavy shower, but still enjoyed this half-day visit to (lower) hills!

Track_STRUIE HILL 14-10-17.gpx Open full screen  NB: Walkhighlands is not responsible for the accuracy of gpx files in users posts
Parking at Rheguile. The indicator says 3.3km to the eastern top. 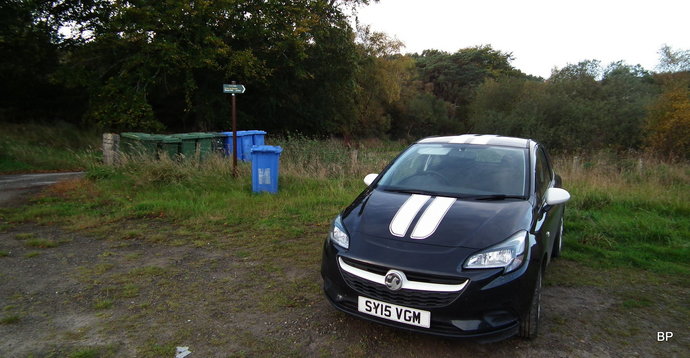 There are 3 different tracks starting from Rheguille, the easternmost one is the shortest route to Struie Hill. The target is prominent from the very first stage:

It was a bright if very windy morning and from the very start we agreed that not tackling anything higher was a good decision. It was blowy even on the low level, I dreaded to think what was happening on Munro height

But Kevin had a brand new windproof jacket, which he was eager to test in windy conditions...
Ready to go:

After 1.5km of easy walking on tarmac, we stopped for a minute to appreciate the view down to Dornoch Firth:

The good track ends at Leachonich farm. From this point, a more muddy and "untidy" track leads past a gate to the upper reaches of Struie ridge: Lovely views behind us as we gained height:

The track, after some boggy sections at the beginning, soon became dry and stony, easy walking at the moment: 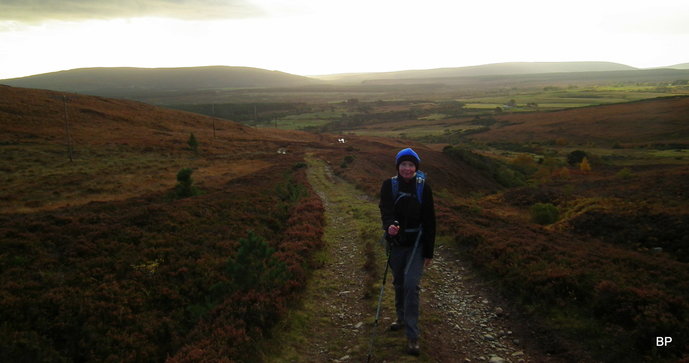 After 150m of ascent we hit the ridge. The track (more a path by now) turns right here and becomes a bit boggy again. Views were lovely indeed, but we were also hit by strong winds as we emerged on the ridge, so walking turned into staggering from side to side

Something different for a change

The final ascent to Struie Hill, the remaining part of the ridge behind me: 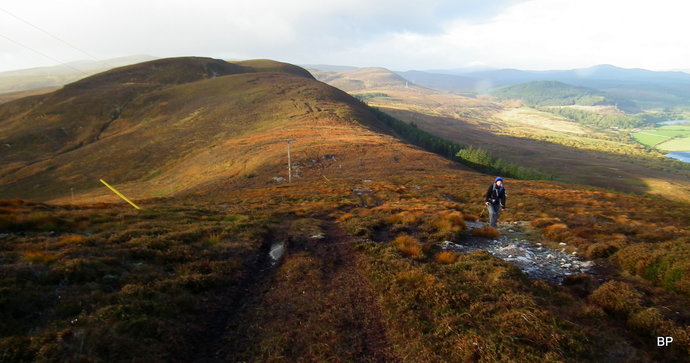 The upper Dornoch Firth from near the eastern top: 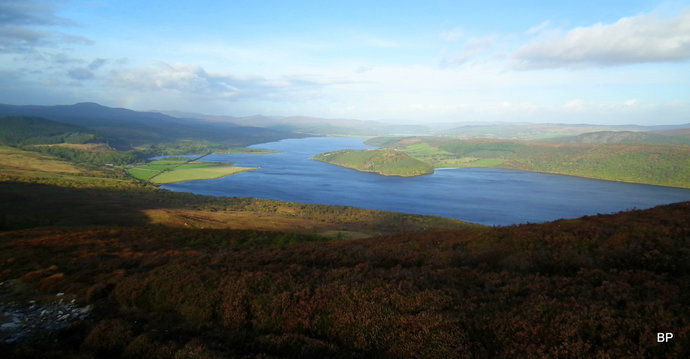 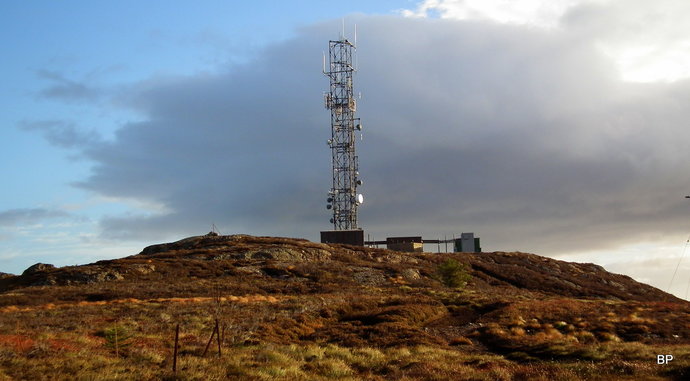 The wind was so strong we struggled to stand straight on the summit. There is a small cairn by a fence post, but it was impossible to take photos there, so we run to hide behind the maintenance buildings by the mast. Kevin peeked out from behind our shelter and snapped some photos looking west - we could definitely see a shower bearing cloud on its way! 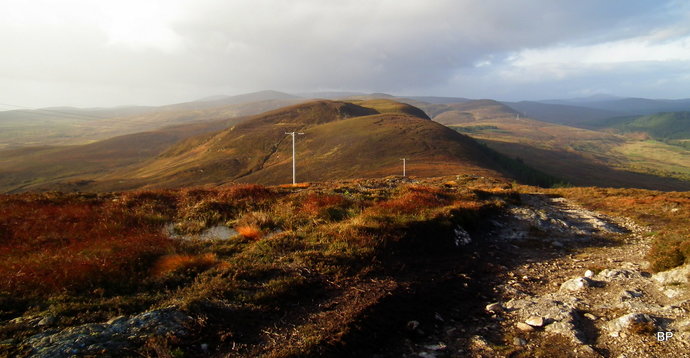 Despite the pre-Ophelia hurricane conditions, we spent some time on the eastern top, doing our best to take some decent snaps. It is an amazing viewpoint indeed and on a better day one could sit here for a long time, gazing east into the North Sea. We agreed, we'd come back here in winter conditions, if there is snow down to low level, views would be even more spectacular!
Black Panther bracing for hurricane Ophelia: 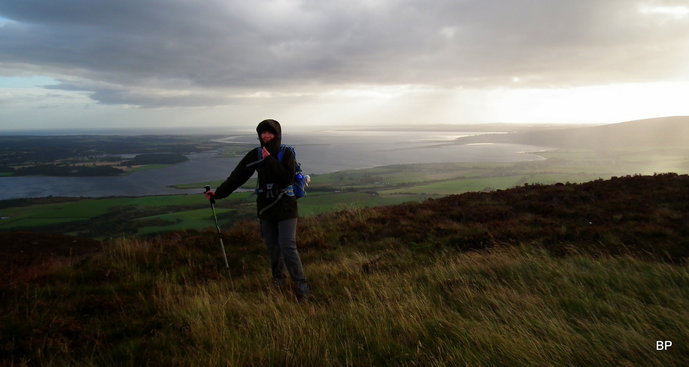 Kevin in his new windproof jacket 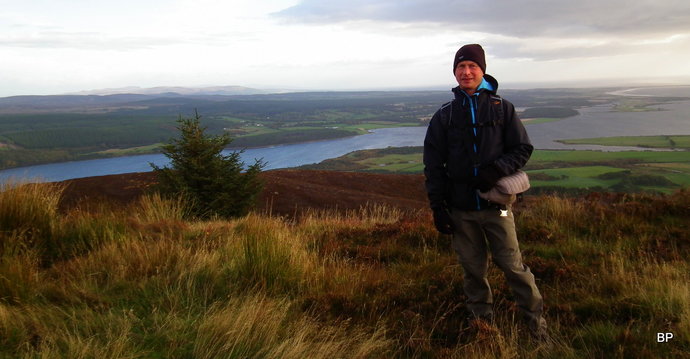 The rain was coming in but we were carrying our proper hillwalking equipment, so we were well prepared. One could laugh and ask, why bother taking "the full metal jacket" heavy rucksack on a 3-4hr stroll up an easy sub'2? Well, in this case, gaiters and waterproof trousers proved very useful!
But before the storm hit us, the pain was sweetened by a lovely rainbow over Dornoch Firth: 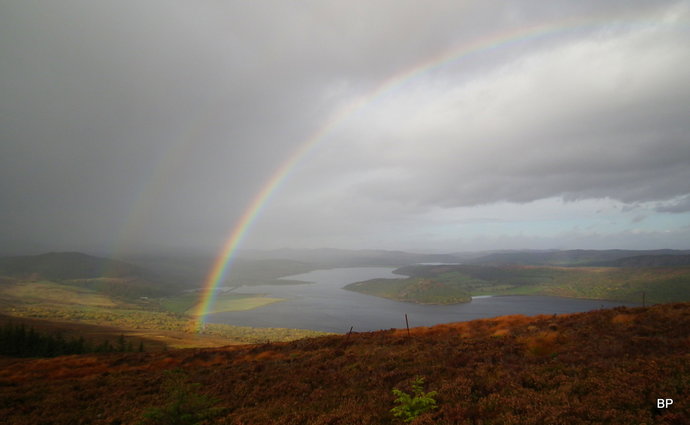 We descended to the 262m col and noticed there was an obvious if wet path ascending the next part of the ridge. The rain has arrived and hit us almost horizontally. We were walking into that rain and wind, so the next 20 minutes of climbing to the middle top (349m) was a real struggle... It's been a while since we did so much exercise on a Sub'2 hill!

We reached the middle top battered by the winds. The rain started to ease now, giving us hope that it might stop soon. We could just about see the target summit in front of us:

Thankfully, from the middle top it's almost flat walking to the true summit of Struie. The heavy shower stopped as abruptly as it appeared and when we walked the final meters to the summit cairn, we were basking in sunshine again! 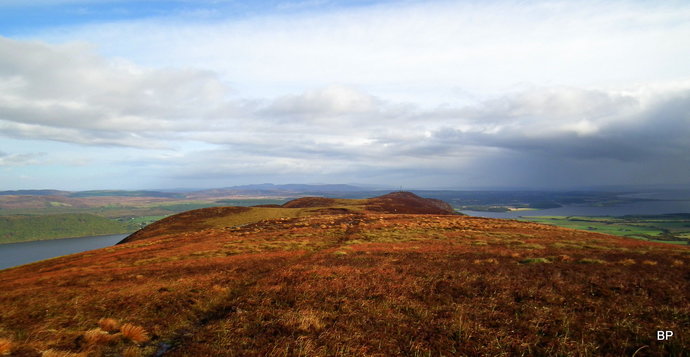 The storm we walked through, passing over to the North Sea: 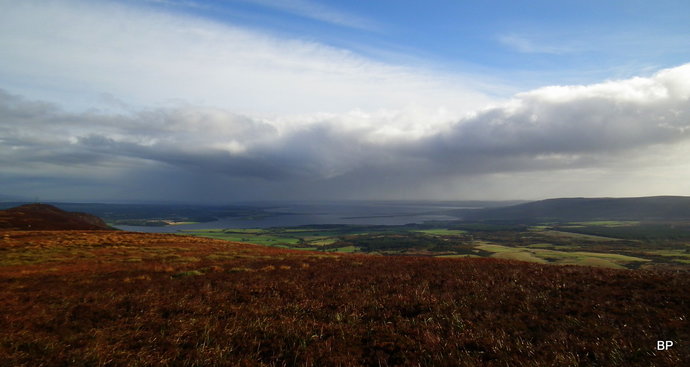 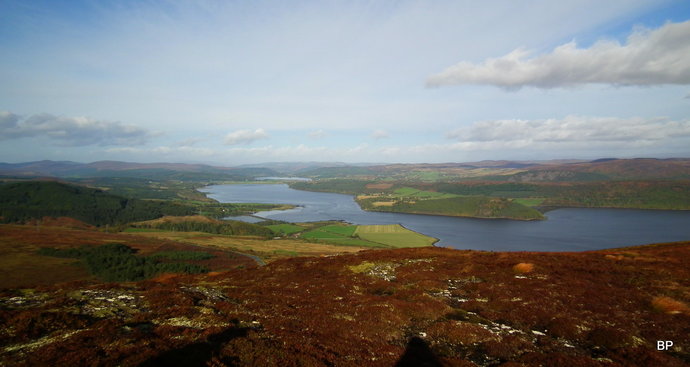 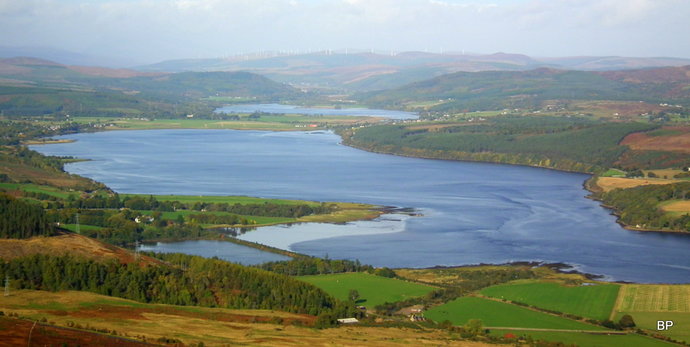 B9176 passing just below our feet... Carn Salachaidh and Carn Chunneaig on the horizon: 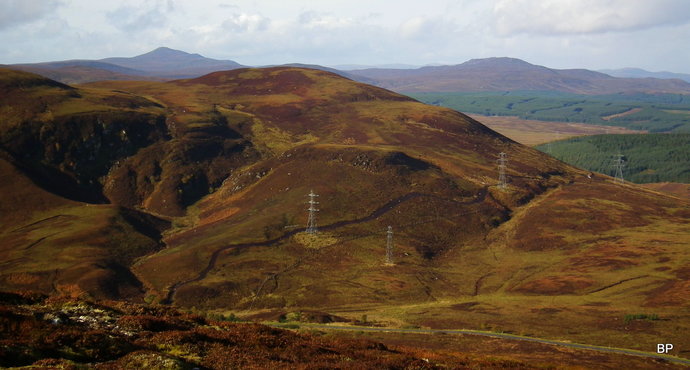 Lucy on the summit 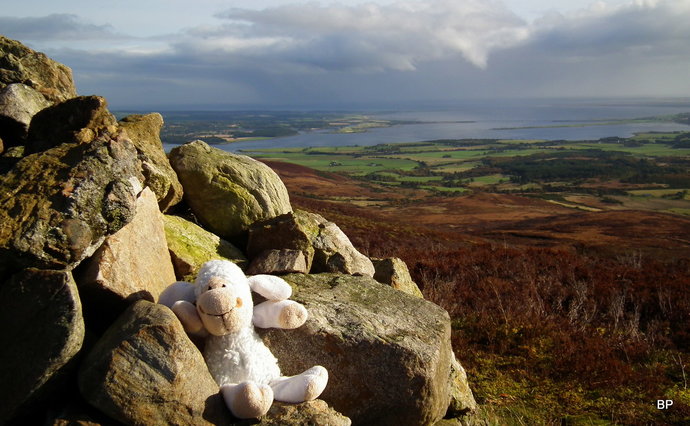 One man and his camera: My 20th Sub 2000 Marylin... Not that I'm really bothered about bagging them. Just the ones with interesting views Dornoch Firth and the ridge back to Struie Hill:

It was still very windy on the summit, so after a short photo session, we started our descent down the SW shoulder. The path marked on 1-25k map does not exist any more, so we simply picked our way down the heathery slopes - a bit wet in places but relatively easy going:

We stopped about half way down by a large rock to have a warming cup of tea, then continued down the grassy meadow to the nearest track. We crossed a stony dyke and jumped over a small stream, to find ourselves on a track just west of Polagharrie farm:

On the final stage, walking back to the car, we admired the colours of autumn around us... It is really a nice ridge, well worth a visit and a worthy viewpoint. Shame about the rain and wind, but at least the storm passed by the time we reached the summit and we could see the fantastic panoramas to the north and west. We enjoyed this mini-hurricane adventure

Hopefully, the real Ophelia will pass by us quietly and won't cause any damage... I'm not a fan of "flying bin days".
So that's all folks for now, but I'll be back for more! Great views and some atmospheric lighting. Sometimes the little ones bat well above their average!

. Always loved the views up the Dornoch Firth, and have thought that the Struie deserves more than the quick up-and-down I've given it so far....if you can stand up, that is

Mal Grey wrote:Great views and some atmospheric lighting. Sometimes the little ones bat well above their average!

Can't add anything to this - agreed wholeheartedly!

I agree this little gem deserves more than the quick up and down from the western side... Loved the experience despite foul weather.

The "wee ones" are ideal for November-December outings, when days are short. I'm thinking Torr Achilty and
Carn Faire nan Con next, but weather is looking foul for the weekend

Thanks for this. I've often thought about doing a walk around this hill so this will be an incentive to get on and do it!

Enjoyed reading this review. I'm staying in Portmahomack over Easter this year. Just me with my 15 year old son. The Struie Hill will be our first foray into hill walking leading up to an attempt on Ben Wyvis in the 2nd week.

Enjoyed your pictures too. Inspired me to make this our first hill. Looking forward to it immensely.

BP, if there are any others you'd recommend in the area as warmups to a munro, feel free to message me or post here?

Hi Garry, apologies for late answering, life caught up with me

There are many good hills in the area, WH itself has a long list of smaller and bigger lumps and bumps to climb

It all depends how fit you are and how long a day you fancy. A few suggestions for walks from me would be:

1. A good coastal warm-up is the Tarbat Ness circuit, reasonable path most of the way, loads of fun (especially for the younger one): cliffs, beaches, lighthouse, castle (private but can be admired from outside), wild birds in abundance. Great way to spend 4-5 hours if clouds are low and weather not good enough for the hills.

2. Very popular wee hill - Cnoc Fyrish, with an imposing monument on top, great viewpoint. We've been there many times. A good idea is to make a bigger circuit over Cnoc Fyrish and Cnoc Ceislein, we did that in winter and really enjoyed every minute. Ceislein is a Sub'2000 Marylin so a hill ticked off the list as a bonus

3. Beinn Tharsuinn is a local Graham, easy enough (some pathless walking and a bit wet in places, but not too bad by Scottish standards). 4-5 hours for the basic route.

4. If you don't mind driving a bit further, Carn Chuinneag is an easy Corbett: good track on access, then stalkers path to the very summit. Fantastic views. From the same starting point in Glencalvie, more ambitious but very entertaining walk along two ridges including another Beinn Tharsuinn (a Graham) and slightly shorter circuit of Carn a'Choin Dearg, also a Graham.

5. A bit further north, an easy, iconic climb to Beinn Bhraggie and Beinn Lunndaidh. The latter hill is a Sub'2000-er, rather a boggy one but views - great!

6. Another good Graham nearby is Carn Salachaidh. Great track on approach, but very overgrown with heather higher up. Long trousers required

Some interesting rocks and outcrops around the summit area.

7. One more Graham, Meall More offers superb views to the less known side of Ben Wyvis. We did it for Easter a couple of years back and really loved it (just ignore the wind turbines on Meall nan Tuirc).

There are interesting Subs in the Garve area, on our to-do list at the moment, we're especially intrigued by Carn na Dubh Choille...

I hope you have fantastic Easter time, we will be up there hillwalking as well for Easter so if you hear wild meowing from a hill summit, it might be me

PS. Fingers crossed all the links in my post work properly, I'm at odds with new technology