Nostalgic walk up Skiddaw after all these years

Nostalgic walk up Skiddaw after all these years


The first time I set foot on the hills around Keswick was when I was 14 and travelled by bus to visit friends in the village of Threlkeld. As a young couple with a toddler and another on the way I'm not sure what possessed them to invite me and my pal to come and stay - what kind folk! Sadly I lost touch with them many years ago but their names were Bob and Joan and I remember Bob was into walking. He showed us the way to walk to Keswick along the River Greta and offered to take us up Blencathra (or Saddleback as he called it) starting from the back of their house. We did set off but only being in gym shoes (remember the old black gym shoes?) I'm not sure how far we got before I went over on my ankle and we turned back.

I've returned to the area many times in the 55 years since then but never got round to climbing either Blencathra or Skiddaw. I came close to it in the early 1990s with Pete and son Doug when we walked up Ullock Pike from Bassenthwaite. I remember looking across to Skiddaw and thinking I'd like to keep going.... but we had to get back to the rest of the family so it didn't happen. On 17th July 2017 the great day finally arrived and five of us set off to climb Skiddaw. It was a bright sunny day with a refreshing breeze - perfect conditions for climbing what must be one of the Lake District's most popular fells. We expected it to be busy - and it was. By the time we arrived the car park was overflowing and cars were parked well down the road. Fortunately I'd been up for a recce the day before and had spoken to a woman manning a stall who said if there was no space to go through the gate into the field and park there, which is what we did.

It's an excellent path from the start, the first part being a section of the Cumbria Way. On the old path, Helvellyn range to the south east We followed the old grassy path up by the fence as it gave a pleasant break from the gravel and stones of the new path. After a busy morning then leaving before we'd had lunch it didn't take long for us to want to stop for something to eat - and what better place to sit down than on this grassy hillside. I have never seen a path of this quality or width nearing the top of any Scottish Munro!

Bypassing Little Man which Jonny and I climbed on the descent On the way up I got chatting to a couple with a dog who come every year to climb the fells and said what a great hill Blencathra is. So Blencathra's next on my list - started a mere 55 years ago from Threlkeld!

Blencathra and Lonscale Fell from the gate and stile Over Long Side Edge to the north western fells 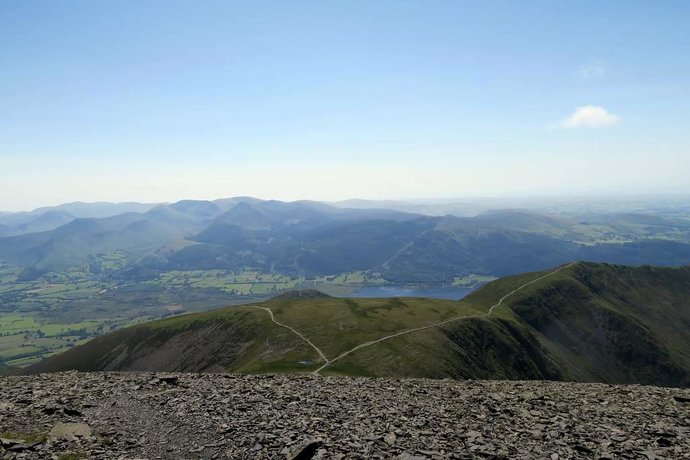 The wind at the top was strong enough for us all to huddle into the wind shelter and when another man appeared we shoved up to make a space for him. We got chatting about hills, as you do, and unlike me he'd been up Skiddaw many times. His accent was south of England so imagine my surprise when he said he came from Dundee and knew a whole string of folk I know. He offered to take a photo of us at the summit plaque.

This plaque was installed in 1977 to mark the Queen's Silver Jubilee. In January 2017 some sad individuals tried to destroy it but within a week five fell walkers went up to repair it. They found the solid steel plate lying a short distance away and managed to get it back on to its plinth and positioned correctly for the locations it points to. From what I could see they had done a good job.

All of us at the plaque 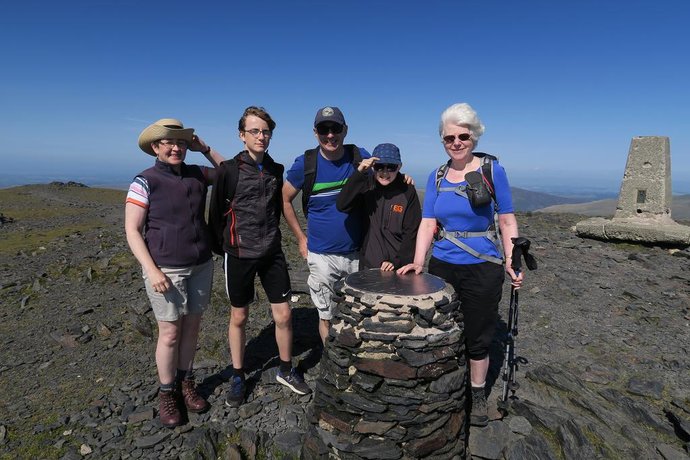 Isabel who had climbed Skiddaw before wasn't wanting to include the ascent of Little Man so James and Katie accompanied her back the way we had come while Jonny and I nipped up and for all the extra effort it was, it was well worth it. The views of Keswick and to the south are better than from the higher top. He and his three brothers, mum and dad were camping in a farmer's field near a church and we could just make out their tent. Looking back to Skiddaw from Little Man 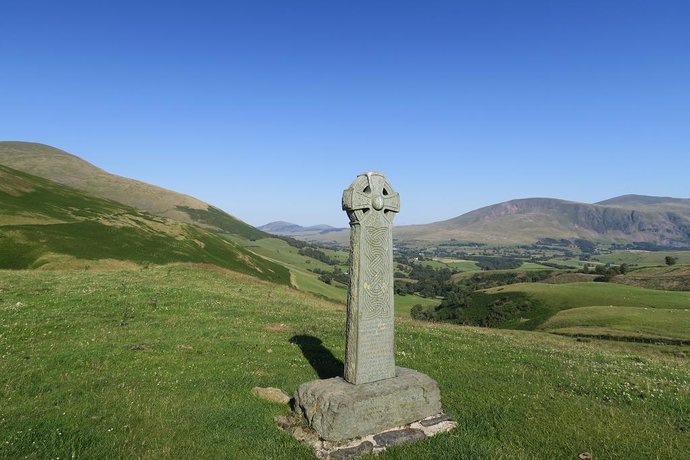 Beneath the Celtic cross, the shaft of the stone depicts an endless knot then the inscription:

The monument includes a third name, Robert Walker Hawell (1851–1911) which was added later.

Surprisingly I was first back to the car closely followed by Jonny. James and Katie arrived a few minutes later but there was no sign of Isabel. She was last seen scanning the hillside for her son and pals who had done the ascent on their bikes and she was anxious to see them safely down. Eventually they appeared at the top of the old path which they hurtled down and which Isabel captured on her phone. They were young lads (oldest 15) but well equipped and seemed to know what they were doing. But for all that one mum was relieved to see them down all in one piece. I think we got the best of the summer that week in Keswick because the next day was just as sunny and even warmer. So Pete and I headed for the lake to take a boat trip - along with several hundred others. Re: Nostalgic walk up Skiddaw after all these years

There's something special about revisiting favourite hills with the next generation, isn't there? I'm now doing this with my grandkids. Just wonderful.

You certainly had fabulous weather for your walk, so some great views and pics. I particularly like the one of Skiddaw taken across Derwent Water, which I think really makes the case that it's not just a boring lump. I'd written it off as such for decades, and was only motivated to do it for the first time earlier this year as a consequence of viewing it from Helvellyn on a similarly perfect day.

Re: Nostalgic walk up Skiddaw after all these years

Alteknacker wrote:There's something special about revisiting favourite hills with the next generation, isn't there? I'm now doing this with my grandkids. Just wonderful.

You certainly had fabulous weather for your walk, so some great views and pics. I particularly like the one of Skiddaw taken across Derwent Water, which I think really makes the case that it's not just a boring lump. I'd written it off as such for decades, and was only motivated to do it for the first time earlier this year as a consequence of viewing it from Helvellyn on a similarly perfect day.

Blencathra top of the list for next time we're back!